Plovdiv…. a tale of three hills 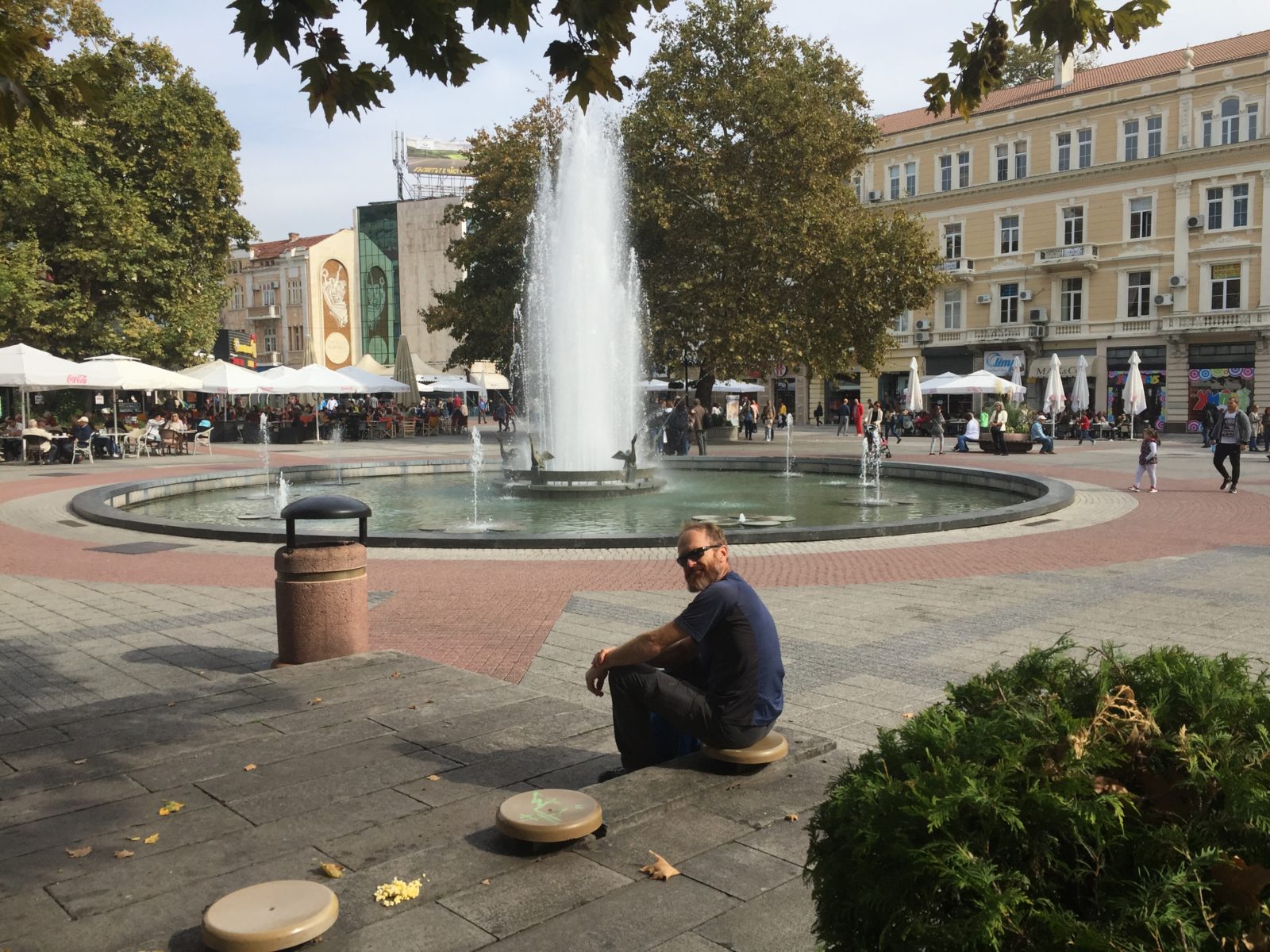 The outskirts of most villages, towns and cities aren’t the best looking bits – this generally goes for the UK as much as with anywhere we have been recently. We have learned that it’s best to wait a while before making any judgement on a place and Plovdiv was a very good case in point. To be honest the sprawling outskirts are bit of a howler as we found entering from the north, with lots of industry and not-so-nice communist era tower blocks. However after a bit of exploration we’ve found that the central Old Town and the adjacent Kapana (creative district) are really nice. Systematisation didn’t happen in Bulgaria from what we can tell, so instead of knocking old bits of the country down as they did in Romania, the communists here just built housing blocks on the outskirts and wherever they could fit them in, so the older parts have generally survived.

Plovdiv has been chosen as the European city of culture 2019, so there isn’t lots to see and do. Between our digs and the centre of town is Damov Hill, which after a short climb takes you to a clock tower and great views over the city. We were the only ones up there early on Saturday morning, which was nice, so for a while we just looked around us and took it all in. 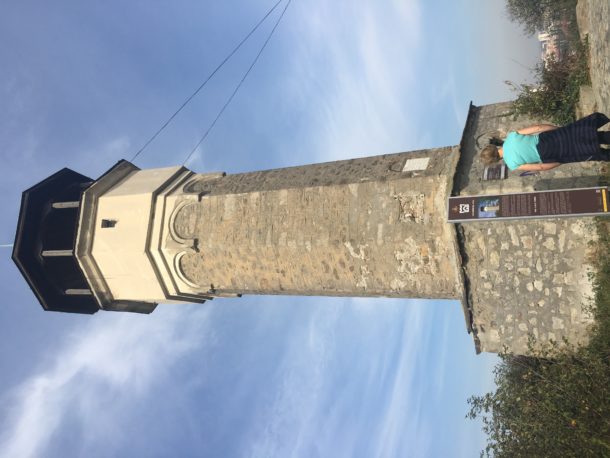 Whilst we’re were in VT, on the walking tour there, we chatted with a lovely American couple, Debbie and Jerry, and as we were walking into the centre of Plovdiv we met them again! We knew that they would be here, but the chances of meeting them again was slim, so it was a stroke of luck.  The sun was out and so we sat in a cafe and chatted with them for about an hour about our travels and theirs, as well as gleaning a load of information on what to do here, as they had been on the walking tour. We had already decided not to do one, but to save it for Sofia.

First recommendation, go to Tsar Simeon’s Park garden at the end of the main street to eat our packed lunch – and very nice it was too!

Apparently Plovdiv (pronounced as it is spelt…just about) is one of Europe’s oldest settlements, having been continuously inhabited for the last 7,000 years, so there is plenty of history to it. Over the years Plovdiv has been built on Plovdiv, and so underneath the present day city there are remains that go back to the Stone Age. More specifically and visible to visitors are the Roman remains. In the centre of town under one of the main shopping streets are the remains of a huge 30,000-seater Roman stadium, where sports events took place…. 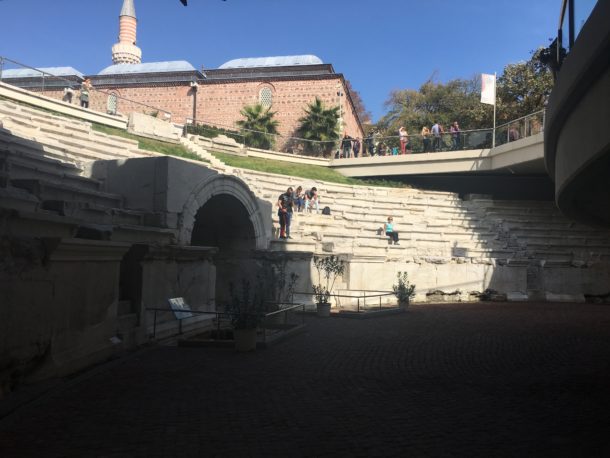 …part of which can even be seen from inside the H&M store! We went in to have a look and rather bizarrely you can see the Roman remains under the stairs – perhaps it’s just a ploy to get punters in the door!  It’s fascinating to look around the remains which are intermingled with the modern city, and apparently there are plans to open up the underground section of the town in years to come. 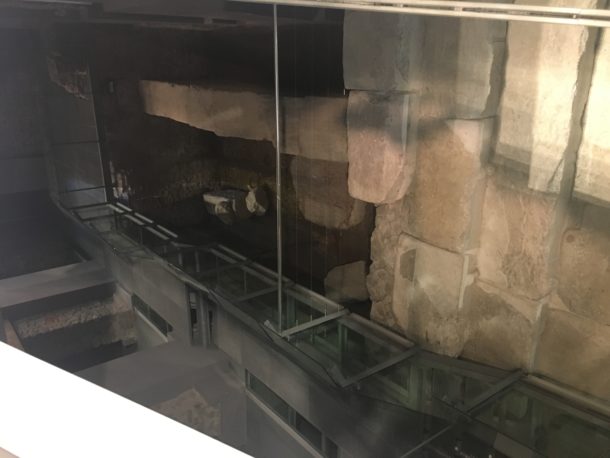 We then walked up to the Old Town and the Roman amphitheater, which we’d seen from Danov Hill –  all very spectacular as it’s up high on another hill, overlooking a major road into town.

The Old Town is quaint with cobbled streets and overhanging merchants’ houses, and the main street leads up another hill to the ruins of an old fortress. This was built as a lookout as it provides great views of the Maritsa River, the plains to the north and the mountains to the south of the city.

The rest of the day was then spent wandering around, having a snooze and then more wandering – basically not doing a whole lot! Since we started back in April we have worked out that we’ve properly had about a day and half where we’ve ‘done nothing’ so we have booked an extra night in Plovdiv to do just that, though knowing us we’ll fill our time…

But actually this Sunday turned into a proper Sunday and we finally did what we keep threatening to do…which was very little! Lazy get up, breakfast, etc and we didn’t leave our digs until 11 am when a bit of cabin fever started to set in. So, we walked up hill number three next to where we are staying, into a park and up to yet another Russian memorial.  Blimey they have a lot of them here! Really great views of the city, perhaps the pick of the three hills,  plus a 17m high statue of a Russian soldier. 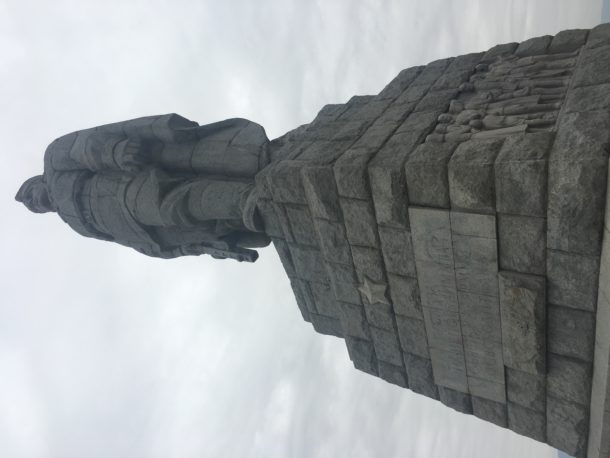 We then headed into the creative district to sit outside one of the many cafes to mull things over and do what we do best – people watching! Although the photo doesn’t show many people to watch, there were quite a few around. 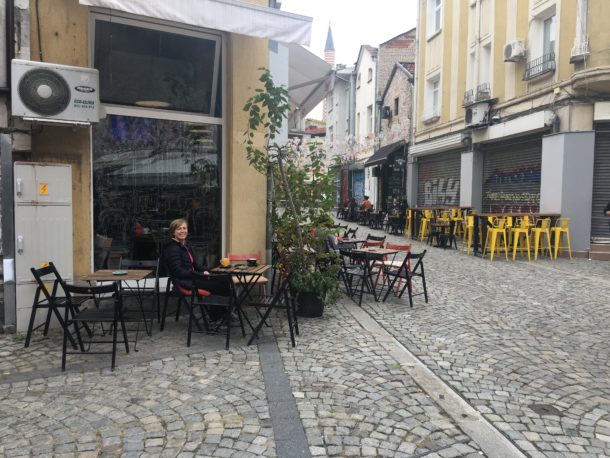 We then took Debbie and Jerry’s second recommendation and went for an evening meal near to the fortress. We assumed that this would be quite touristy, but on a Sunday in mid-October it turns out that there were perhaps a couple of dozen people there and we managed to easily get a table on the terrace overlooking part of the town – all very nice. Recommendation number 3 was to have one of the clay pot meals which we did and found it to be great food and excellent value. Debbie and Jerry mentioned that they were unable to finish theirs and took a doggy bag home… there was no such issue for us! 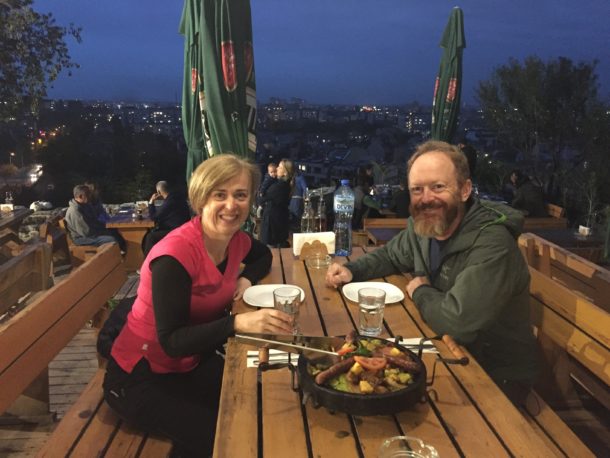 We’d anticipated some difficulties getting out of Plovdiv on a busy Monday morning but it turned out to be pretty easy and we found a quiet backroad that took us most of the way out of town. By that point the roads had quietened down and we had some pleasant, flat cycling. We continued north west back towards the Balkan Mountains which loomed in front of us and stopped for a coffee in a buzzing cafe in Saedinenie. There were a few easy hills as the day wound on and we found a lovely spot for lunch overlooking Lake Payaschnik. 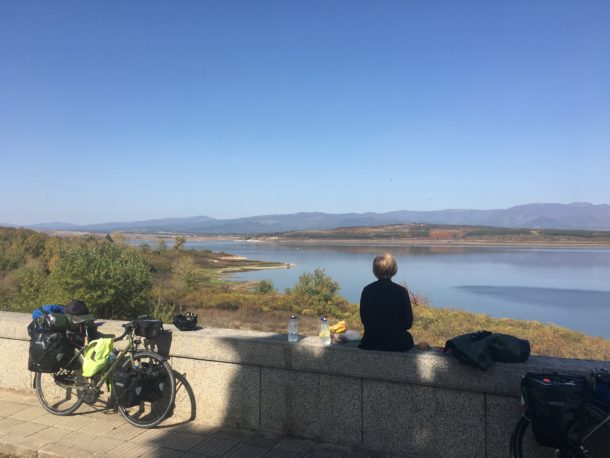 The temperature and cycling has been great all day and we got to our destination of Strelcha by mid-afternoon and checked into a guesthouse. There’s not much in the town, but the accommodation was brilliant.  A common theme that we have found in Eastern Europe as a whole,  is that the standard of our accommodation has been very high and cheap. As an example, we have spent more for a night of camping in Northwest Europe and Scandinavia than we have done on a really nice guesthouse in Bulgaria, complete with kitchen and garden.  Bulgaria and Romania have been particularly good value – yet another reason why we would recommend them as places to visit – before they become more touristy and expensive!

Next stop on our route is Sofia, bu there are a set of tough hills and about 120km in between Strelcha and there, which we decided was too much for one day – well at least to be enjoyable! We did have a look for accommodation enroute, but there was none, so we decided that we’d get back to wild camping. The weather has remained warm and this decision also meant that we could be relaxed about our cycling and how far we needed to go. Before leaving our accommodation we had a rather nice Google Translate and charades conversation with the owner who had been almost blanked us when we arrived – so he’d obviously warmed to us. He even gave Martina a present of Bulgarian rose water from his own crop!

The hills proved to be amazing all day and so we didn’t even bother going in a straight line through them!  First stop of the day was a coffee and stock on food up in Panagyurishte which was all very pleasant. Our lunch stop location proved to be a bit of a mistake as we opted for a piece of scrubland next to the road. Although the road was quiet it wasn’t that inspiring when there’d been so much great scenery to see all day.  When we started off again we soon came to the village of Petrich where there were plenty of better places where we could have had lunch, like the view below – Sod’s law!! 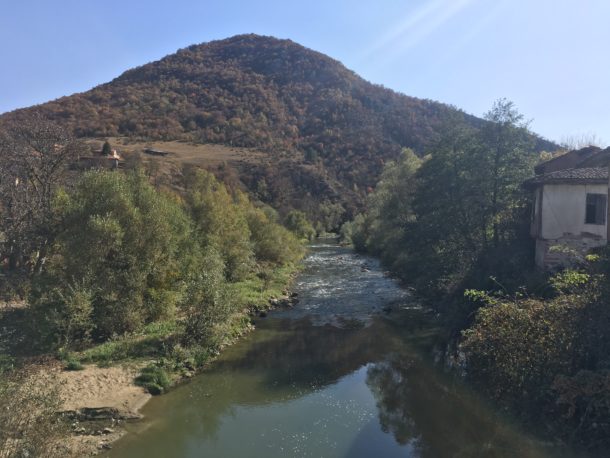 The rest of the day continued with great cycling, lovely views and about 27 degrees temperature,so we were very two happy cyclists! As we were nearing the western edge of the hills it was time to look for a campsite and actually it only took about half an hour to find a secluded farmer’s field to bed down in for the night. The sun goes down at about 7pm now and with it the temperature, so we were snug in our beds soon after, for a spot of reading and an episode of Breaking Bad -then lights out! Spot Martina’s Christmas socks in the photo – they are still alive and kicking …this time combined with sandals!! 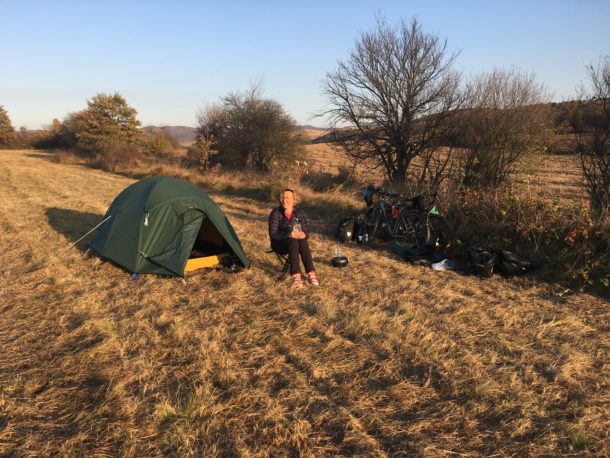