A four-lane motorway into Sofia…. 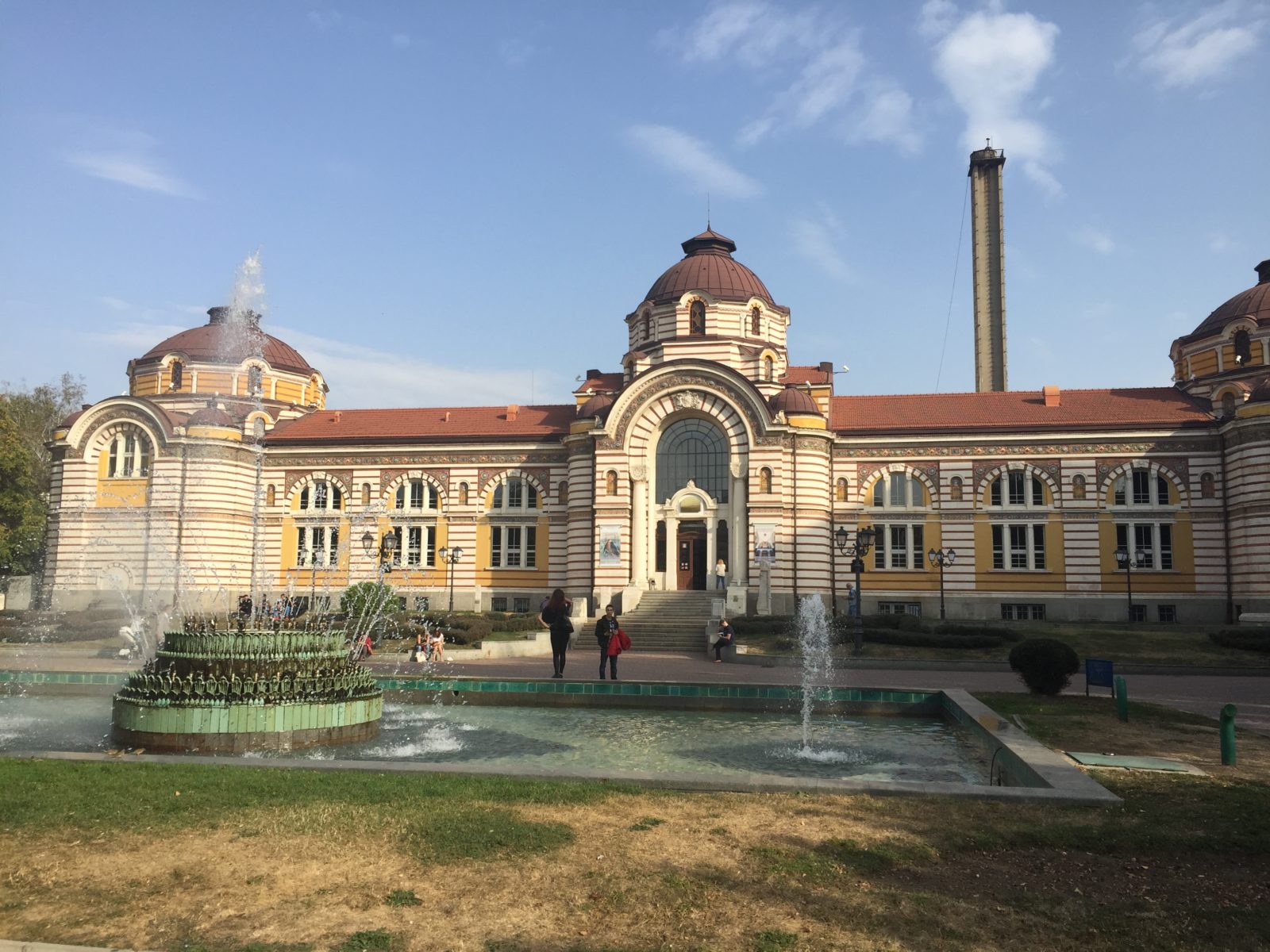 So after a night of wild camping in the hills 40km east of Sofia, we woke up to ice on the tent…a chilly start! We knew it was cold during the night, but not that cold!! And our camping fuel had just run out after cooking dinner last night, so no tea for us – but the sun soon thawed and dried everything out and we were on our way around 10am, slightly later than normal.

Our journey took us out of the hills and we stopped for a hot drink in a place called Elin Pelin 20km into our journey.  I only mention this because we love the name!!

And then the fun started….the road got busier as we got nearer to Sofia.  When we had the city in our sights we knew we had to take a relatively busy road for about 10km, but what we didn’t realise until we got there is that it was a motorway! As we were about to turn onto it a car pulled up to ask if we needed help.  The driver said technically bikes weren’t allowed on this road, but in Bulgaria no one would mind…so deep breath and off we went.  The first part wasn’t that bad as there was a wide hard shoulder that we stuck to, while the cars and trucks whizzed by on the other three lanes.  Mind you there was one idiot driver who was parked in the hard shoulder and hovered outside of his car doing something at the side of the road.  After we manoeuvred around him he drove off and pulled in again further down the road to take stuff out of the boot of his car so we had to manoeuvre around him again.  FFS! Anyway, on we pedalled but the nearer we got the city the more complicated it got.  The motorway just became a normal four-lane road with traffic lights and turnings with cars leaving and joining, so we had to be 100% alert to what was going on around us and behind us.  Have you ever seen cyclists on a road and thought “what the heck are they doing on this road?? They must be foreigners! ”…that was us!! But in fairness the drivers were generally OK.  We even passed two police cars and none of the policemen batted an eyelid.  Then all of a sudden the busy road funnelled right into the city centre and onto a cobbled road – very bizarre! It’s first capital city we have come into without a bicycle lane to be seen, but we made it to our accommodation for 2pm, and after lugging bikes and bags up six flights of stairs we were ready for a snooze.

Early evening we went for a wander round the city centre and after a quiet dinner a restaurant that was an old town house, it was back to base for an early night. We are here for 2 days so exploring Sofia could wait.

Although the outskirts of the city are massive, the centre of Sofia is relatively small with plenty of beautiful buildings – helped of course by the lovely weather. 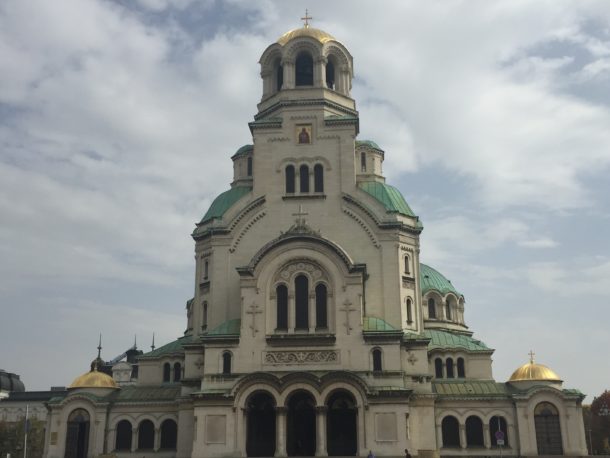 As is our standard now we took a walking tour, which was very good.  Sofia, originally called Serdica, is an old city, similar to Plovdiv in that it’s around 7,000 years old.   There is evidence of its Roman past everywhere with the Roman ruins that were discovered when they were building the metro system in 1998 and excavations that are still ongoing. 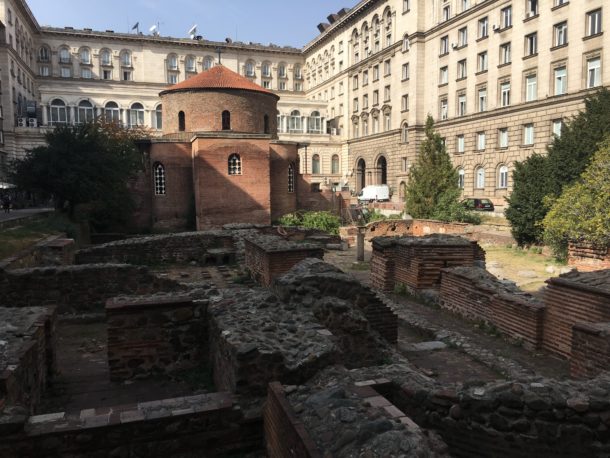 It’s amazing to be able to just walk on a road that the Romans used all those years ago. There is even an amphitheatre, almost the size of the Colosseum in Rome, which unfortunately has a hotel built on it – but you can view the ruins from inside the hotel – really impressive!

There are lots of mineral springs in the area, but unlike Budapest there are no longer any baths in the centre, which is a shame.  But you can fill up drinking water bottles from a large specially-dedicated area in the centre…and the water is hot! 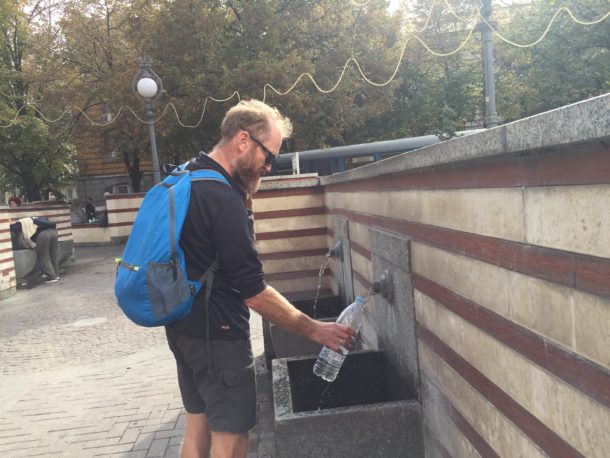 They also have real yellow brick roads….which were built to make Sofia appear less poor and more like a capital city when it became the Capital city after liberation in 1878.

Lots to see and learn about, so after our tour we had our lunch in a park to do some people-watching and then spent the afternoon doing chores and a bit of routine bike maintenance.  One of our chores involved finding a camping shop on the outskirts of town, which was an excuse to see another part of the city and experience the metro system…very cheap, clean and very easy to navigate as there are only 2 lines!

Day 2 here we took things even easier with a visit to the Synagogue, a wander through the centre of the town to the park, coffee and cake from a local market with plenty of people-watching. 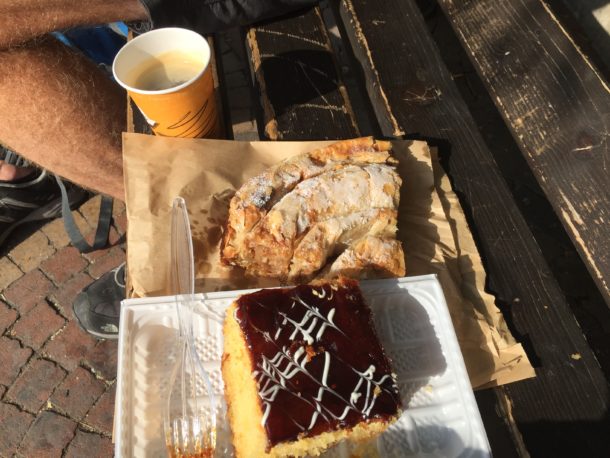 But the day had a couple of challenges for us as well….

The first one was a trip to a petrol station to fill up our fuel bottles for the camping stove, as the camping shop didn’t sell fuel and the guy there told us that it was highly unlikely we would get it anywhere in Bulgaria. We found a petrol station not too far from our accommodation and the attendant in the shop, first of all thought we wanted gas.  When when she figured out it was petrol we were asking for said a big fat NO, because she thought we were possibly buying it for a couple of “yoofs”who were outside the shop.  A bit of gentle persuasion and the reassurance that it was for us and she said yes – but only if we filled it out ourselves, and not the forecourt attendants.  Job done in a matter of minutes for the princely sum of £1.25.  So that’s us back in action again with full camping gear on board. Relief!

Our second challenge was dinner…which normally in a city of this size shouldn’t be a problem.  We had read reviews and decided to venture slightly out of the centre to a restaurant that was highly recommended, but when we got there around 7.15 there were no tables available.  There was very little else in the area to choose from so decided to head back into the centre …but a technical problem on the metro meant that it wasn’t running, so our option was to queue with the throngs of people waiting on buses  and taxis, or eat in the one other decent place we could find.  It was a pretty mediocre pizza place, that served Nigel first – so by the time my dinner had arrived he was nearly finished his. Not our best dinner experience of the trip, or indeed Bulgaria, but I suppose every single night out can’t be amazing.  But it was still a bit of a somber end to what was otherwise another great city break, especially as we still had to take a taxi back into the city centre after dinner, as the metro was still out of service…..but on a positive note it’s reassuring to know that it’s not just the London Underground that suffers “technical faults” that can impact an entire evening out!