The hardest (and coldest!) route to Greece 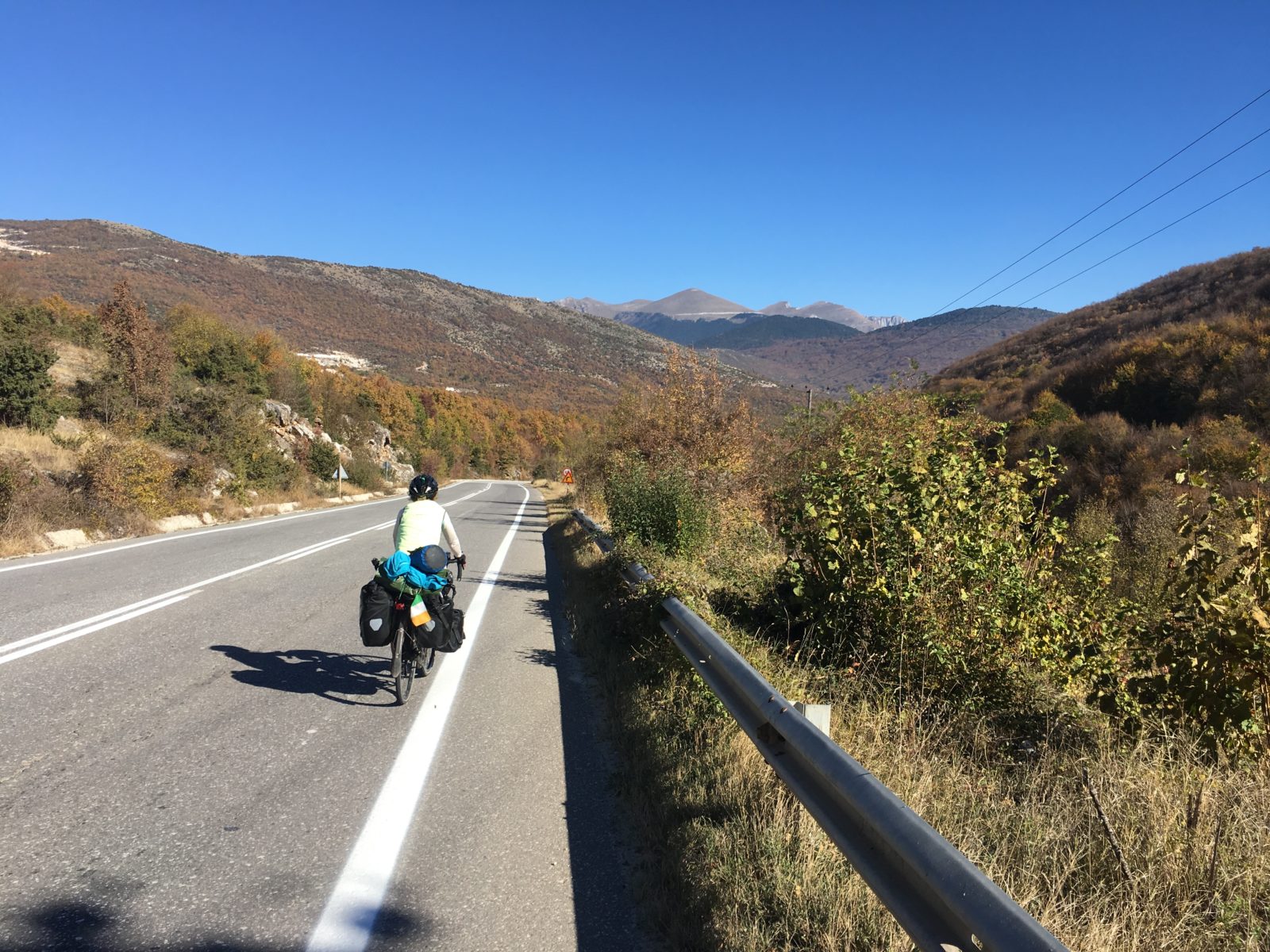 In the few days since we left Kresna we have noticed quite a few border police driving around.  We can only assume it’s to patrol the mountain areas for refugees coming across the border from Greece.

So on with our journey, our intentions had been to visit Rila and Melnik and then take the main road we’d been on into Kresna across the border to Greece. Too late we learnt from locals and Google that this road has now been upgraded to a full on motorway – and we don’t like motorways even if we did get away with being on one into Sofia! So for us to cross the border we had to head north to cross on a lesser road…

Leaving Melnik we knew we had a couple of hilly days ahead, but we were mentally prepared for them – or so we thought.  We had a nice downhill cruise to start….chilly, but not half as long or as cold as the descent from Rila Monastery a few days earlier.  Melnik is a famous wine region so there were lots of vineyards to view en route as we headed for a small town near the border for our last night in Bulgaria.  There were 2 possible routes to get us there – a very hilly route on a fairly remote route OR a very very very hilly route on a more main road – both of which appeared as proper roads on Google maps.   We agreed on the first one as we thought we had done enough hills since leaving Sofia, but a couple of hours in, Nigel had an uncomfortable feeling we had chosen the wrong one as the GPS showed a “path” rather than a “road” further down the line, and he was concerned that it might be a sharp uphill stony path to take us through the hills.  After a short discussion we decided to stick to our plan as the path route didn’t look too long – so on we went.  We turned off from a small village to start our mountain ascent and that took us onto a very steep single track route, which went on for miles! Every corner we turned, the road continued to rise, in a similar vein to the roads in Norway.  I made the unfortunate mistake of stopping to take off my fleece and couldn’t get back on the bike for a while as the road was just too steep, but eventually got a flat piece and back on the bike as we continued to grind upwards at a speed of about 6km an hour, on a very remote road with no other vehicles.  Nigel was getting more nervous about the path further ahead so when we came across a man sitting at the side of a road outside a half-built building, we stopped to ask him what was ahead.  There was a lot of head-shaking and pointing to the bikes and gravel, so we decided to bite the bullet and turn back – it was just too much of a risk to take in such a remote spot. Depressingly it took us all of abut 20 minutes to get back down the road which had taken us 2 hours to climb.  A spot of lunch in the sunshine to warm up and we were off to tackle the very very very hilly route in the knowledge that as it was already 2pm we would be wild camping along the way.

The first hour wasn’t too bad and I was starting to think we got it all wrong in terms of terrain, but then it started…I can’t honestly say we haven’t had a climb like it on this trip so far, and if we have it hasn’t felt as hard as this.  It was absolutely excruciating…hairpin turn after hairpin turn, with very little flat road to allow for any sort of recovery. 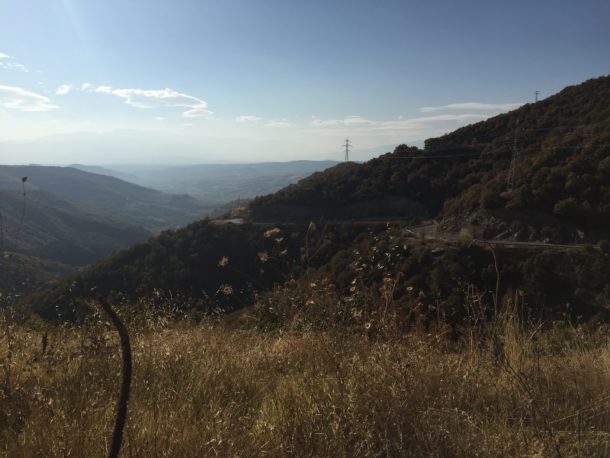 On the positive side, all the autumn colours in the sunny mountains were absolutely stunning and the road was mostly quiet, with just the odd car and truck passing in both directions – some giving us big thumbs and waves of encouragement; others just looking at us in sheer disbelief! There were also herds of cows randomly wandering here and there. 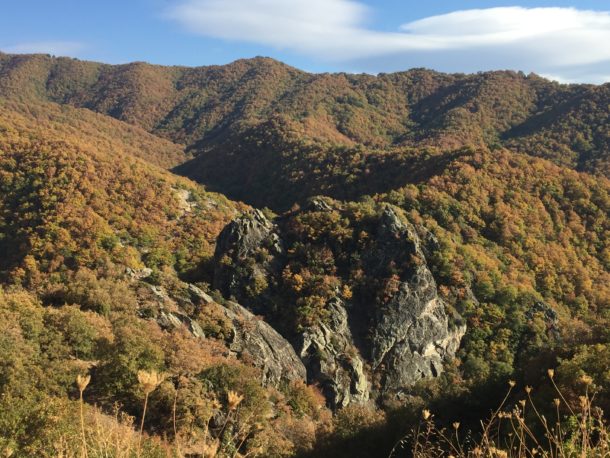 As it gets dark at 7pm knew we had to look for a camping spot around 5pm and unfortunately as we were both low in water supplies we kept going as long as we could in the hope that we would find a fresh water spring along the road.  We had passed loads of them over the last few days but no such luck today and we had forgotten to fill up the “bladder” that we carry for additional water.

We decided on a spot which was literally at the side of the road, but far enough in so as not be in danger from passing traffic, got ourselves into dry clothes to keep warm, set up and fed just as the sun went behind the mountain and it got chilly. As we were getting ready for bed, a Lada 4×4 pulled up beside us and a smiley chap got out and started to speak us in Bulgarian. No idea what he was saying, but his actions indicated that we were on a patch were cows might graze during the night.  It didn’t bother us and he wasn’t making the actions or noises of bears or asking us to leave so it was into the tent for the night dreaming of a large pint of fizzy soda water and lime, as we were both pretty dehydrated from the day but had to conserve the water we had left for the morning!  Not long afterwards it started to pour with rain and wind started to howl round the tent, but we were pretty snug and protected from it. Spot our tent in the photo.. 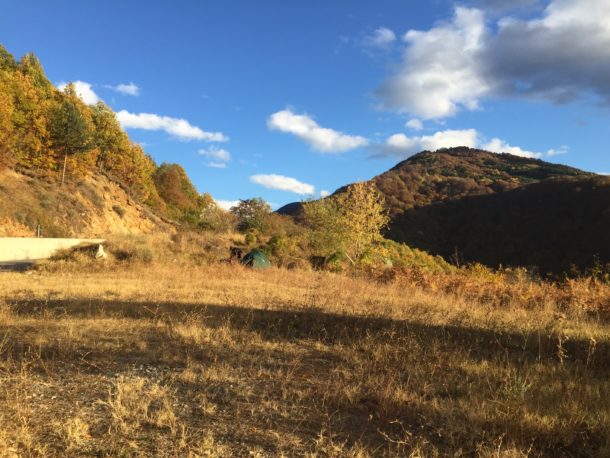 I can’t say we slept particularly well as we were on a bit of a slope, but we didn’t feel too cold in the night – in other words I didn’t have to wear my hat in bed!  But my God when we opened the tent in the morning we realised how well insulated we had been.  The rain had frozen on the the tent cover, the tent zips as well as on all our bags and there was a chilly wind blowing.  Our iPhones had both gone dead, probably with the minus temperature and I forgot to mention that we both have colds, so it definitely wasn’t an idyllic wake up – despite the gorgeous views of the hills all around.  Nothing for it but to wrap up well, get packed and on our way as quickly as we could.  We had checked the GPS the night before and knew that our day would start with about 8km of uphill so at least we knew we would soon warm up – and believe it or not, we did actually have a few jokes and things to make us laugh, so it wasn’t all misery and feeling sorry for ourselves.  Also, the cow man from the night before came and gave us a wave, so it was a nice reassurance that he may have been secretly looking out for us! It was still freezing before we left as the water that we had kept in the tent that hadn’t been frozen when we woke, was starting to freeze, as was the toothpaste and our our cycling shoes.  That was truly the worst part for me…putting my feet into shoes that were frozen solid, in the knowledge that as they thawed out my feet would get colder!

But then we were off and into a climb so while our feet didn’t exactly warm up, they thawed a little and we generally warmed up.  About 1km up the mountain there was that water spring that we so desperately wanted the night before,  so we replenished our water bottles and it was the last push to the top for about another hour.  Nigel had gauged where the the descent would start, so when we got there we stopped to put every piece of warm clothing on to be prepared.  Where the sun shone it was pleasant, but the shady bits on our ascent were cold, so we knew going downhill would be bloody freezing – and we had 13km of it to do.  There was a chilly north wind blowing in our faces so I had to cycle with my scarf covering my face…Nigel is obviously made of hardier stuff than me as he went bare-faced, but all that downhill was a good opportunity to plug my phone in and charge it. We made it to the bottom and to the town of Gotse Delche with a well-charged phone and had the best coffees and green teas sitting in the sun EVER.  This is the photo at the bottom that show the massive hills that we had just conquered and that had been our home for a night. 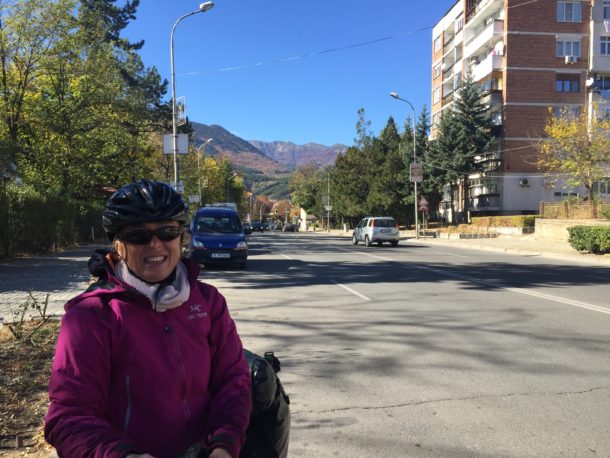 Chatting later in the warmth of the sun, we both said how lucky we are that even when we have chilly night like that, we know that there is an end in sight.  Not so for the many refugees you see pictures of in the hills, who must wake up to these conditions every day in the winter with no change on the horizon.

Warmed up, it was off to Lidl for a shopping stock up and off to the accommodation in Hadzhidimovo that we had booked for the previous night, cancelled and now rebooked.  Turned up to a whole house, with everything we needed, a warm wood-burning stove and a lovely mountain view. 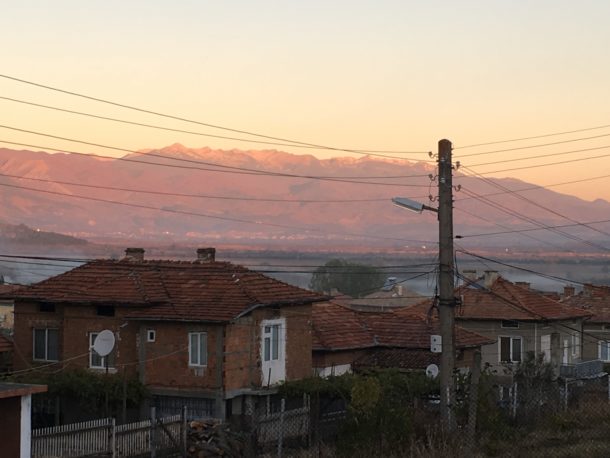 Oh the difference 24 hours can make! Even though at the time we didn’t like the thought of turning back we still think it was the right decision. The area was very remote and as it was it poured with rain during the night and who knows what the path may have turned into – we may still be there if we’d continued!

Our last morning in Bulgaria was a bit like a sketch from a comedy show. Opposite our house was a small local shop so I went in there with the task of spending our last £10 in Bulgarian Lev on chocolate and food that we could carry…given that we had done a stock up yesterday.  All the chocolate was behind the counter so it was “point and press”to the little old lady working there as I cleared the shop of Snickers, Lion Bars, Chunky KitKats and chocolate peanuts.  I was like a chocolate addict on a binge but I did throw in a couple of apples for a bit of balance.  And STILL I had only spent about £5.  Back to the house and Nigel discovered he had more packing space so I went back for more – and even bought Nigel coffees that I discovered she served…but at 20p a go, there is only so much coffee Nigel can take.  So I had to admit defeat and head to the border with about £3 of unspent change….and enough chocolate to put Willie Wonka and his factory out of business!

The Greek border was about 15km away and although it did involve some hill climb up, it was pretty straightforward getting there and no dramas crossing the border.  But interestingly, for the first time on our trip there was no sign on the Greek side to welcome us to their country.  How very rude of them!