Vang Vieng to Luang Prabang, Laos – notes for other cyclists 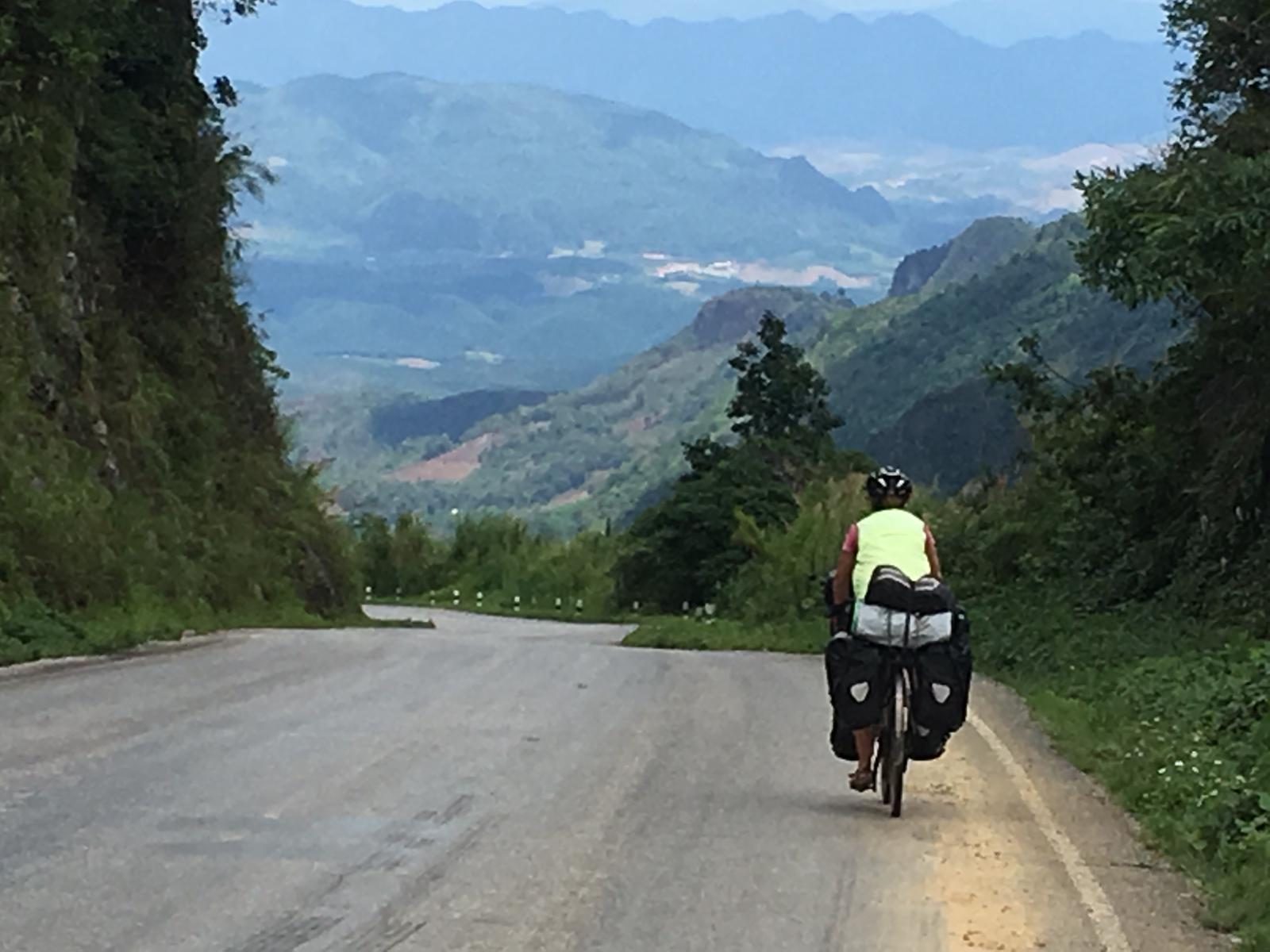 Notes for cyclists planning to travel from Vang Vieng to Luang Prabang, Laos

The terrain between Vang Vieng and Luang Prabang in Laos is a much discussed route by long-distance cyclists who want to travel either north to Vietnam, or south to Thailand. The main reason for this interest is because of the mountains between Kasi and Xiang Ngeun.

We cycled south to north during mid-June 2019.

We are in are late 40s and when we did this journey had been on the road for nearly 15 months so I would say we were reasonably bike-fit. But as it was June it was very hot (35 degrees plus at times) and very humid (80%+),  so our cycling days could start as early as 5:30am in order to beat the afternoon heat.

The most popular route between these two towns is to take the main Route 13 the whole way. For most cyclists this generally means that the journey from Kasi (60km north of Vang Vieng) to Luang Prabang takes over 3- days with 2-night stops, because this is where most of the mountains are. After talking to another cyclist (thank you Hannah!) we decided to take a slightly different route which may be of interest to other cyclists…

Our entire route was on good asphalt with only a couple of places where gravel has been washed off the hills on to the road, but nothing that caused us problems. The roads are also reasonably quiet though there are quite a few Chinese trucks in the area working, we think, on an international railway line.

The first day to Kasi was simple undulating terrain with some nice views and only 600m+ climb over 60km. The cyclists who take the 13 route onwards from here, will often stay in one of the many guesthouses in and around Kasi.

For us, when we arrived in Kasi it was only 10:30am so we decided to push on, using an alternative route. This is on an un-numbered road that heads north-west from Kasi, as shown on the map below…

The campsite is actually a cafe and I don’t think that they have many campers. There is a patch of flat ground, a toilet building and somewhere to wash (bucket wash not a shower), the cafe itself and a grass-covered pavilion. When we asked about camping the girl that was running the cafe phoned someone, probably the owner, who had very good English who said it was fine and would cost 40,000kip (approx £3.50/$4.50 at the time of writing) for two of us. The cafe serves noodle soup and coffee plus some other stuff we didn’t try! We were allowed to camp under the grass-covered pavilion and as it was hot we only used a mosquito net…

We found this part of the journey very tough! Straight out of Kasi Camping the hills start. Reasonably tough to start with and then they progressively get harder.

In the first 14km there is a 1330m vertical climb!  For the most part the gradient is at least 11% but at one point gets to 20%, with plenty in between. About 3/4 of the way up there is fresh mountain water pouring out of a bamboo pipe on the right hand side of the road. It’s good to drink and to fill up bottles.

At the top of this stretch there is a viewing point where there are a few shacks selling snacks, bananas, etc. I’m sure that the view is stunning, but unfortunately it was cloudy when we were there – though this was actually a blessing as it would have been VERY hot rather than just hot!

The next portion almost feels like it should be a descent after all that climbing, but that’s not the reality as unfortunately there is plenty more climbing to go.  Once over the summit there is a sort of plateau area which is undulating with numerous smaller, but still tough (up to 14%) climbs, which last for the next 14km-or-so.

Towards the end of this stretch there are a few places selling snacks at the side of the road, but generally food is limited on this route. At about 40km from Kasi Camping there is a village (sorry we can’t remember the name and it doesn’t show on Google Maps) where there is a guesthouse.

At 47km there is a right turn onto Route 4 towards Xiang Ngeun. Even though there have been some steep descents by this stage, it is not the end of the climbs….and for the next 20km there’s still more testing hills to go up. The final 15km is an easy freewheel to Xiang Ngeun.

On this stretch of the journey we covered 83km and had climbed a total of nearly 2,200m.

At this point we decided to stop. Google Maps shows a number of guesthouses in Xiang Ngeun, but before we got to any of those we found this place…

There is also a restaurant on site that serves good Laos food with decent cyclists-size portions and beer! We’d recommend it as it was clean, had decent facilities and at a reasonable price – plus they didn’t try to rip us off.

Further down the road at the left turn at the T junction onto the Route 13 heading north towards Lurang Prabang, we saw at least 2 other guesthouses, but can’t comment on their cost or quality.  There’s also a load of places to eat near these.

So, having done an enormous cycle the day befor,  we were now in the happy position that we only had 26km to go to Luang Prabang and only 220m to climb. And an hour and a half after leaving we were in the centre of Luang Prabang. This a tourist city and there’s lots of accommodation and eating options.

Though we thought that this was a tough route it was manageable and there was, in essence, one really big day on the mountain. There’s little in the way of food on the mountain and only a few options for water, so some advance planning is needed for both of these. The camping option worked for us. In terms of metres climbed, we think it’s an easier route than the route 13 option, but there is far less accommodation this way.