Bulgaria… a land we know very little about! 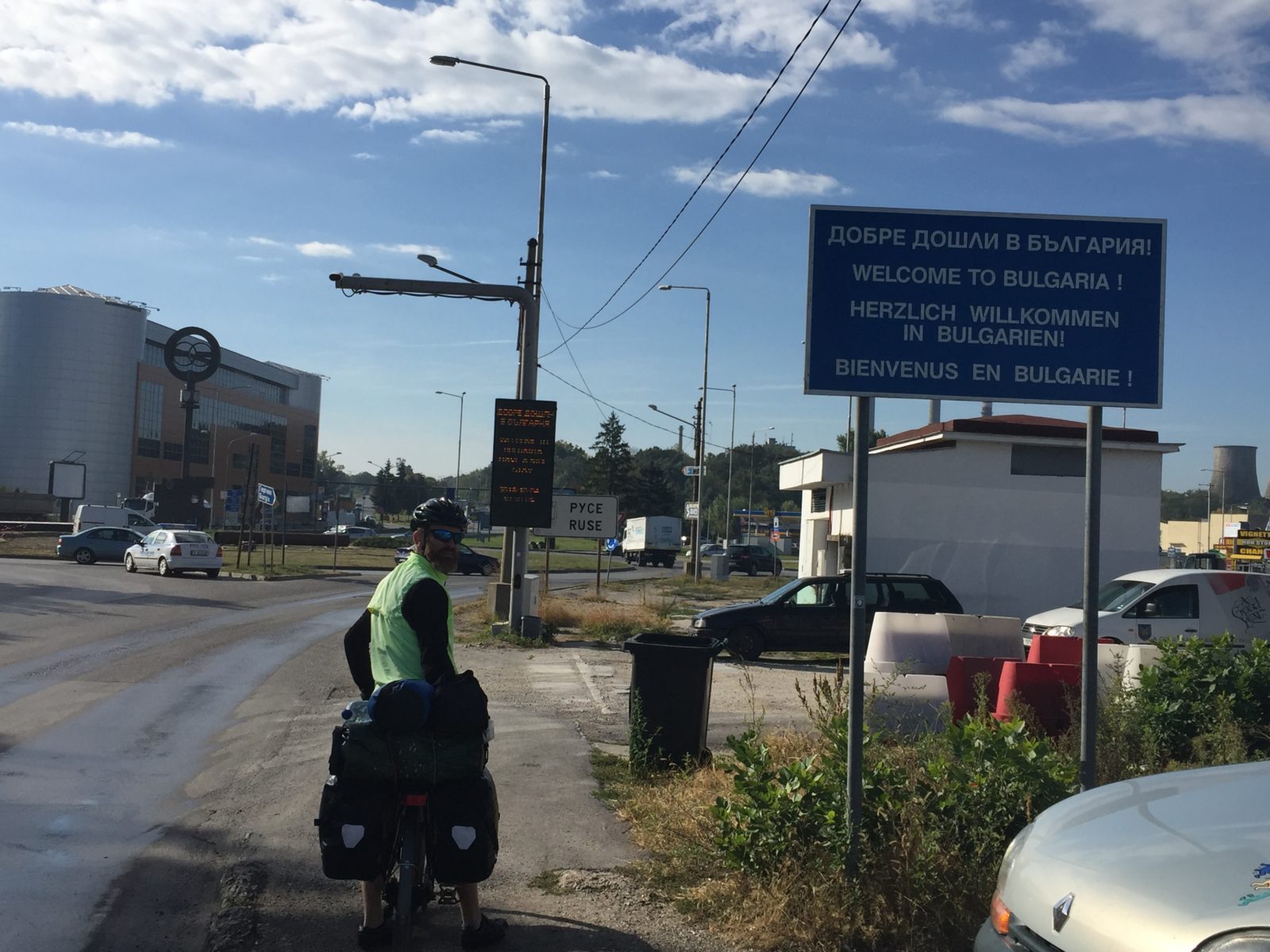 As our overnight in Giurgiu was practically on the Romanian-Bulgarian border, crossing into Bulgaria was pretty easy.  We took the only bridge route over the Danube and had expected the 2.3km single-lane bridge to be heaving with trucks – but miraculously it was completely empty. Most of the trucks seemed to be in their queue for customs, so we just whizzed passed and straight into Bulgaria – with lots of the drivers cheering us on and waving. 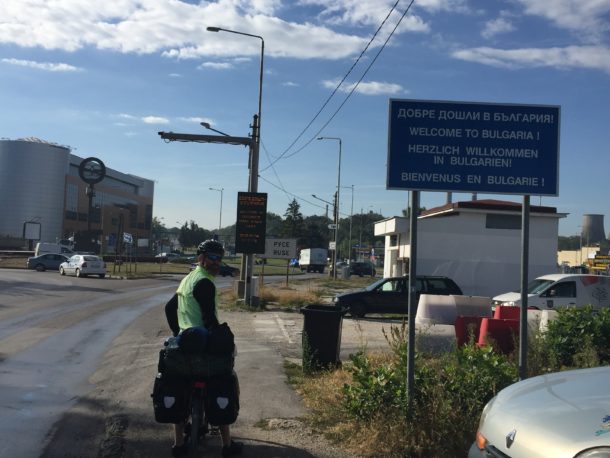 Then the GPS froze, so we had to wing our way into Ruse town centre, where we sat in the sunshine for our first coffee and cake in country 15! 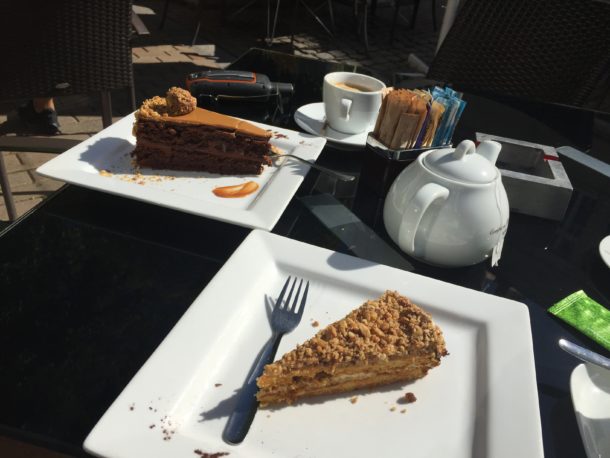 We have touched the mighty Danube River on a few occasions over the past 3 months or so, but this time we have said goodbye to it for the last time on this trip.

Bulgaria is somewhere we know very little about and it definitely feels very different anywhere else we have been so for.  For a start, the signage is predominately in Cyrillic – even more so than in Serbia. And the people also look different, with many looking more Mediterranean than European. (Apparently 3% of the population here are Turkish).  The next few weeks might prove challenging in the language department as when we tried to use Google to translate from Bulgarian to English, it couldn’t do it because we don’t have the Cyrillic keyboard!

Ruse has a pretty city centre so after our cake stop and a trip to a cash machine we were on our way to discover the delights of Bulgaria, whatever they would be.  Getting out of the town wasn’t completely straightforward but a very helpful driver stopped to give us directions in Bulgarian, which believe it or not, we did sort of understand.

Perfect cycling weather with sunshine and the wind behind us, but it certainly wasn’t flat – and it did seem to go uphill for a very long time.  The route we chose was relatively quiet and there wasn’t much going on in the villages we passed through, apart from dogs who seemed to know we had food! Saying that, we had lots of drivers waving at us and school children shouting hello, which was nice, plus there was a lovely backdrop of picturesque mountains. Byala was our end destination, which unfortunately doesn’t have much accommodation.  Our first option at the top of a big steep hill was fully booked, so we were left with the motel by the side of the busy road.  It wasn’t that bad to be honest except for the fact that the room, bathroom and towels all stank of tobacco smoke…but we were pretty pooped, so after planning ahead for the next few days and a sandwich dinner in our room, it was lights out.  But it was not going to be a quiet night ….there was with a full-blown marital a few rooms away and next door was occupied until the early hours with a couple engaging in very loud “nocturnal activities”.   Poor Nigel literally didnt sleep at all until they left their room around 4am. I, on the other hand, can sleep through most things and slept most of the night.

By the way, for anyone from Buncrana reading this, the town of Byala doesn’t have a lot going for it, but it does have its own version of the Crana Bridge which I couldn’t resist taking a photo of! 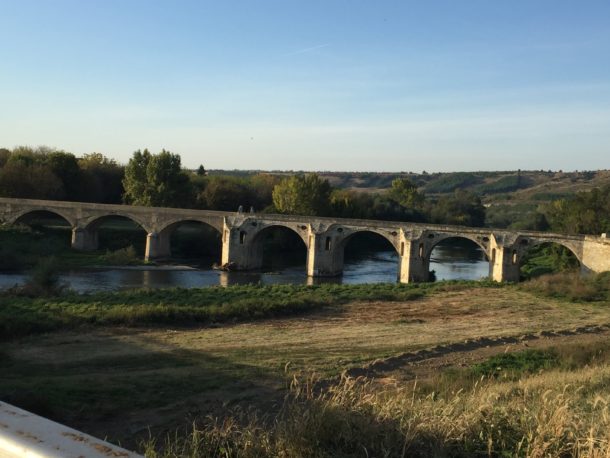 Our plan for Friday plan was a 90km ride to Krushuna, which meant starting the day on the busy E85 road, including a dual carriageway at the start – something we weren’t looking forward to. Bleary-eyed Nigel summed it up when he said “Come on, let’s get this over and done with” – and we did.  18km of endless trucks on our tails and drivers on the dual-carriageway beeping and wagging their fingers, which would indicate that we shouldn’t have been on the road!  The scenery was pretty spectacualr but I was praying as fast as I was pedalling so no time for looking around me! But we did it in an hour, which was good going as there were a few hills on the way, and then it was onto nice quiet roads.  We decided to celebrate with an early morning coffee break in a little town called Polski Trambesh.  We had just sat down when an English couple (Steven and Sharon) sat down beside us and started to chat…they have recently moved there from Rotherham, don’t speak the language and have had a summer where the temperature hit 50 degrees and they are coming into a winter where temperatures can drop to -27.  Very brave I would say as they weren’t young! After a nice chat we were off on our way.  The scenery wasn’t as spectacular as during the early morning run and it took us through lots of really poor and run down villages.  This is definitely the poorest-looking region we have come across on our travel so far, with most of the villages and towns being made up of derelict buildings and looking really tatty, but definitely occupied. Note that there is a horse wandering untethered on the left side of the square. 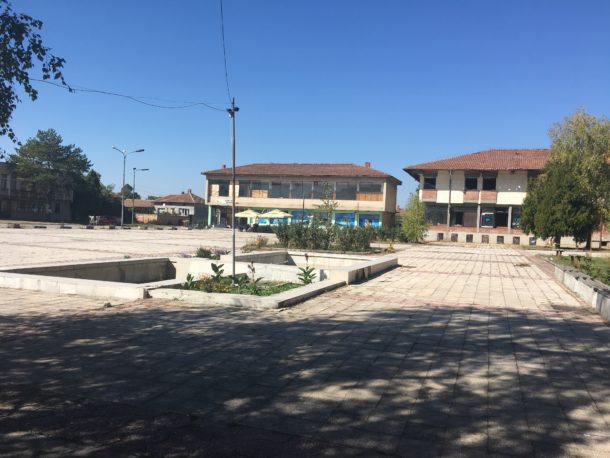 And it was heart-breaking to see an old lady in her late 70s/early 80s collecting firewood at the side of a road..especially in the EU in 2018…the funding obviously hasn’t filtered down to the poeple living in these villages.   But they are all friendly and wave and shout out to us as we pass and are generally very nice.

We got to our destination around 4pm and had to ask a couple of workmen where our accommodation was as the name and address was in the Latin alphabet, which wasn’t what was on the street signs.  And here’s what we mean by them being very friendly – he downed tools, took us to our house and rang the doorbell to check there was someone in…and he hadn’t a word of English – just nodded and waved when he left.

Our reason for coming to Krushuna was because of a waterfall that we wanted to see.  We had planned to wait until the morning to go see it, but as the temperature was still around 25 degrees we decided to make the most of the day and headed off on a short hike…after our 90km on bikes! A stunning natural park just minutes from our accommodation with fantastic waterfalls and a turquoise water pool. 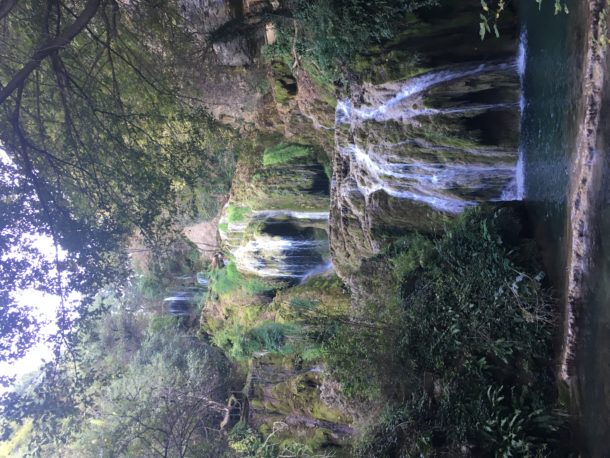 A fantastic end to a tiring day – and after a pasta dinner it was an early night for us.

A lazy get-up on Saturday as we only had about 35km to cover but we were still on the road by 9.30. About 12km down the road we turned off to visit the Devetashka cave, a large limestone cave that is home to 30,000 bats, and one of the recommended attractions on the area.  We left our bikes with the surly but helpful security guard and went to explore. The caves are very easy to access, which was lucky for us as we were still in our cycling shoes. And they are absolutely spectacular – despite the fact that they smell of bats and pigeons! And the weather was amazing so it made the whole place look really magical.  And the fact that we practically had the place to ourselves was even better! 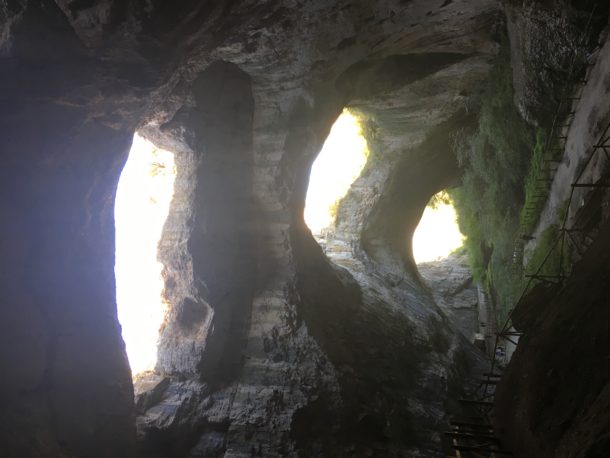 Back on the bikes towards Lovech, one of the oldest towns in Bulgaria, which was our destination for the night. We were too early to check into our hotel so we sat in the old square for lunch – a great spot for people-watching.  Once checked in and the usual heaving of baggage upstairs and locking of bikes, we showered and were out and about to discover the town…and what a gem it is.  We crossed the covered bridge with lots of little souvenir shops inside selling complete tat before walking to the top of a steep hill so see a huge statue of Vasil Levski, a Bulgarian national hero who strategised a movement to liberate Bulgaria from the Turks in the 1800s. 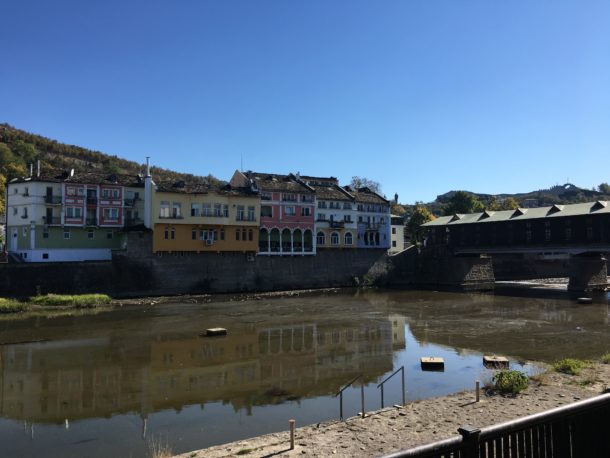 More impressive was the old fortress with fantastic views over the town on one side and the river Osam.

There was also the start of a walking trail that took us along a limestone escarpment with a river valley below.   Not realising it was quite as long as it was we set off on the trail in the baking heat – but the views were well worth it! 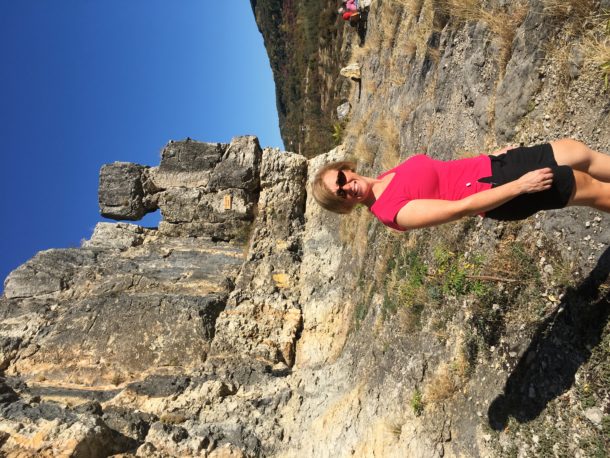 By the time we made it back into the centre, it was beer o clock! As it had started to get chilly we decided to look for restaurant options for inside dining to discover that we only had one option as the second option had a wedding in full flow.  We had a fantastic dinner of traditional Bulgarian sausages, grilled kebab and salad – and a chocolate soufflé – just in time to get out of there before two local musicians set up to entertain for the night – lucky escape me thinks!

One thing to point out is that the weather has definitely changed since we left Belgrade and autum has set in.  Even though the temperature gets to mid-twenties in the afternoon, the mornings and evenings are chilly and the sun is at eye level for cycling which impacts our vision. And it is dark by 7:30, so the days are definitely shorter.  Hopefully though this won’t change too much between here and Istanbul as we are still heading south.