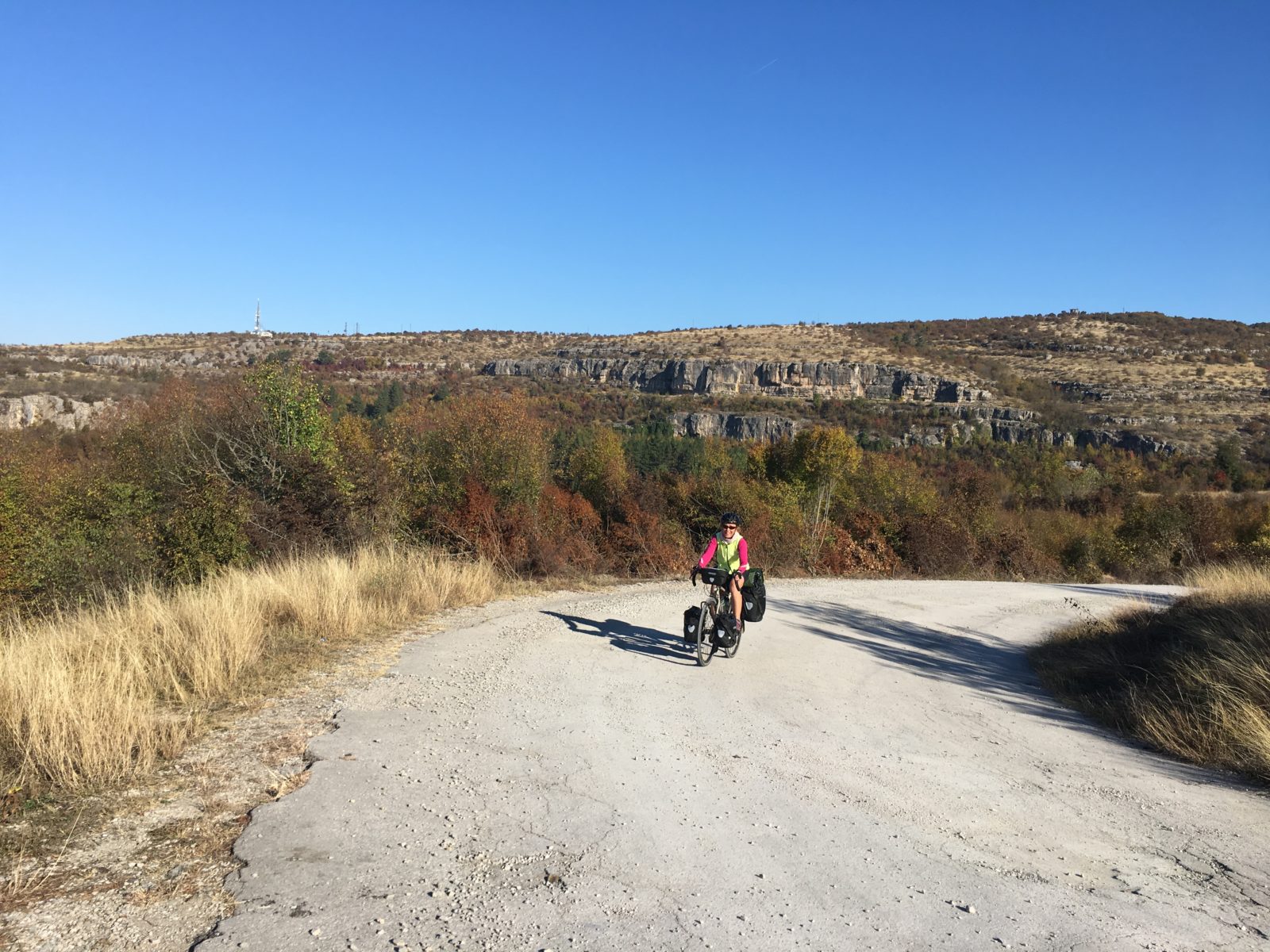 One thing that we neglected to mention in the last update is that the lovely ‘Old Town’ of Lovech is quite small in comparison to the rest of the town. Across the river is the not-so-nice  ‘New Town’, which to be honest isn’t that new in parts; there is also a large sprawling industrial complex to the north of the town that we had to pass through on our way in.  Though industrial sites are a necessity it’s sometimes a shame that they spring up near to or on top of very beautiful parts of the world, in this case mountains to the south and east and plains to the north and west.

The mountains to the east was our direction of choice for Sunday, so after stocking up on food we headed out of Lovech along the side of the Osam River, heading towards a small village in the hills called Emen.  We pedalled along the bottom of the valley that we had been looking into from the walk we did yesterday and as expected, the views were amazing. All the while the road slowly climbed out of the valley, all 11km of it!  We were obviously on the less trodden route as it all went a bit ‘rural’ the further we got away from the town. Overgrown hedges, massive potholes and gravel… plus grass in the middle of the road. This morning was the first time that we have really noticed the seasons changing – apart from the chillier mornings the leaves are just starting to turn, which made the views all the more spectacular. 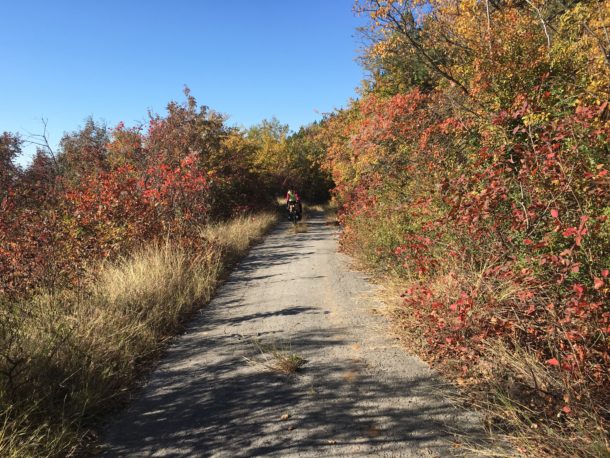 The rest of the day continued in much the same way – the roads went from being okay, to being full of monster potholes and back again, on a regular basis, but the limestone scenery stayed just as amazing throughout. There were, however, a fair few tough hills for us to grind up too!

At lunchtime we came across Lake Stamboliyski where there were a load of fishermen trying their luck. It seemed like a perfect spot for us to eat, so we did – and we basked in the sun with the temperature about 25 degrees, which has now become our favourite temperature! A short while after lunch we were passing through a village when a group of young boys spied us, leapt on their own bikes and gave chase – in a 10-year old boy way..so for about a kilometre we were suddenly a group of nine! We tried to communicate, but it was a bit sketchy and when they got to the limit of their territory they turned around, waved goodbye and we were on our own again.

Our original plan for Bulgaria had been to cycle down the Black Sea coast, but we were warned off this by another long-distance cyclist (Thank you Will!) as it’s unclear whether cyclists are actually allowed on the coastal road, and apparently the drivers are very aggressive. So, taking this onboard we changed our plans to an inland route, which we are now very glad that we did. The limestone in this region has been carved by rivers, wind and rain over the millennia and so the scenery is fantastic – and it’s currently covered in the changing trees. In general we’ve managed to find small, quiet roads so far (all barring the hour on the E85), and even with the hills and potholes it has been really nice cycling. 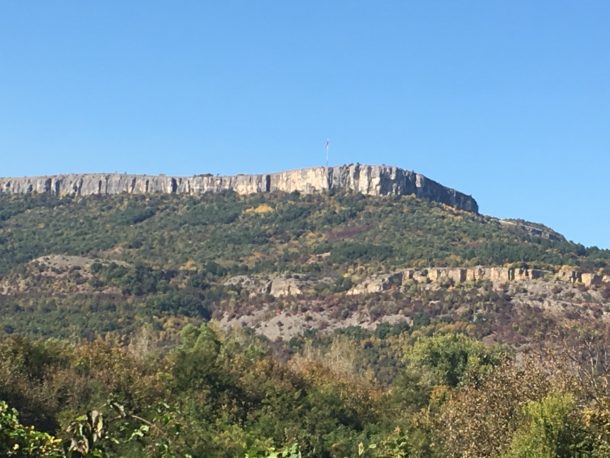 As we enter a new country we do a bit of research to find out more about its history,  what we might want to do and where we might want to visit. In general an internet search of this kind will throw up a load of what-to-do lists from different travel sites. These are useful because they help us decide, which then in turn dictates a route, plus we also take suggestions from locals and friends along the way etc. However, on this occasion I had basically picked Emen purely as an overnight destination between Lovech (our starting point) and Veliko Tărnovo (our final destination) as the hills in between made it too far for us for one day of cycling.

When we reached Emen, it turns out that, more by luck than judgement, it was a bit of a find really! Firstly, there was more than one place to stay and that the one that we chose was really good with all the things we look for – clean room, shower and a kitchen at a great price. It was actually a fairly large complex with a few ‘chalets’ and rooms, swimming pool, bar, etc, and we were the only ones there as we are now out of season! Once checked in we had a lovely evening sitting in the sun (nicely still in the mid-20s at this point) over dinner and then early to bed.  It may have even been pre-9pm as it had been really hilly… well that’s our excuse, plus we were  up early next morning…

Emen had shown up a ‘place of interest’ on Google maps, which we discovered was Emen Canyon, just a kilometre down the road. A quick breakfast and we were off for a hike and soon into the canyon itself. Firstly, there was a large cave which was accessed by steps. The inside went far further than we expected and there were concrete plinths on the ground and small buildings inside which we think were possibly something to do with WW2.  There was also as an old lift shaft that connected to buildings, which we saw above the cave later on our walk.  With only iPhones to light the way it got a bit spooky the further inside we went, especially when a bat flew out and nearly hit me in the face in a horror film kind of way! Time, at this point, to turn around and bravely head back to the light!

The path took us high along the top of the canyon with great views of the limestone walls on the other side, even if the early morning sun was in our eyes. 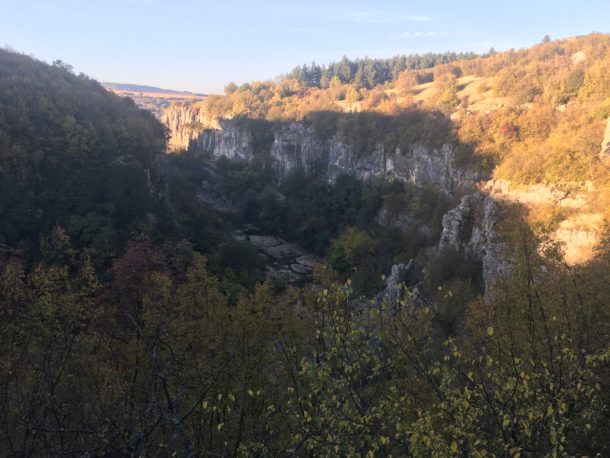 A steep descent took us down to river level to a very small waterfall – there’s not been much rain here recently, but it was beautiful nonetheless and a great place to sit and take it all in. 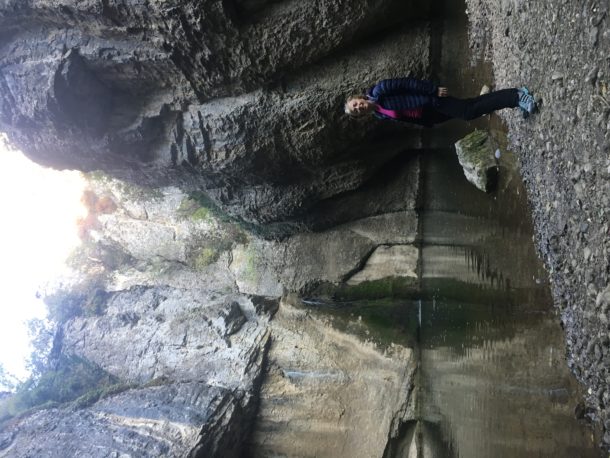 Downstream we came across the lake, where the river flows into – again another beautiful place… 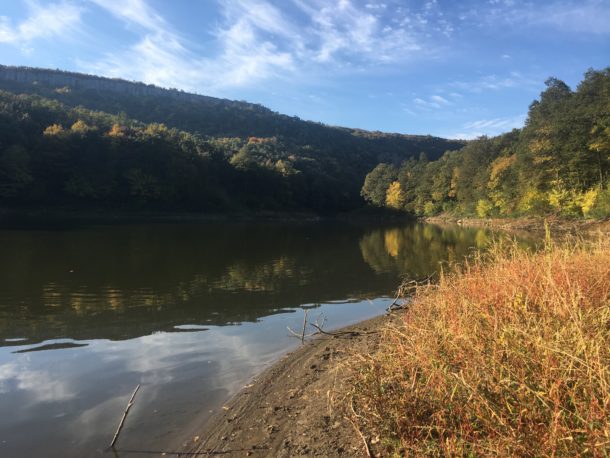 Back to the accommodation, we loaded the bikes and headed off towards Veliko Tărnovo a short 30km hop of tough hills. Apart from a 15-minute stint, we managed to stay on quiet roads, away from a busy trunk road, and arrived into VT, as it’s now known, through yet another sprawling industrial zone on the outskirts.  Blimey, this place has some hills! Even the last bit into town to our accommodation was up a really steep hill.  However, I think we have regained our ‘hill legs’ as it didn’t seem too bad. And having our hill legs back is a good thing as we have the Balkan Mountains and the Shipka Pass to conquer in the coming days!

Yet another great place to stay with all our prerequisites met, so after checking in and a quick snooze we venture out into VT, basically wandering around the old town, across the river and then back in a big circle.  Had a great dinner in a lovely place with a terrace overlooking the town where we had a huge meal of Bulgarian meaty food…I need say no more! See the terrace view below… 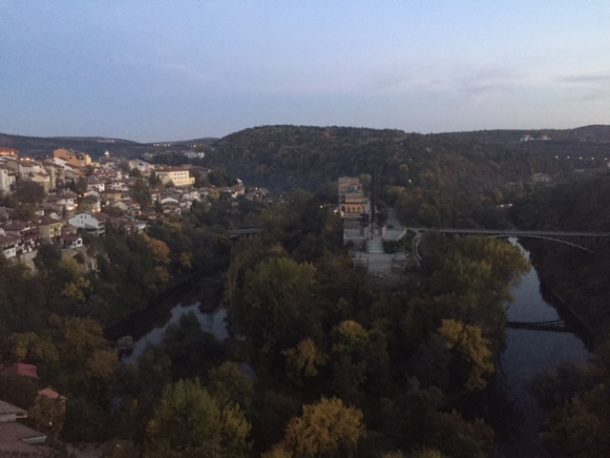 We had a reasonably lazy get up on Tuesday and then joined a walking tour of the town. Usually we wouldn’t bother with a walking tour of a smaller place like VT, but as this used to be the capital of Bulgaria a few hundred years ago, it seemed like a good idea to learn more about it, and it was. The tour, as usual, took us through the new and old parts of the town and gave us a good idea of the layout and very good guide imparted a load of knowledge. A couple of great nuggets of information from our guide: the Cyrillic alphabet actually comes from Bulgaria not Russia as most people (us included) think, and the Bulgarians nod their head for no and shake it for yes…unless they are speaking to someone from the “rest of the world” who do it the ‘normal’ way around – not confusing at all then! 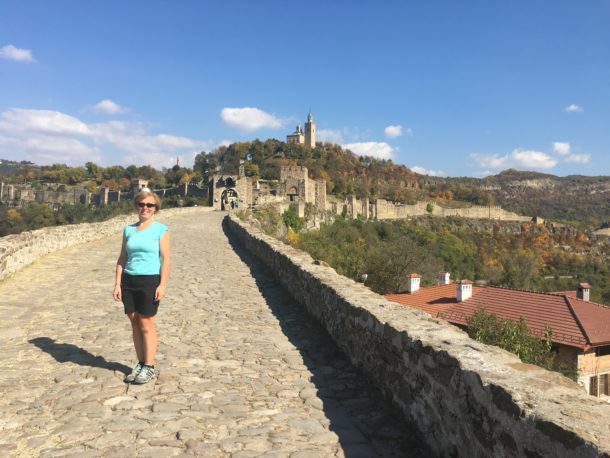 We had lunch overlooking the medieval fortress, which was the seat of the old monarchy and the Patriarc of the Orthodox Church, and then went to wander around it. Great views of the whole town …

The inside of the church at the top of the fortress is painted in rather bizarre frescoes. Religion and communism don’t really mix and although the communist regime banned religion, this church survived. The inside of the church was painted during the 80s in a modernist way depicting medieval scenes – all VERY strange and unless you see them it’s very difficult to explain, but the picture below gives an example… 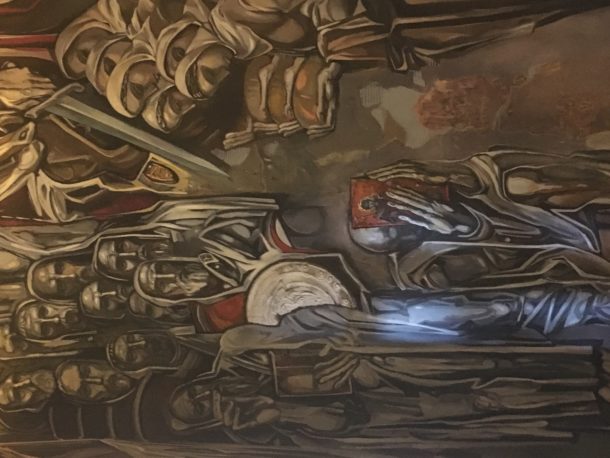 Emil, our host in our accommodation has been a great help with regards our onward journey, especially in recommending the quiet roads to take, and we now believe we have a good route through Bulgaria taking in Plovdiv and Sofia before heading to Greece. Fingers crossed!