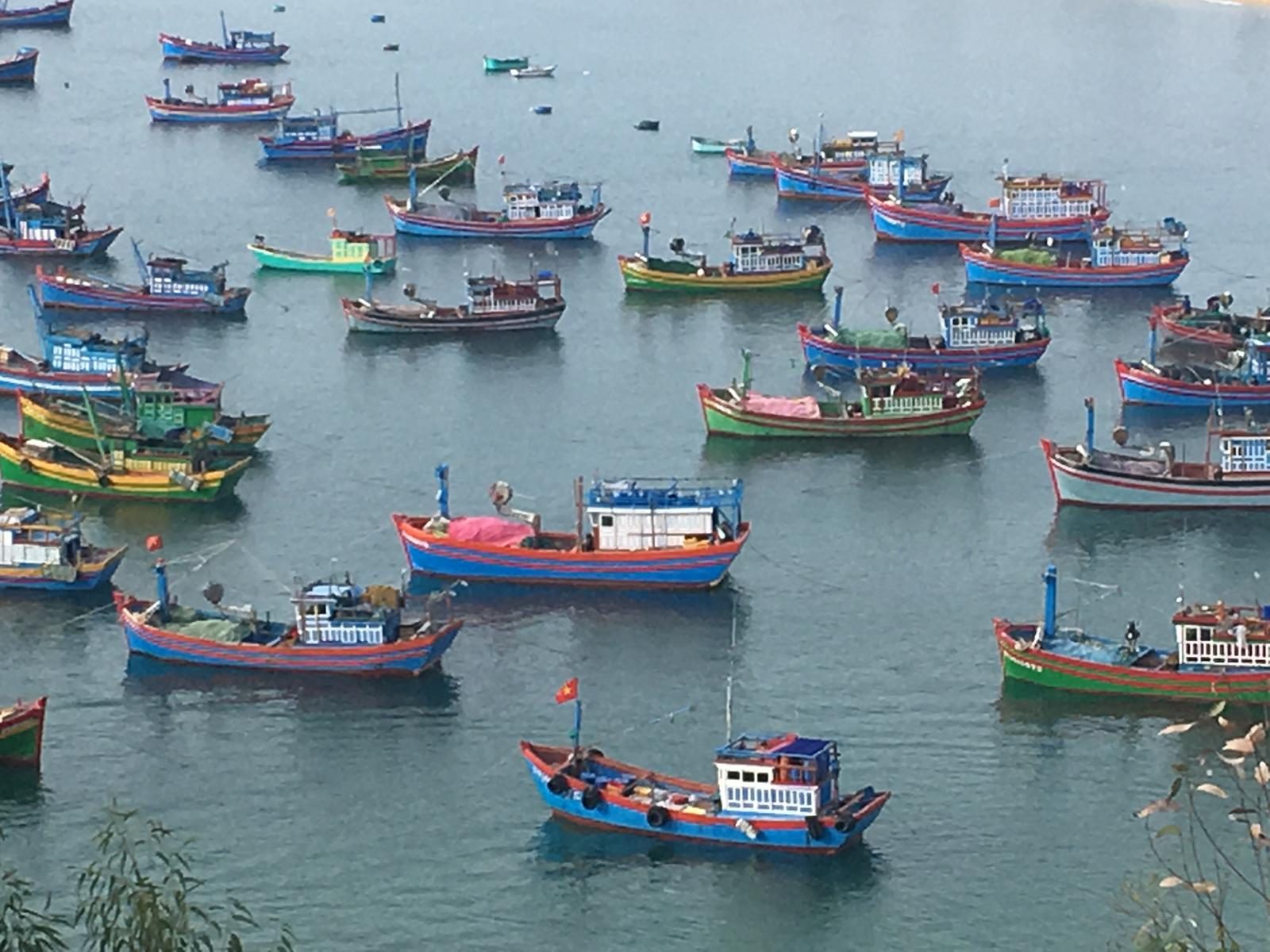 We are very much in functional cycling mode now, so in between days off we’re trying to cover a decent few miles each day. However, as Martina wasn’t too well yesterday we decided to see how we’d get on today …and as it’s turned out we did very well. Martina felt strong all day and we covered 90km on a mainly flat road. We skirted the coast and saw the sea on a couple of occasions which was nice, but nothing spectacular. We had planned to go back to the coast to find accommodation for the night but that would cost us about half a day’s cycling so we stayed on the main road and ended up at Bong Son. Found a great guesthouse with rooms on the ground floor and we were in and settled just after midday.

Bong Son is a small town like loads of others we have passed through and though there’s not a huge amount to it, it’s still very pleasant. In fact we would go as far as to say that all of the villages, towns and cities we have visited in Vietnam have been nice. They are generally quite busy, clean (see point below) and most don’t see many foreign tourists, which we rather like!  Since arriving in Vietnam we have felt safe even when it’s dark, which we can’t say the same for some of the other countries we have visited. Although saying that we are never out that late anyway and are still as much on our guard as we would be if we were walking the streets back home in London.

The north of Vietnam was quite clean and we only saw the occasional instances of fly-tipping. Hanoi, for a large city, was remarkably clean and tidy. But the further south we have come that has changed somewhat, and today was a good example with lots of rubbish along the sides of the road and large areas of fly-tipping.

Another thing that has changed as we have come south is the food. Back up north one of our staples was Bun Cha (sweet noodle soup with grilled pork patties) which has now completely gone from the menu. Ban Xeo (a filled fried pancake) has appeared more, and although we tried it a couple of times up north we found them to be very greasy. But as it’s a southern dish, we may have to give it another go soon. Luckily Pho and Bun (both are noodle soup which we, as ignorant westerners, can’t tell the difference, apart from the fact that Bun is served with a large rice cracker and Pho isn’t) appear to be available just about everywhere.   Also common is Banh Mi (bread – aka a sandwich roll) with lots of different fillings – the most common of which is hot omelette with chilli sauce, cucumber, coriander and shredded vegetables.  This is very cheap (cheapest one so far was 8,000 dong = 28p), tasty and also one of our staples!

Another early get-up and as we were on the ground floor and the bikes just outside our door we were super-quick in getting on the road. Not a lot to say about the cycling except that the wind picked up, and although it was mostly from the side it still made for difficult riding. We stopped half way for an egg Banh Mi and noticed this as we were just getting back on the road….

….seems that they knew Martina would be passing and planted some shamrocks!

Our destination for the day was Qui Nhon, which is a holiday resort for Vietnamese folk.  Although we saw a couple of other westerners we were definitely few and far between. The place we decided on for accommodation had really good reviews and was pretty cheap for the area. But we wondered if the people leaving the reviews had been at a different guesthouse as the place was very basic, was in need of a damn good clean and it’s the first time since India that we’ve had to ask for the sheets to be changed.

After a quick snooze (in clean sheets!) we went to the beach for a dip in the sea.  It was pretty cold in comparison to the other days, but refreshing nonetheless and once again we really enjoyed it.  This is fast becoming a regular thing whilst we’re on the coast. We then sauntered to the far end of the beach and were just sitting on the promenade wall when a chap on a scooter turned up and asked if he could practice his English with us. We said yes and had a lovely half an hour chatting to Jui, a local English teacher and tour guide…

Although we have tried a lot of different food here some of it has become a bit repetitive so today we decided to chance something different, based on what we had seen some locals eating last night. A rice dinner with marinated pork, pickled cabbage, greens and soup – a great change and all very tasty.  We will definitely be having it again!

We had no expectations of Qui Nhon and it turned out to be a really nice town – a bit bling and tacky in a seaside resort kind-of-way, but we’re glad we stopped here. If we were at a stopping point on our journey we’d be happy to spend a couple of nights here – but unfortunately it’s only a one-nighter.

Today’s route took us along an unexpectedly nice part of the coast as we headed south. We were in and out of small bays, up and down hills, getting brilliant views all the way.  There were a few local leisure cyclists out early as it was a Sunday morning, all of whom  said hello as they whizzed passed us. One group were taking photos, so we decided to stop to have a look and do the same.  And we’re really glad that we did as it was this beautiful scene of multi-coloured fishing boats in the bay below…

Apart from the fantastic route the riding had one other ‘feature’ – a very strong blustery wind.  In equal measures it helped and hindered us throughout the day. At one point it was a full-on headwind which was particularly tough and felt like we were peddling through treacle. Most of the time, however, it was a more annoying sidewind which made our bikes difficult to control.

We made it to Tuy Hoa just after midday – and despite the wind we’d made good time. Tuy Hoa is another tourist resort, but definitely hasn’t been finished yet! The beach area was like a ghost town with a combination of derelict buildings that need to be knocked down and brand new hotels.  There were hardly any people and not even many scooters, which just isn’t Vietnam!

We wandered down to the beach for our customary dip in the sea – we did get in, but the shape of the beach meant that the currents were very strong, so we decided to cut it short. We walked along the eerily quiet beach and back through an almost deserted town. At least our snooze was nice and quiet!

We walked into a busier part of town for dinner which started with a vegetarian rice meal which was really nice and a welcome change to the other meals we’ve had lately. We walked a bit further and stopped at another place for some Chao Vit – sloppy risotto, but this time with duck. I have to have two dinners at the moment as one isn’t enough! We ordered one meal and two arrived – something had got lost in translation, so Martina also had two dinners this time – both of which were very tasty!

It’s been pretty tiring over the past few days as we have put in some long days in the saddle, so we planned as a shorter day today with ‘only’ 80km to get to Ninh Hoa.  We passed through the centre of Tuy Hoa on the way out of town and although it was a bit more lively than the beach area, it wasn’t that inspiring, so we were happy to be moving on.

The wind was definitely still there – blowing us about a bit, but not as much of a problem as yesterday. Early on there was a small range of hills for us to negotiate which gave us some nice views.  We cycled by this huge knobbly rock, which almost appeared to be man-made as it was stuck on top of a hill, but it is natural…

A little further down the road and unknown to us there was a long expressway tunnel, which we weren’t allowed through. We might have made a dash through other tunnels recently, but this one also said no motorcycles, so we decided not to chance it. So it meant we had to go up and over the hills, adding about 13km to our day.  But once we were up over a reasonably tough climb, we were rewarded with some stunning views of the coast…

About 20km from the end of our cycling day a girl on a scooter stopped Martina and gave her an iced watermelon drink – just like that, straight out of the blue! I had a slurp as I didn’t get one!

We still made fairly good time and got to Ninh Hoa at 12:30 and found a decent guesthouse. Five days of 90km+ have taken their toll and after lunch we both konked out for and hour and a half.

Though “cake-watch” is still active it has come in fits and starts whilst we have been in Vietnam …with one exception.  These cakes are found in Martina’s favourite supermarket Big C, which we religiously pick up every time we visit one…

We have no no idea what they are actually called, but we have christened them loafers!