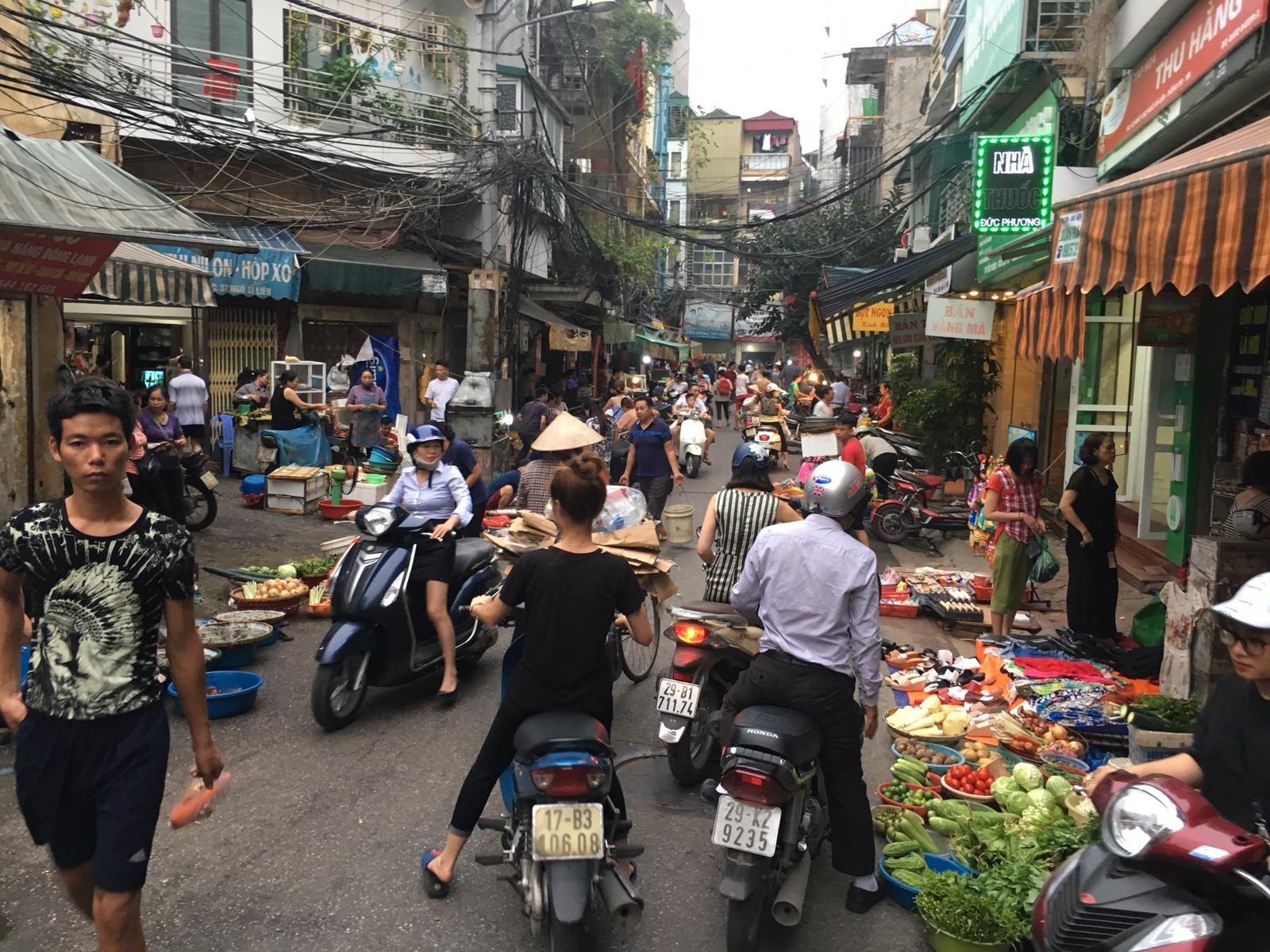 We arrived in Hanoi feeling pretty shattered so we were looking forward to some time off but also to being back in a big city.  And Hanoi didn’t disappoint.  Our accommodation was a fantastic apartment right in the middle of a bustling daily local food market….

….which was only 10-minutes walk from the Old Quarter.  So we had the best of both worlds….getting to know the locals with our daily purchases of fresh fruit, bread and eggs within spitting distance of all the tourist sites.

It gave us a chance to experiment with new fruit that we had never seen before such as mangosteen (on the left) and fresh lychees, both of which are very tasty.  BTW we found out that the unknown fruit in our last blog was passion fruit….should have known from the taste but we had never seen one before!

Hanoi is just steeped in history, very little of which I knew about before getting here.  So it was a bit of an overload taking it all in.

We visited “Uncle Ho’s” mausoleum, where Ho Chi Min, the father of modern communist Vietnam’s embalmed body is on display.

Unfortunately for us, the body was away for “maintenance embalming” so we didn’t get to see him, but the rest of the complex, where he lived and worked, was really interesting and worth a visit, including his traditional Vietnamese “house on stilts” residence…

The Hoa Lo Prison, (aka “Hanoi Hilton”), where US Senator John McCain was a Prisoner Of War during the Vietnam War, was absolutely fascinating and we spent a whole morning there.  Its role in the Vietnam War alone made it interesting, but it had much longer history than that as it had originally been built by the French. They imprisoned Vietnamese communist political activists there during their reign and therefore it was also a place of torture and terror for the Vietnamese.  However it was interesting to see the rather one-sided narrative around the Vietnam war with a focus on how well the Americans had apparently been treated while “living” there against how the French treated the Vietnamese when they were there – reinforcing how divided the world had been the US decision to go to war in Vietnam.

Keeping with the theme of the Vietnam war, in our search for a supermarket one afternoon, we just happened to come across an open-air Air Force museum. Amongst Vietnamese Air Force equipment there was also wreckage from US aircraft shot down above Hanoi. Quite eerie and sad to get so close to a piece of such recent history!

We visited the Thang Long Imperial Citadel, which had originally been built as an imperial residence but became the main command centre for the Vietnamese during the war. There we saw the big tables, both above ground and in a bunker, where the Generals made all their decisions….

And we learned that in 1979, four years after the Vietnam War finished, China went to war with Vietnam – and again the Citadel was used as their main command centre.

What was amazing to us both is that despite the narrative focusing on how mighty and victorious the Vietnamese were against both the French and Americans, they seem to harbour no long-term grudge against either country and are welcoming to everyone. Maybe there’s a lesson in forgiveness in there for us all?

Thankfully the city isn’t all about war and has lots more to offer by way of interesting sights including St Joseph’s cathedral, which was built by the French in 1886 in a similar style to Norte Dame…

Before we arrived we had been in touch with an international English School via WarmShowers.  One morning four of its students acted as our tour guides around the Temple of Literature, Hanoi’s first National university and a temple dedicated to Chinese philosopher Confucius and his scholars.

Confucius is revered like a God here and features in lots of temples – undoubtedly stemming from the many years of early Chinese domination of Vietnam.

Our tour was followed by lunch in the Old Quarter, which as the name suggests is the historical centre of the city. (It does turn into London’s Westend equivalent at night though!). It’s made of lots of little streets known for the cluster of very specific shops in each street….we seemed to have visited the Street of Door Handles & Locks, Street of Kitchen Utensils and Street of Stuffed Toys! The morning with the boys was great as we got the benefit of local knowledge while they got to practice their English – a win-win!

The city has a lively nightlife and a drinking culture that reminded us of German breweries….cheap beer in a noisy place full of locals! We were introduced to that scene by an American cyclist Larry, who teaches English here, which was very enjoyable night…

There’s also a quirky railway line that runs down the middle of residential and business streets.  The locals just know when to get out of the way when the train comes and then resume whatever they were doing without even blinking when it’s gone!

True to form Nigel developed another bout of the “sh-arts” during our visit here so was bed/toilet-bound for a day, but even that didn’t dampen our enthusiasm for this great city. It is definitely up there among our favourites and one we would highly recommend it despite the squillions of scooters on the roads and pavements – both parked and riding!  There were so many more here than we have experienced anywhere else in the world, which made walking around the city and crossing the road a sport on its own right!  (And we have to cycle out of here on Saturday!) It’s because they don’t have a decent public transport system so everyone seems to have a scooter to get around ….and early morning and evening rush hours are a sight to behold!

But to counteract that chaos there is a lake right at the edge of the Old Quarter so it never really felt like the noisy, dirty city that we were told it was.

We extended our planned stay for 2 extra nights, partly to give Nigel a chance to properly recover and partly because there was so much to see and do!  Writing this makes me realise that we didn’t really have much of a rest after all…..and I haven’t even included everything we did! But it’s definitely a city worth visiting. Not only are there lots of interesting things to see and do but it’s also really cheap eg the tourist attractions were £1 each to get in and a meal can still be as cheap as £1 per person.  The people are also genuinely nice and friendly.  What’s not to like?!

Back on the road again tomorrow and we head towards the coast, which will be our first time to see the sea in quite a while.

Two funny pics of the week.

This scooter was parked outside our door one morning….what could possible go wrong?!

And is this a sign for money laundering Vietnamese style??