A sea of lanterns 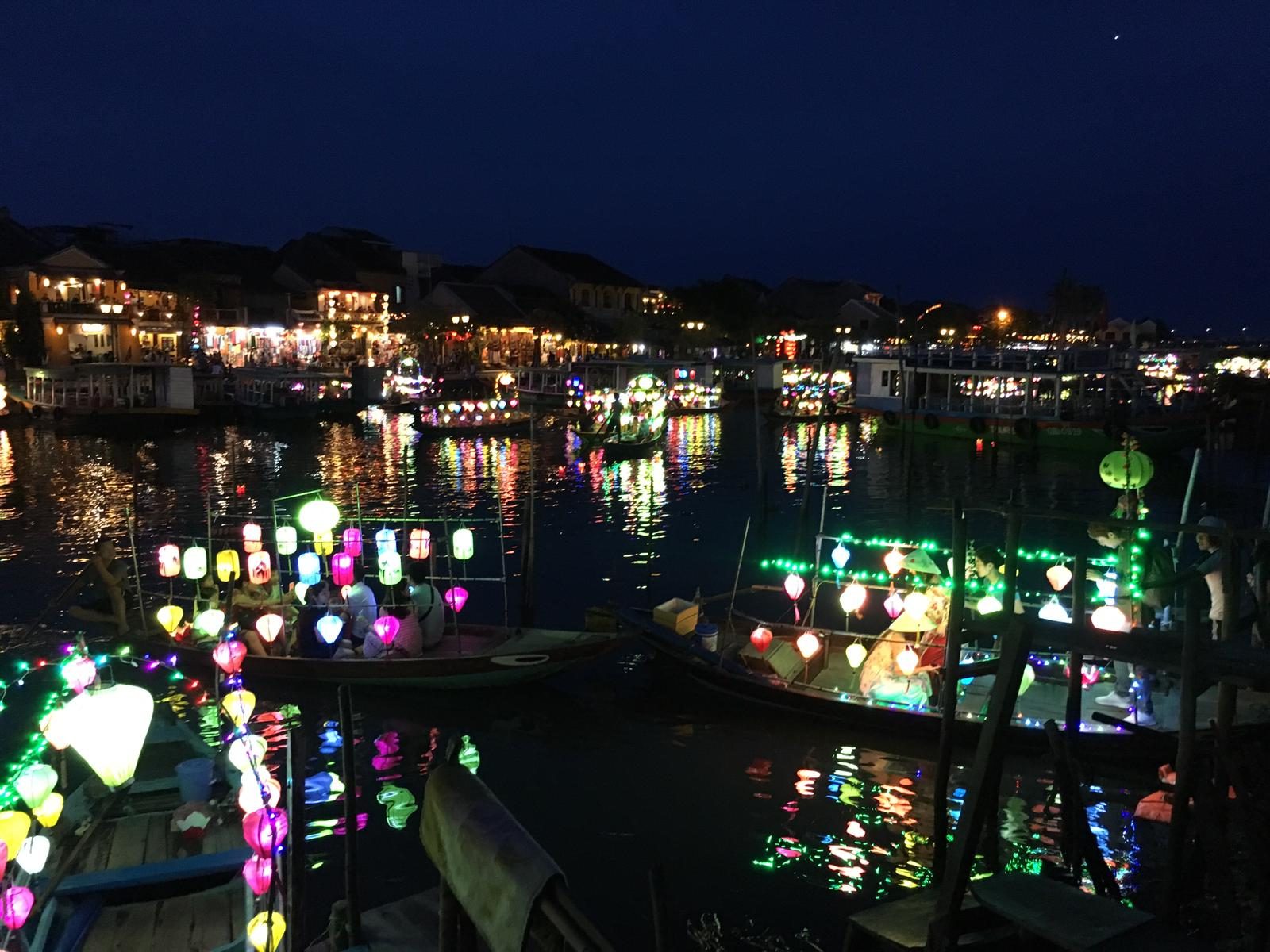 After our full-on but enjoyable afternoon and evening in Hue we gave ourselves a bit of a lie-in so we could enjoy a hotel breakfast before we left.  Fried eggs and fresh rolls with proper butter…..divine!  We were still on the road for 6:30 and although we took a secondary road, there was an inordinate amount of scooters ….and we had no idea why!  Our route took us through some lovely country roads and villages with lots of Sunday morning activity and markets.  Although we were close to the sea we couldn’t see it for a lot of our journey, but when we could it was beautiful….

We cycled along the far shore of this inlet, which was fantastic…

Lovely cycling ..that is apart from a couple of buses that were obviously doing luggage pick-ups and would aggressively overtake us before pulling in about 50 metres later to load up more luggage.  The road was narrow with a sandy edge so at the start I got off my bike to let them pass, but this got annoying when they would repeatedly overtake and pull in, so eventually I adopted Nigel’s attitude of “F*** them, they can wait” and cycled towards the middle of the road.  Eventually we got back on the main highway, which unfortunately involved cycling through two tunnels….neither of which were particularly long – but they did have signs to say no bicycles.  But we are now bona fide rebels so we put a bit of speed on and whizzed through them… and no one batted an eyelid.

After a couple of cooler overcast days the heat has returned again so it was also pretty hot cycling.  And as well as prickly heat I now have blisters on my lips as the strength of the sun has obviously increased the further south we have come.  So I bought myself a face mask this morning to cover my face….which does seem to work and is definitely in keeping with the locals as everyone on the road wears one (note the girl on the red scooter in the background!).  But not recommended when going uphill as it definitely restricts your breathing!

We reached our planned destination around 12.30 and although it was along the highway it was also close to the beach, so after check-in we set off for a dip to cool-off.  It was obviously a beach that is included as part of a tour as the only other people there were other westerners who had either arrived by jeep or motorbike. We have seen quite a few westerners on motorbikes on the roads over the last couple of days and we expect it might continue that way until we get to Ho Chi Min as the Hanoi to HCM route was made famous by Top Gear a few years ago.

…and we were just back to our hotel when the storm set in – a perfect excuse for some lunch and an afternoon snooze.

For dinner we headed out towards the back of the hotel which took us alongside a lagoon full of oyster farms and an amazing sunset.

The town itself has quite a strange layout….basically the main highway goes right through it and there are lots of cheap roadside eateries for truckers and locals.  The lagoon area is where the posher fish restaurants were and quite a few western tourists were arriving in buses for dinner as we passed.  Needless to say we opted for the cheaper restaurants and returned to our digs for an early night.  As we arrived at our hotel a Canadian guy, Marco, was having dinner with the family who own the hotel and invited us to join for a beer and a chat…..which we did. Although we weren’t eating it was our first proper family meal experience since we arrived in Vietnam, which was a loud, raucous and great fun experience.  A great end to our day!

Today started with a puncture repair on Nigel’s back wheel before we set off over Hai Van Pass (avoiding a long tunnel) which took us over some hills…passing this little fishing lady on our way out of town.

Although it was only 6:30am when we were climbing, we were definitely sweating….but oh my god was it worth it.  The views were amazing!  On one side we had amazing views looking north to the beach at Lang Co where we swam yesterday….

….and on the other side it was equally spectacular views south to Da Nang Bay…

And the descent was great too…..instead of a hugely steep decline as can often be the case after a big climb, this was more of a “wheeeeee” for the entire 10km downhill.  A great start to a Monday morning!

We decided to do a supermarket stop when we reached Da Nang, and I have no idea why we thought this was a good plan as it meant going right into the centre of a city with a population of 1.2 million people, which was awash with manic scooter drivers. Nightmare!  But provisions acquired (and I love a good supermarket anyway!) we were back on the road for the last 35km to Hoi An. Disappointingly the route didn’t give us the beach views that we had expected.  But never mind…we made it in the knowledge that we would have 2 days off to relax. Later in the afternoon we had a massive storm and a downpour for about 30 minutes, which literally flooded the streets…

A huge difference from the baking heat we had arrived in just a few hours earlier!

Hoi An is a beautiful ancient town and UNESCO world heritage site along the Thu Bon River.  It also claims one of the top beaches in the world, but as we had done a few beaches recently we decided to just chill out in the old town area, which was remarkably quiet during the day.  The town was once an important trading port bustling with Japanese, Chinese and Dutch traders and it still has an active tailoring trade.  Its architecture is unique in that all the buildings in the old town are yellow, with their entrances facing the street and back doors facing the river.  No idea as to the origins of the yellow but one theory is that is symbolises luck, pride and prosperity to the people who lived here. The whole place is like an outdoor gallery and it was just lovely to walk around with nothing to do except take it all in!

Hoi An did remind us slightly of Luang Prabang in Laos, which still goes down as possibly our favourite place in SE Asia. But Luang Prabang was in a nicer natural setting of mountains and waterfalls as well as being much quieter and less commercial, so a much more relaxing experience.

At night time every tourist from far and wide seemed to decend upon the old town, which was completely lit up with hundreds of lanterns.  Magical in once sense but the scrum of western and Asian tourists unfortunately detracted from it a bit.

There is a Chinese side of town, which had some amazing temples…

…one of which had these fantastic dragon sculptures….

Having had initial success with cakes in Vietnam we haven’t had much luck recently, so we decided to try out some sweet potato cakes with savoury fillings, which we have seen for sale over the last few days. One had a green tea filling and one had egg…..both were heavy, dense and equally unappetising.  So disappointing and slightly gross! The egg even included a cooked egg yolk…

But cakes aside during our couple of days here we enjoyed some fantastic food, a few beers, a foot massage (me!) and generally relaxed, which quite honesty made is both feel more tired than when we arrived.

Despite being tired last night neither of us had a great night’s sleep….it’s the psychological thing of knowing we have to get up early after a few days off I reckon.  We were on the road just after 6am and had 110km of boring straight road like this….

….with one small dramatic episode along the way.  We had 2 different destinations in mind today and depending on how we felt at the time we would decide on either a 90km day or 110km day.  Around 90km Nigel stopped to ask if I was OK to push on to the further one as it was only 11.30. Yup, happy with that – and I was just about to start pedalling again when a weird feeling came over me.  I had to get Nigel to hold my bike pronto as I needed to sit down, which then turned into lie down and roll around uncomfortably for about 45 minutes at the side of the road.  I was sweating hard, had stomach pains, thought I might be sick and no matter what position I got into I couldn’t get comfortable.  Nigel made me move into a shaded area under a tree but nothing was changing and I couldn’t cool down as our water was hot! There was a guesthouse a few kilometres down the road but the thought of getting there was starting to panic me as I could only sit up for a few minutes before having to lie down flat again. Fortunately we were outside a house and having seen us there for a while the woman inside invited us in.  I was absolutely covered in sand and gravel from head to toe from rolling around like a donut in sugar, but the woman didn’t seem to mind, and pointed me towards low wooden table to lie on.  I didn’t need a second invitation and literally threw myself on it while Nigel took off my sandals.  She rigged up a fan to cool me down and shortly afterwards her daughter/daughter-in-law arrived with lemon juice in iced water and sugar…all communicated via Google Translate.  The combination of the fan and drink did the trick and I could literally feel myself get better as I drank.

What was really nice is that they didn’t fuss or hover over me and left me and Nigel alone while I recovered.  After about 30 minutes I was starting to feel normal again and a young guy, probably grandson, with a little bit of English arrived to ask if we wanted lunch and to ask if I was OK. We declined lunch and decided I was feeling well enough to move on…but not before taking a photo with these wonderful people.

I felt well enough to push on for the final 20km and maybe it was the state I was in when we arrived but the guesthouse owners greeted us with big hugs, cold water and Oreo cookies, which was just what we needed!  Lunch in our room and an afternoon snooze and I felt almost back to normal.

If any friends or family reading this are worried about me, no need.  A wise friend of mine said “there is a fine line between pushing yourself and being reckless” and I couldn’t agree more – and even if I wanted to be reckless (which I don’t!) Nigel wouldn’t let me, so I am in safe hands!

We ventured out for dinner in the early evening to realise that Quang Ngai is quite a nice place with a lovely river front and an interesting temple with all female monks and some very bling statues….

As we have come further south we have seen many more monks and temples than we did in the north.  There is also much more chanting and gong-banging, although apparently Christianity is on the rise in this area as well.