Route into Istanbul from Greece: information for other cyclists 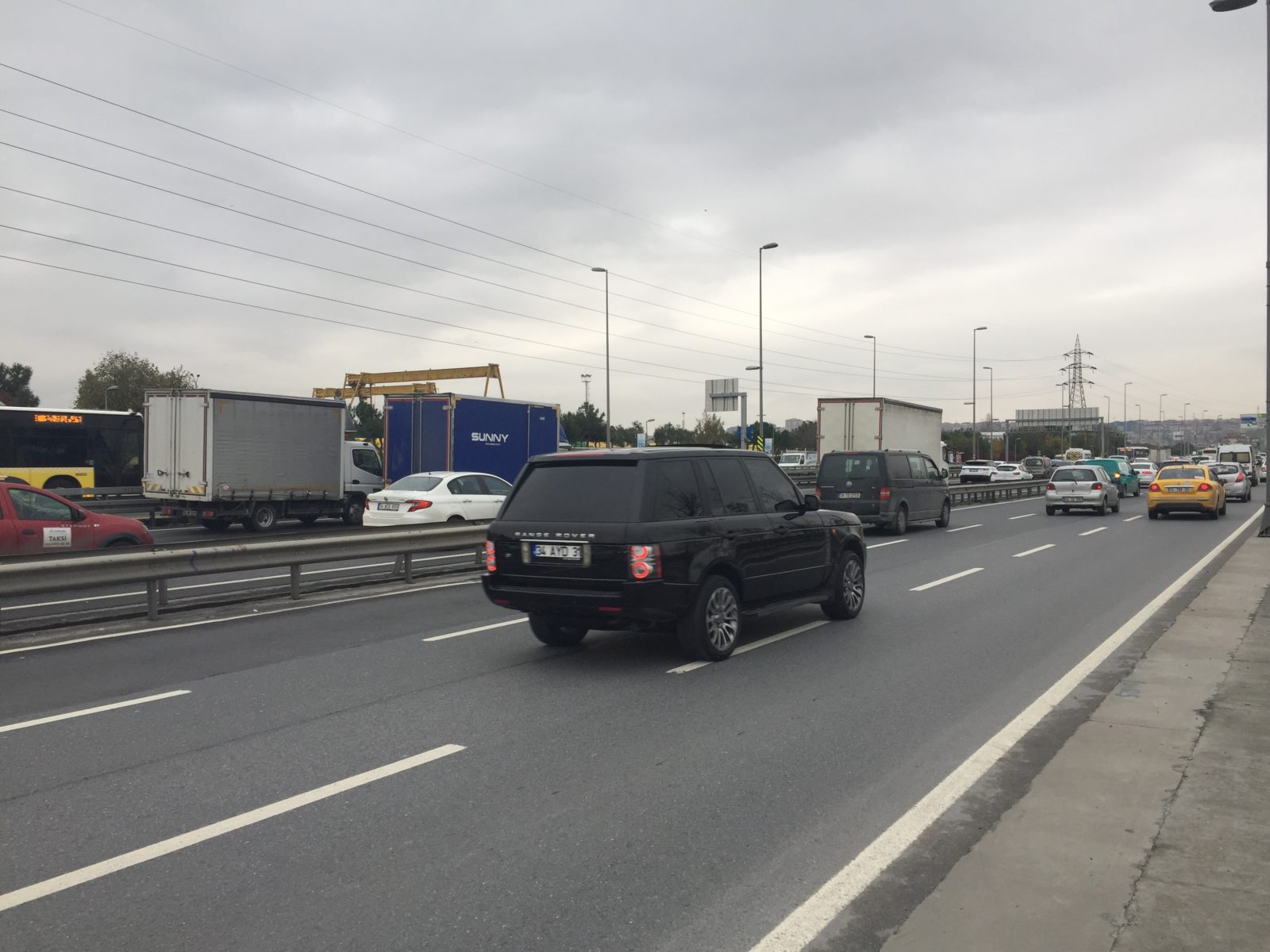 Out of Kavala we took the Old National Highway, the Blue Route 2 and found it to be reasonably quiet with just a few tough (ish) climbs. Apart from the mountains to the north, the road is a rather dull as far as scenery is concerned until the National Park of Nestos Delta and lakes Vistonida-Ismarida, which are south-east of Xanthi and both very nice. The church and monastery of St Nicholas are worth a visit.

The Blue Route 2 continues past Komotini, which is quite industrial, and then on to Sapes. This part was surprisingly busy with traffic, but we found the Greek drivers throughout our 3.5 weeks to be very courteous so this wasn’t a problem. The road then takes the same path as the old Roman road, the Via Egnatia, towards Alexandroupoli on the coast. Very pleasant cycling through the hills – never too steep on the way up and a gentle glide on the way down. East of Alexandroupoli we stayed overnight in Loutros where there are hot springs – unfortunately we just missed them as they close at 3:30pm in the winter.

The Blue Route 2 continues through Feres towards the border with Turkey.  Staying on this road keeps you off the main E90. It stays nice and quiet and even though it crosses the E90 onto what feels like the ‘wrong side’, if your stay on it you still enter the melee of traffic with all the trucks and cars and into the correct line to cross the border. We had our eVisas on our iPhones and the border officer was more than happy with them, so our passport check took a matter of 30 seconds. The customs officer made us take all of our bags off, gave them a cursory check inside then said it was fine and after repacking we were through. With a bit of queuing the whole process took about 45 minutes.

In our opinion Blue Route 2 is a nice safe road for cyclists to take to the border with Turkey.

Once across the border, the Turkish E84 is a big wide, nearly empty, 2-lane road with a wide shoulder – so it’s nice safe cycling, if not a bit dull.  But there are some though hills to tackle. 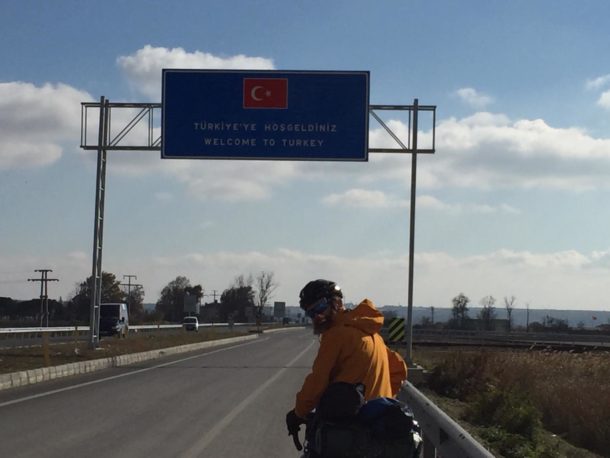 We stayed in Kesan where there is cheap accommodation and food in the centre of the town.

Kesan to Tekirdag – 84km of dull 2 – 3 lane roads with a wide shoulder, which means safe cycling. We had a fierce head/side wind on the day we did this and there are some monster hills that just keep on going so even though the distance isn’t huge it was physically VERY tough-going. Best not to underestimate the wind on this stretch. It’s also very boring with nothing of interest to see. The final 8km into Tekirdag is thankfully down hill!

Tekirdag to Silivri – the E84 continues along the coast and slowly gets busier, but nothing too bad and for much of it there is a hard shoulder to cycle on. Past Marmara it definitely gets busier and about 20km after this we took the D100 to continue along the coast (The E84 goes inland at this point). The D100 isn’t the nicest road and the safe shoulder disappears here, so it all gets a bit more nervy and the traffic is quite heavy.  We tried using what I can only describe as a service road which runs through built-up areas along the side of the main road. Difficult navigation and it keeps going back to the main road, In Silivri it all starts getting very busy along this side road! We stayed with a WarmShowers host here.

Silivri to Avcilar – the further east from Silivri you get, the busier the road. On Google Maps and other mapping there appears to be a service road running alongside the D100, but this is in fact a 2-lane highway with the main 3 – 5 lane highway in the middle. At Buyukcekmece we went into the town itself for lunch, followed by a monster climb out of the town back to the main route. I believe that the main route (D100) also has a tough climb. In our case it also chucked it down with rain at this point, which was nice! Back on the main D100, which is VERY intense as the 2-lane side road has lots of traffic including buses and taxis, which are stopping and starting, pulling out and pulling in, etc, etc. Turkish drivers are not as courteous as Greek drivers and we had numerous near misses. For cyclists we thought this 20km+ section was very dangerous. We stayed with another WarmShowers host here.

Avcilar to Istanbul – The dangerous road continues over a bridge just east of Avcilar for about 2km.  We then took a route which went south along the coast and around the south side of Ataturk Airport. There is a bike path which is very quiet and a welcome relief after the mayhem of the main road. 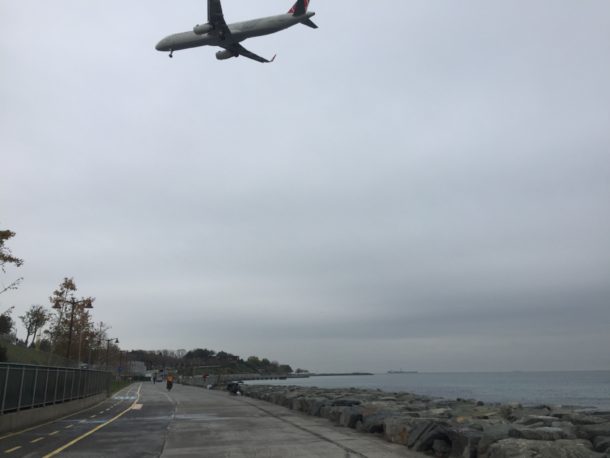 We then joined the Rauf Orbay Cd which was busy and that took us onto the Kennedy Cd. We had been told that Kennedy Cd would be quiet – and true enough compared to the main D100 it was quieter, but it was still very busy and there was no shoulder… but at least the cars were travelling much slower.

Central Istanbul – we cut north off Kennedy into the centre of town. Not much to report except that the roads are narrow and there’s a lot going on – but at least it’s generally moving slowly!

Overall this route started well, if a bit dull and physically tough, and then turned into a cycling nightmare! The wind and hills shouldn’t be underestimated, nor should the D100 or the Turkish drivers! One very positive point to highlight is that we had very little interaction with dogs on this  entire route into Istanbul. We’d heard horror stories about packs of dogs chasing cyclists, but we only had about half a dozen incidents in total along this route – some in Greece and some in Turkey, and only a few dogs involved at any one time.