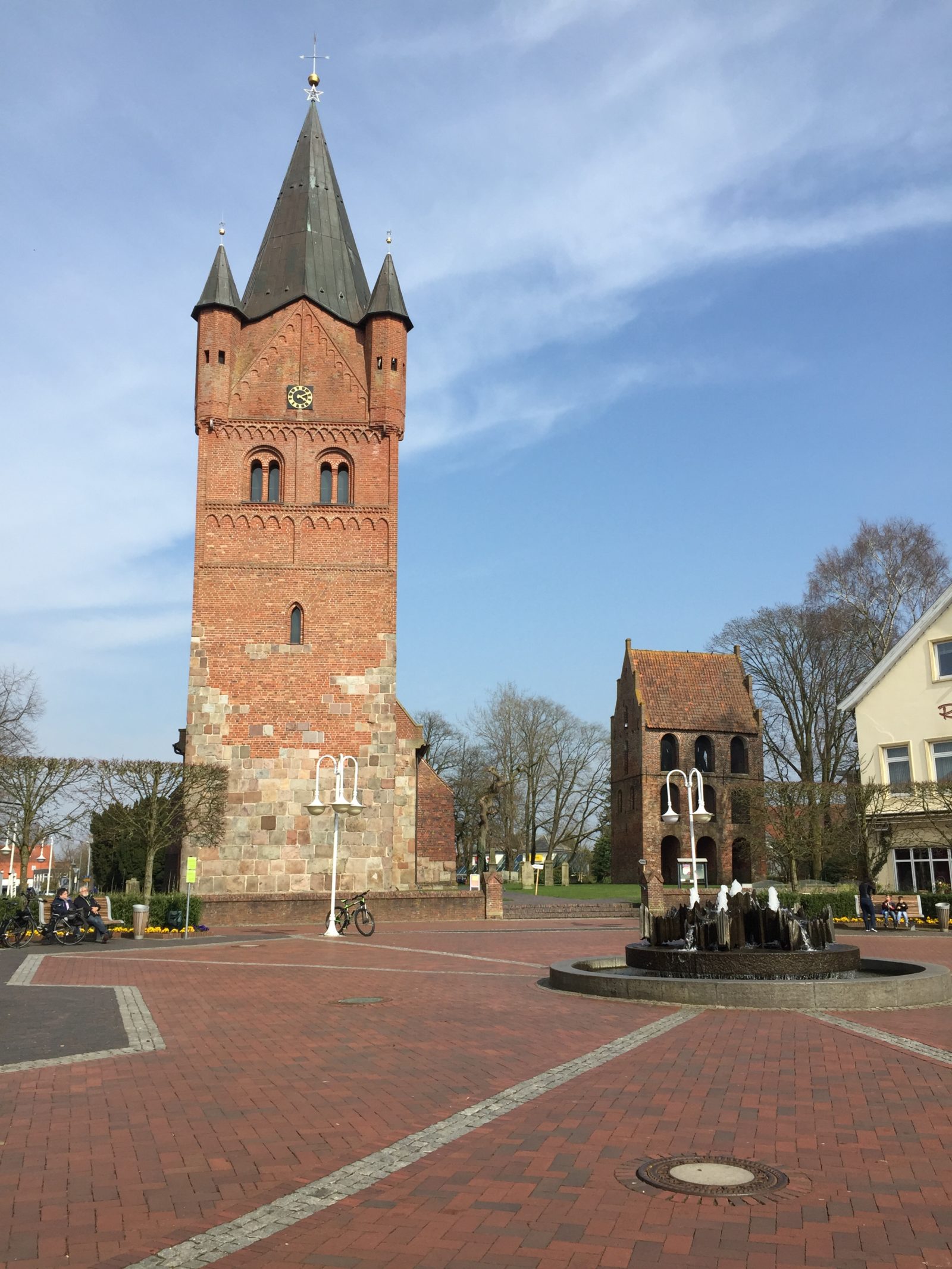 After 12 consecutive days of cycling we have successfully made our way to our friends Miriam and Marc’s (along with kiddies Niamh and Connor) house to the north of Bremen.  More on our visit here in a later blog.

As we said, we crossed the border into Germany and the winds didn’t let up, in fact the headwind got stronger and the next 2 days were a real battle, the hardest yet.  The weather forecast for the first couple of days in Germany weren’t too good, rain and occasional thunderstorms, but we decided to camp at a site just outside of Leer.  Nice enough and still well out of season so we were almost the only ones there.  Having a native German speaker (Martina) would also be a bonus, though I did wonder when we got to the campsite when Martina said in her best English “excuse me, do you have space for 2 and a small tent please?”!

A quiet night and up in the morning to grey skys and the threat of rain – 30 minutes in and the rain started as we were packing up, so we made the most of the toilet block by rushing our things in to dry it all out!

Stopped briefly in the lovely town of Westerstede in the square for a breather (see main photo) – would have actually like to stay a bit longer really, especially as the sun was out.

We battled into wind to Oldenburg and booked into our first hotel as the forecast was for thunderstorms overnight. Although this felt a bit like luxury we both agree that it also felt a bit restrictive as we have got used to being in our own home (tent) on our own patch of a campsite. Oldenburg is a nice enough place and we were up by 8.30 to find breakfast and somewhere to blog.  A slow paced morning eating a monster breakfast, blogging – then packed and out.

(Tired puffy eyes in photo – mainly caused by down feathers in or sleeping bags).

We then had a right old GPS faff! We’re still getting the hang of using it and this particular morning it was unable to calculate a route for whatever reason and was running out of memory while it was calculating.  There had been no problems in Holland, so it might be that the German part of the maps are more complex than the Dutch parts? Whatever the reasons we now have to split the routes into smaller chunks.  The routes that the GPS is calculating can be a bit ‘around the houses’ too, so we have to look closely to see where it is taking us – it can add significant km to our day if we are not careful. It took us a while to work through the GPS/operator issues and we then found that the only way (or so we thought) across the River Weser was to go all the way to Bremen although Miriam and Marc live a considerable way north of Bremen.  We worked out that this was going to be a much longer day than the 45km we’d initially planned – more like 80km+!

Oldenburg, Wursting, Hude and then into the lovely outskirts of Bremen! Then the rain started properly – it had been on and off up until this point and then the buckets started.  North out of Bremen through industrial areas and Turkish suburbs through lashing wind and rain. We did finally made it to Miriam and Marc’s by about 7.15.

A little bit of a kit review at this point – we’d been through pretty torrential rain for a fair part of the day by this point and our wet weather kit held up remarkably well and it was only our own errors that led to being a bit damp (water wicking up through exposed under-clothes). Arctyrex coat, Madison dry trousers and Lusson over-boots all worked well.  They are all reasonably new, of course, so it remains to be seen as to how robust they are in the future.  The Ortlieb panniers are also really good and all of our stuff was completely dry.

So, enough of the ‘monster struggle’ through fire and flood! A couple of remarks by Martina recently made me chuckle and I decided to try them out on Miriam before putting them into the blog – her reaction was significant enough for me to think it is worth it. Whilst in Leeuwarden, Martina spied a bike across from the cafe we were sitting outside and said “look at that, a bike over there that has an Irish flag on the back of it”…doh – it was hers! Then in the, nearly empty, campsite in Leer (whilst on her own) Martina thought “that’s a nice couple of bikes chained up over there, and look one has an Irish flag on the back of it…..”! Not content with that she then told me…say no more!