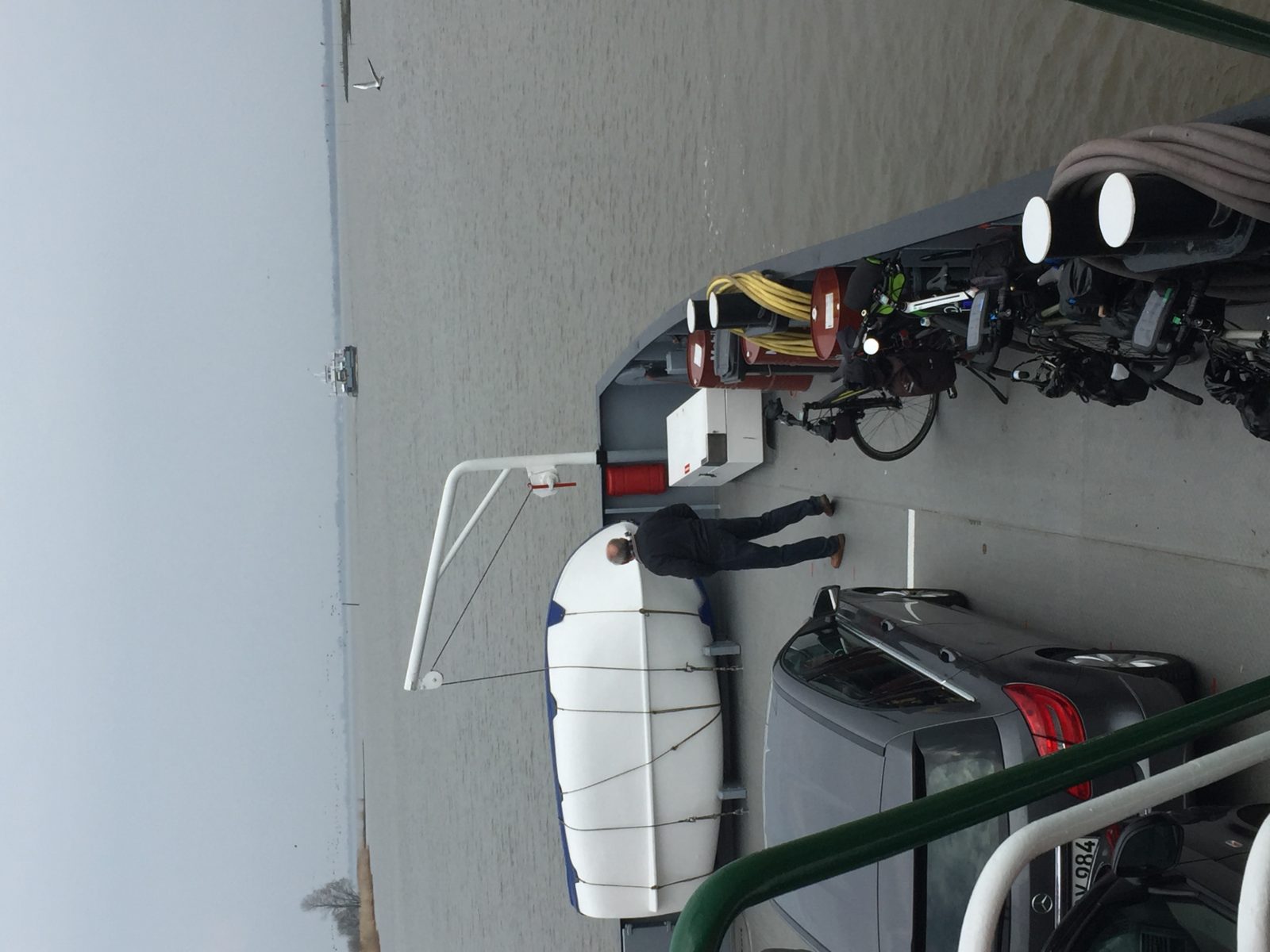 Myself and Nigel are getting with the lingo in the Lower Saxony region of Germany. “Moin Moin” is the general greeting for hello, which we have been using to excess..greeting every pedestrian and cyclist we meet just to feel like we blend right in…!

Anyway, after 7 hours of constant rain on Friday 13th, we arrrived at my friend Miriam’s like 2 drowned rats – just in time for dinner (what a coincidence!!) Miriam is one of my oldest and best friends, so it was great that we could work in a visit to see her, her husband Marc and 2 kids Niamh and Connor, in a quiet rural area just north of Bremen.  And the timing was perfect weather-wise, as the 2 days we stayed with them it rained for most of the time. But it was the perfect excuse to rest up, clean our bikes, be lazy, get all our washing done and  get fed and watered like a king and queen – Nigel even gave his first guitar concert to a very captive audience! 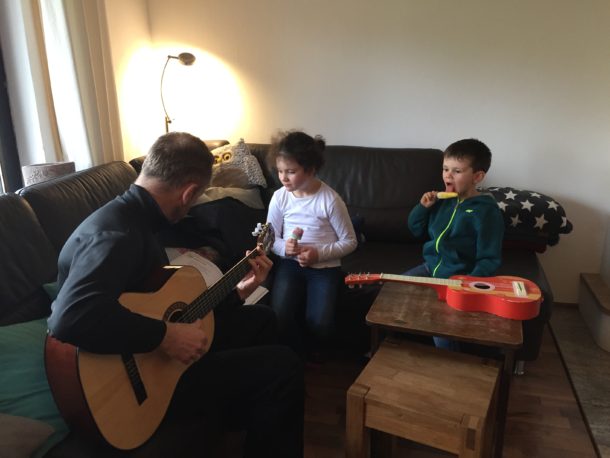 We also upheld the German tradition of afternoon coffee and cake while we were there – it seemed rude not to, with all those amazing cakes on offer. Mind you this bakery offering wasn’t a patch on the home made cake Miriam made on the Sunday – definitely the best cake of the weekend.  Thanks Miriam! 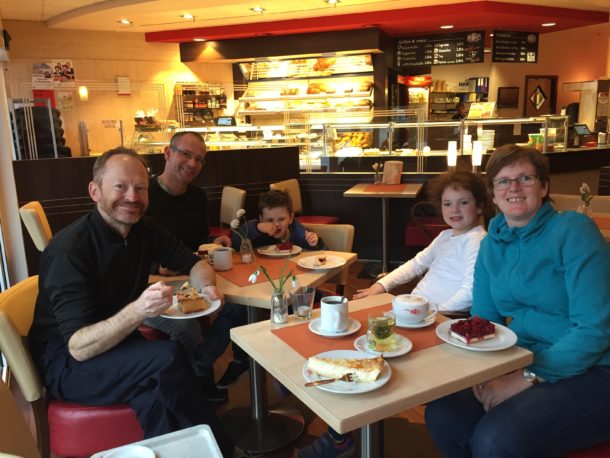 My favourite quote of the weekend was from Connor – aged 4.  He asked Miriam if we had children and when she told him that we didn’t, he asked ‘Have they sold them?’..so for any parents reading this, that is really a feasible concept to a 4-year old…so maybe give it some thought if you ever need to!

Our resting and eating over, we departed from Luebberstedt early on Monday morning after some tears and lots of hugs.  Sat Nav took us through some wet woodland tracks and we experienced our first hills since leaving the UK, but it was a lovely cycle in the German countryside. Nothing spectacular to report until we got to Wischhafen to take a 20-minute river ferry across the Elbe to Glukstadt. 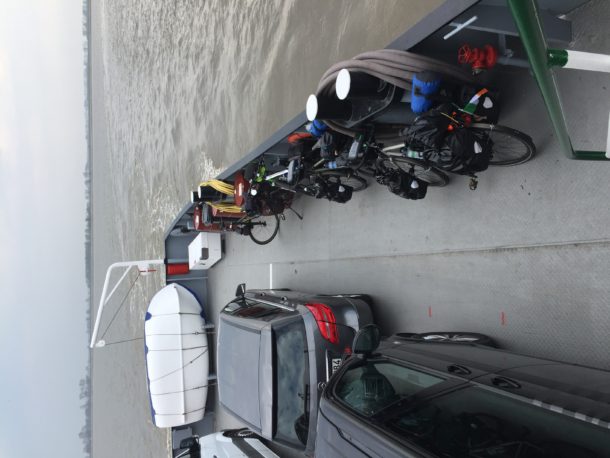 There was a massive queue of cars and trucks waiting when we got there, but the beauty of bikes is that we cycled to the front and were waved right on… to be rudely overtaken by 2 German cyclists who rushed passed us to get on first. Grrrrr!

We had a campsite in mind, so made our way there through some pretty non-descript farmland – and arrived at Fahrhaus Hodorf be greeted by land owner Klaus who was very excited to have us to stay – and almost immediately cracked open the beers. We were the only campers there so had sole use of the lovely warm kitchen facilities and living area for the evening and the next morning for the princely sum of 3 EUROs – what a bargain!  After dinner we had a lovely beer sitting on the top of the dyke overlooking the river Stor –  and some amazing stars to be seen before a 9pm bedtime. We reckon we covered 90km, so we were pretty bushed! We did manage our first game of cribbage and the score at the end of day one is one game each..no doubt this competition will continue throughout our journey so we’ll keep you posted whether you want to know or not! 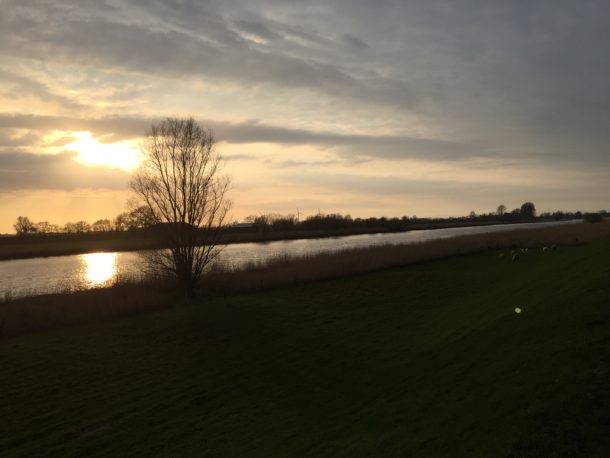 9am departure on Tues morning took us through some lovely farmland countryside, with some undulating hills and into Wacken, the home of Germany’s biggest annual heavy metal festival – not that we saw any long-haired rockers as we cycled through. We then crossed the Kiel canal to make our way north to Heide, a lovely market town, where we stopped for a quick break. 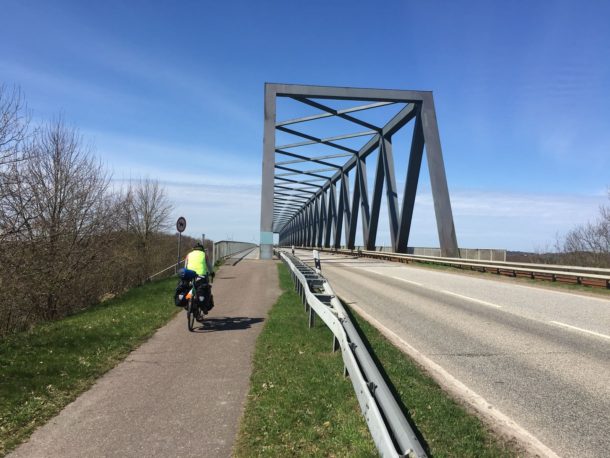 The Sat Nav took us a roundabout way to our end destination, Tonning – but it was along the coast and relatively pleasant, until fatigue set in on the last hour.  It was over 100km day, so the last hour definitely took it’s toll. But we set up camp, had a beer and all was well in the world again listening to the frogs and birds on the campsite before bedtime – to be rudely awakened by the grounds men in their tractor shredding wood 2 pitches down from us.  The joys of outdoor living!

We have definitely turned into professional campers and by that we now rate each campsite –  like all good caravaners and campers do apparently. Our top priority it the shower – and Klaus’s has been the best so far. Second to that is whether there are any bushes/trees etc for hanging the tent and sleeping equipment in the morning to air and dry out! We haven’t got really wet while camping yet, but there is condensation to deal with each day.  The evenings have been down to 3-4 degrees and although we haven’t been  cold there is a lot of condensation in the mornings. The Tonning campsite ticked the bushes box, but the showers weren’t brilliant and it did rather feel like it was on an industrial site! Third priority is quality of toilet paper – the worst being our first night camping when we had to provide for ourselves – which thankfully was already part of our inventory so thankfullywe were covered. needless to say, that has been our least favourite campsite!