Despite only having been here for 9 days we have still managed to make a fair number of observations on life and the culture in Croatia, which are:

1. People are really friendly with so many cars and trucks beeping (in a friendly way!) and people waving and calling our hello to us on our way.

2. The standard of accommodation has been consistently the best we have had throughout Europe.  We didn’t stay on one bad place during our time here!

3. Cafe culture is well and truly alive here – but only for drinks and ice-creams. Lunctime food is hard to find or else we just haven’t looked in the right places.  Like many of the other countries we have been in, it’s never too early for a beer…which intrigues us as to how the conversation goes to initiate these beers at 10am on a Thursday morning over a business meeting or a game of cards…both are real live scenarios that we came across! And as has been typical across Eastern Europe there is smoking inside the bars.

4. The Croats love their gardens in which a large majority of them have outside ovens.  Twee garden ornaments are a common feature as well…particularly Snow White and the Seven Dwarfs, which we have seen on more than one occasion.

5. Lots of the rural villages seem to be a long line of houses alongside a main road, one house deep.  And there is always one house that is painted a ridiculously bright colour to stand out from the rest! 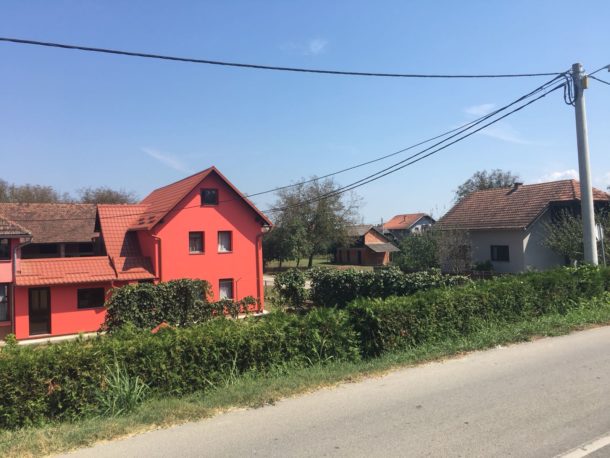 6. Rural Croatia is as we expected much of Eastern Europe to be, with  on old-style tractor parked outside nearly every house and old-school manual farming undertaken.  It doesn’t make the country feel backward in any way; it’s just such a contrast from the towns and cities.

7. The standard of spoken English is excellent – even in tiny villages with only one tiny cafe, the person working there generally speaks a decent level of English.

8. Drivers on phones – we have seen more drivers on phones here than on any other country. Even big truck drivers have a phone stuck to their ears while speeding along the roads.  Despite their driving not being that bad, it’s still a bit unsettling to see – and we haven’t seen one road sign to warn of the dangers of phones and driving.

9. There aren’t many other ‘proper’ cyclists on the roads at all.  We counted about 5 in total,which is the least we have seen on our travels to date.  Lots of people on old bikes heading to the shops, but not the road cyclists in training or other tourers like us. The standard of the roads has been okay for the most part, definitely better than Poland, but not as good as Austria! Bike lanes tend to be rather sporadic, but there doesn’t appear to be any roads we weren’t allowed on except motorways. As ever, we tried to stay of the bigger roads anyway.

10.  They douse pizza in ketchup before they eat it – yuk!

Finally, everyone we have spoken to has recommended we visit the Dalmatian Coast as we are apparently missing the most spectacular part of the country.  We made the decision for this trip not to go there, but it’s definitely something we will come back to do another time As a separate trip.  There is so much more to see here we think so it deserves at least one more trip!