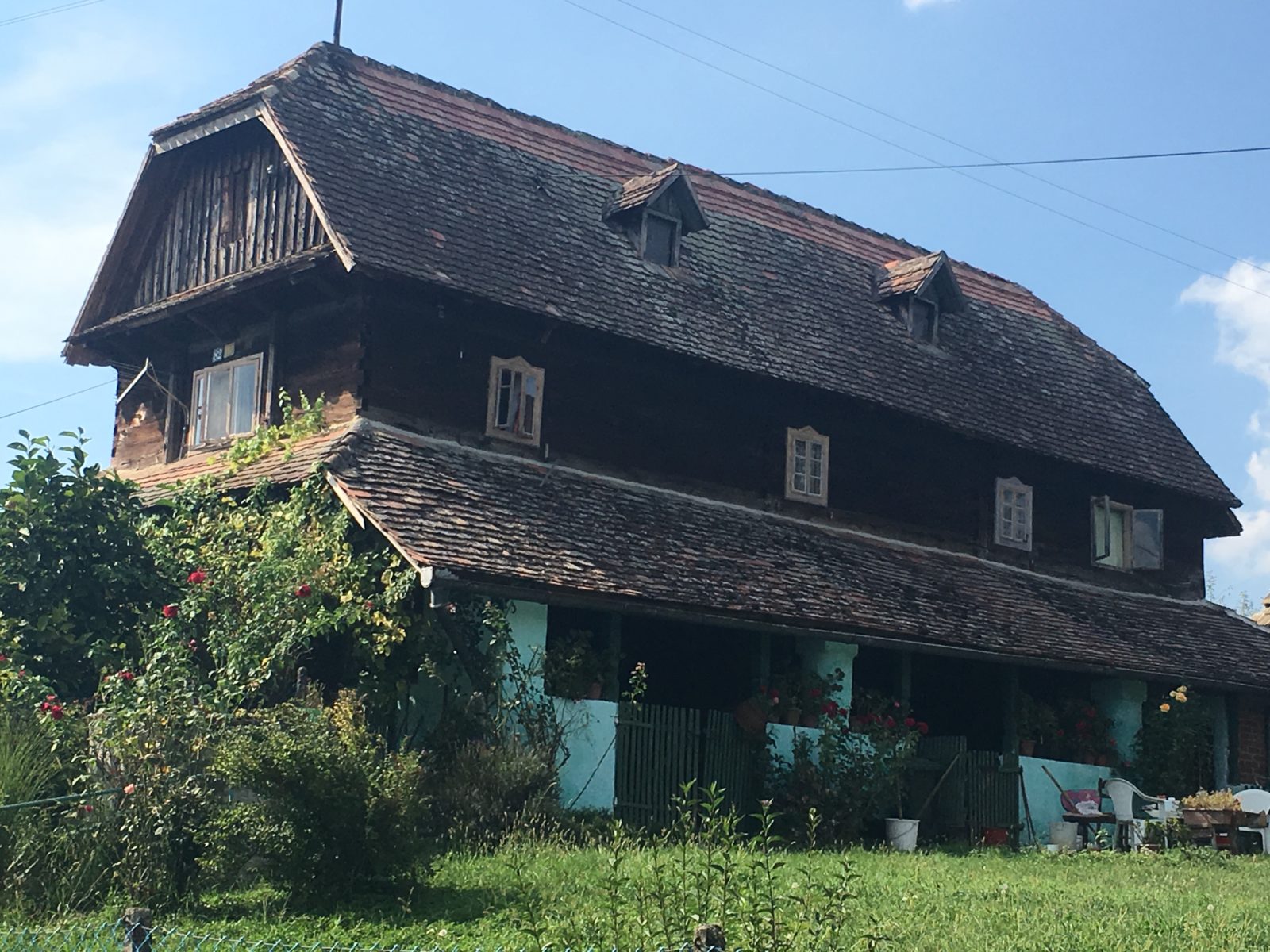 Our little apartment in Sesvete, on the outskirts of Zagreb, had served us well, but we were up and out early on our departure morning. In fact we were so early that we’d visited Lidl and escaped the suburbs by 9am! We meandered south along the east bank of the Sava river, which was all very pleasant, but unspectacular, but at least the roads were quiet. Not a huge amount to report except that we did stop for coffee in a very small village with just one cafe and 2 other customers – one bloke who sounded like he was carrying on his drinking from the night before and another who was having his first schnapps of the day – at 10:30! As per normal on our ride we nodded, waved and said hello to the people that we passed and in Croatia nearly everyone says hello or waves back, it’s brilliant!

The ride to Sisak continued along the same lines and we crossed over the river via a very nice single-track suspension bridge. Sisak itself wasn’t much to write home about, but we did manage to find a cafe to have a lunch of a pizza slice and burek (filo pastry with a feta cheese filling), which was only okay to be honest it didn’t deserve a photo! One thing we’ve learned so far is that they tend not to do lunches – the cafes look promising, but it’s mainly coffee, drinks and ice creams,  which is a bit disappointing as not only is there no daily menu like in other countries, it’s hard to find lunch full stop!

As we’d been up so early, we’d cover 63km by lunch, so really we didn’t need to go too much further, which was good because the temperature was back up into the low 30s. However, we found some decent accommodation approximately 30km east so off we tootled. We started the afternoon on a main road; it wasn’t too busy, but the traffic on it was moving pretty fast, so not the most pleasant ride. Thankfully we turned off onto a minor road which took us through a forested National Park, which was really nice. It also took us through some quaint villages where we noticed more and more old wooden houses like the one in the picture. 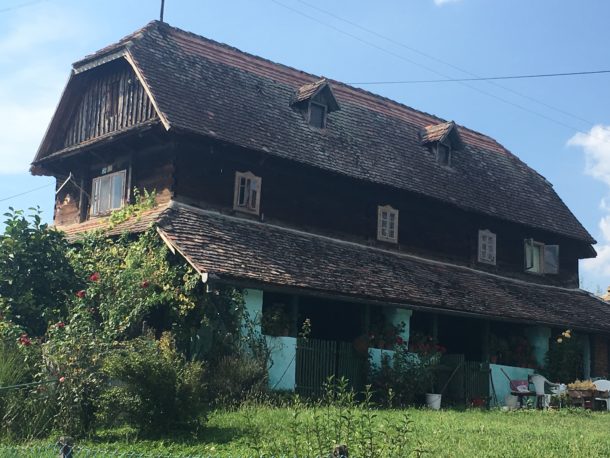 We have seen a few of these since we headed south out of Zagreb, but now there were many more, most of which were being lived in. We assume that they are old traditional houses. Since coming to Croatia we’ve been through quite a bit of the countryside and it certainly looks and feels like we expected rural Eastern Europe to be. Far more so than the other countries we have visited so far. For example, nearly all of the tractors are of a certain vintage and we’ve even seen people manually turning hay to dry in the fields. 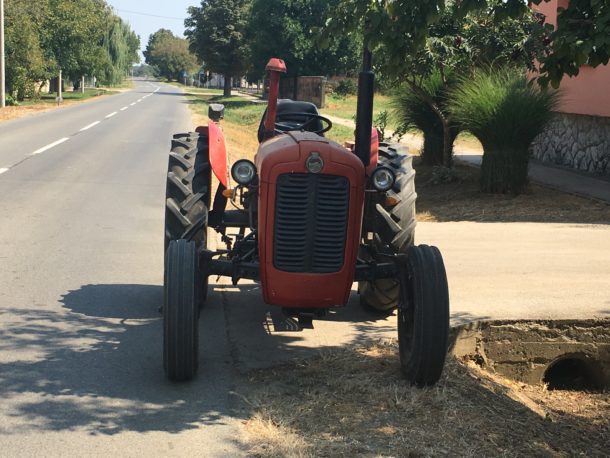 The second half of the afternoon turned out to be a really nice ride and as we’d been up and out so early we were at destination by 5pm after completing 96km. Turns out that we booked a great little apartment perched on the side of a hill among vineyards and overlooking a National Park, from where we could see the hills of Bosnia about 60km in the distance. There was a bottle of the white wine in the fridge from the vineyard and all was well in the world – we had absolutely lucked in! So, we settled in in the usual way and Martina went to pay, but never came back! I went to find her and found her sat with the owner, her son (Daniel) and his girlfriend (Lara) having a great conversation. To fit in with our walking tour of Zagreb yesterday it turns out that the owners arrived as refugees from Bosnia in 1992 with absolutely nothing but the clothes they were wearing. They have worked hard and now have more than one successful business here in Croatia, one of which was the holiday cottage business, so it was a story with a happy ending.  Ingerestingly, when Martina said we were heading east and asked if there were any places of interest on the way, their answer was ‘we don’t go east’ – quite a telling statement. We’ve come to the conclusion that the girl that delivered the walking tour of Zagreb (Kristina) had a very different view of Serbs and of the war in the 90s to these people. It didn’t affect her in many ways, whereas these folk had properly lived through the conflict. She also said that she had Serbian friends, but we doubt very much whether these people do.

We were treated to a homemade sage-based cordial (very refreshing) and pears and plums, straight off the trees.  We did have to pinch ourselves as we sat on our veranda, eating dinner and watching the sun go down – and it’s only Monday!

…..but managed to tear ourselves away from our haven to continue our journey. It’s definitely one of the places we’ll remember, as not only was it speculator, it was also a total bargain, and we love a bargain!

We decided to skirt south of the big hills in central Croatia and continue in an easterly direction. The morning was reasonably uneventful except passing the impressive chemical works coming out of Kutina. I take Martina to all the nice places!

As the day wore on in the countryside we started to notice signs of the conflict that happened here 23-25 years ago. We came across more and more shell- and bullet-damaged houses, some derelict and others patched up with folk living in them, but the signs of the war still very visible on their houses. There was even a badly-damaged church. Rather more poignant were the remembrance stones outside some of the houses, obviously where someone had died. The whole area, about 25km of small villages, was like this. It had been the centre of one of the Serbian advances when they crossed from Bosnia to the south in 1991/2. Although I’m sure it is nothing like it was just after the war, there is a surprising amount of evidence of conflict still visible. We assume that many of the displaced people never came back because it is obviously a very poor area and it had an almost eerie, ghostly feel to it. After our idyllic night up in the hills this was a very sobering experience. It felt odd to be a “tourist” here and completely inappropriate to take photos, so we didn’t.  But lots of people continued to  waved at us and tooted their car horns, so it wasn’t completely depressing.  But to add to the solemn mood, thunder clouds had been building during the afternoon to the north over the hills and every now and then we saw lightening flashes. We’d decided to stay in Nova Graiska for the night and had hoped to make it there before the rain started, but it wasn’t to be. The sky went black and boy did it rain!!! We managed to get to a roadside bar’s covered outside area just in time. The waitress came out so we thought we’d better order something and as we were waiting for our drinks someone inside beckoned us in as I think they felt sorry for us! Inside we used the internet to search for accommodation and found a hostel in town and booked in. There were a couple of blokes in the bar having a drink, one of which popped our for a few minutes. When he came back he produced a couple of chocolate and vanilla croissants and said “these are for you”- a rather tasty, if bizarre act of random kindness!

Got to our accommodation and yet again we appear to have lucked in – great spot in town in what we think is a converted warehouse, and yet another bargain! A very exotic burgers and chips for dinner, a bit of cheesy Croatian TV and another early night!

Early morning route-planning on Wednesday we noticed that there is a ‘black hole’ of accommodation on our route….after 60km there was nothing for another 50km+. We were undecided what to do, but we can always wild camp, or ask someone if we can pitch our tent on their land, so we weren’t too worried. But ideally we wanted to get further than 60km if possible. Yet again we were up and out super early. The road went through what feels like one long village that was only one house deep on either side. However houses were much smarter-looking than those we saw the previous day and  had no apparent conflict damage. 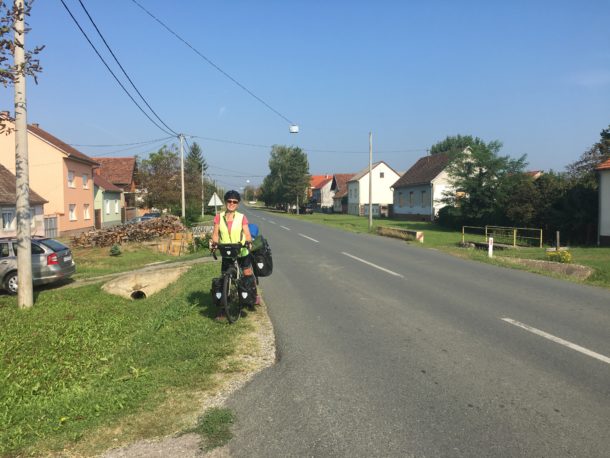 By 10:30am we’d covered 35km so stopped in Orinovac for a coffee. As soon as we’d got off our bikes, Tanya, a Canadian who was having coffee with her parents, came to us to ask all about what we were up to as she had seen the Irish flag on Martina’s bike. We had a nice chat and she introduced us to her parents.  Her mother is Croatian, who moved to Canada when she was 12 and they were all on holiday visiting family in the area – again a really nice talk with them all. Fuelled up on caffeine (well for me anyway and mint tea for Martina, as they haven’t got the gist of green tea here yet) we were off again.

By lunch (and 70km) we were at Slavonski Brod, a large town right on the border with Bosnia, just over the Sava river. Getting to the centre was a right faff as there’s was a load of roadworks, but we finally found the main square. There were a few cafes around, but our recent experiences suggested we wouldn’t find lunch…but lo and behold a cafe selling lunches! We made the most of the opportunity and had a very nice kabab each (not a doner I hasten to add!). At this point we decided to push on past the ‘black hole’ and we booked accommodation 40km (ish) away, which would take us to a 110km day in 34-35 degrees with little shade.  Tough going, though the terrain was flat for the most part. We both drank at lease 4 litres of water today, as we normally do on days like this.

Nearing our destination we had our first encounter with feral dogs (or at least very unpleasant tame dogs) near a farm. Our defence was to slow to walking pace and even stop to give them nothing to chase. They made a load of noise but got fed up with in the end and so we were able to carry on. We made it to our accommodation only to find that it’s actually a wedding venue about 50m from the edge of the very busy E70 motorway. And it was closed with no one around. We phoned the number on the booking email and a chap came out to let us into our room which was in a block around the corner; it is actually quite nice, if a bit noisy, but ear plugs will sort that out – and he also gave us complimentary beers, which was an added bonus! We did have visions at one point of being in the wedding venue on our own …..sleeping below the glitter balls!

We had dinner sat at the outside area of the wedding venue – see picture below and note Martina on the right and the juggernaut on the left! 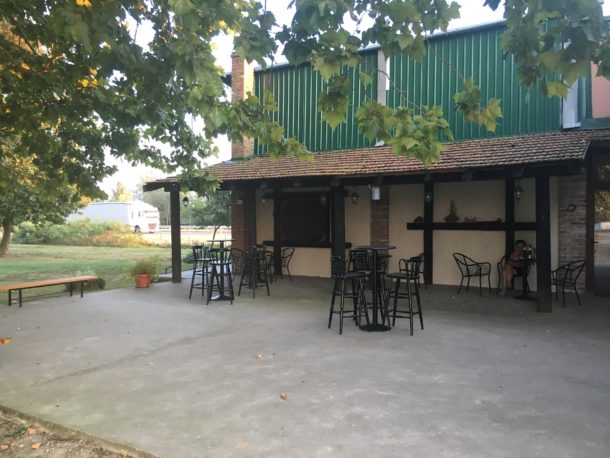