So, we made a bit of a navigational error! Well, error is a bit strong, but as we were in Osijek and needed to be in Belgrade for Monday where we had accommodation booked, that left us three days to get there. On paper and on the map that initially looked fine, however…

We left Osijek early and did our normal shopping pitstop on the outskirts of town and then back along the same road we’d come in on – even stopped at the same cafe for a coffee! The signs started to change at this point and even on the Croatian side of the border they were written in both the English alphabet and Cyrillic.

Another 15km along the road and we were back on the Danube to cross the border into Croatia. We cleared the Croatian side and then went over the bridge to the Serbian side where there was a monster queue of cars and trucks. So, we did the right thing and cycled past the lot and jumped in right at the front, had our passports checked and stamped (first of our trip as we’re outside of the EU, but no visa needed) and were off without so much as a blink from the others in the queue!

We went through a very non-descript small town in search of a cash machine with no success. This is one of the first things we try to do after crossing a border as we feel more comfortable when have cash. More success at the next place which was bigger and had a load of old blokes playing very noisy games of cards and chess on the main drag. The rest of the day took us through some pretty dull countryside – we were on the Danube cycle path (Ev6) but rarely saw the river. Some of the paths were not that good either… 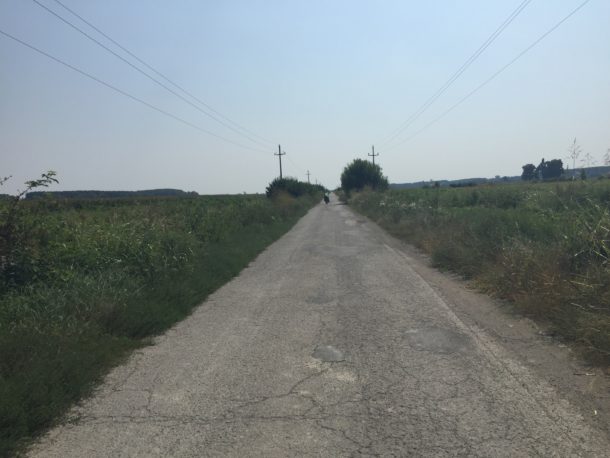 and we had lunch next to a derelict industrial facility… 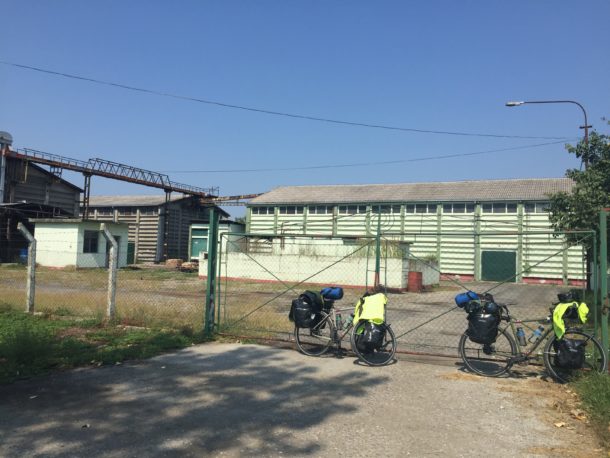 so we had a long and fairly dull afternoon until…

it was getting to the point in the day when we were getting tired and in need of accommodation or a camping spot (there were plenty of wild spots if we needed) for the night. We’d reached Backo Novo Selo and needed water, so stopped at a small shop and asked if there was any accommodation nearby.  Rather bizarrely and fortunately there was a hotel in the village so we went to investigate.

Bela Vrba is quite a funky hotel on the edge of this very small village and next to the river. We’d done 96km and it seemed like the perfect spot to stop. Martina went to enquire within and I waited outside to be approached by an old Austrian chap called Tony. We talked with difficulty about our travels until Martina came out and she could interpret. In the next ten minutes as we de-robed the bikes we found out that he and his brother Lawrence were born there and returned annually for holidays. Tony also asked us if we’d like to join him and Lawrence for dinner at a fish restaurant just along the river, so we accepted!

We met Tony and Lawrence and then walked to the restaurant, which was about a kilometre away along the shore line. They know the owner and most of the locals that were sat outside. They are both big characters, especially Lawrence, who chatted to everyone there. We found a table and ordered baked fish (there were two things on the menu and the other one was fish soup), had a great chat with these two old boys who we found out are 83 and 85 and don’t look a day over 65! And the dinner of fish and potatoes was really tasty!

We then adjourned to the bar in our hotel which overlooks an inlet of the Danube to talk more. We asked about how they came to live in Austria and it turns out that when they were 9 and 11, during WW2 they were ‘selected’ to go to a concentration camp, which we believe was on Alderney in the Channel Islands. They relocated to Austria after the war as their family didn’t believe in Communism. They have made a successful life for themselves there and come back each year to visit family in Serbia. We had a great evening with two lovely old gents who also wanted to listen to our tale, plus they wouldn’t let us pay for anything even though we tried.

We’d been told by a couple of people during the day that Belgrade was still 200km from Backa Novo Selo, much further than we’d worked out ourselves, which meant a couple of long days in the saddle to get there by Monday. This is where we through we’d made a navigational mistake by miscalculating the distance. So, we were up and had breakfast with Tony and Lawrence, and off on our way by 9am. It was quite emotional to leave them as they’d obviously had a hard and interesting lives that we’d we’d only touched on.

So, with the wind at our backs we were bound to have a great day cycling and eat up the km in the process…BUT 250m along the track the tarmac ended and we were on a very difficult, sandy track that went on for 6km! We finally made it back to tarmac and onto a reasonably busy road to Novi Sad. Got there in time for lunch and decided that this was all we wanted to do there as it isn’t the nicest place and it smelt really bad! It’s an industrial town so not surprising really.

We crossed to the southern side of the river and a diversion took us along a very bumpy, stoney track (not fun) and into a construction site! Took a while to get out and the made it to Breska where we started to look for accommodation. An Australian/Serbian who realised we looked a bit lost helped and we finally made it to Sido (100km) to a lovely pension and restaurant right on the Danube. Great value and a good restaurant serving local fish dishes (tasty but very salty!). Everything was great, even when a Serbian folk band started to play, which was entertaining for 10 minutes.  But then it went on and on and got louder and louder – sounds a bit grumpy old man to say that but they were really loud and the singer couldn’t sing!

Turns out all those people who said Belgrade was 200km away were actually wrong (we were right and it was only 70km away by this point), so we set off after breakfast confident that we would make it as originally planned. The road back up from the river bank to the bike route was a bit emotional to put it mildly. On the GPS it was marked as a paved road, but much had been washed away leaving a stony, muddy track. There was nothing for it but to get off and push! The road (track) went on for 6km before we got back to the ‘main road’.

We’ve quickly learned that Serbian roads aren’t good and the driving can be a bit irratic too.

Phew! On tarmac at last and with a following wind we started to make good progress. We met German cyclists Reinhard, his daughter, Friederike and her boyfriend Leo who were cycling from Bratislava to Istanbul. After initial introductions we decided to cycle together which we did all the way into Belgrade, about another 40km. About 15km down the road we were joined by 2 French cyclists, Christoph and Joseph, who had already met our new German friends the day before, so we travelled as a group in to the city. About 10km of this part of our journey was along a very busy road and it started to rain, so not very pleasant at all, but there was safety in numbers! We said goodbye to Christoph and Joseph on the outskirts and the others when we got into the town centre.  It had been really good to have some travelling companions, if for a short time and we wish them good luck with their own journeys. 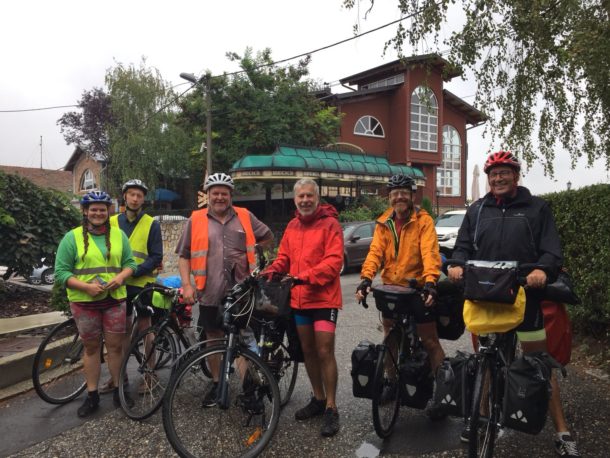 Our flat in Belgrade was very nice and we managed to get there for a snooze before dinner. We found the touristy bit which was surprisingly quiet when we got there at 7pm. Plenty of restaurants to choose from and after a short deliberation we chose one with about 4 other people in it. By the time we left about 2 hours later it was packed and people were being turned away! The food was very good and we both left stuffed. 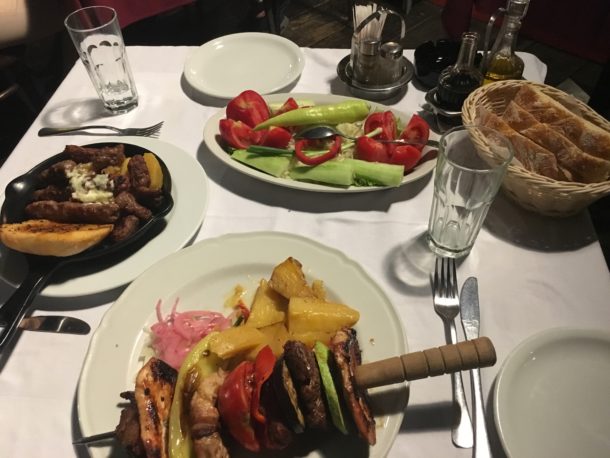 The waiter did try it on with us with regards the tip – helping himself to 30%+ out of our change, but we stood firm and he got less than he might have done! He is no match for us savvy travellers.