Neither of us slept particular well because of the noise of the motorway, which seemed to go ALL night, so we were back on the road again at 7.45 heading towards Vukovar, on the river Danube on the Serbian border.  The temperatures have gone up again so we have decided on early starts to get most of our cycling done before the baking heat sets in, so it suited us to just get out and on the road as early as we could. The route was flat open fields with nothing much to see, so it was very dull for most of the ride until we came along a river, which made it interesting enough to stop for a coffee here in a little village. 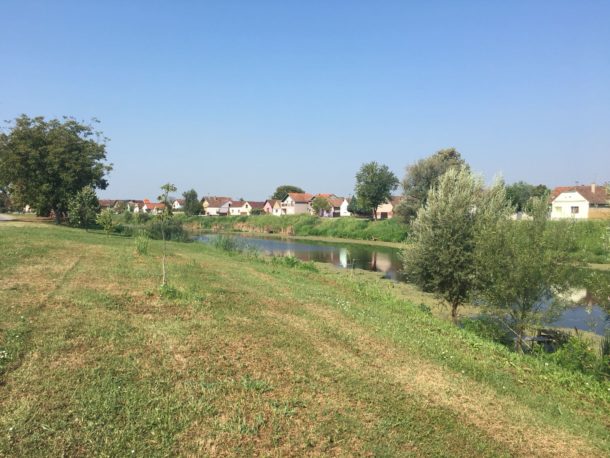 Had a short break in a fairly large town called Vinkovici, which had quite a buzz about it, and then continued the final leg towards Vukovar. Our first impression arriving into the town wasn’t great.  It was completely bombed during the 90s conflict with so much of the damage still very evident. 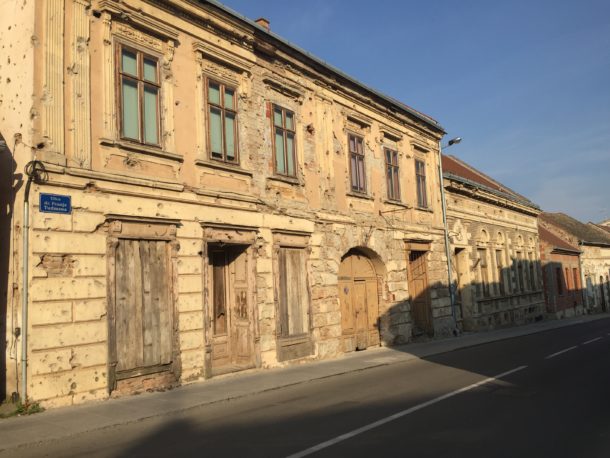 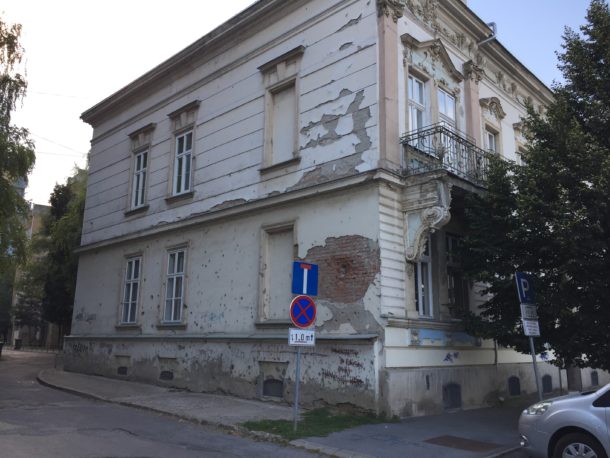 Where it has been rebuilt, some of it looks very out of place in terms of style and architecture, and there is stilll a lot of work going on. Serbia is just across the Danube where we sat and had lunch, so it was easy to see how Vukovar had been a prime target to attack, but the residents battled hard for 3 months before the fall of Vukovar in November 1991.  Very shocking to see, but I am glad we did as it is a real reminder of a terrible war that has happened in Europe during our life time.  I have to say that if I was living there now I don’t know how I would feel to look across the river and see the (not so) old enemy and not feel bitter and/or angry, but the mood in the town is very lively. There were a few boat cruises of tourists during the day, but evening seemed to be locals hanging out in bars, cafes and restaurants in the town centre and along the river.  There was a film festival that had just started when we arrived and on our way home after dinner we saw a fabulous fireworks display over the river.

Our last full day in Croatia and our destination today was Osijek, which we had heard was a nice town/city.  Another fairly boring cycling day in terms of landscspe, but the road was quite busy and about 25km from Osijek Nigel declared that we shouldn’t have bothered with this destination as we would have to travel back along the same boring road tomorrow to get across the border,  but we had our accommodation booked (we need to get back to being more flexible again!) so we ventured on.  Got into what we thought was the town centre and had our lunch in a very deserted square to discover it wasn’t actually the centre, but in fact the Baroque quarters of the old town. Nice to look at but the horse had definitely bolted from this part of town. The centre wasn’t too much busier either to be honest, but we decided to venture down to the river to see if there was potential for a decent evening meal later.  There was more going on here thankfully and we were stopped by a big friendly Croatian interested to know where we were going and what we were doing,  Turns out he lives in Hampstead in London so almost our neighbour – but he did seem over-interested in how much our bikes had cost!

One thing that we noticed in the last couple of days was the number of German and Austrian reg cars on the roads – and today there were loads of British cars.  When we have heard them speaking, they appear to be Croatians, so we guess that perhaps they went to Germany, Austria and U.K. as refugees and now return here on holiday.  Only a guess and we could be wrong – but the German cars certainly do not drive as carefully as Germans usually do, with some of them getting a bit too close for comfort!

All through our cycling into the centre, wandering around and dinner we came to the conclusion that the town looks like any other place with folk going about their business as normal. As we got used to the place it was easy, even for us, to not notice the blast marks and bullet holes on many of the buildings even in the main square. People came back to rebuild their lives and life still goes on here – and in the evening when we went back into town there was s festival in full swing and the place was packed with families out and about having a nice time. 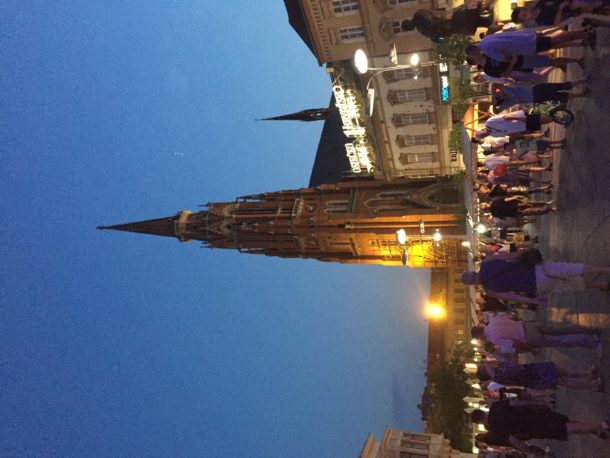 We ended our evening in a local pub down the road from our apartment, which was very local and old school; men (mostly very drunk ones) on one set of tables and the wives/girlfriends at the other!

Next stop is Serbia and to be honest we’re not sure how we feel about the Serbians after what we have seen here.  But the purpose of our trip is to see the world and educate ourselves, so we are keeping an open mind.