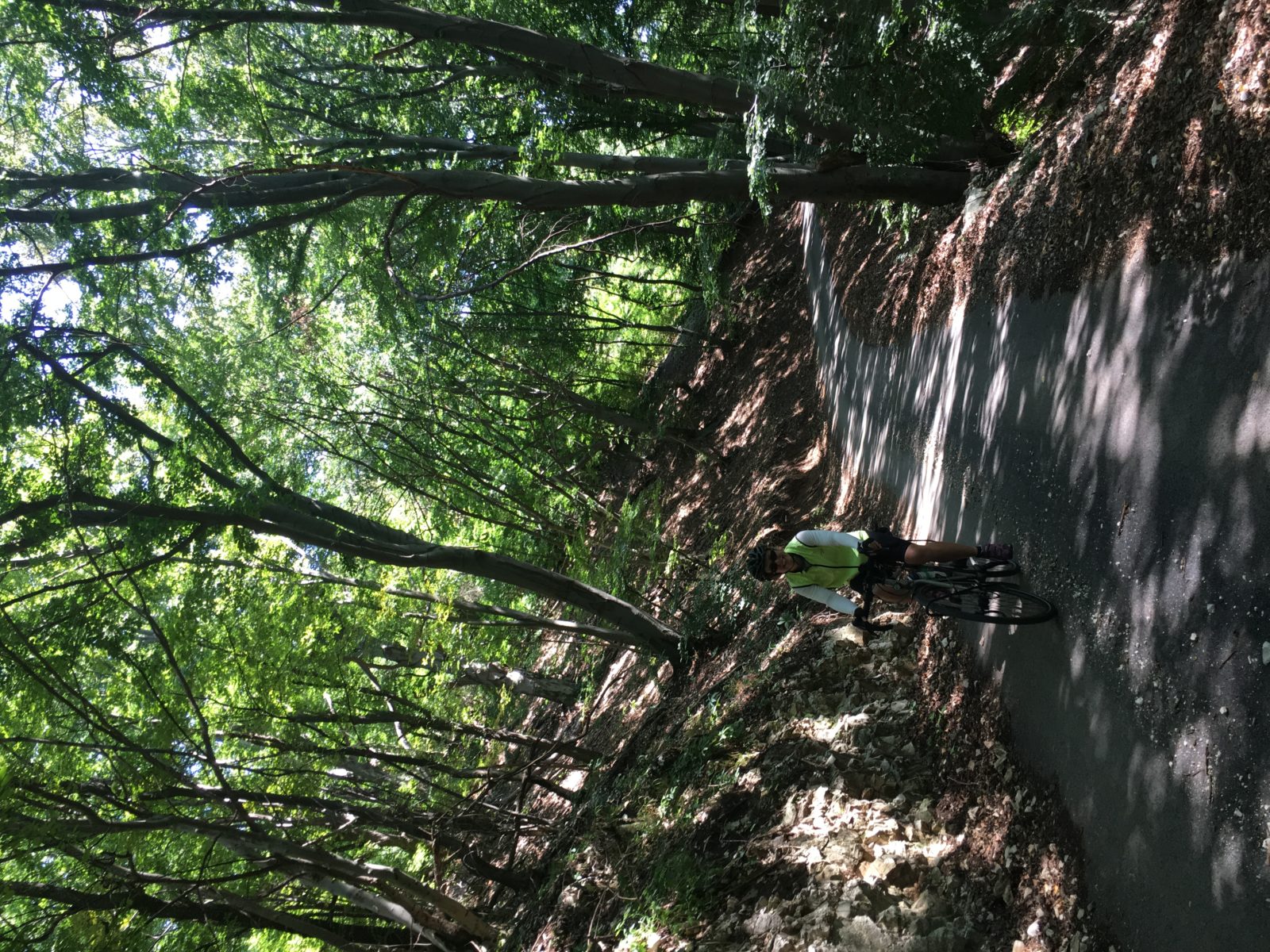 We packed up our camp in slow motion.  When we set up it seemed like a good idea to be in the shade, but the tent was pretty dewy when woke and it took a while to dry out, which we did by following the sun in different, empty, pitches.

As we left the site the old chap in the camp next to us (see previous blog for a picture of his livestock-campervan) toasted me with what I assume was either Palinka or some other local hooch, at 9:30!

We really hadn’t spent any time discussing where we were heading for next, except that we need to be in Pecs late afternoon Monday to meet up with Eva’s parents. So, we headed south through a few small national parks, some of which had a definite whiff of sulphur from the numerous small hot springs in the area. We also went between two more smaller lakes at the western end of Balaton.

Eva and her sister had mentioned that Bohonye and Nagybajom (literal translation ‘My Big Problem’!) were worth a visit, so we headed east to pass through them on our route. To be perfectly honest they are nice enough towns, but in our opinion, nothing to particularly write home about, so we only stopped for an ice lolly before continuing on our way. We booked vendeghaz accommodation online in Kaposmero for no other reason other than it would be a 95km day by the time we got there and it had been 30+ degrees all afternoon, so we were a bit knackered. Finding the vendeghaz was made difficult because there was no indication on the building (a sign would have been a good start!), but we finally made contact and moved in for the night. As the accommodation had a proper kitchen we were excited at the prospect of cooking something other than tuna pasta, but when we got to the local mini-supermarkets to buy some supplies, they had just closed…we had missed both supermarkets in the town by about 20 minutes – darn it…so tuna pasta again it was! There was a Hungarian family of four also in residence and the mother, in particular, and the two young boys took an interest in our bikes and we had a lovely conversation with the aid of our blog map. As we were going to bed there was lightning on the horizon, which turned into two monster thunderstorms overnight, so the vendeghaz had been a good idea.

As we left in the morning we saw the Hungarian family again and we all waved as we cycled away, which was very sweet. Thankfully it was only about 20 degrees, which felt positively cold (but very welcome) in comparison to what we have been used to over the past weeks.

There are, in fact hills in Hungary other than the ones we had cycled over when we arrived in the country, some of which are to the north of Pecs. To reach Pecs we had to either cross them or go around them, with the more scenic option being to cross them, so that was our decision made.   We passed through the reasonable size town of Kaposvar where we stocked up on food and then headed east and south into the hills. Nice enough cycling however, I think we have been spoilt by the scenery further north, as our comment to each other was that “it was okay”! By 2pm we stopped for lunch in Magocs and decided to aim for an area where there are a load of vendeghaz and campsites on the northwest edge of the Kelley-Mecsek Tajvedelmi korzet, a National Park, about 15km away. We found a lovely little Dutch-run campsite where we booked in for the night, as the only campers at that point. Set up camp, de-robed the bikes and headed back to the nearest village Szasvar about 3km away to stock up on some celebratory beers as it was my 49th birthday!

After our beer purchase we had wander around what appeared to be the village summer fete. There were a few stalls, one rather surprisingly only selling hats, and a chap singing, in a karaoke style, on an open air stage. There was much clapping along etc so we joined in for a while. The campsite has a small swimming pool which was beckoning, so we headed back, had a dunk and left an oil slick in it! As the only campers we set up next to a picnic table and had our dinner and beers (for the birthday boy at least!) in comfort! 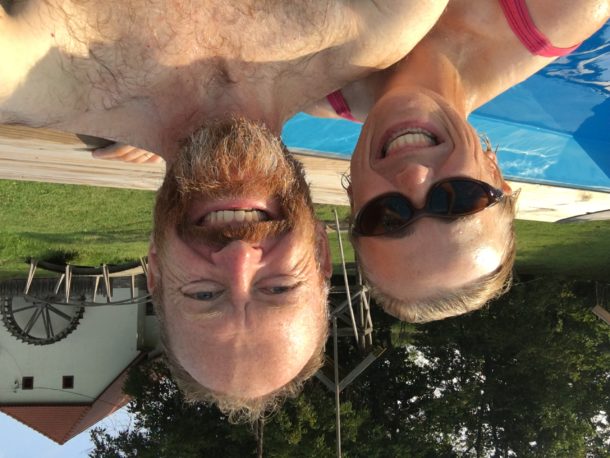 I couldn’t think of a better way to spend my birthday than cycling for the day with my best mate and then finding a great camping spot in southern Hungary!

Over breakfast the we decided to stay put for the day, – after all is was Sunday! We’d take “naked” bikes for a short ride into the National Park, find some waterfalls we’d been told about, have lunch, then return to the campsite to chill out and swim etc. All started well – we went back into the local town, Szasvar, bought food, had a coffee and then back to the campsite to pick up lunch. We then found a hill to ride up! Basically the road into the National Park goes up for about 8km. We then descended into the village of Kisujbanya where we stopped for our lunch – a quaint interesting place that used to be the centre of the glass making industry in olden times.

We didn’t find any waterfalls, so decided to head back thinking that perhaps we’d missed a sign (as we have found out things aren’t signposted well, if at all, in Hungary!).   No such luck, and after taking a picture of this butterfly that hitched a ride on Martina’s bike…. 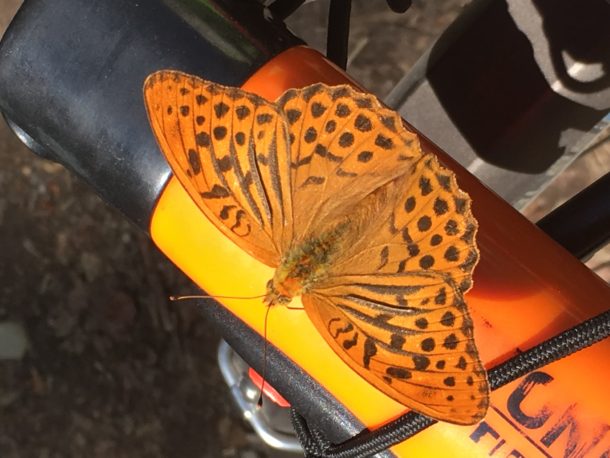 ….we were in the process of giving up and returning to base when a couple with a young child pulled up in a car, so we decided to ask about the waterfall, which as it turns out is further on from where we’d got to in Kisujbanya. We had a nice chat with the couple anyway (Zsanett and Viktor), who had perfect English as they had lived in the U.K., said our goodbyes and set off home as we decided to call it a day on the waterfalls. About 200m down the lane Zsanett and Viktor pulled up in their car and asked if we’d like to go for a drink in the campsite just around the corner, so we said yes…

They live with one year old daughter Natalie in Szasvar. We sat around for a good couple of hours chatting about just about everything and generally getting to know each other. Viktor works with ceramics and plaster-work making decorative pieces for the inside of houses, e.g. around fireplaces and columns. He about to leave Hungary for a new job in Geneva with the rest of the family following soon after, so good luck to them in their new venture.

We cycled away rather glad that we didn’t carry on to the waterfall in the end as we had a lovely afternoon chilling out with them and it was really nice of them to stop and ask us to stay around. Hungarians really are friendly people, as I’m not sure we would do the same back in London…but we are learning all the time about how being different and open to new experiences is part of our training as lifecyclers! 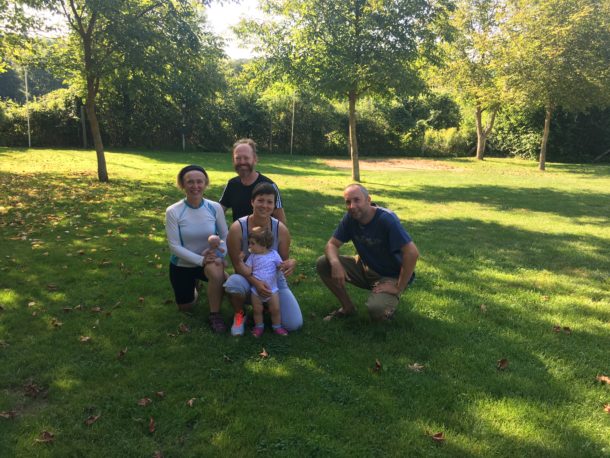 Finally got back to the campsite and after dinner we had a look around the owners’ old water mill on the site which dates to 1790 and is a big restoration project which they have just started.

We could have made the journey to Pecs on Monday morning much longer and harder by taking a roundabout route around the National Park, but we were obviously still in lazy mode and took the easier, most direct route. Well, I say easy, it turns out that there is a pass through the hills that you have to climb over to get to Pecs which we rather gurned our way up, but other than that and the rather busy main road we had to take for the last few km into town the journey was fairly easy and we arrived in Pecs in time for lunch in the main square!