The hidden gems of southern Hungary 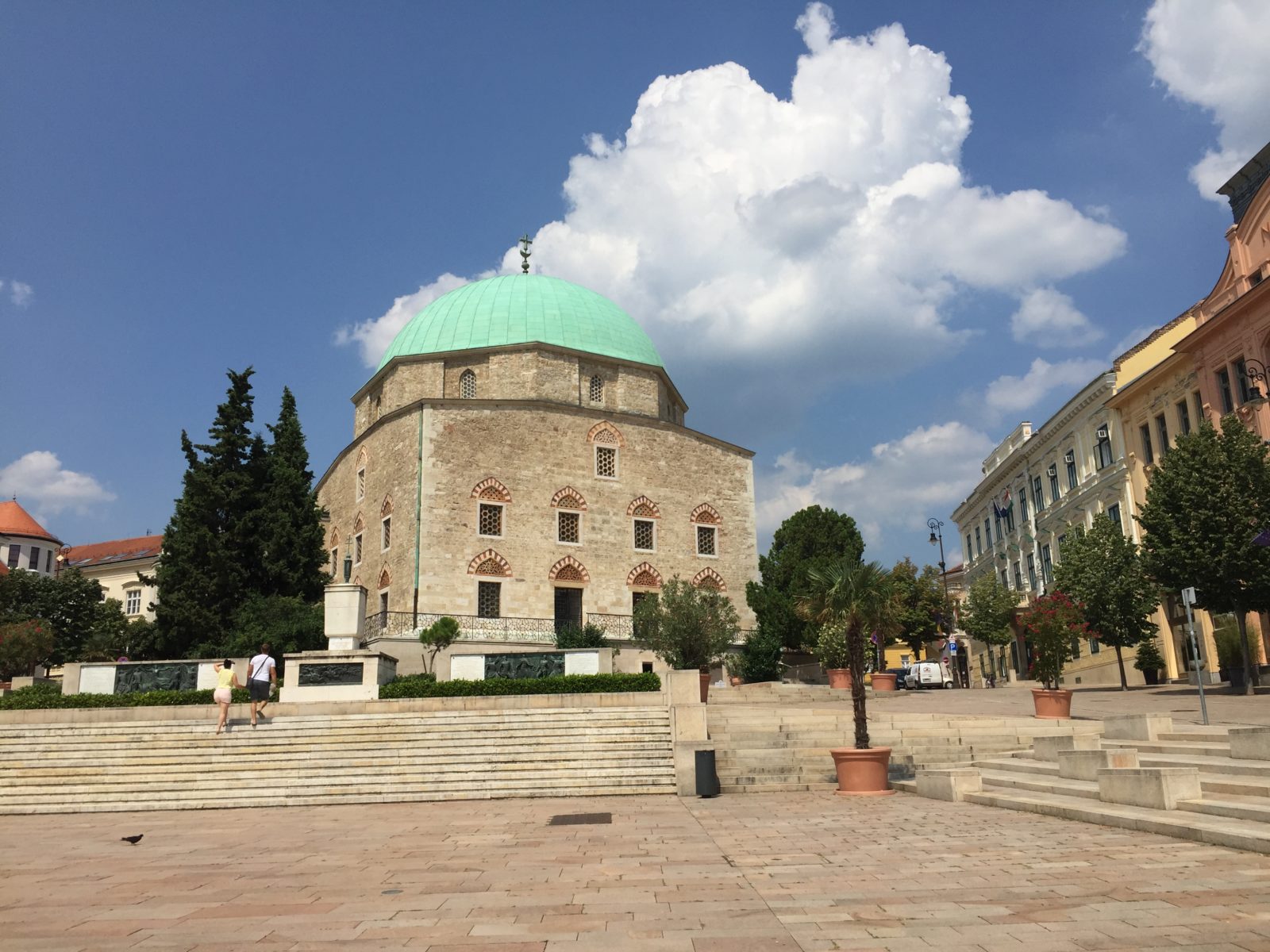 One thing that we forgot to include on the last blog entry that fits nicely below this heading, was that on the last night at the campsite in Vekeny, there was a meteor storm and we were lucky enough to see about 6 shooting stars.  At the same time we could see Venus, Mars, Saturn and Jupiter, all very bright on the sky, which is very unusual according to Nigel..

Anyway…we arrived in Pecs at lunchtime and like typical travellers we had our sandwiches in the main square, taking in the atmosphere.  It’s a fantastic little place….although it’s hardly “little” with a population of about 145,000 people. It was invaded and occupied by the Turks for 150 years, which can be seen in the architecture of the buildings and remains of the city walls and it was European city of culture in 2010, so considering we are in peak holiday season it was surprisingly quiet in terms of tourists. 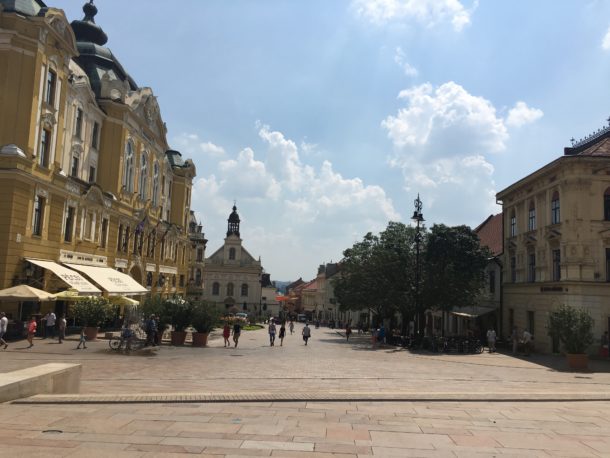 That didn’t bother us in the slightest, and after lunch, we took it in turns to visit a few of the main attractions (a downside of having bikes with us)……the Catholic Church in the main square, was a mosque in the Ottoman era, so was built pointing towards Mecca and has retained a lot its original features of the time.

The cathedral was also pretty amazing, and we were the only ones there, which was quite special.

There were also the most unusual padlock display that we have seen to date …”extreme padlocking” from all those loved-up couples in Pecs!

All that tourist-stuff took its toll as well as a fall off the bike for Nigel who hit a kerb with is back wheel and so we had to refuel with cake …before heading up a very steep hill to the Szalay household, where we were staying for 2 nights with my friend Eva’s parents – Eva and Geza.  This was the first hill in a long time that has defeated us  – 150m from the house we had to get off and push our bikes….! Thankfully Geza was waiting in the front garden for us, so we didn’t go too far – and then what a man….we hadn’t even taken our stuff to our room before he presented us with an ice cold beer each.  Bliss!! We cooled down over a few more in the garden, which had a stunning view of Pecs…

….and had a fantastic evening of home-cooked food, drinks and non-stop conversation. We had loads of questions for them about life during the Communist era, which was fascinating to hear first-hand…and it wasn’t as grey and bleak as us Western Europeans have been led to believe.  They must have been exhausted by our constant questions! Interestingly they laughed when we mentioned trying to find waterfalls the previous day in Kisujbanya as they said they didn’t exist…so that made us feel so much better that we hadn’t missed out on anything!

Tuesday they both went to work (an alien concept to us these days!) so we had a lazy get-up and a walk into town for a bike-free meander and lunch.  Pecs really is a gem of a place to visit…big enough to have things of interest, but small enough that everything is within easy walking distwnce – and even after 24 hours it feels nicely familiar.  We met Eva and Geza back at their house in the late afternoon for what was to be one of the highlights of our Hungarian visit….a trip to the Villany wine region. Having never properly visited vineyards we had no idea what to expect and didn’t really know what the plan was, but it turned into a fantastic outing by car – which in itself was a treat to sit like kids on the back seat looking out at acres and acres of vines. Our first stop was on an estate overlooking a valley with lots of vineyards.  Straight to the bar area to sample an amazing white and red wine.  Back into the car we carried on to the village of Villany, a quaint little town which is basically a street full of wine cellars that are open to the public as bars…so effectively a posh pub crawl location, with fantastic wines on offer for about £1 for a very large glass.  And the place was effectively deserted! 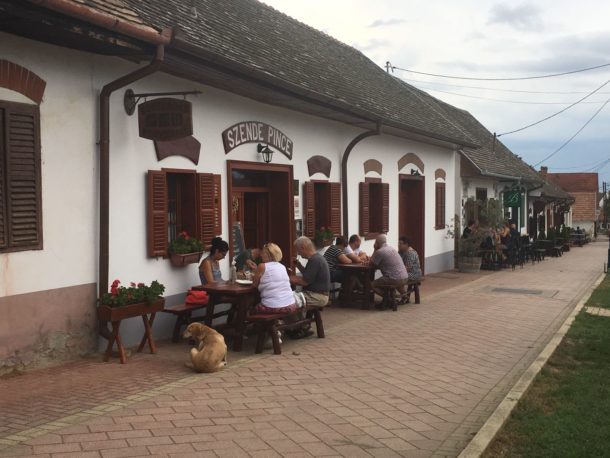 While most guidebooks and websites on Hungary recommend the Tokaj wine region as a place to sample Hungarian wine, it’s a sweet desert wine so definitely wouldn’t be to our taste.  Villany however hasn’t been mentioned in any of the guidebooks we read and it’s fantastic…even just to see all the wine cellars door to door, with so many choices of really good wines.  I enjoyed a glass of a very hip “Bock ‘n’ Roll….highly recommended! 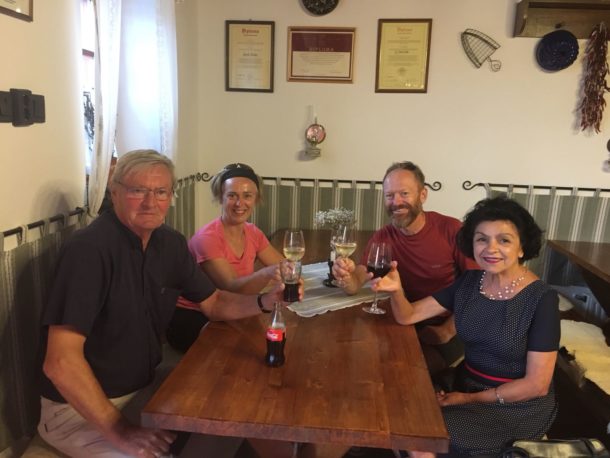 Later in the year there are festivals in the region, so I think it’s something we will come back for anther time!! Poor Geza was the designated driver so after listening to us talk non-stop after 3 wines he was glad to get into the car to get home for a glass himself!! Another fantastic meal at home and a relatively early night for all…exhausted from our exertions of the day,  but what a great afternoon – and a high on which to end our Hungarian trip – so a huge thanks to Eva for suggesting this in the first place and her parents for organising it and taking time out of their working week to make it happen.  We really loved it – and of course their amazing hospitality for our entire stay.  Despite having only met them very briefly in London at Eva’s wedding and the previous week in Balatonlelle, they invited us into their home for 2 nights, spoiled us rotten and made us feel very welcome. Another two gems on our southern Hungarian trail!

Said our goodbyes on Wednesday morning and we whizzed down the hill in a matter of seconds to head off towards the Croatian border, which was our next stop.  This is a slight deviation from our original plan, which was to head into Serbia. But Croatia is an easier border crossing from Pecs so it made sense. We are heading towards Zagreb because although all the places of interest appear to be on the Croatian coast, we reckon it will be heaving with tourists and potentially problematic to get accommodation/camping.  So why make it more difficult than it needs to be?  And as as capital city I’m sure Zagreb will have enough of interest for a few days.

Just coming out of Pecs we came across a car accident. No one badly injured but a bit of a reminder that we are vulnerable on the roads, so a bit of a sobering start to the day.  It was a pretty boring cycling day to be honest scenery-wise and nothing much to report of interest other than our midday break.  We stopped by a church in a little village that was bizarrely deserted, with the exception of lots of work tools that had been left around.  It was if the aliens had abducted everyone while they were working….very eerie!!

Barcs was our destination for the day and when we got there couldn’t find accommodation but the trusted SatNav showed that there was camping by the so we headed in that direction.  Free municipal camping facilities by the river that had a designated swimming area…what’s not to like?! And we were literally below the bridge-crossing into Croatia, so a perfect location.

Had a swim, set up camp we watched the the stars come up by the river and did some bat-watching before the mosquitoes drove us to our tent at 9pm.  A great find for our last night in Hungary!

Next stop Croatia…it has a lot to live up to after our Hungarian experience!