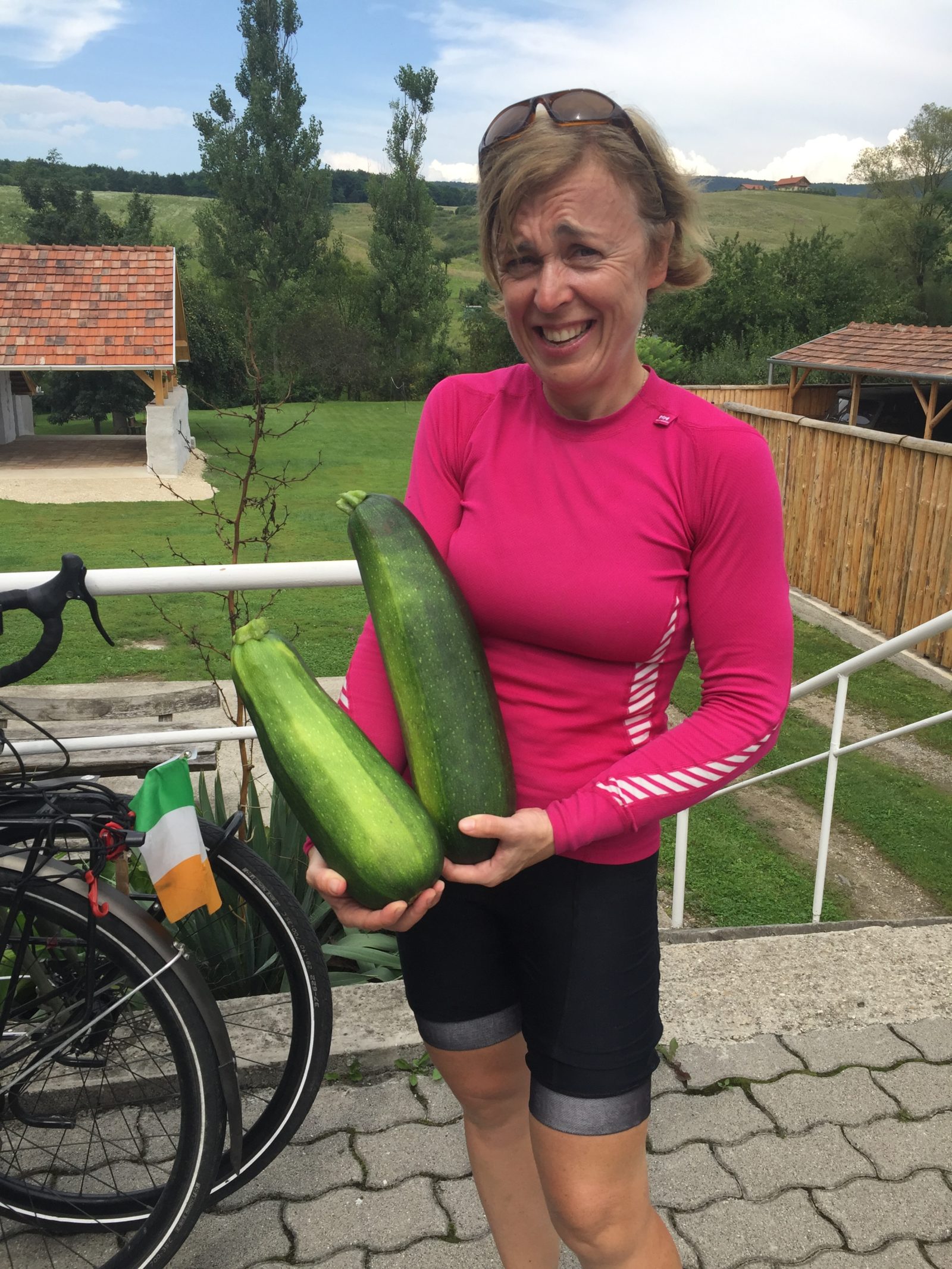 So, Thursday around 3pm we crossed the border into Hungary…well at least according to Google maps we did. The road sign on entering the country bears no resemblance to anything that looks or sounds like Hungary (Magyarorszag), but we assumed Google was correct and ventured on. 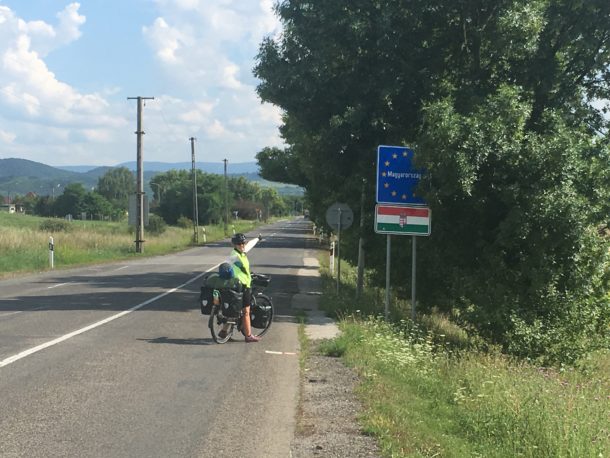 As Nigel mentioned before, when you cross into a new country it is like passing through an invisible wall….the Slovak number plates all disappear and become Hungarian and in this case the roads became really bumpy and pot-holey.  We crossed at a place called Banreve next to what looked like the old border control point and which is now a big tacky 24hr casino.  We hadn’t planned a big cycling day but to get to the nearest campsite was 20 km away.  This would take us up to 80+ km day (so much for being a short day!) but we decided it was worth it as it looked like there was a thunder storm brewing.  Cycled through the valley of a lovely National Park (Lazberci Tajvedelmi korzet) so it wasn’t too taxing on the legs, despite a few hills towards the end. It was very sweaty and steam was rising off the road where it had recently rained making it feel like we were cycling through a sauna!

Got to the campsite just as we were running out of water and phone charge….and it’s was closed…with a for sale sign on it!! And it was in the middle of nowhere with nothing other than a few houses around it, so wondered what to do next! We figured we had survived our first night in the countryside in Slovakia and Poland, so we would wild camp here.  Nigel had found what he thought was possibly accommodation on the GPS (Vendeghaz – turns out to be guest house), so we thought we would try that first as it was only 1km away.  Rocked up and a lady and her daughter came to greet us…apparently the daughter spoke German, but we couldn’t communicate so it was back to Google translate and we were in.  Basic accommodation again, but we didn’t care as a huge thunderstorm had just set in with hailstones the size of marbles bouncing off the ground. When it cleared we had this view… 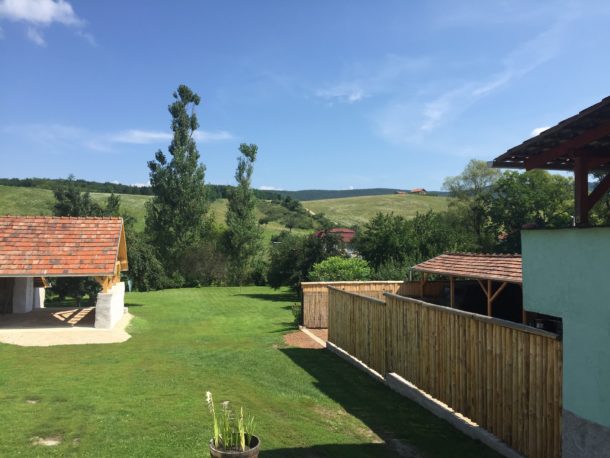 They showed us to a little bar area in a shed beside our house, and told us about honesty bar they operated  – a bargain at 40p a beer! They also said “Disco”…which we thought was odd and maybe confused it with the word “bar”, so we smiled politely and thought nothing of it until we saw a guy delivering beer later. Uh oh, was a disco going to kick off for the locals into the wee hours?? We spent the next hour or so expecting to hear people arrive,  but thankfully no one appeared and the mysterious disco never happened, so apart from a barking dog, we had a very quiet night. Although stranger things have happened a disco in a very small village backstreet did seem unlikely!

In the morning we decided we would stay put and do a day trip from here rather than packing up again.  So we set off for Lillafured, which is in the Bukk mountains on the edge of another national park about 40km away, and apparently a must-see place.   Beautiful cycling on a mostly empty road, passed a lake and up into forest…which actually worked out to be about a 30km long climb in fairly hot humid conditions. We also passed loads of plum trees, many of which had so much fruit on them the branches on the trees had broken off!

Got to Lillafured, which was basically a beautiful hotel built on the side of a mountain above a lovely garden, lake and some caves.  A lot smaller than we thought so our plans for a Hungarian lunch were scuppered…luckily we had brought sandwiches! Decided to do the cave tour of the Anna Cave, which is a rare cave in terms of its characteristics…and mostly looks like coral reef on the inside rather than the stalagmites and stalactites you normally find.

The tour was in Hungarian for 30 minutes, so even through we couldn’t understand it, it was still quite enjoyable and actually we couldn’t get in without being part of a tour anyway.

We decided to avoid the huge hill climb on the way back so took a longer, flatter route, which turns out was a bit of a mistake as it turned into a much bigger and more exhausting day than we had hoped for at over 100km and we didn’t make it back to base until 7pm, just as another thunderstorm hit.  What’s interesting is watching how people here (and in the other Eastern European countries we have visited) react to storms…or how they DON’T react as is generally the case…It started raining pretty heavily as we were re-passing the lake and instead of scrambling for cover from the rain like we would normally do, everyone just slowly packed up their gear as if it wasn’t raining at all! They are obviously so used to downpours immediately followed by sunshine, that they just take it all in their stride and don’t even bother to run for cover.

Next day, Saturday, we decided that to ensure we did have a proper rest, we would stay a third day and really not venture far.  A nice lazy get up and as we had to get some money to pay for our lodgings, the nearest town with a bank machine was 12km away, so that would be our outing for the day.  Putnok is literally a one-horse town where the horse left a long time ago, but we found the only bakery (my newly acquired skill of sniffing them out!) and indulged in some lunchtime cakes, which were delicious! It was obviously the local hotspot as even the on-duty police came in for their treats! 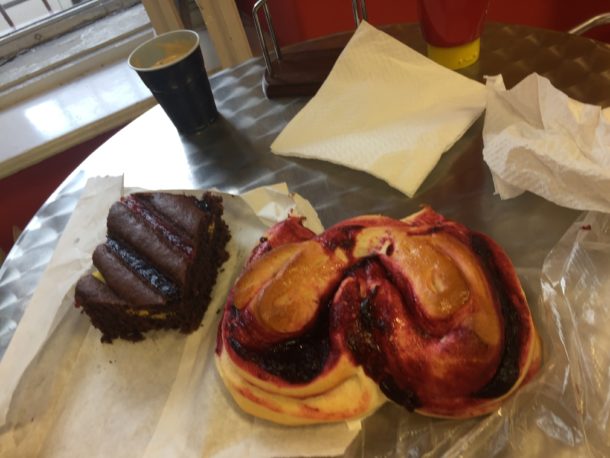 A cycle back to base to beat another thunderstorm, which we did and our landlady met us to ask for my phone so she could use Google translate….to ask us if we’d wanted some fresh plums, tomatoes, courgettes and pumpkins.  We opted for the first 3, thinking we would do something for dinner….and look what she brought!

Really glad we only asked for 2 courgettes and no pumpkins!! Managed to use some of 1 courgette and some tomatoes into a stew, which made a nice change from tuna pasta. Also made a bit extra to take with us, so we made the most of it.

Back on the road again tomorrow, Budapest-bound to meet our good friends Jo and Katie who are flying in from London to meet us.  Our first visitors!!