Them bones, them bones… 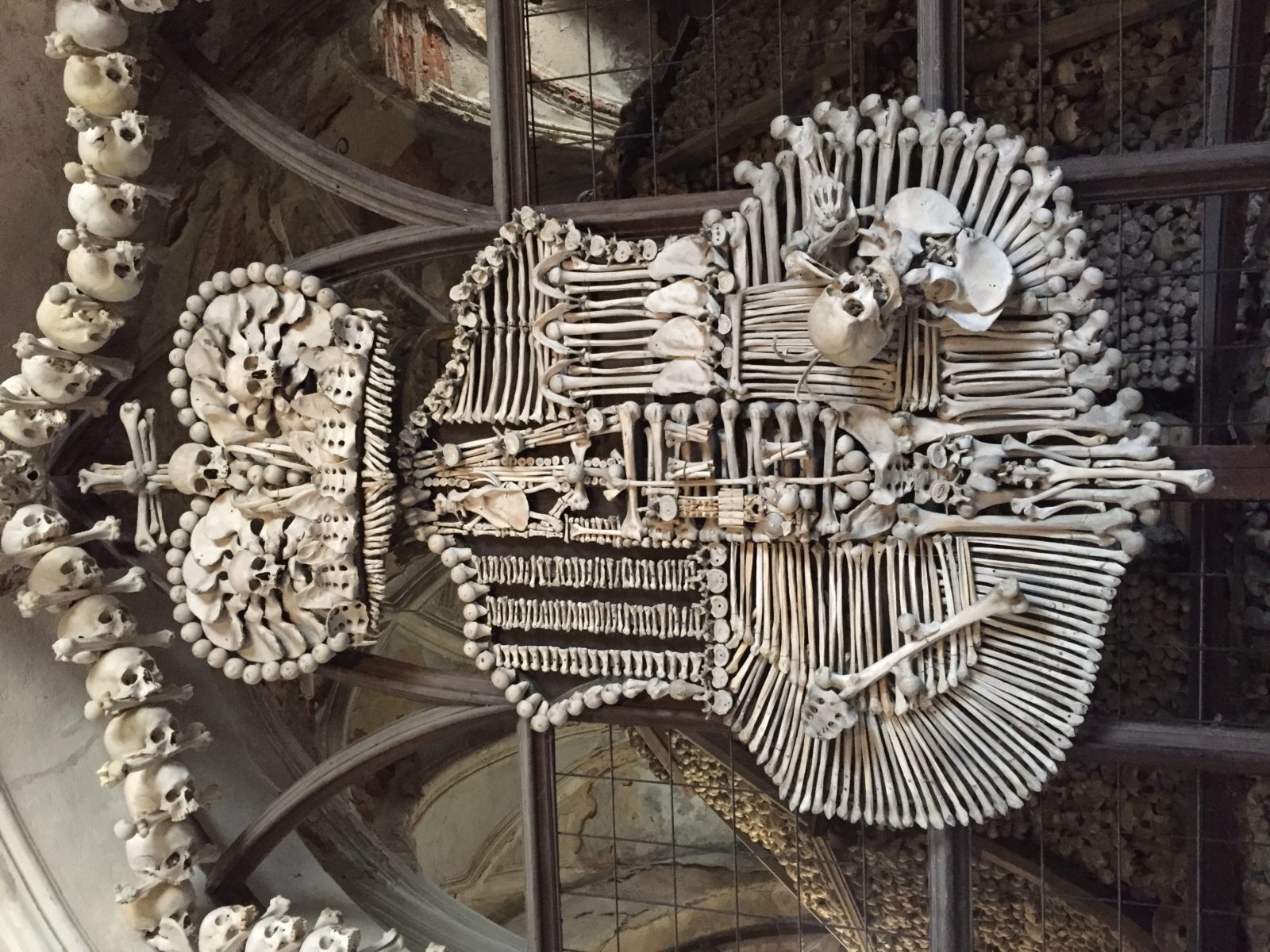 So, we both slept for a pretty long time as we didn’t set the alarm for once – in fact Martina almost got a full 12 hours sleep…Goes to show we were fairly tired!

On a serious note though, it isn’t simply a physical tiredness issue either, there’s continually a mental process of researching where we want to go, how far, for how long, how much, firstly on a here-and-now basis, i.e. the next few days, through to the next few weeks and then longer into the future. I don’t think that either of us had anticipated the mental drain that this causes. There is certainly an amount of winging it, but that cannot be done all the time as we have just found out with booking some tickets for an attraction that we wanted for next week and they’re sold out. Though we haven’t camped much recently (accommodation here is approximately the same price as camping in Western Europe) we do at least have our tent to fall back on. But having said that, sorting accommodation still takes an enormous amount of on-going organisation….even finding a camp site in the Czech Republic!

We have also found that even when we stop in places we don’t really switch off from travelling. A good example would be Kraków, where we were in the town for three whole days. One day was spent generally looking around the town, one day to Auschwits, half a day of chores and the other half on a walking tour. So, really there was no ‘down time’ and other breaks in our cycling have followed a similar theme. The last time we had a ‘real’ day off was in Larvik in Norway when we spent a day in a cabin airing our kit out!

Travelling like this is akin to going to work, but much more fun! Every day we get up generally by about 7:30am, eat breakfast, load the bikes up and are on the road by 9.30am. We are on the road for the next 8-9 hours, either in the saddle or having one of our many food stops, looking around a town, or finding accommodation. Once at base we go throug a de-robing (as we now call it – taking the bags and panniers off the bikes) process – this doesn’t change much regardless of the venue, but takes time and effort. We prepare and eat dinner, spend some time researching the next few days, weeks, etc and then it’s time for bed. Repeat…

We can be our own worst enemies too: we are somewhere new so must go out and see it. I suppose my final comment on this at the moment is that there has been a longer-term tiredness build up over the past three months….yes we’ve been on the road for three months now! In that time we’ve only had a couple of proper days off. So, it has been something that we have discussed recently with the thought that we need to change the way we go about things or we’ll just be tired all the time. Not too sure how this is going to materialise yet, but a holiday may be on the horizon…and we might get back to wild camping to ease the planning required for accommodation.

Back to being our own worse enemies and our travels…

Today was a short cycling day, hurrah! Plan for today was a 25-30km cycle south to the UNESCO heritage sites in the town of Kutná Hora. Fairly pleasant cycling on largely quiet roads.  It is Sunday and it appears that the Czechs generally follow the rest of this part of Europe and don’t do much on a Sunday. It was quite hilly and a bit humid, but we were in the centre of this lovely old town by just past midday. We had booked an AirBnB here, but the host had asked if we could check in at 4pm, so we had a few hours spare. After a wander through the centre of the old town we ensconced ourselves in a cafe in the central square to drink coffee and make use of their free WiFi to do some research (see what I mean?!).

We did get a really nice feel for and feeling from the town as we sauntered up to our accommodation at the allotted time. Turns out our room is a self-contained mini-apartment in the host’s back garden, in a sort of cube and it’s quite posh for us. 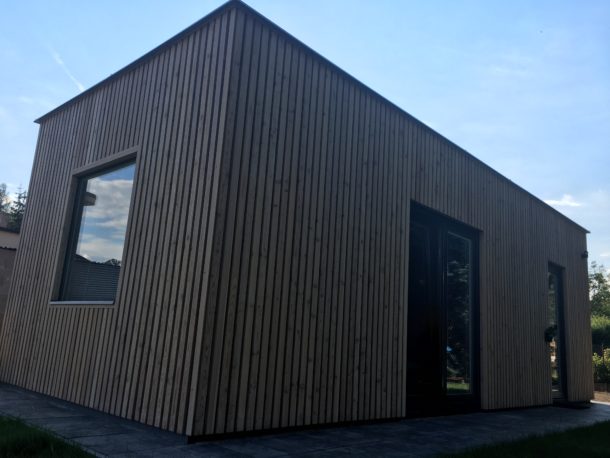 They allowed us to store our bikes in their ‘small garage’, they have another much larger one that they use! So, once in, showered and changed we were out to have dinner and a better look at the town without the bikes. We dined on Czech food (smoked sausage, pork and confit duck) on a terrace overlooking the valley that Kutná Hora sits in and St Barbara’s UNESCO heritage cathedral. The food was average, but the views were top notch. We then wandered back through the town and headed back for an earlyish night.

No alarm again, but we were still up at about 8. As part of changing the way we do things we decided that we would only do three small things today, visit two attractions and do some shopping for our onward journey. We took the bikes down to the Sedlec Ossuary which is in a church on the outskirts of town. Basically in the 13th century an abbot brought some earth back from the holy land and scattered it around the church cemetery, after which loads of people in Central Europe wanted to be buried there. When I say loads, I mean 40-70,000 people over a period of time (mid 14th-century during Black Death and numerous wars). When building a new church, these mass graves were unearthed to make way for the new construction and new graves, so the bones were all transferred to the ossuary at the new church. They stayed there until the late 1800s whena wood carver called Frantisek Rint was appointed to put the bones in order  – and he made a bit of an artistic statement with them as you can see from the picture below, which is a chandelier made up of of least one of every bone in the human body.  Basically the ossuary is ‘decorated’ with all of these bones which is a bit macabre to say the least. It is a very strange place to go and slightly sad that humans (us included) want to go and have a look at these people’s bones when all they wanted was to be buried in a place with sacred soil. 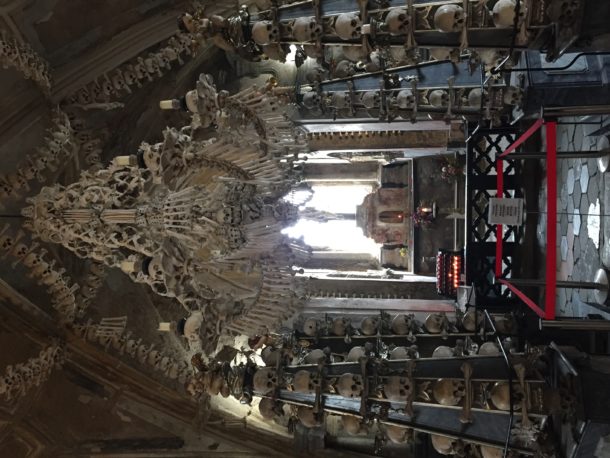 We cycled back via a supermarket (so that was two of our activities ticked off!) and then we walked into town to look at St Barbara’s Cathedral that we’d seen from our dinner table last night. Sat in the grounds for lunch with another view over the valley.  The outside of St Barbara’s is very gothic with three rather strange roofs on top, which look a bit out of place to be honest and there’s no bell tower. 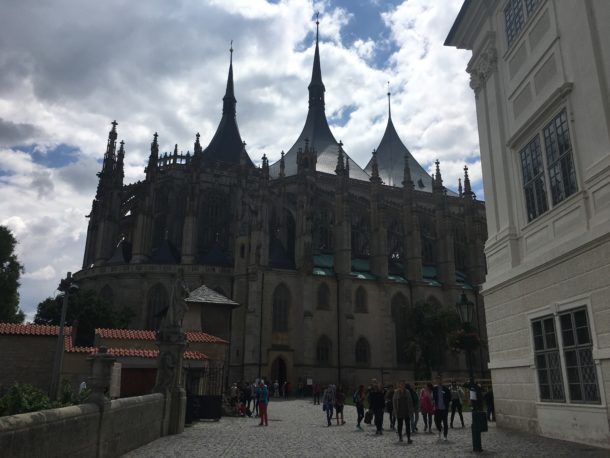 Initially we weren’t that wowed by the interior, but you can climb some stairs up to a gallery about half way up the inside which gives a great view of the cathedral from up high. Especially interesting (for me anyway!) was looking into the organ with 4000 pipes apparently. You’d at least think they’d get up there and do some dusting though as it was a bit grimy! 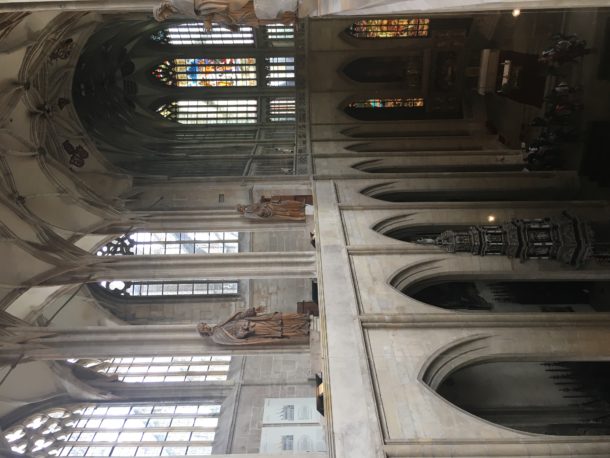