“Ahoy” to the Czech Republic 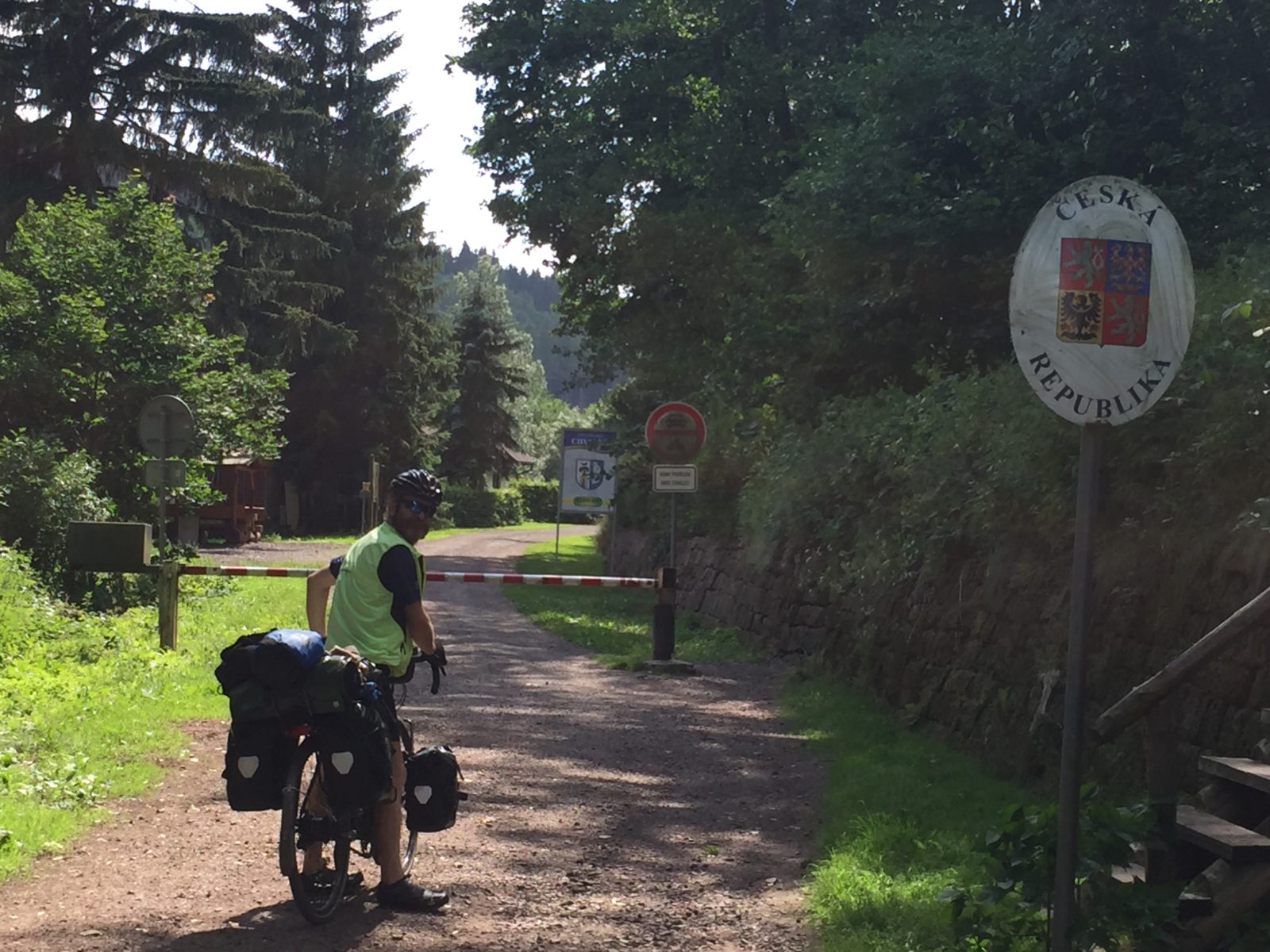 Off early with some trepidation as we planned to cross into the Czech  Republic today. Planning a route that would avoid monster hills and busy roads was quite a challenge – but as always Master Navigator Birdsall did a fantastic job and we were mostly on quiet roads, which were quite hilly, but very manageable. We were planning a pretty functional ride this morning i.e. getting across the border as our primary objective, and hadn’t planned on doing any sightseeing – or even having something worthwhile to see.  But coming into a small village of Krzeszow, we came across the most enormous and impressive church that we had to stop and investigate.  There was also some strange and very formal dancing by teenagers going on in the car park outside with lots of bystanders watching….we reckon it was school-leavers doing some kind of a display for their prom…all dressed in evening wear and smart dresses in the blistering heat at 1pm! You could tell by the looks on their faces that they wanted to be anywhere but there! Anyway, back to the church – formerly a Cistercian basilica, now owned by Benedictine monks, and seriously the most impressive thing we have seen yet – inside and out. We had lunch in the grounds beside two little nuns who were doing the same, so we didn’t feel out of place. 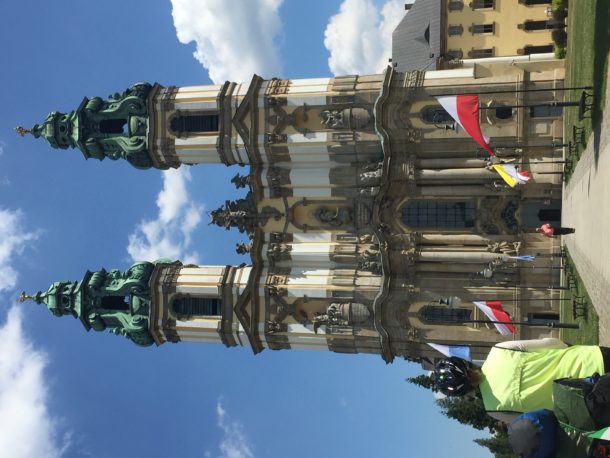 Then back on the bikes, expecting a hilly climb to the Czech border, but we were pleasantly surprised –  and it was surprisingly flat.  Saw a sign for “bike and walking tourist border crossing”, which filled us with hope that we wouldn’t have a Norway/Sweden epic when we had to find another entry point 100km away – and it was all easy peasy.  The final kilometre was on gravel track, but nothing too difficult and we just cycled straight through into the Czech Republic. 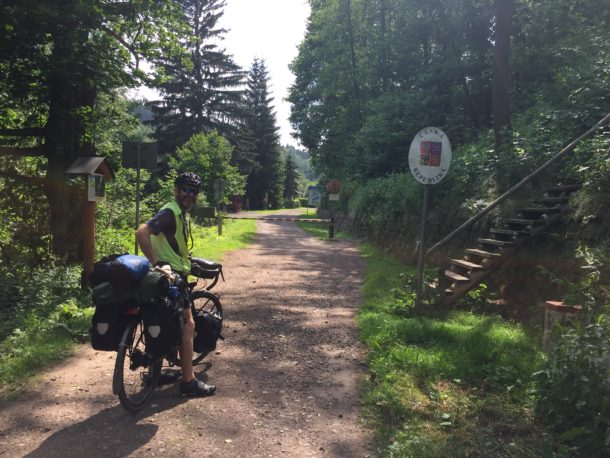 Had a sitdown to plan our next steps as we had focused so much on getting the crossing right that we had no real plans on where to go.  Decided that as it was 4pm and the weather forecast wasn’t great we should head for the nearest accommodation we could find.  And oh what a good decision that was.  Just getting into a Penzion (similar to an agri tourist house, with accommodation and cooking facilities) about 15 minutes later and a storm broke, complete with thunder and lightning – how lucky were we??! Literally home and dry -and in time for an afternoon snooze!   We asked if they did evening meals at the Penzion, which they did – but only one food choice as it wasn’t a restaurant.  We didn’t even ask what it was, but said yes – and we had a lovely 2 course meal and our accommodation for the night for the princely sum of £27.  We do know how to live it up! The landlord’s daughter spoke very good English so told us that ”Ahoj” (pronounced Ahoy) is the word for hello and goodbye – nice and easy for us to master!

When we were ready to leave in the morning we met a bunch of mountain bikers who had arrived overnight. It was the Czech Mountain Bike Association weekend away and had we arrived here a night later there would have been no room at the inn for us – so our timing had been even more perfect! Spoke to a really nice guy who has a Canadian wife so his English was excellent – and he gave us a few tips on places to go, so off we went to lots of “ahoys” to find out what delights the Czech Republic has to offer.  First stop 8km away was Trutnov, which was surprisingly pretty and had a lovely main square.  And horrah….people sitting having coffee in cafes…what a welcoming sight that was after the distinct lack of them in Poland! 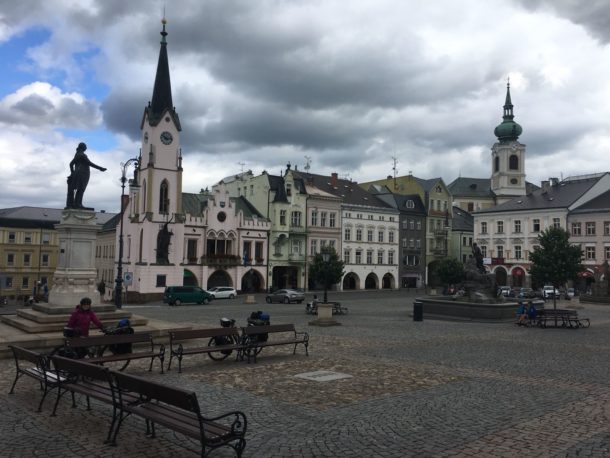 But we decided it was too early to stop, so pushed on through some nice hills – challenging at times but amazing lush steep-sided river valleys, which we haven’t experienced on our trip yet.  It was like cycling in north Wales – grey skies included! The lovely balmy temperatures that we have been used to had also disappeared and went both felt cold, so had our fleeces and waterproof jackets, which act as wind-protectors, on to keep warm!

Stopped for lunch in a medium-sized town called Ceska Skalice -excited to experience new cuisine.  Basically neither of us are fussy eaters and eat almost anything and we both happily convinced each other that what we had ordered was tasty…but in all honesty it wasn’t! Nigel had a large meatball in a sauce that tasted liked sweet tomato soup; I had a pork goulash with some strange white doughy bread, which we have since realised is traditional dumplings, served in slices. Neither of us were fans of our meals, but they filled the gap; and a boiled sweet for desert completed the non-gourmet experience.

That aside, the cafe had some interesting historical information in English, which told us that in 1866, as part of the Austro-Prussian war, there was a battle between the different sides of the German-speaking population for control of the area.  We had also seen signs of this in Trutnov, so was interesting to tie this information together.  Also made us realise how little we know about the country!

History lesson over we were back on the bike and from here on, things deteriorated for the afternoon – the narrow road got busy with drivers that were more aggressive than we we have been used to, but we did pass quite a few fields with amazing white poppies to give us some nice scenery. 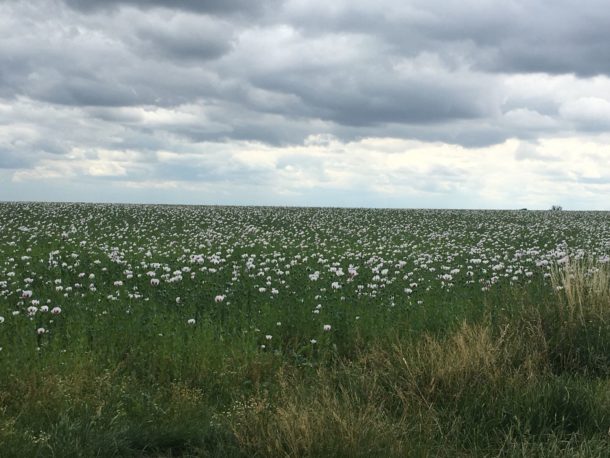 We were heading for Hradec Krolove (also part of the Austro-Prussian trail) just as we arrived the heavens opened. Thankfully the cafe culture there prevailed and we found a deserted cafe in the square to shelter from the rain and plan our next move…which ended up a 2-hour stop before the rain relented enough for us to get on our bikes again.  As bad luck would have it, an international theatrical festival had started this afternoon here, so accommodation was scarce and it took us ages to find somewhere…although it was bizarre as the town seemed completely deserted.  Anyway, we found a home and at this late stage it was a snack for dinner, showers and bed shortly afterwards…too tired to explore the city any more than what we had seen from our sheltered cafe in the square.

The landlady at our Penzion was probably the most abrupt person I have ever come across in the hospitality trade when we checked in and this lack of hospitality continued as she hovered around early on Saturday morning to make sure we weren’t going to overstay our welcome …..thankfully it wasn’t just us, as online reviews had said the same; the only time she smiled was when she said “Ahoy”and closed the door to us at 9am! After a pit stop at the local Tesco, we decided that we had seen enough of Hraden Karlove, we headed out of town along the river on the Elbe cyclepath.  (This is our second time on the Elbe as we had a ferry crossing in Germany all those weeks ago!). 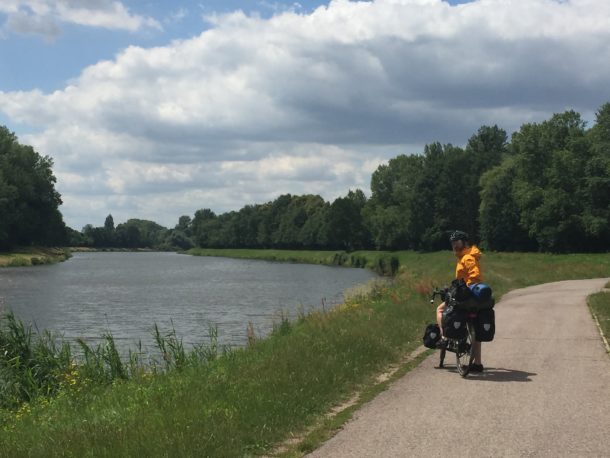 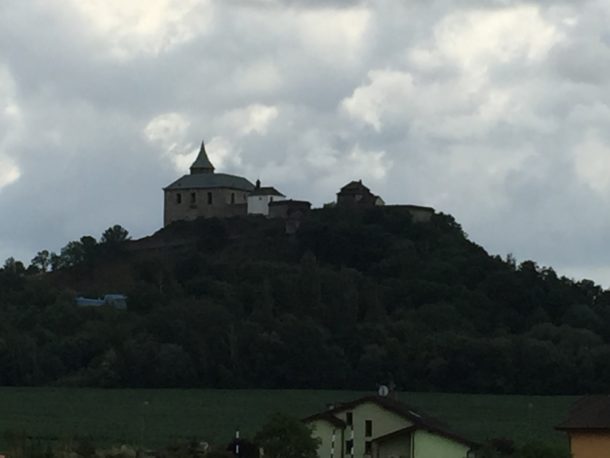 ….then headed into Pardubice where we sat and had a coffee in a very quiet main square.  Midday on Saturday, where is everyone???  One observation so far are that most of the towns seem to have factories or industry on the outskirts, but once you get to the centre, they tend to have old, pretty central squares and cobble streets.

Back on on the road we continued west on the Elbe way and not brave enough to try another cafe, we had lunch on a bench in a little village.  At this stage we were cycling into a strong headwind, which was hard work – and that was before Nigel commented that we had gotten ourselves “into a bit of a pickle” with our accommodation choice for the night.  We had opted for a country cottage on Air BnB, but it relied on a pedestrian ferry to cross part of the river.  A helpful cyclist who had stopped to help us when he saw us looking at directions said it was a tourist ferry and not sure if it would be open, so we decided to play it safe and take the long way round (by about 10km) – and that was straight into the headwind with dark grey clouds following us the whole way.  96km later, and this time it was fields of sunflowers along the way, we made it to destination- the tiny village of Klipec. As luck would have it the dark threatening rain clouds mainly passed us by and we could see the showers in the distance, so we just managed to stay dry. 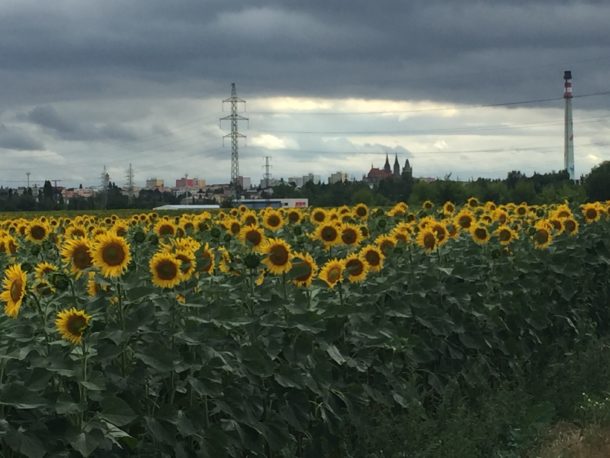 When we opened the door to the cottage it was like stepping back into the 70s – but very cute and just what we needed after our long day. We have now done 9 consecutive days cycling and feeling pretty shattered I was tucked up at 8.30…oh how my Saturday night’s have changed!!

Overall feeling so far isn’t that we are not really feeling the love in the Czech Republic, but we are keeping and open mind and looking forward to visiting Kutná Hora tomorrow where we will then have a rest day.