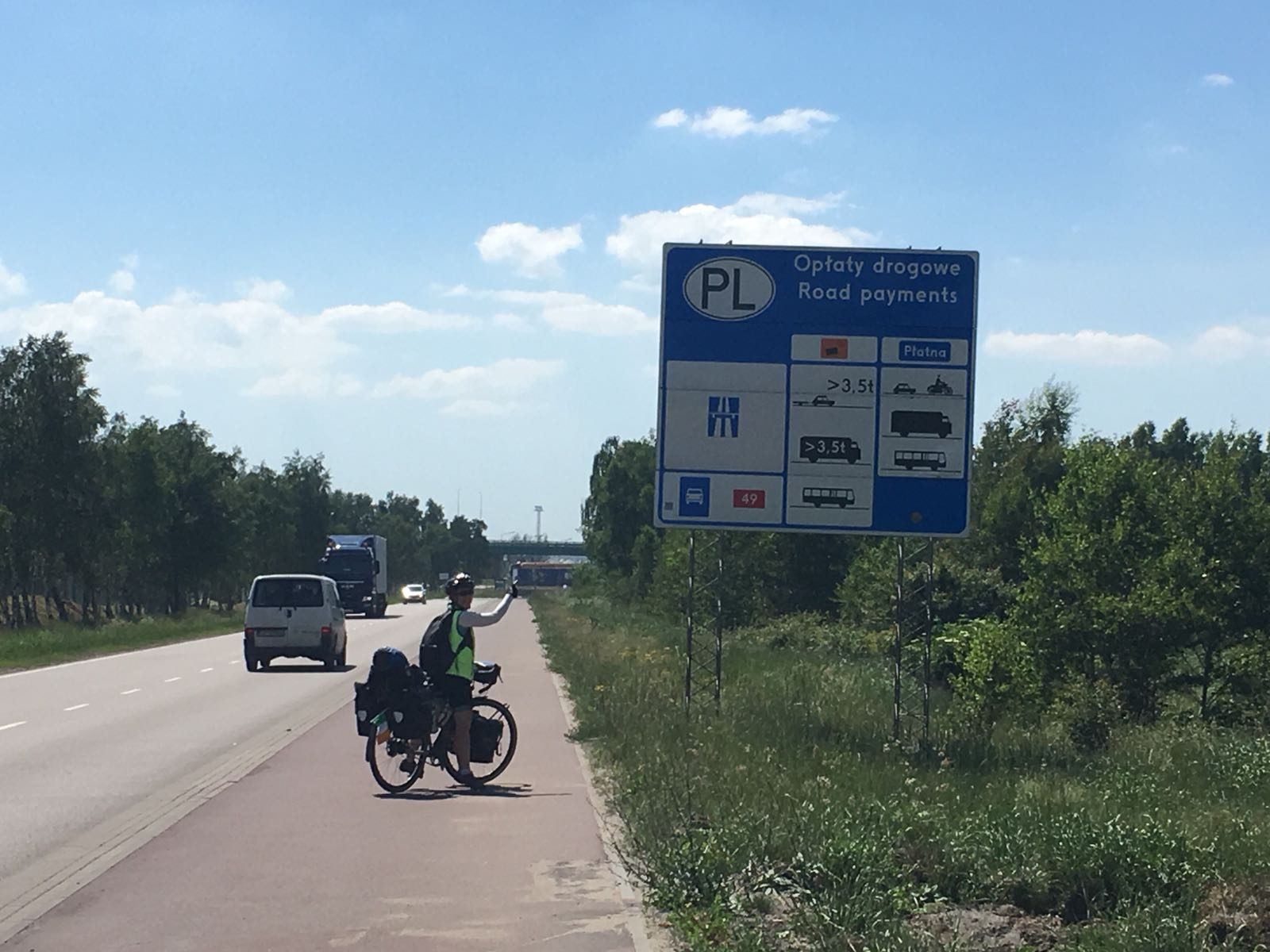 Our second Stockholm AirBnB was not as nice as the first, but to be fair it was very cheap. We had a room in a flat on the ground floor of a low rise block and the use of a shared kitchen and bathroom. It was all functional, but rather lacked the finesse of the first place. We made dinner there on the last night so that we could finish off our provisions and have as little to carry as possible to the ferry the next day. But even making dinner was a bit of a faff as the kitchen wasn’t that well equipped to the point that finding suitable pots was even difficult!

We’re a bit paranoid with regards getting to ports to catch ferries and this was no different, so we were up and out by 9:15 and on the road for a 6pm sailing ….and the port was only 45km away. The cycle actually turned out to be quite nice and getting out of the Stockholm suburbs wasn’t too difficult and the route took in back roads and cycle paths south.  We got there miles too early, but unlike Hirtshals there was a nice marina for us to sit by and have lunch in the sun (yet another beautiful day) and pass the three hours waiting for the ferry. This is when the map faff-o-rama started…

Thinking that it would be a good chance to put the Gdansk accommodation address into the GPS I fired up the SatNav to have a look only to find that there were no maps of Poland (or the rest of Eastern Europe for that matter) loaded in it. As it has been a few months since I loaded the maps I couldn’t quite remember where the maps started and stopped; there isn’t enough memory in the machine for all of them so I put ‘chunks’ of mapping onto a memory stick to be loaded as necessary, though I would need the use of a computer to do it. Now, where did I put the stick?….

I basically took my bike apart trying to find the stick – we have a folder with all of our documentation in it where I had also put the stick, but when I looked ….no stick! So, we now had a GPS with no maps. We asked in the tourist office if we could use their computer which was fine and after a massive faff with language problems (all the websites came up in Swedish or Dutch) I finally requested the maps for Eastern Europe. I still needed to download them onto a micro sd card which meant plugging into a USB port – but s the tourist office’s computer had the ports disabled I couldn’t do it there. On the tourist officer’s recommendation we went to a shop in town where a very helpful chap put the maps onto the sd card and did a backup on a new stick. Then it was off to the ferry in a slightly better position than if we had actually found the stick and at least I had found the problem before we got on the ferry.

Stocked up with weak Swedish beer for the trip as the Stavanger ferry bar had been very expensive and we assumed that this would be no different. We dodged the trucks, cars and Hell’s Angels to find our usual place at the bottom of the ferry (and pecking order) and then headed off to find our cabin. We’d only been able to book into a shared 4-berth cabin and when we looked we actually found that had been allocated different cabins even though we’d booked at the same time, how does that work?! Anyway, we dumped a bit of our stuff in our respective cabins and found some seats to chill in as the ferry set sail. The bar was open (£2 a pint…so much for bringing cheap beer with us!) and the mainly male Polish passengers and about a dozen Hell’s Angels started tucking in, what could possibly go wrong?!

We did a bit of route planning to while away the time and then decided it was bedtime at about 10:30. The party in the bar was just getting warmed up although most of the Hell’s Angels had gone by this time. We found that no one else was in Martina’s cabin so her fears of having to share with 3 polish truck drivers didn’t materialise so I moved in. At about 1am the party was in our corridor! It kept us awake for a bit, but we rather surprisingly both managed a reasonable night’s sleep. The disembarkation area was crowded with absolutely hammered Polish guys all staggering around and the air was ripe with the smell of booze ….nice! Luckily they all went to a different car deck – we can only assume that they were getting on coach and not driving!

The cycle into Gdansk proved to be much easier than anticipated – this was our first exposure to Polish roads and I had been a bit nervous of what we might find. The route missed the main road, but did go through an industrial area which Gdansk is famous for – there is a lot of industry around here. Some road works proved a bit of a pain, but we found our accommodation in an apartment block not far from the Old Town centre of Gdansk. Again, there was no border control or even a welcome to Poland sign, other than this one to indicate road payments.

We headed out after freshening up to look for a laundrette which we failed to do, but did find a monument to Solidarity, the Polish People’s Party. The monument was a piece of the wall that Lech Walesa climbed over in 1980 to break a strike blockade. There was also a piece of the Berlin Wall which came down in 1989, sparked by the events in Gdansk 9 years earlier. 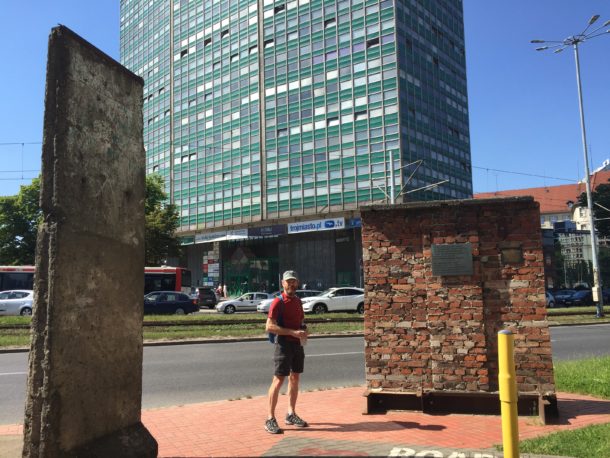 We found a great cafe in the old square to relax and people-watchover a beer. We also had some Polish dumplings (a bit like dim sum) which were very good and although we were in the touristy area was all really cheap. 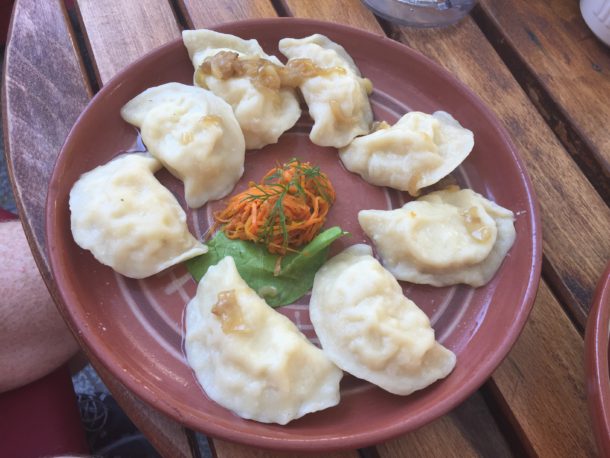 We wandered around by the canals for a while and then found a second cafe for dinner. This time it wasn’t so pleasurable, Martin’s beer was warm and had bits in it so we got it changed, the service was appalling and the food (more dumplings) was not nearly as good as the first, but all in all a great day and great introduction to Gdansk and Poland.

A late get up the next day before another wander through town to buy some provisions for setting off tomorrow. Lunch of stuffed cabbage and Polish sausages in yet another cafe in the centre of town all the while it has been sunny and hot, another wander around and then back to our apartment for an afternoon snooze….a tiring Wednesday afternoon! 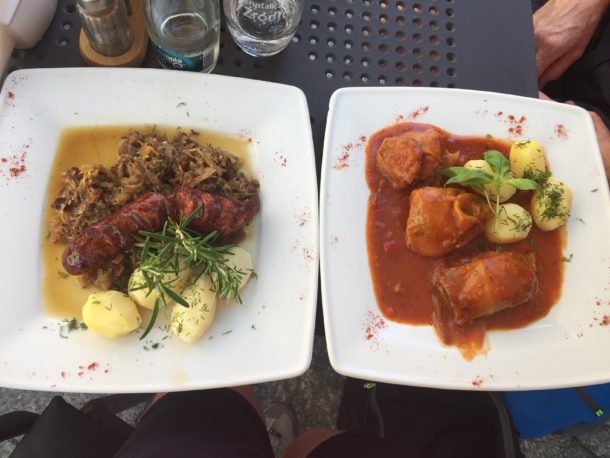