“Holly-woodge” in Poland, melting tarmac, eaten alive and a few other things 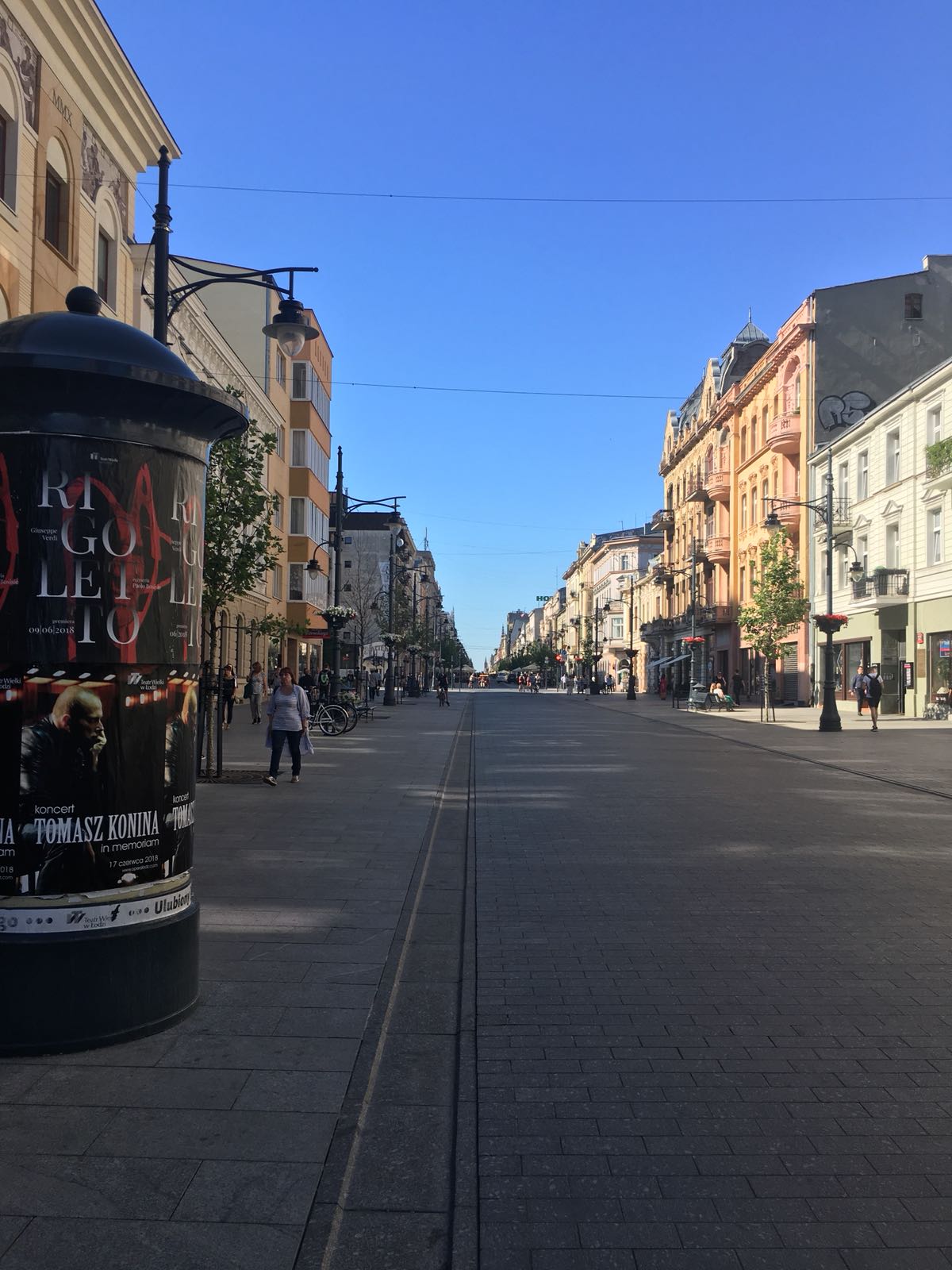 It’s been an interesting few days and a mixed bag of the good, the bad and the ugly…So after our day of rest it was up and out early from our apartment outside Plock for what we had planned to be a shortish day.  We got on our way pretty easily and crossed a huge bridge with great views of the Vistula River to get us started. 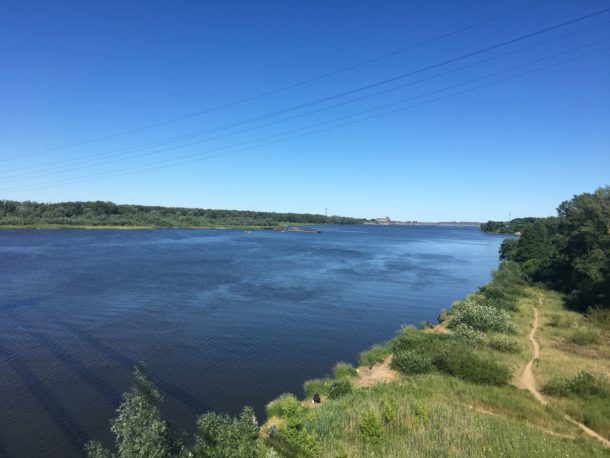 The temperature had dropped about 10 degrees since our last cycling day and it actually felt chilly..it’s amazing how quickly we have adapted to the extreme heat of the last week or so!

Our first stop mid-morning was in a small town called Gabin, which didn’t have much going on and not many people to watch, but it was one of the few towns we would pass through today so we wanted to make the most of it.  Lunch a few hours later was in the grounds of Oporow castle which was really lovely. 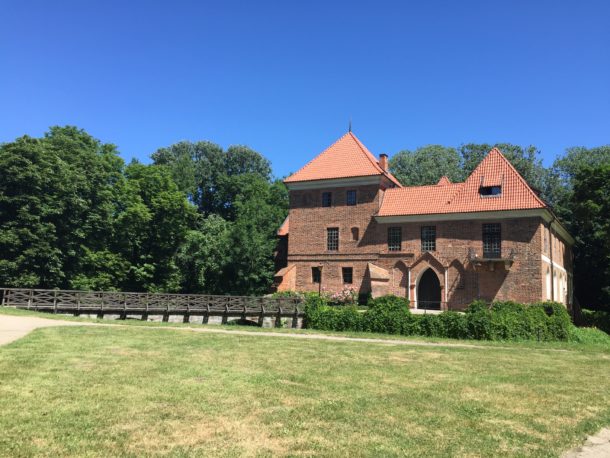 We came across 4 local cyclists, probably in their late 60s, all swigging beer before getting on their bikes again.   Very friendly but we couldn’t talk to them unfortunately as we had no Polish and they had no English, but lots of smiling going on! We managed to pass them twice on the road on our afternoon cycle as we caught up with them on different route, but honestly it wasn’t hard as they were cheerily wobbling all over the place!  The landscape today was different to what we have seen so far….small rural farms where we saw strawberry pickers and lots of farmers manually working in the fields.  Not as much woodland until we got to the last part of the day.  We had decided at lunchtime to head for a campsite that would take us relatively near to Łódź, where we had booked to stay for Thursday night so with smaller roads it ended up being a 97km day.  But as we had had yesterday off it felt very manageable.

Found our campsite, which was very nice but with an eccentric feel to it in terms of decor.  We couldn’t find anyone at reception to decided to ask 2 German guys for help, who looked comfortable tucking into a bottle of wine, so we thought they would know the score.  Turns out they just had arrived 20 minutes before us and couldn’t find someone to check-in with so decided to open their wine and enjoy the sunshine.  We like their style!

We did eventually get sorted and set up in a lovely quiet sunny corner away …and by the time I got back from having a shower we had been infiltrated by 3 Austrian camper vans, with loud shouty people and barking dogs – and they blocked out our sunlight. Grrrr. But definitely the most bizarre thing we have seen on a campsite on our journey so far has to be our Dutch neighbours here…a huge mobile satellite dish and 2 cats are part of their camping experience. Cats have a food dish and litter tray and have stakes through their leads so they don’t run away…Very odd indeed!

Next morning we were up early and it was definitely going to be a short day as we had booked accommodation in Łódź pronounced “Woodge”! (You can see how we are struggling with the language a bit!) – and it was only 45km away so we were aiming to get there for lunch and then use the afternoon to sightsee.  A pretty easy cycle there to be honest in rural countryside – so rural that there was a grocery van parked up in one spot for the locals to come to buy essentials, like they used to do in rural Ireland and England.  Not far from Łódź we hit a road made up of hexagonal concrete blocks – a main road let me point out that was also used by busses and trucks. 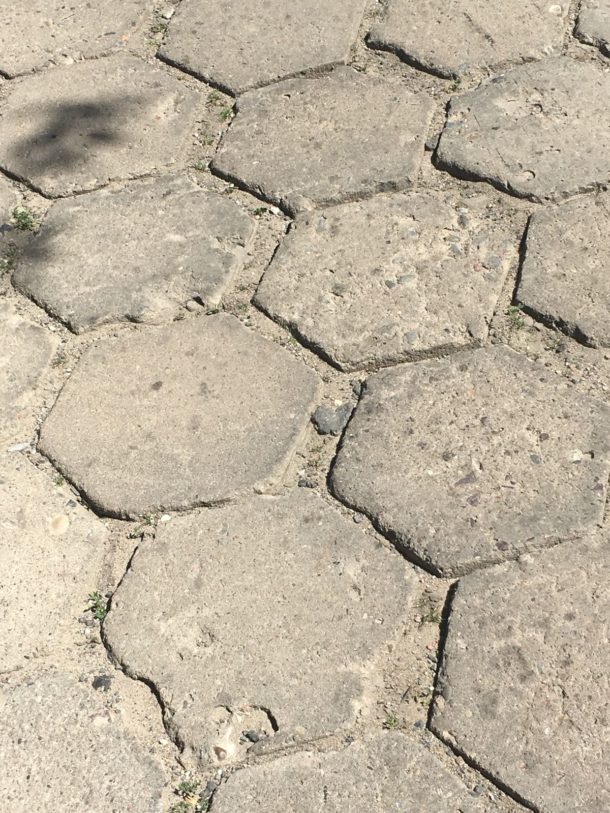 And it was a nightmare to cycle on for the 2-3km stretch – our poor bikes have been to hell and back, as well as our backsides!  Anyway, we got to our accommodation and headed out for a lunch of dumplings (making good use of the washing machine before we left!). 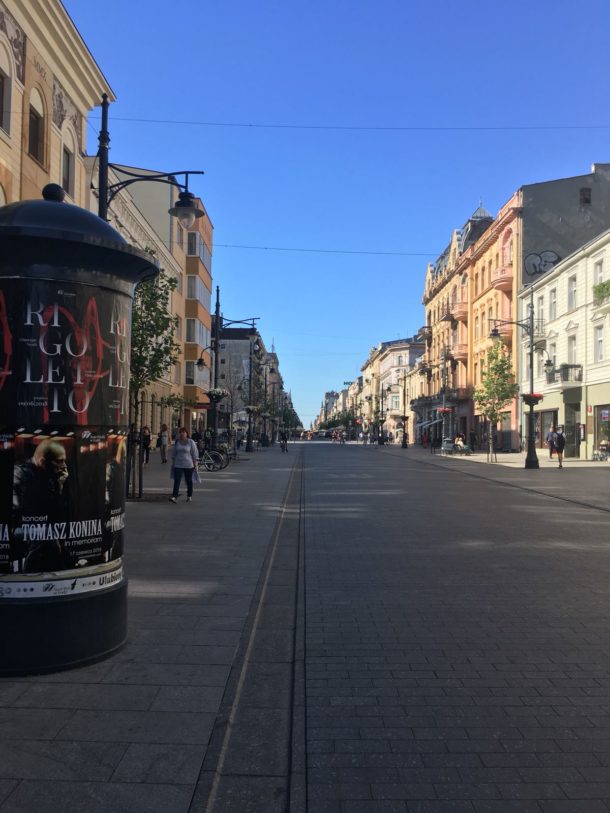 Like all good cities it has an Irish pub and it even has its own “Holly-woodge” walk of fame with gold stars lining the pavement with the names of famous Poles.  We only knew one name…the now disgraced film director Roman Polanski, so we didn’t take any pictures there! We also came across a church at the northern end of this street (St Mary’s) which is was used by the Germans to sort through the robbed possessions of Jews, during WW2, which was an interesting find that wasn’t mentioned on the tourist trail.  An afternoon snooze before a very non-Polish dinner of burgers and chips to round off the day.

Friday morning before we left base Nigel did a bit of maintenance on our camping stove outside the apartment as the chances were that we would be wild camping that evening, nothing like looking like a drug addict firing up a burner to heat up some dodgy substance in front of the neighbours …Hopefully that won’t make our AirBnB review! An easy enough exit from the city thanks to Nigel’s excellent navigating as always.  Nice easy cycling despite the fact that the temperature had gone back up to 28 degrees.  Stopped off for a snack in a lovely park outside a village called Czarnocin and lunch was sitting on a kerb in the shade of the trees in the village of Wolborz – alongside the villagers who were eating their icecreams out of the sun!

We had an idea we were likely to be wild-camping so we kept along our planned route, which was all fine and dandy until happily cycling along we both said to each other’s the same time “did you feel that?”.  The road had all-of-a-sudden become hard to cycle because our tyres were sinking into it….the heat was melting the tarmac!  Not a good place to stop to investigate so we lowered our gears and cycled on until we came to a better road with an EU Funding sign.  Disaster averted!

We then came to a level crossing that was closed.  Not a big deal and although we expected to see a train, before that happened a guard came out of his hut and let us through …and then it all got emotional…The road abruptly ended and became a sand track going into a forest, which we started to cycle on but it became quite difficult.  We felt a few mozzies and stopped to put on some heavy duty repellent.  And then it happened…every bloody mozzie in Poland descended on us like a swarm of locusts.  It was absolutely awful. When we are cycling we aren’t too aware of them, but this was horrendous.  It’s the first time on the trip since Bairbre left us in Holland that I really wanted to cry (I did when she left!), but I had to pull it together and get out of there.  We got on our bikes to cycle off but the sand was deep and Nigel took a tumble so we decided it was quicker to walk.  This meant pushing our bikes through deep soft sand for about 1.5kms, while the little feckers devoured us relentlessly. Thankfully when we made it back on to harder ground we could cycle again and make our way out of the forest to a relatively mozzie-free zone. It made us wary of wild camping spots for the next while but a nice diversion was coming across a farmer taking home the hay in his horse and cart – you don’t see that very often – and his little dog running alongside him. 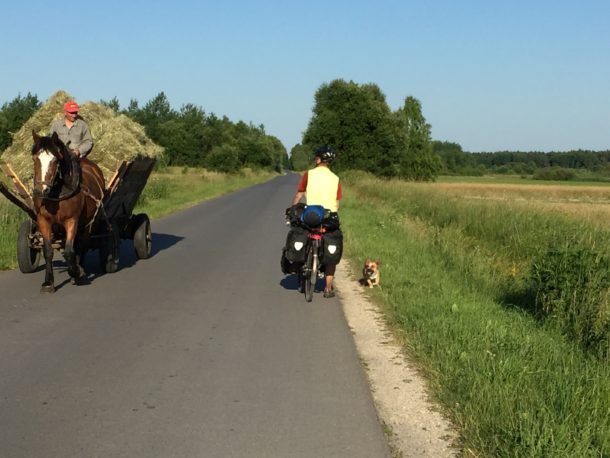 After reaching the 110km mark for the day we found a home for the night and set up camp. 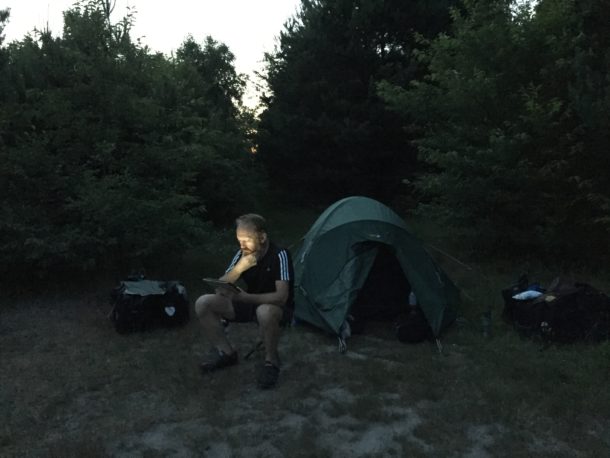 Just about to get into the tent for and a couple of dodgy looking guys on motorbikes stopped a few metres away from the hedge beside our tent. Hoping they wouldn’t see us we kept quiet, but Sod’s law they saw us and then decided to ride past us for a better look. They said something, which we obviously couldn’t understand, and then drove off, but it unnerved us slightly wondering if they would come back at any stage.  Am happy to say our fears were unfounded and we had an undisturbed night.

A few things aside from the journey details to note: