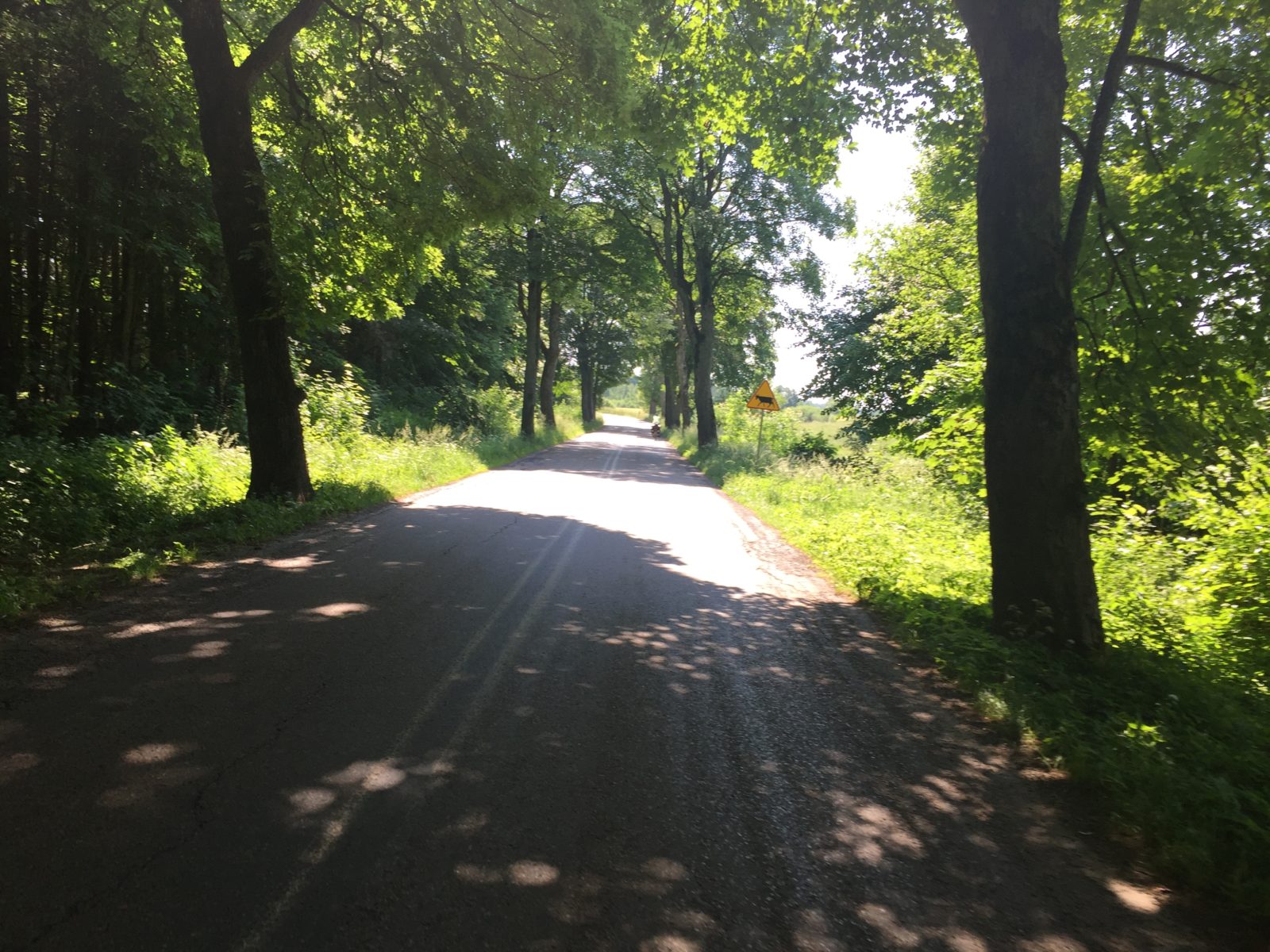 A fairly quiet dinner on our last night in Gdansk and we departed our hot apartment (no air con!) early for our first day of cycling in Poland – with really no idea of what to expect and no fixed end destination in mind for the day other than general direction Olszytn which is about 200km away.  We had imagined lots of erratic and impatient drivers, but were pleasantly surprised to find the roads quiet with very little traffic.   The SatNav took us through an industrial park so we had to re-route quite early on, but the roads were nearly empty…a bit too good to be true … and it was only later that we discovered it was a national holiday in Poland – Corpus Christi – with lots of Catholic processions in the many towns and villages that we passed through. This meant traffic diversions and also that all the shops were closed, but we were well enough stocked up so didn’t have to worry on that score.  We even joined one of the processions pushing our bikes!

Our route initially took us along the Baltic coast, but it bit too far inland to see the sea – but it was a lovely forest route and when we ventured into the seaside villages they were heaving with local tourists, which made it feel very summery. Took our 10th ferry of this trip across the Vistula river – an old school ferry that was pulled across by a tug boat alongside it during which we met a friendly German cyclist Ulf on the crossing who was on a 10-day solo trip along the Baltic coast from Germany to the Russian border.  We had a snack on the other side and then carried along our route in remote countryside and farmland listening to and seeing frogs, woodpeckers and nesting storks! 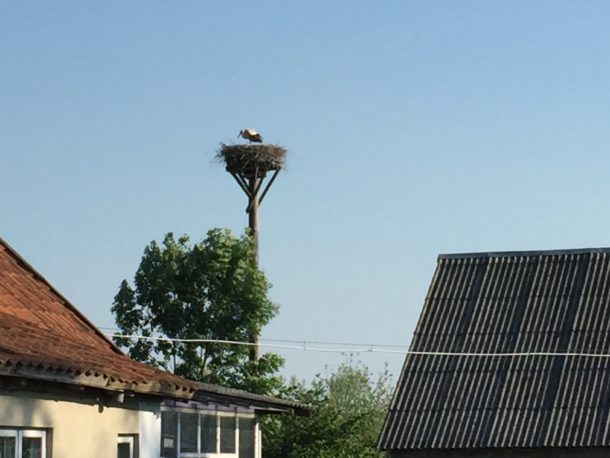 The road surfaces aren’t great, especially along the edges, so we have to cycle pretty central in our lane – but to be fair the drivers are considerate and we had no real issues. However we did come across a 10-mile traffic jam in the other direction from us, which did cause a backlog of cars and mobile homes as they couldn’t overtake us.  Decided to stop for lunch number 2 in the centre of a town called Elblag.  Nothing significant about the town except that all the local children appeared to be using the fountain to keep themselves cool.  Temperature is around the 29 degree mark, so it makes for hot sweaty cycling….so we were happy to sit in the shade and just watch them.  We had covered 75 km at this stage so decided to head towards a campsite about 40km along our route, but if we saw a wild camping spot on the way we would go for that. And that’s what we did. At the 100km mark we came across a flat field behind a big hedge, which we decided was wild enough for us, so we set up camp and bedded down early for the night away from the flies. 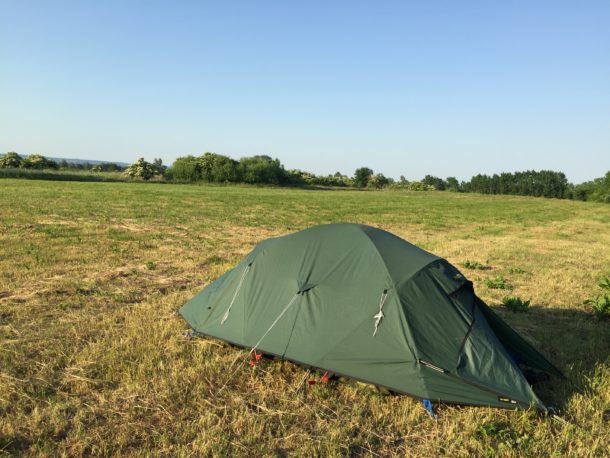 No one came to arrest us in the middle of the night, although Nigel is convinced he heard a deer pottering around the tent, so we headed off really early to the nearest town to get breakfast. Our breakfast of coffee, tea and pastries outside a bakery in Paslek was really pleasant and we sat in the sun watching the locals go to school and work….eating ice cream! I know it’s hot but seriously at 830am it’s an early start on the ice cream…

A couple of things to point out at this stage:

• Summer time heat seems to have kicked in already at by 930am yesterday and today we were baking!

•And rather than the terrain slowing our cycling down it is the road surface….it’s absolutely terrible in some places that we really have to be careful not to hit a pothole at the wrong angle and come off the bikes, so it meant having to concentrate on the road a lot instead of the scenery.

But that aside it was a pleasant ride to Morag through forest and a few hills, where we stopped for lunch. And our lunch was priceless….literally…The only place we could see that wasn’t a bakery seemed to do just burgers, hotdogs, pizza etc.  Not our favourite but we wanted to change our routine from having filled rolls, so we decided to just go for it.  When I went to order from the self service counter I discovered that they did soup so I pointed to 2 options on a blackboard and decided to hope for the best.  Nigel had a beer with his and the whole bill came to around £6, which we thought bargain! Two delicious soups arrived with chunky bits in both such as potatoes and noodles and we thought this was marvellous….but because we were hungry we decided it needed bread.  It tasted better than it looks in the pictures) 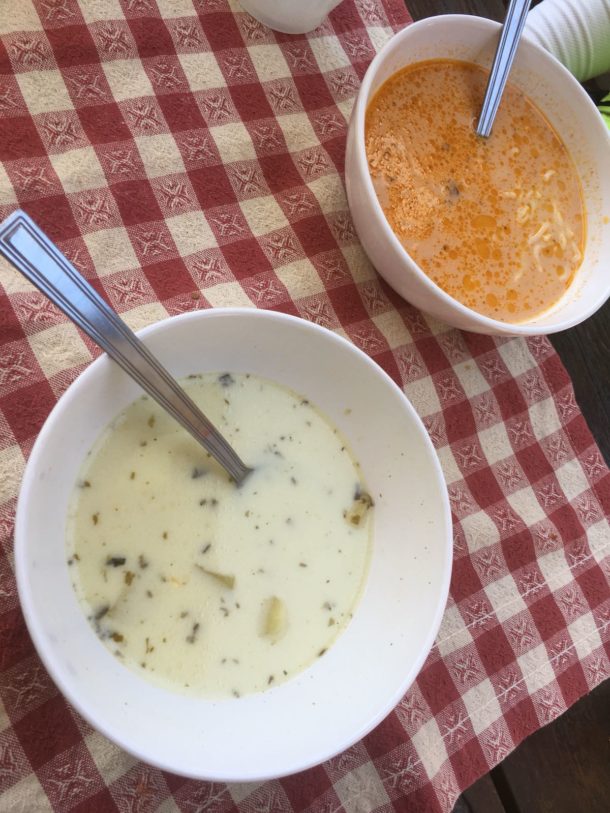 I went to get some bread,  which 10p for a huge chunk of it. As we were tucking into that, the lady who had served me arrived with 2 plates of food…the main courses of schnitzel and salad and dumplings and salad.  Honestly when we stopped laughing we managed to scoff the lot – and wondered 2 things…”is there desert as well” and “I wonder if they do cheap accommodation as well?”  Sadly no to both questions so with full stomachs we headed off for our afternoon stint. The road out of Morag was a bit busier than we would have liked, but thankfully along tree lined roads so we were protected from the sun – and as yesterday the drivers were considerate to us, although we do appear to have picked the hilliest part of Poland to cycle in.

Reached Olsztyn around 4.30, which is the start of the Polish Lake District.   Just as we booked into a hotel campsite we saw a huge grey cloud heading our way, so we decided to upgrade to a room.  After a night of wild camping and a cheap lunch, am sure the budget can stretch to it!  Over a few beers in the bar by the lake we listened to a local entertainer wowing a private party with his accordion playing skills and singing.  Nothing like a bit of local music to sway along to on a Friday night…