Norway on the Horizon 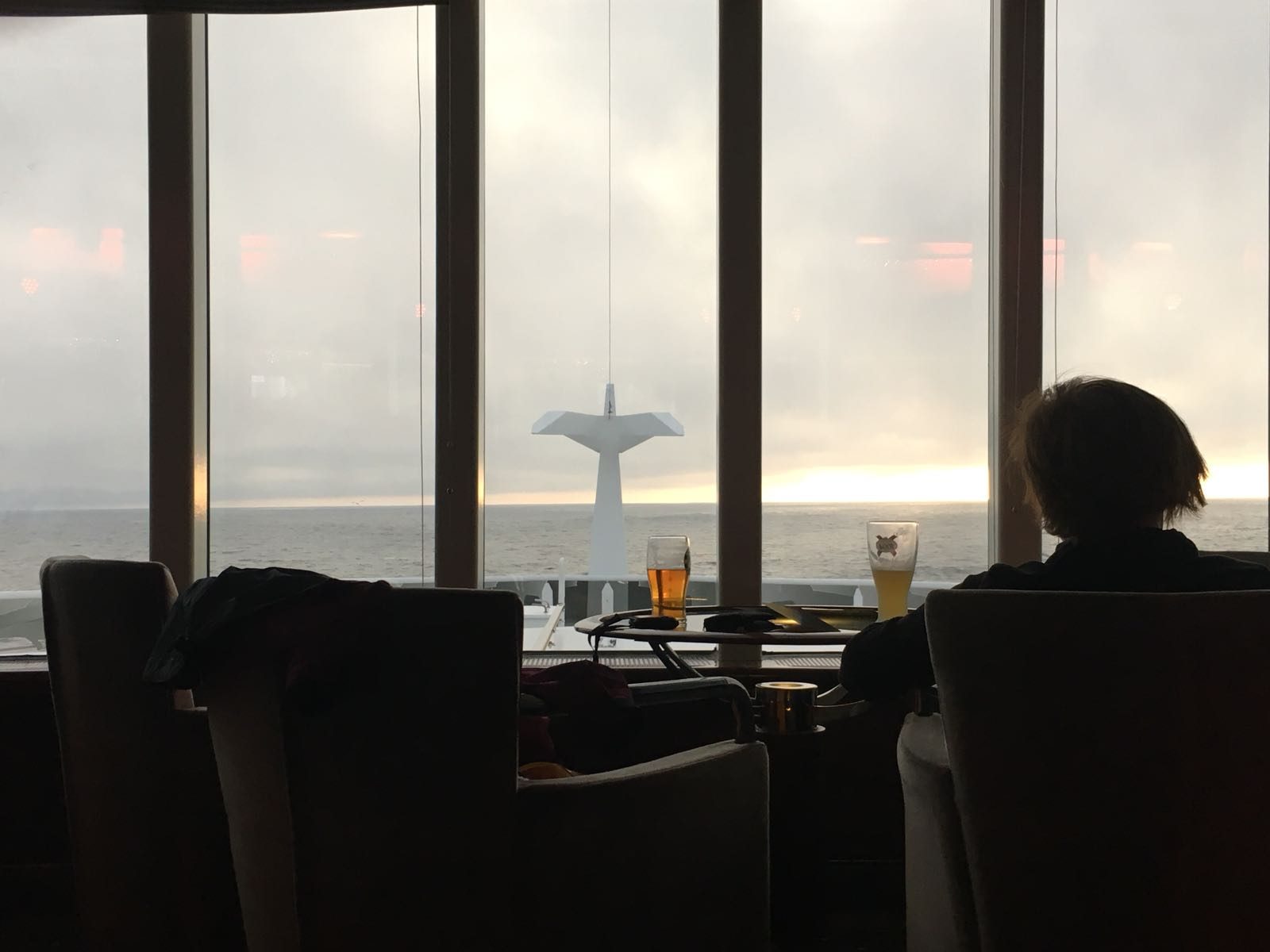 The road (or bike path as it happens) to the port town of Hirtshals is long and very straight – have a look on a map and you’ll see that nit basically comes out of Aalborg and heads straight as an arrow north to Hirtshals for the best part of 70km. This was always going to be a functional ride and by that I mean A to B on a schedule, to get the ferry to Norway. We set out with loads of time to spare and didn’t stop until we got to Hjoring for lunch, about 3/4 of the way. The place was deserted apart from an open ice cream shop and a few scattered people. We dined in a small modern square with fountains and some rather bizarre statues – it was Friday lunchtime and no one was there and Hjoring is pretty big, where was everyone? It’s like it was a holiday or something……

Got to Hirtshals far too early and again the town was deserted and a local told it was, in fact, a national holiday! We had about 3 hours to kill in a town with nothing going on, so we sat outside the only open cafe and watched what world there was go by, which basically amounted to a bunch of local drunks!

We are obviously getting more confident on our bikes around the big ferries as this wasn’t half as daunting as Harwich. Again we were first on the ferry, just after a motorcyclist who had travelled from Dublin. 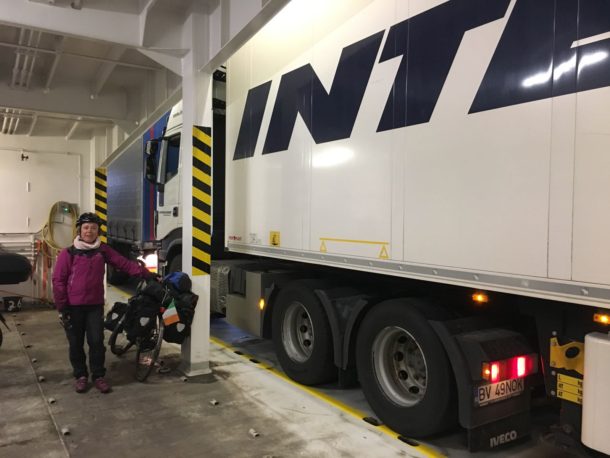 Once on board, bikes locked and cabin found we had a slight problem…only one single bed. Off to reception to find out that it’s in celing of the cabin…derrr! Back to the cabin and indeed it was – great design and memo to self…always look up!

We settled in and took a prime position in the bar (the benefit of getting on before all the cars!) and sat watching the sun go down as we pulled away. 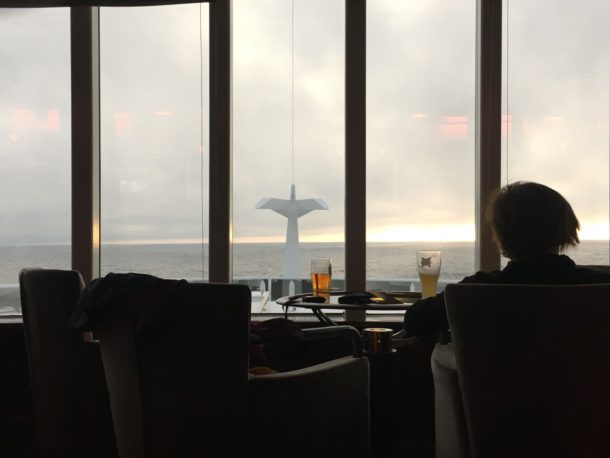 Two beers and two games of crib (4-3 to Nigel after Martina was saved by a monster 26 scoring hand!) and that was us done for the evening.  The cabin was definitely worth it as the crossing was 10 hours over night and we both managed to sleep pretty well.

Arrived in Stavanger on schedule and once again no passport checks on the way into the country, although we were checked getting onto the ferry in Denmark. Another disappointingly understated arrival in a new country. 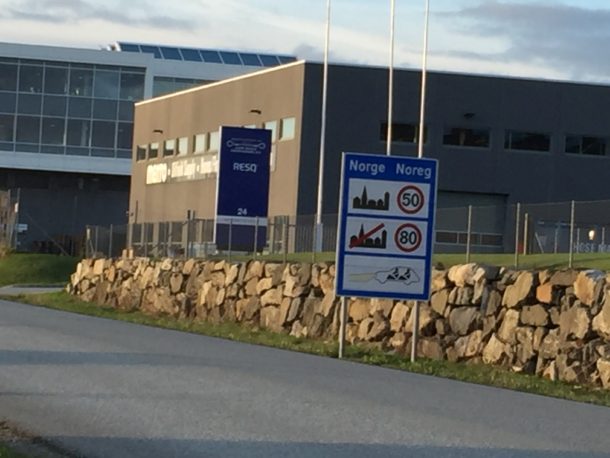 We probably should have looked at our map before disembarking as it was only when we were getting ready to go we realised that the International Stavanger ferry port is actually 20km around a fjord from the town! It was 7am and no one was up yet so we had a pleasant cycle around and into town only getting lost once in road works. We found the centre of town too early to check in to our Air BnB we had booked so decided on breakfast and had our first taste of Norwegian prices – two filled rolls, to raisin buns, a coffee and a green tea = £30 equivalent – ouch (and that’s from two people who are used to London prices)!

Decided that we could use the time well to look into a trip to Preikestolen (aka Pulpit Rock) at the local tourist offices, both of which were closed on a Saturday morning! So, off to Astrid at the Air BnB – checked in (really nice area of town and only 1km from the centre of town and local ferry terminals) and bikes stored and locked we had a snooze – one of life’s great luxuries having a nap during the day! Spent the last part of the afternoon looking around the old part of town, which is very quaint – small white, wooden houses all clustered together in a random sort of way. 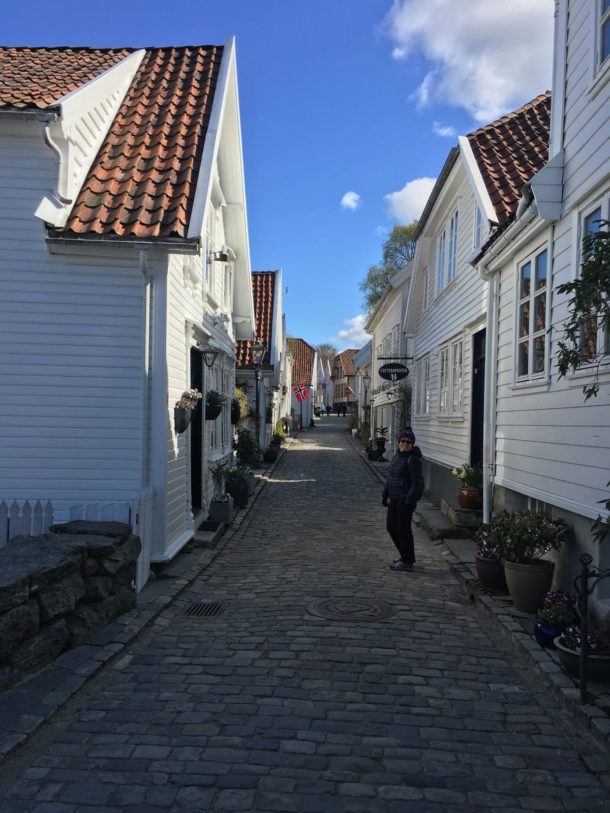 We did also contemplate eating out, but didn’t see anything that took our fancy.  Swung past a supermarket to stock and had our second Norwegian prices experience, but not until we got back to our digs – bought some beer, 10 x 33cl, (the little tins), which cost us £25! You’d think we’d have had enough, but no, we headed out to a bar recommended by Astrid where we had Norwegian price experience number three, two 33cl beers were £20. 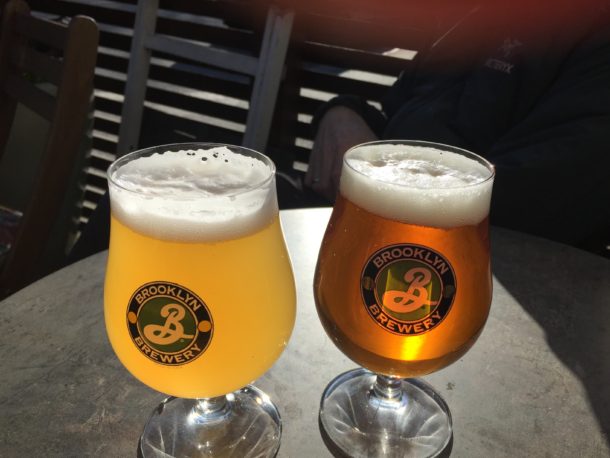 It was, however, really nice to sit in the sun, at a local place watching the world go by until it got just a bit too cold. We ended with a takeaway and an early night as we were to be up for the first ferry at 7.30 for our trip to Preikestolen.