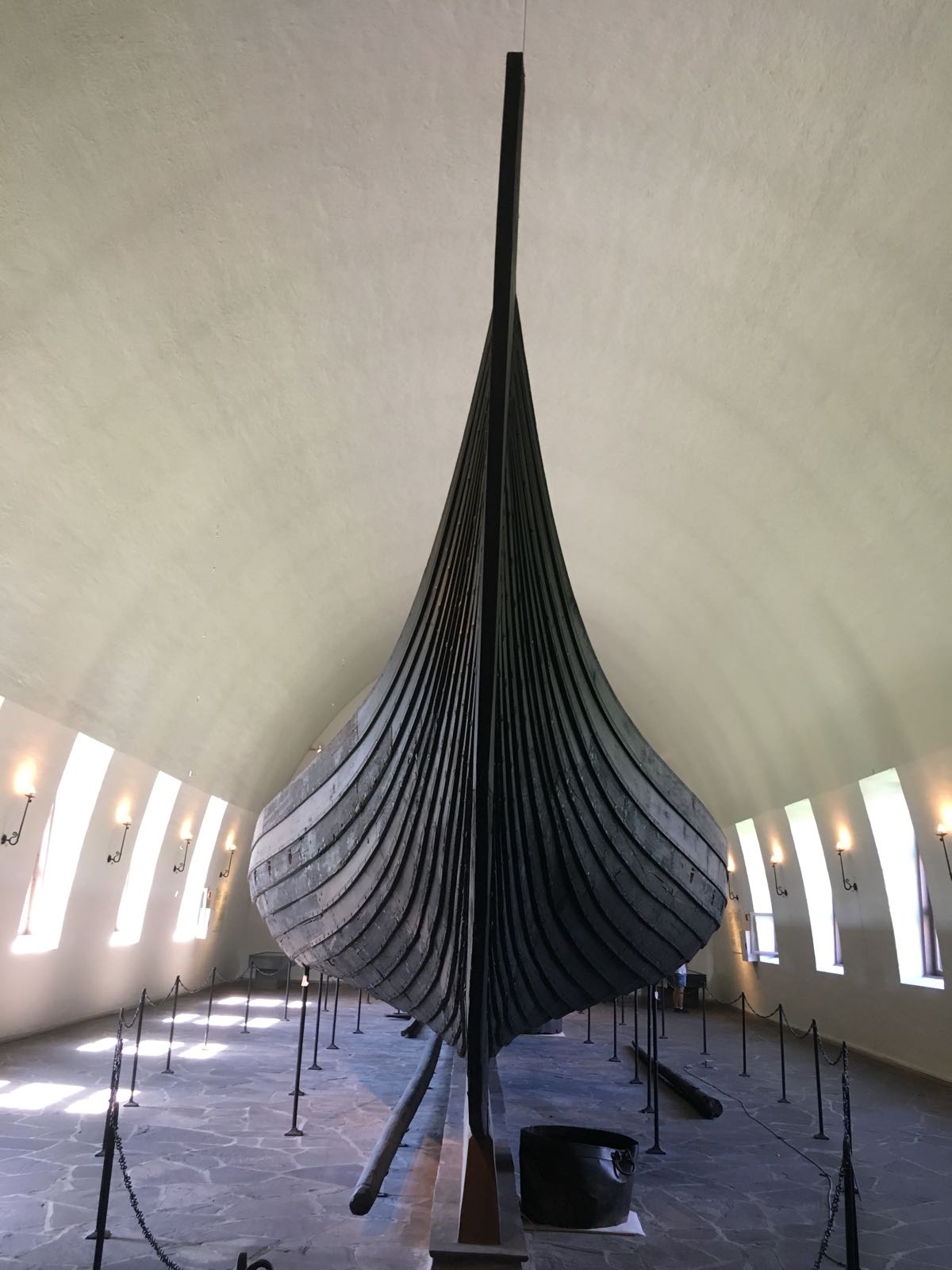 And relax we have!  We didn’t actually see our AirBnB host until day three so we had the run of an Oslo city-centre flat for most of the duration of our visit, which we cannot complain about!

The weather has been absolutely amazing since we have been in Norway, but particularly during our stay in Oslo, 25+ degrees with clear blue skies. We’ve been slapping on factor 50 like it’s going out of fashion and now have a healthy colour which is now not just windburn from being on the bikes!

One of the aims of being in Oslo is that we’d like to eat some typical Norwegian food. David gave us some tips, so we went in search of Lorry, one of the restaurants he mentioned. Having scoped it out we explored that part of town before finding a great spot in the sun outside a bar and did some serious people-watching over a beer. We retired early for proper home-cooked food and bed.

The next morning was spent doing the obligatory washing and some planning for the trip to Stockholm and beyond (watch this space for our predictions for where we will be over the next few months). We felt it was better to get this out of the way early in our visit to Oslo, so that we could enjoy the city without worrying that we hadn’t done anything yet. We did, of course, still have to stock up on food etc prior to the national holiday on Thursday.

We then wandered up to the Royal Palace (just around the corner from our apartment don’t you know?!) through the very nice leafy grounds to scope out, not only the palace itself, but also where we might want to be on the National Day. Really pretty as is the main Karl Johans Gate road between the palace and the train station. 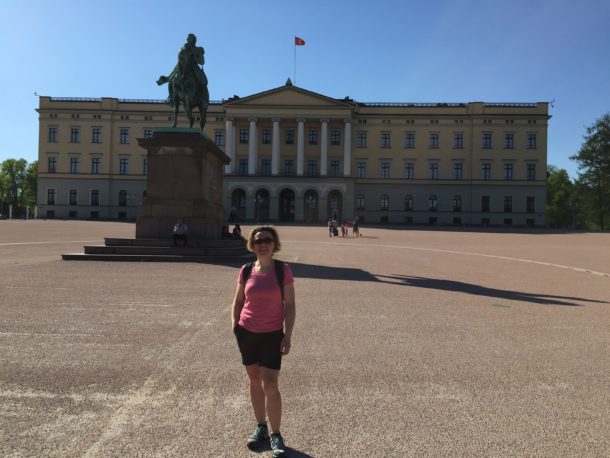 Both of us got a really good vibe off the city as we walked through – you could put it down to the lovely weather, but we think it’s great and would throughly recommend it as a place to visit. Once at the station we asked at the information kiosk about where to go on the National Day and got free tickets to the Palace area and a program of event and we also managed to stock up on camping stove fuel.

Our meanderings took us to the cathedral where we sat for a while looking at the painted ceiling – perhaps not as grand as some we have seen, but sort of special in its own way. We then went to the old part of town where there are old wooden buildings from the 1700s. We then looked for a spot for lunch number two (we still need to keep our energy up, honest!) and ended up in a very quiet, but well manicured, cemetery as you do! Sat and watched the world go past and when we left found out that this is in fact a visitor attraction is its own right and that, among others, Evard Munch (of the Scream fame) the painter is buried there.

We went back for an afternoon snooze (again, we have to keep our energy up even though we’re not on bikes!) before heading to the newly-developed dock area mainly to scope out where the ferries go from the the Viking Ship museum where we wanted to go the next day. We then had an impromptu beer in the sun people watching again and then stayed for dinner sat overlooking the port area, all very convivial! Had a bit of a late night (midnight) as we stayed up chatting.

Had a bit of a fuzzy head in the morning but it didn’t stop us going back to the ferry port for the quick transfer by boat to the Viking Ship Museum. Brilliant is about all we need to say about the museum – we both thought it was brilliant! Four Viking ships used for burials were dug out of clay back at the turn of the 20th century and they are amazingly well preserved for being the best part of 1200 years old. Not only are the ships great, but the building they are in is also pretty amazing and the way that they are lit with shadows cast on the walls and ceiling is just brilliant – a must if visiting Oslo. 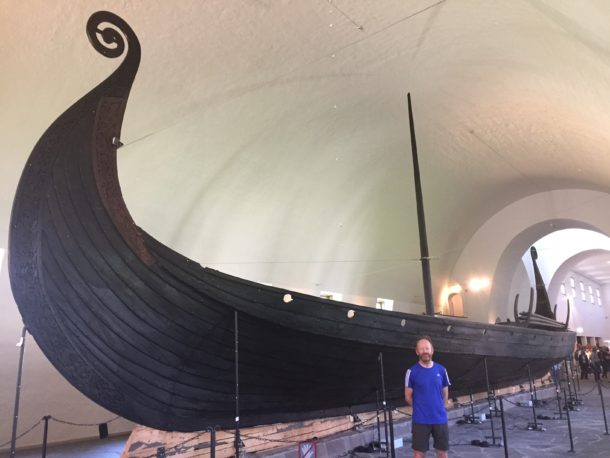 Took the boat back and then wandered up to the Akershus Fortress, which is at the top of a hill overlooking the harbour, for the views. We could see where we were sat the night before and spent a good hour or so sitting in the shade looking at the city (eating lunch number two again!). Another mooch back to the apartment via the supermarket to stock up on the essentials for our trip to Sweden.

In the evening we took David’s advice and went to a traditional Norwegian restaurant in the city. There were a few people around, but not many as most were saving themselves for the National Day festivities so we got great seats in a courtyard out the back of what is an old coaching house. The menu can only be described as unusual and there were loads of things on it that we’d never even heard of. We picked things that sounded particularly Norwegian and were presented with dishes with flavours we’d never had. Beautifully presented and with some very unusual flavour combinations – not wanting to sound like a foodie, but there were flavours in there that we’d never had and it takes a while before you can tell whether you like them or not – the verdict was that we did like them and we had a great meal! Main courses of trout and dish of the day (meatballs) featured in the pic below  – and our deserts were brownie with a blue cheese cream sauce, which Martina says was like a cheeseboard and desert on one plate….I didn’t touch it as I hate blue cheese, but had an equally fantastic home made caramel desert.  Thanks David for the recommendation! 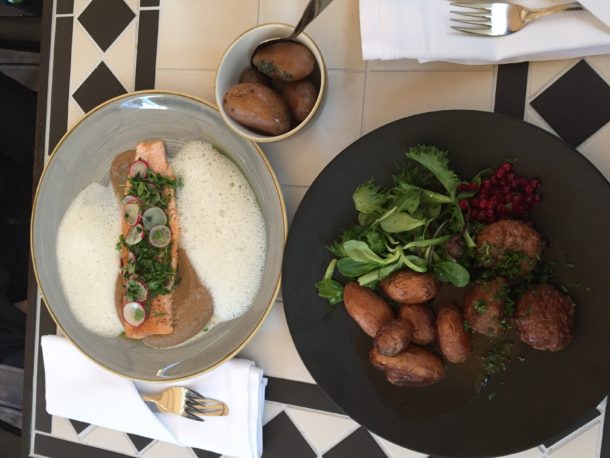 National Day dawn and we were out by 9am thinking that the palace area would already be crowded, but we were definitely among the first there. We asked the stewards about the tickets we’d got from the information centre and were allowed into the central viewing area-  bonus! Luckily we’d brought our camping stools with us like true campers, because we had about an hour to wait, so we looked like those sad Royalists who turn up days before a royal event….we had even brought sandwiches! Trust me – we don’t put this effort into our own royal family. 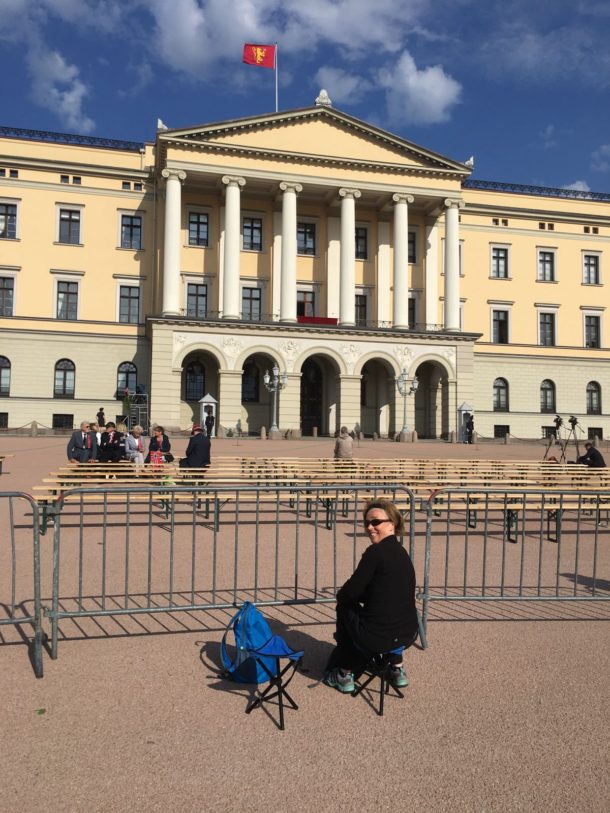 We Googled who the current Norway royals are so that we had an idea of who we were going to see. A few rather lacklustre guards marched up and down (made the RAF marching look good to be honest, and I know how shite we are!) in the build up. First up was some Norwegian folk dancing which went down very well and is very much like folk dancing around the world – you can easily hum the tunes even if you don’t actually know them! Then a military band came on and everyone sang the national anthem – who knows that the first part of their anthem is to the same tune as the British anthem?? I know….we didn’t either! Then the main event – a 3 hour procession passed in front of the royals made up of a succession of bands, older school kids with big flags and younger school kids with small flags chanting stuff. After about an hour we’d had our fill of the royals and went and sat on the steps looking down Karl Johans Gate. This meant we could see all the next parade bands etc coming towards us plus do a bit of people watching – all the while sitting in the sun! 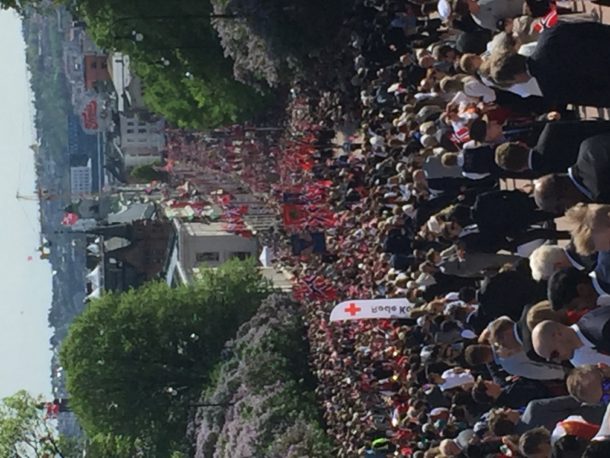 The rest of the day was spent chilling, packing and making dinner before we head off to Sweden. At bed time the celebrations were still in full swing in the neighbourhood.  Definitely a night for ear plugs ahead of us old knackers!

The upcoming route takes us to some fairly remote areas and so we may be off blog for a while.

So, here are our observations from our time in Norway:

– We had no idea that the Norwegians like American vehicles and motorcycles so much! Around every corner there is a big old American car and there are so many Harley Davidsons – far more than back in the UK.

– We hope that the outside lights on Norwegian houses are solar powered as they leave them on all the time, no matter what time of day.

-There are a lot of smokers in Norway – but fortunately it only happens outside and not in bars.  With the amount of smokers we assumed that cigarettes must be cheap and that they are a substitute for expensive alcohol…but after some googling the answer is no, they are on a par with UK prices.

– We reckon Norwegian’s don’t have a sweet tooth – there aren’t the usual aisles and aisles of sweetie rubbish in the supermarkets. We’ve only found one cake that we like and our ‘crowd pleasers’ (see previous posts reference boiled sweets) haven’t pleased the crowd much! It must be the longest we’ve ever taken to get through a bag of sweets! It’s been like something out of Harry Potter with vomit flavour etc. Plus we’ve only found one type of bread we really like. Both of these observations are, of course, probably down to our tastes not theirs.

– Bring back proper Sundays – by that we mean do very little. The Norwegians take Sunday off seriously, very few shops open, very little going on, washing cars outside their houses, having family days out, having family around, etc. It’s like the UK used to be before trading was extended to Sundays and it’s great. We’ve also seen a load of women wearing the national dress on Sunday – we have asked about this and no one seems to know why they do this, but it’s been fairly common.

– In comparison to the other countries we have visited recently the Norwegians don’t put a huge effort into their gardens. They are generally mowed, but not much beyond that. Apparently in the run up the May 17th National Day the Norwegians fix and paint their houses in preparation of the celebrations – and we can claim to have seen them industriously scrubbing, cleaning, mending and painting their houses over the past couple of weeks.

– Above all the Norwegians are very friendly. We have had many occasions where people have just randomly said that they hope we enjoy our trip. We have also been asked where we have been, where we are going, etc, etc many times – packed bikes aren’t common here and they have wanted to know all about us. This has been a common and lovely theme of our visit. Not dissimilar to the friendliness of the Irish according to Martina.

– Finally, Martina has been fascinated by the many cross-country Nordic skiers we have come across in our time here. Managed to get one one video as he was whizzing past us….makes our cycling look easy!

– And a visit to Norway would not be complete without a troll. He looks quite happy! Awaiting comments… 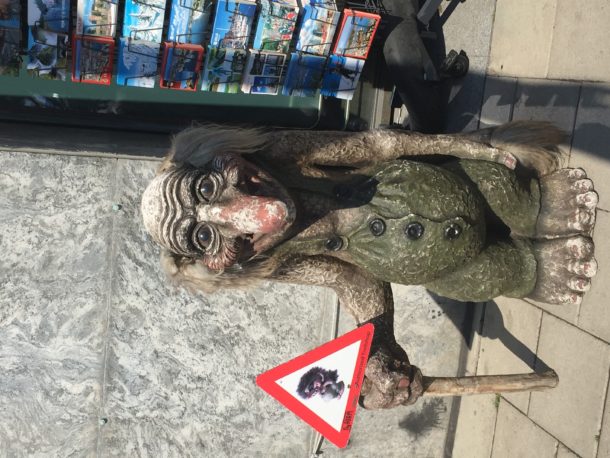