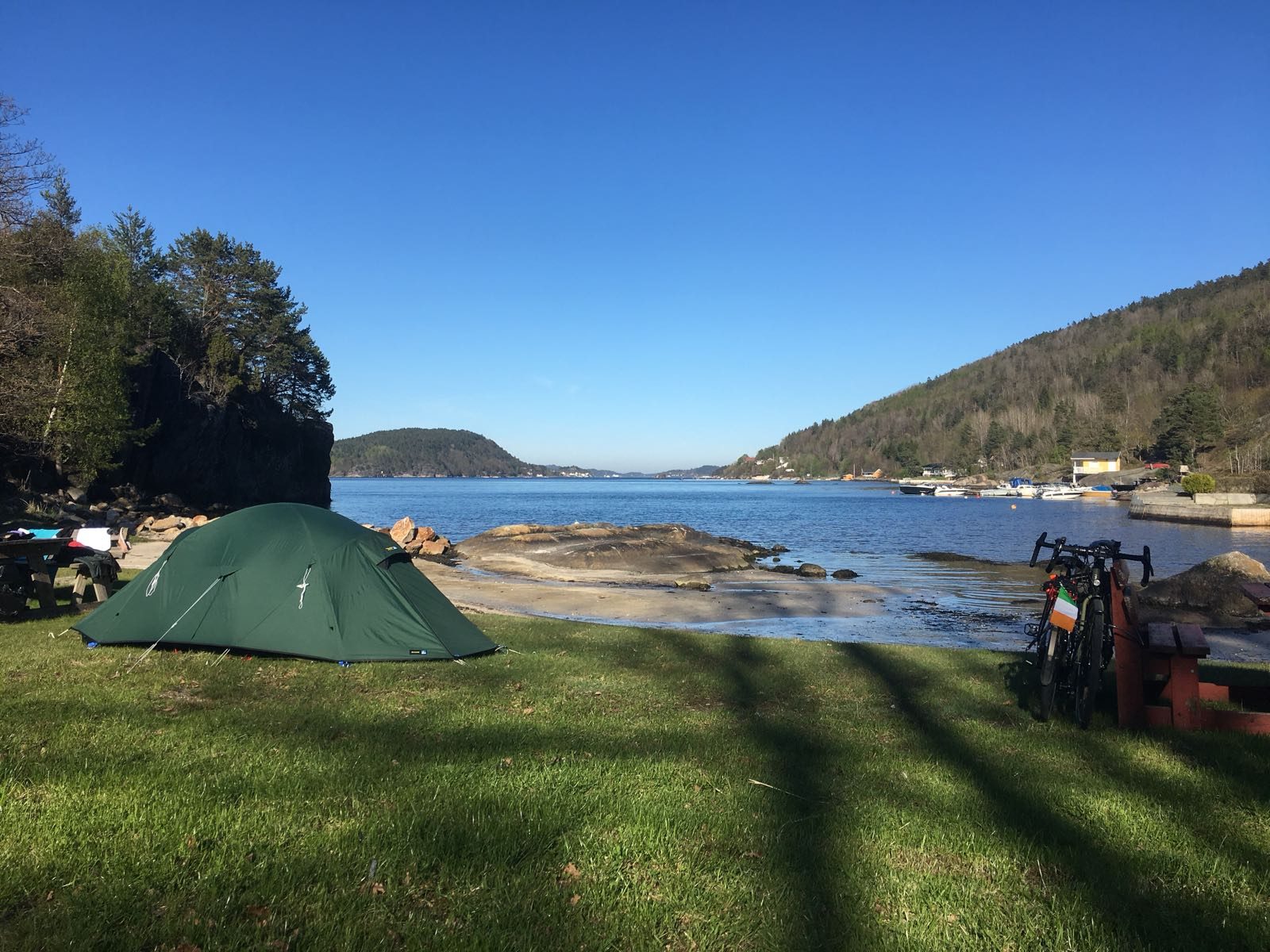 After a walk to the beach on our campsite to take in an early morning view, we reluctantly left our campsite Marivold, on the outskirts of Grimstad.   You can see why, with the stunning scenery.

The Norwegians are a hardy lot in terms of outdoor pursuits, as we had seen people coming from a swim at th beach the evening before.  Not for me at 12 degrees..! According to the owner the campsite was a German base during World War 2 and that one of the houses on the site was the officer’s mess, which was our interesting factoid for the day.

About 10km on our way we spotted a Joker supermarket…Joker by name, Joker by nature I suppose as they are a convenience store really with more extortionate prices than everywhere else….but we can’t be fussy and have to take restocking options as they come, so we stopped. There we met Janne and her son Daniel who were so interested in our bikes and what we were doing that she asked if she could have our photo and blog details for the local newspaper as they had never met long-distance cyclists before, although Grimstad was known as a cycling town.  It’s home to the Norwegian Tour de France cyclist Thor Hushovd …and I can completely see where he does his training.  Not only did we have a lovely 15 minutes chatting to her, we had also managed to find the first Norwegian cake we both liked, so as we sat in the sun indulging in an early morning snack, Daniel came running out of the shop with 2 bars of Norwegian chocolate EACH for us….to keep our energy up.  What a lovely start to the day that was…and the chocolate was pretty good too! Thank you Janne and Daniel – that really made our day. 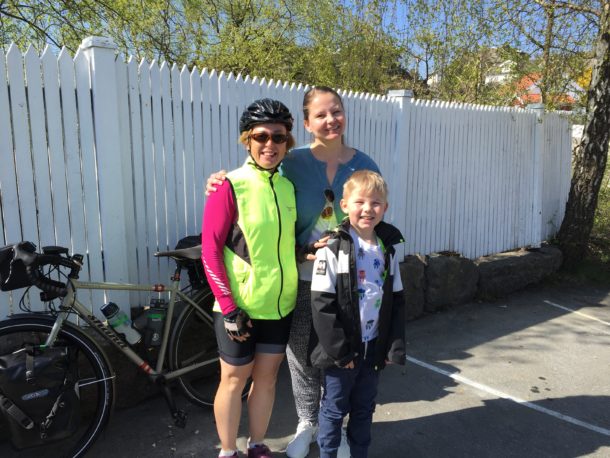 Janne had suggested visiting Hove, so we decided to make that our lunch stop.  It took us through the lovely town of Arendal and with the sun shining and blue skies it was like we were on the Amalfi coast in Italy…and lots of people just sitting outside cafes and restaurants relaxing in the sunshine tempted us to stop, but we persevered to Hove, for a lunch stop in a coastal national park…only spoiled by a man sitting next to us who talked non-stop at the top of his voice. Had it been in English we may have been interested in eavesdropping, but sadly our lack of Norwegian meant that it was just loud background noise.

Onwards for the afternoon and although a very scenic route, turned out to be a lot hillier and tougher than we had planned…or hoped for.  What we are also discovering along this coast is that our journeys are very much dictated by campsite location and they seem to be a lot sparser than they have been.  We had struggled to get any to answer their phones until around 4pm, but finally we got a base to head to on the outskirts of Risor, but it turned into a 94km day….and the last 6km were all uphill. However, we were rewarded with a fantastic pitch overlooking a fjord. Both of us had completely failed to see the kitchen and common room area as it was upstairs above the shower block (again, always remember to look up!), so we cooked outside our tent area….which wasn’t all that bad with the view we had. 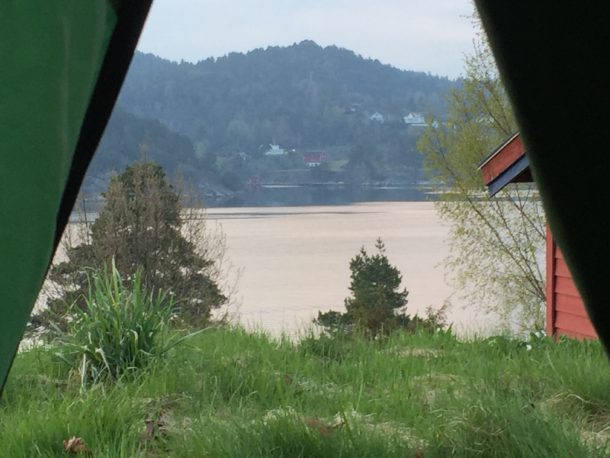 But when the sun went down it was cold, so it was early to bed again.

A misty morning meant we were a bit late on the road as things took longer to dry out with no sunshine, but we had promised ourselves a shorter day today as legs were starting to feel a bit heavy.  We had planned to cycle into Risor to take a ferry, but thankfully Nigel had the conversation with the campsite owner who told it is was out of the water for maintenance, so it saved us a wasted 20km trip around the peninsula.  It did mean a longer trip to get to Stabbestad….but again amazing views on tough and steep hills on narrow roads all day.  Had a lovely lunchtime stop by a lake. 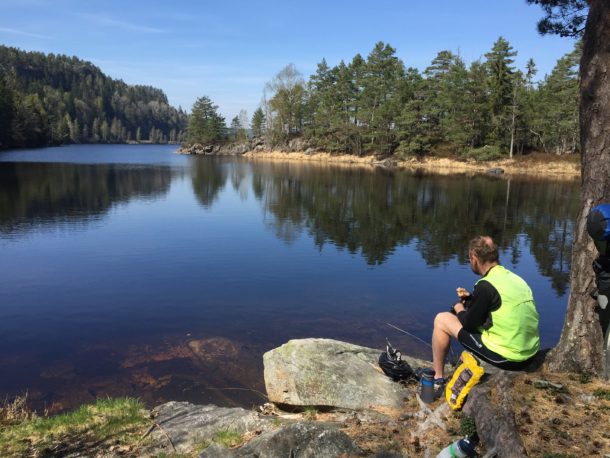 Got to our campsite in Kragero at a decent time to enjoy the rest of the afternoon. Our campsite host in Risor had rung ahead for us in the morning before we left, but when we got here the phone kept ringing out so I tried the other phone number that was advertised on the reception. And then it got confusing…neither number answered, then both rang back.  The first person was the one who knew we were coming so told us we could camp at the beach and he would come latter to see us and take our money. On our way there, the phone rang again and the man asked who was calling….when I said I was at the campsite he said “the campsite is closed”.  Oh what to do…..ring the first guy back and check, or just ignore the second call?? Yep, we ignored the second call and started to set up, but felt a bit uneasy thinking/expecting someone is going to turn up to tell us to “get off my land”.  But horrah, man number one turned up about an hour later and took our money, so we no longer felt like trespassers.  (I didn’t mention the other call, as I had a feeling that was the boss!) As well as being miles away from another campsite that may or may not have been open this is the view we had…so am glad we weren’t told to leave! 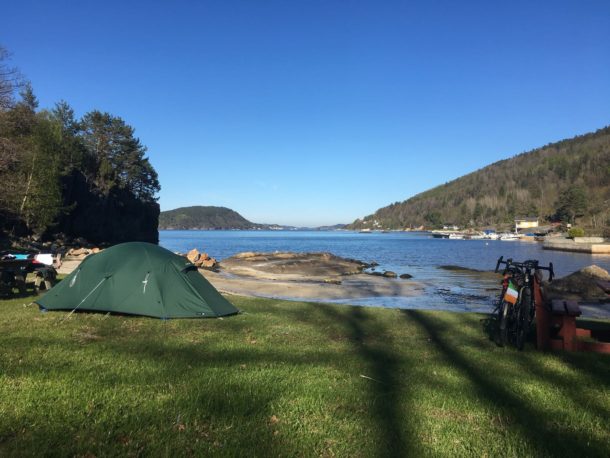 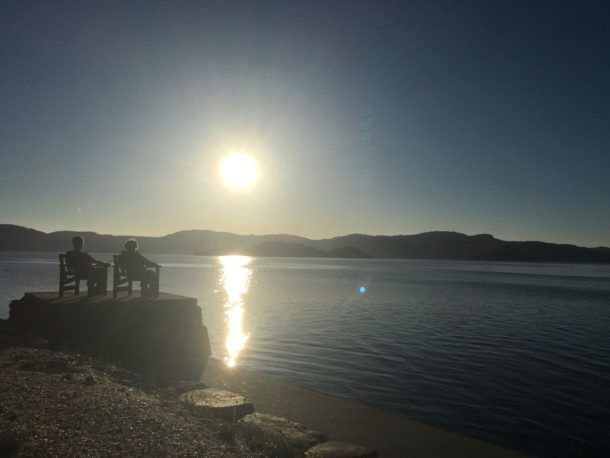 Second photo above was done on timer, with Nigel sprinting between set-up and getting back to his seat.  I had the luxury of just sitting there and enjoying the view.

Where we are struggling a bit at the moment is gauging distance from place to place ….we thought Kristiansand to Oslo would be about 5 days, but that looks unlikely to happen.  The crinkly coastline and the tough hills mean we are slower than we thought, despite covering decent mileage most days.  Also, the camping season doesn’t really start until mid May so many of the campsites aren’t open yet…and then that dictates where we need to travel to.  We could wild camp I guess, but it’s still cold when the sun goes in so not our preferred accommodation choice. Anyway, I guess we will cross that bridge when we come to it…we have been more than lucky so far!  And tomorrow morning we take an early morning ferry across the fjord so that should cut out at least some hills and take us a bit closer to Oslo….

One last point, it has been quite a remote part of the country with just the odd scattering of houses and some logging and quarry companies. So, we haven’t seen a cash point for a few days now and cash is running a bit low…we have £7.50 equivalent, so hoping the ferry takes cards tomorrow morning….