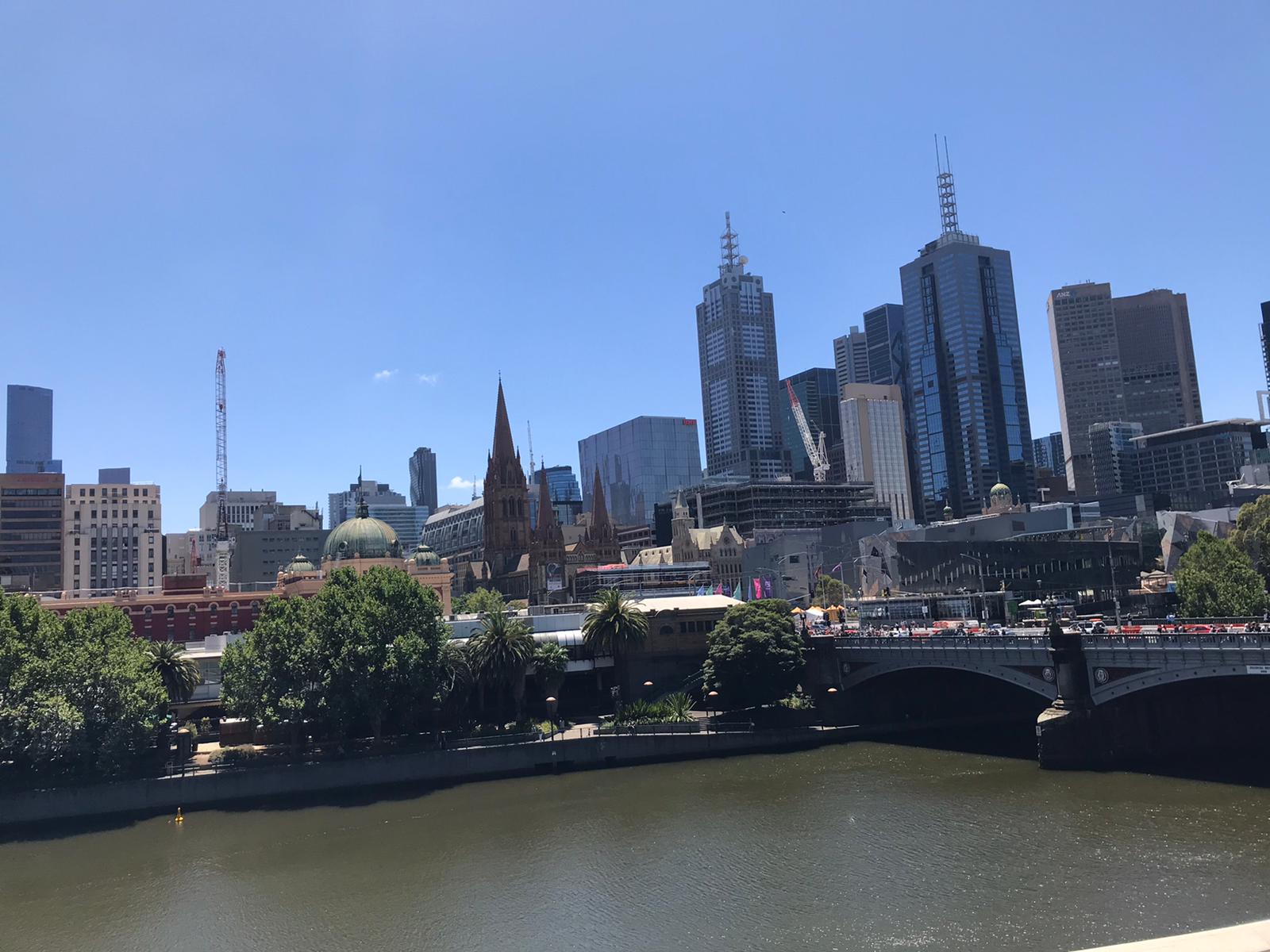 So a whole 2 weeks in Melbourne, which is the longest we have put down roots in one place since we set off in April 2018.  We had originally planned to go to Tasmania for a few days and had kindly been offered a place to stay by Sue, who we had met in Hpa An in  Myanmar, but as we are at the height of holiday season in Australia the ferry was ridiculously expensive so we opted to stay put in Melbourne and completely relax – and Cara and Yael very generously allowed us to stay with them for 2 whole weeks in their great apartment in the lovely city suburb of Elwood.

We absolutely loved Melbourne and when you throw Christmas and New Year into the mix it has been a fantastic couple of weeks.  Christmas morning was a walk along the beach to the marina at Brighton…..

….followed by a Christmas BBQ with Cara and Yael….

It was definitely Christmas with a difference. We were in the city centre on Christmas Eve and it’s the total opposite of Christmas in the U.K. and Ireland….

The shops weren’t rammed with last minute shoppers – even the supermarket was not jammed with stressed people buying as if a famine had been declared – and it was all very understated with very little tinsel or decorations. On Christmas Day the beaches were packed with people enjoying BBQs, paddle-boarding or swimming wearing Santa hats or tinsel and generally having a lovely time outdoors.  There was even a coffee van and an ice-cream van on the beach, each of them doing a roaring trade.  And then that was it! Although Boxing Day is still a holiday, it felt like business as usual as all the silly hats and tinsel were gone and people were out walking, cycling and eating in restaurants like a normal weekend. Definitely our kind of Christmas.

For the remainder of our time here as well as eating and resting we managed to pack in plenty and take in lots of the sights and experiences that Melbourne has to offer.  It is definitely a city of contrast with the old and the new blending in very well together…

Our sightseeing included the circle loop tram, which ferries tourists around all the tourist sights for free….

…a visit to the Lanes, which date back to the Victorian era and were originally used as service laneways for horses and carts or associated with the gold rush era slums.

Melbourne is renowned for its coffee culture so the lanes are now home to cool coffee coffee shops, cafes,  bars, shops and street art….

…and a great place to just hang out and people-watch…..

We met up with our new cycling friend Adrian who was in the city at the same time and we had a great day being tourists and eating our way around the city like all good cyclists do….

The National Gallery, which is the oldest gallery in Australia, was fantastic and could definitely give the one in London a good run for its money with paintings and sculptures from Picasso, Dali, Turner, Constable, David Hockney, Andy Warhole and so many more on exhibition for free.

At the State Library we saw Ned Kelly’s coat of armour, bullet dents and all, which he wore for his Last Stand when he was captured and subsequently executed in the nearby Melbourne Gaol…

And although we aren’t cricket fans, the Ashes were also on display there, which was pretty cool…..

There is some fantastic architecture and colonial houses and buildings throughout the city.  An old Melbournian rumour goes that the design for Flinders St train station got mixed up with the plans for train station in Mumbai back in the day and apparently the grander building in Mumbai (which we saw when we were there) had been originally destined for Melbourne. But we still quite liked Flinders Street Station…

We walked along the Southbank, visited St Paul’s Cathedral, St Patrick’s Cathedral, Queen Victoria Market (which unfortunately we thought wasn’t half as impressive as Adelaide’s Central Market) and the Royal Arcade which had a tea shop that as well as having these amazing cakes on display, has a 3-month waiting list for its afternoon tea….!

We also saw the smallest penguins in the world, fairy penguins, come ashore at sunset to their nests at St Kilda’s Pier, which was walking distance from Cara and Yael’s – completing our wildlife adventure in Australia (it was dusky when the picture was taken, hence the poor quality)…

Our visit to The Immigration Museum was brilliant and in a few hours we crammed in a mass of information about the multi-cultural melting pot that is Australia….including the good policies such as the Ten Pound POM scheme when Brits paid £10 to migrate to Australia after World War Two….

…as well as the bad and the ugly policies that have all helped shape the country into what it is today. Until now I never knew that there had been a “White Australia” policy that blatantly discriminated against non-Europeans (especially the Chinese) coming to Australia …or that it had been in place for so long!

On New Year’s Eve we got ourselves a bird’s eye view of the fireworks from a vantage point along the beach – Point Ormond….

And on New Year’s Day , Tom and Sheena, who we originally met in Bratislava, and randomly bumped into in Elwood, took us to the nearby Yarra Valley for a walk through an amazing forest of Redwood trees….

….and a visit to the top of Mount Donna Buang, the closet snowfield to Melbourne with some fantastic views of the valley below….

But of course we only tackled all this after a delicious cream tea….

Some interesting facts that we picked up about Melbourne during our visit.  It was ranked world’s most liveable city for seven years from 2010 to 2017 by the Economist Intelligence Unit and although Vienna now takes the top spot we can see why it continues to rank so highly. And despite the fact that it is a relatively new city (founded in 1835) it has a fascinating history.  There has always been a rivalry between Melbourne and Sydney partly because one month after the State of Victoria was founded and separated from the colony of New South Wales, a gold discovery in Victoria was announced and Melbourne subsequently boomed. In the Gold Rush that followed, Melbourne became the wealthiest city in the world in the 1800s….and deprived Sydney of all that wealth! The Marvellous Melbourne era followed when all the money earned during the Gold Rush was spent and invested in very grand buildings, many of which are still standing and being used today.

In 1901, after Australia became a Federation and had independence from the U.K., Melbourne became the capital but only while Canberra was being built as the new capital. And it’s still a growing city. Current statistics are that one in three Melbournians were born overseas and that 2000 people are moving to live there every week.  In fact its growing so fast that this skyline didn’t exist 5 years ago….

It was the first city in the world to get the 8-hour working day and it also has the third biggest Greek-speaking community in the world! We particularly loved the fact that they call themselves Victorians….being from the state of Victoria, rather than dating from the Victorian Era!

I couldn’t write this final blog of our time in Australia without mentioning the horrendous bushfires that are gripping the country – their worst fires in history. We have been so very lucky on this trip not to have had any problems as we crossed the country, but so many people have lost so much and so much wildlife has been destroyed and it’s still early in their summer season so it’s not over yet by a long stretch.  What has really shocked us though is recent news reports that over 200 of the fires were deliberately  started.  Why would anyone even consider doing that??  On our last few days the smoke from the bushfires in East Gippsland was very visible throughout the city, which was a stark reminder of how lucky we really have been.  So let’s hope it rains for the Aussies soon.

A grand finale on our last night was dinner and drinks with Nigel’s nephew Max and his girlfriend Beth who are in Australia on a working visa and made the trip to Melbourne to see us before we left.

What a fantastic couple of weeks here and indeed our entire time in Australia. We arrived on 17th October knowing only one person in the entire country and just over 2 months later we leave with a lot of new friends, fantastic memories and a promise to ourselves that we will come back.  We have a lot more learning and discovering to do here!