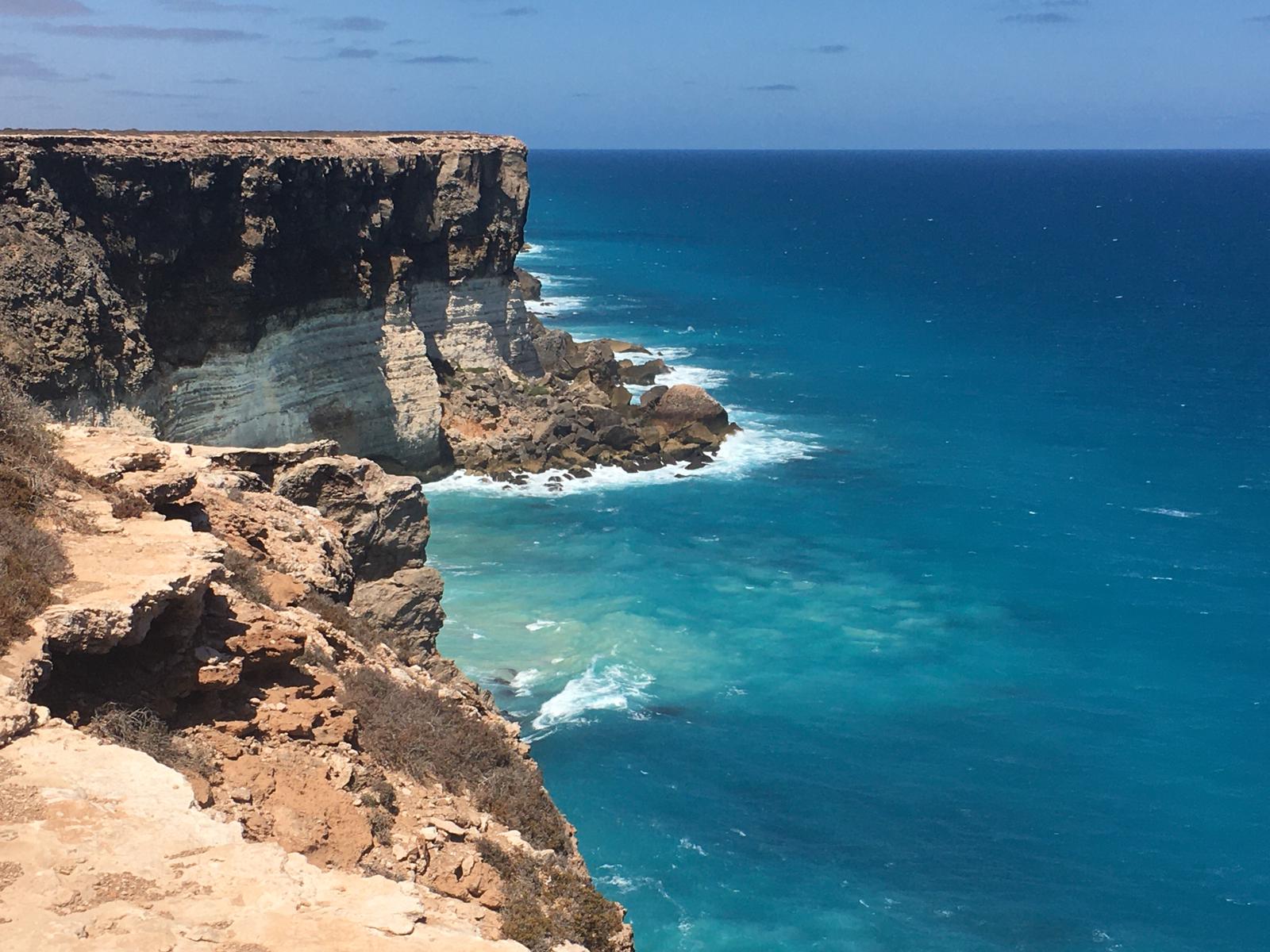 Mornings are really cold at the moment, especially when it’s windy. Then it heats up a bit mid-morning, and by lunchtime it’s generally boiling – so we have to dress in layers and peel them off as the day goes on.  It then gets cold in the afternoon so after a few sweaty hours on the bikes we are back to wearing wooly hats when putting up the tent! This morning was no different, so it was a pretty chilly start to the day when we said our goodbyes to Deano and headed off for a short day into Eucla. We had a bit of a headwind but other than that it was a pretty uneventful ride with only one interruption from a friendly caravanner Martin who stopped to offer us a cold drink by the side of the road.

One thing we have both commented on is the amount of rubbish along the side of the roads. We are in the middle of nowhere and there are just hundred of bottles, cans, toilet toll, food packages etc everywhere.  It has to be from travellers throwing rubbish from their vehicles and there is absolutely no need for it as there are rubbish bins at every parking or rest area we have stopped at. We can’t understand that people who want to see this part of the world just trash it because they just can’t be bothered to take their litter home!  OK, rant over….

Coming into Eucla was our first sighting of the coast in what seems a long time, and we could see the start of some cliffs as we came up the Eucla Pass.  (You can see a very small me coming up the hill in the photo!).

We arrived at the roadhouse at 11.30 – too early for lunch so we decided to break open the home-made chocolate chip cookies that we had bought in the Mundrabilla roundhouse.  Very buttery, chocolate-y and just what we needed after a hard morning!

We were reunited with the food package that we had sent on from Norseman, which was a huge relief as we were almost completely out of food….but there was limited excitement among us lifecyclers at the thought of yet MORE pasta and rice dinners in the days ahead! Because we wanted to get our food bags sorted as well as get some laundry done we opted for a motel room rather than camping – and we are so glad we did as the campground was yet another dusty car park.  We sat out the heat of the day in our room and in the early evening we took a wander to the lookout and in search of the Nullarbor Nymph.  The story goes that in 1971 some local trappers claimed to have seen a half-naked woman feeding kangaroos in the area. A photo of this woman caused a bit of an international media frenzy with lots of journalists descending upon Eucla to follow-up the story. It was all later revealed as a prank and the picture was of a local model.  We thought there might have been a statue in the area, but alas not….so it was a pasta dinner and an early night for us.

On the road for 5.30am but we got split up in the maze of roads and roadworks getting out to the main road so we lost 10 minutes looking for each other….not a great start!

The reason for setting out so early is that we cross into a new time zone today, so 15km down the road we left the state of Western Australia and entered South Australia – 1 hour 45 mins ahead in time.  Considering we put our clocks forward 45mins a few days ago in Cocklebiddy we are now 2.5 hours ahead of Perth time.  Very bizarre to jump so far forward in such a short space of time and it is likely to play havoc with our cycling in the coming days – but I am sure we will adapt.  Crossing the state line was no big deal….just a sign announcing the new state and a new time zone….

…but almost immediately the shoulder that we had cycled on in Western Australia disappeared and we were on single lane roads with not much of a safety net to protect us from the traffic.  What is surprising is that considering how straight and open the roads are, traffic generally adheres to the speed limit and you don’t have idiot drivers speeding dangerously along the roads.  I know we have said that the trucks pass us at speed, but they are still within the limit.  It’s their sheer size that causes us problem, not their speed.

As the day went on, the crosswind that we started with became a strong headwind and we battled that for the rest of the day.  Being along the coast, the dry parched landscape became a bit greener, but it was still pretty remote and wild. Along the way we took in some stunning scenery of the Bunda Cliffs, which form part of the longest uninterrupted line of sea cliffs in the world.

It was a nice break from the battering winds and we got to see a large pod of dolphins meandering along the coast.

As the day wore on the wind definitely took its toll on us. We were having a bit of a shouting session A – to be heard above the noise of the wind and B – we were tired and a bit narky with each other.  Out of the blue a cyclist pulled up alongside me and said “helloooo” in a Scottish accent.  Honestly it was like something from a Billy Connelly sketch!  Angus from Edinburgh was on a cycling trip from Perth to Sydney.  He was much younger than us, was travelling with less luggage and was cycling a 200km distance that day.  He cycled with us for a bit, avoiding a few road trains during our chatting…..

But he had to leave us tortoises behind or he never would make his destination.  Still, it was nice to have new company on the road for a while ….and by the time he left we had forgotten what we had initially been narky about!

At the 97km mark there was a rest stop, so feeling pretty exhausted we decided to stop, set up camp and chill for the afternoon.

Until now, all the rest areas where we have stopped have generally had other people around, so when no one else joined us by bedtime we were starting to wonder if there was something we didn’t know about this site….maybe snakes or dingos?? We were slightly spooked when we got into the tent for the night, but not spooked enough to stay awake as we were pretty shattered from the day we’d had.

We heard the sound of wild dingos howling in the distance as we set out this morning, but far enough way to know that they hadn’t been near us in the night….or if they had, neither of us noticed as we had both slept like logs! And a good job too as were straight into a fairly strong headwind that set the tone for the morning.  Pretty gruelling cycling and it wasn’t helped by the fact that the terrain was undulating, so it was a double whammy.  35km into the journey we took a slight detour to take in more stunning views of the Bunda Cliffs……..

….and when we got back on the road it just seemed to get harder and harder.  We didn’t seem to be making any progress judging by the distance markers at the side of the road, but on we ploughed until we reached a classy lunch stop…

Over lunch we discussed the possibility of not making it as far as the Nullarbor Roadhouse, our planned destination for the day, especially if the wind increased further – but we had to at least give it a try, so we soldiered on.  Miraculously the strength of the wind seemed to die down a bit and it eventually changed direction to become a crosswind so things started to feel easier. When we saw a sign for 9km left to go, instead of conserving energy to get there, we shouted and cheered our way to the roadhouse, euphoric to have made it after what seemed an impossible feat.

Roadhouses on the Nullarbor are nothing at all like we expected.  I thought they would be similar to what I had seen in the film Priscilla Queen of the Desert – an old-style building that housed rooms, a restaurant, some groceries and fuel pumps and appeared like an oasis in the middle of the desert.  Something a bit like this…..

…..which is a reconstruction of the original Nullarbor Roadhouse. Only the last part is true of the modern versions….they are more like modern service stations with portacabin accommodation and a dusty caravan park thar allows tents to be pitched if you can find a decent spot.  The staff are generally efficient but not overly-friendly, which I guess is understandable when you consider the number of people they have passing through.  We made it to the ‘real’ Nullarbor Roadhouse around 4.30….

The staff were lovely and by far the nicest we have met so far, so after celebrating with tea and cookies we checked into our room and settled down for the day.  Later in the evening when we went to the restaurant for dinner we saw a tandem bicycle parked outside.  Inside, we met two English women who are attempting to break the Guinness Book of Records for 2 women around the world on a tandem.  They had cycled a similar distance to us that day but a tandem is more difficult to manage in windy condition, especially passing the road trains, so they were absolutely exhausted. We had a nice chat, but not for long unfortunately as the day had taken its toll on all of us and we ready for bed.  But at least we had a day off to look forward to….the girls had to do it all again in the morning!

Although it was our day off it was never planned as a rest day.  We wanted to see Head of the Bight, which is a Bay at the most northern part of the Great Australian Bight, and as it’s 12km off the road it wasn’t something we could fit into a normal cycling day and do it justice.  So we had a lazy get up and set off on naked bikes around 9am.  It was into a headwind but it was so much easier on empty bikes and knowing that it wouldn’t be for long!  As well as stunning views of the Bunda Cliffs, in whaling season it’s where southern right whales come to calve during their winter migration, but being out of season we “only” had the cliffs to view.  And what a view it was!

And with all the time in the world to spend here we had a lovely few hours just taking in the views over an early lunch, before returning to our room for an afternoon snooze and a planning session for the next few days. The forecast is for very hot windy weather so we have to plan ahead carefully to ensure we manage the conditions as best we can.

One thing that you may not expect to find on the Nullarbor is a golf course….but the 18-hole course, the Nullarbor Links, is said to be the longest in the world, and is spread out along roadhouses and roadside shops. Neither of us are golfers, but it does make for an interesting photo in the middle of nothingness…..