Hanging out with the natives 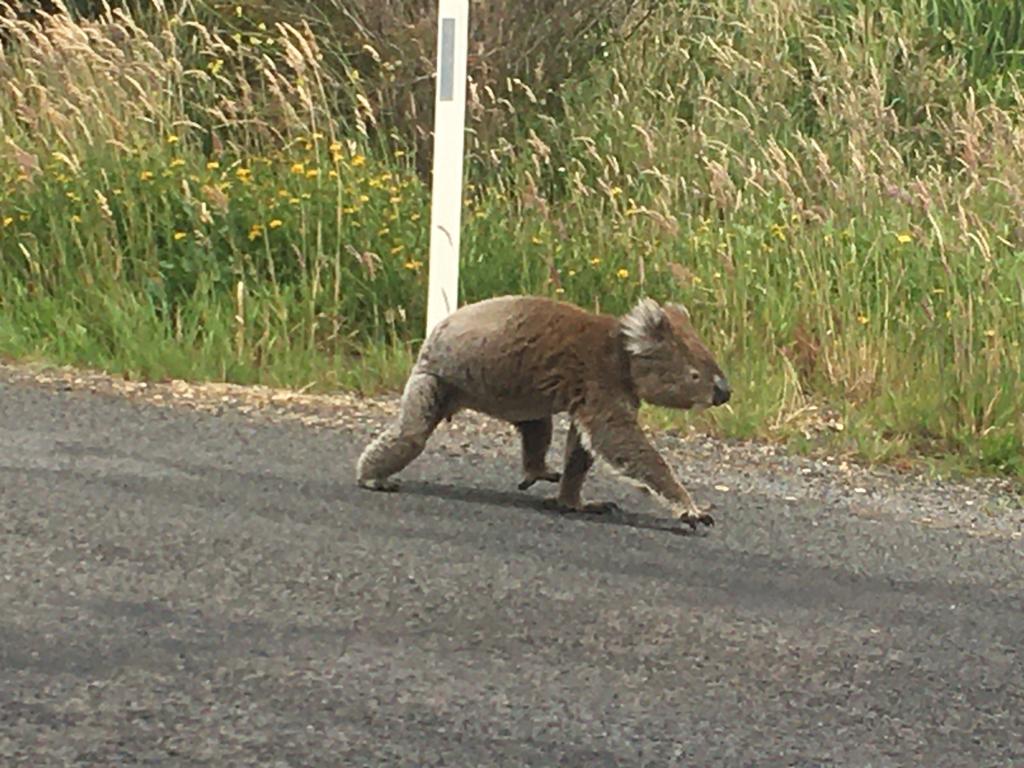 It was cold and damp when we left Nelson so we were glad to be leaving a cabin and not having to pack up a wet tent.  As we have the difficult cycling part of Australia almost behind us now we are starting to feel in a holiday mood and allowing ourselves take things a bit easier.  So we are meandering our way to Melbourne with a few days off in between.  Today’s journey was 90 km to Portland where we would have a day off to explore the area, which we had heard was lovely.  As it was a Saturday morning the road was nice and quiet, which was a good thing as apparently on weekdays this particular stretch is treacherous with large trucks carrying logs to Portland – the biggest exporter of soft wood chips in the world; exported to China and Japan primarily for wood pulp.

Nigel mentioned in his last blog that we had crossed into the state of Victoria just before we arrived in Nelson and unlike transitioning from Western Australia to South Australia, the change in landscape when crossing the state line here was very obvious….it was as if we had been transported back to Sweden or Norway with huge pine forests all along the route as well as grey skies and drizzle.

But it wasn’t unpleasant cycling and we made it to Portland around lunchtime, where we had a coffee by the marina before going to meet Robert and Vivienne our Couchsurfing hosts for two nights.  As has been the case with so many of the Australians who have hosted us, within minutes of meeting them it felt like we had known them for years and it didn’t take us long to settle in. We were given our own private accommodation above the garage beside the main house – an old 1850s house with a fabulous garden and sun room, where we joined them for our second lunch of the day.  We showered to scrub off the grime and although the weather wasn’t brilliant they took us on a drive to Cape Nelson to see just some of the spectacular coastline in the area, that could have been in Scotland or Ireland….

…as well as a colony of gannets, which you can see just beyond the gate in the photo.

The evening continued with lots of chat, laughter, drinks and fantastic food, including mince pies for dessert…

If Robert is looking a bit shifty in the picture it’s because he was trying to hide the “uncouth” (their words not ours!) tub of ice-cream from the camera. : )

Vivienne is an avid walker so suggested a 2-3 hour walk along Cape Bridgewater as our activity for the day.  Robert is not into walking but came with us for a pre-walk coffee on the beach while watching the local kiddies go through their surf lesson paces.  The route took us past a petrified forest, which looks like a forest of tree roots turned into rock – but it isn’t.  It’s actually a natural collection of limestone called “solution pipes”, eroded by millions of years of rainfall.

Next up was corner after corner of fantastic coastline that photos don’t really do justice to….

….and a few inquisitive wallabies …

After that we came across an echidna….this is our second sighting in Australia, although the last one curled up and hid from us so we couldn’t take a photo. It has spines like a porcupine (which is what we thought it was), a beak like a bird, a pouch like a kangaroo and lays eggs like a mammal.  And at 15-20 million years old is estimated to be one of the world’s oldest surviving mammals.

As if that wasn’t enough, after bowls of chips for lunch in the beach cafe we saw this little fella on our way home – slowly waddling down the middle of the road!

…who then just decided to climb a tree…

What a fantastic afternoon – like an interactive walk with David Attenborough!

In the afternoon Nigel and Robert headed out to Robert’s members club, a social club that dates back to 1800s for people to meet, hang out, play snooker or billiards and have a beer or two.  (Bring Your Own!). Women can go too but neither myself or Vivienne were bothered so we left them to it.  When they returned it was another fantastic dinner and then it was time to pack up and have an early night in preparation for an early start.

Portland and the area has an interesting history, which Robert told us lots about. It’s located along the what is known as the Shipwreck Coast, where there were were around 638 shipwrecks in the 1800s.  And while we have always believed it was the British who first discovered Australia, it turns out the Portuguese got here around 250 years before them in 1520…even if they didn’t settle. Next up were the Dutch in 1606 who landed on the Western and Southern Coasts, but found it to be too inhospitable. Then the English arrived closely followed by the French and a few other European explorers.  But it was English who were the first permanent settlers in Portland and other parts of the country.  Although whalers and sealers were already established in Portland in 1790s, two of seven English brothers – the Hentys – were the first permanent European settlers here in the 1830s – the first in the state of Victoria.

We headed off early without disturbing Robert and Vivienne and took a lovely quiet coastal route along Dutton Way for the first 10km or so.  We then joined the main road and although the traffic wasn’t scarily busy, we are definitely aware that we are coming into more populated areas than we have been in Australia for a long time. And because the shoulder was very narrow in places it wasn’t a great morning’s cycling.

We stopped for an early lunch along the river in Port Fairy, a town originally called Belfast after the home town of the guy who established it. Apparently there is still a big Irish community in the area and when we cycled a few kilometres further along our route through Killarney we came across the Australian version of the Blarney Stone…

From there we went to Warrnambool to meet Joy and Geoff who we were staying with for two nights.  Joy is a cousin of Simone’s (a friend of my sister’s friend Bairbre) who we met for the first time and stayed with in Wassenaar on our first night out of the U.K…..another tenuously-linked connection on our travels who very generously offered to host us and act as tour guides for a day for us.  Australian hospitality that just keeps giving!! We had a very chilled out relaxing afternoon and evening eating, chatting and having so much fun that we were late to bed!

After a lazy get up and a few chores we headed out for a day of sightseeing around Warrnambool.  On the way into town yesterday we had cycled up Tower Hill, an dormant volcano and now part of a game reserve on the outskirts of town, which we hadn’t had time to explore.  So with the luxury of Geoff driving we went to visit that.  Fantastic scenery….

Continuing the Australian wildlife theme from the weekend we got up-close and personal with some emus that were just wandering around….

….before heading for lunch to the old Irish heritage town of  Koroit.  The drive there was like being transported back to Ireland; lots of green fields, potato crop, old Irish style buildings and houses with Irish flags flying at full mast….even the street Christmas lights were shamrocks!  But being in Australia we had to have an Aussie pie for lunch….

Later in the afternoon Geoff took us to visit his farm on the outskirts of town via the amazing Hopkins Falls, which although didn’t have much water was still more than worth the visit….

…and then it was a visit to the best hamburger joint in Warrnambool for the best burger we have had in Australia. The perfect end to yet another fantastic day!