Wetlands, dunes and one of our best days cycling 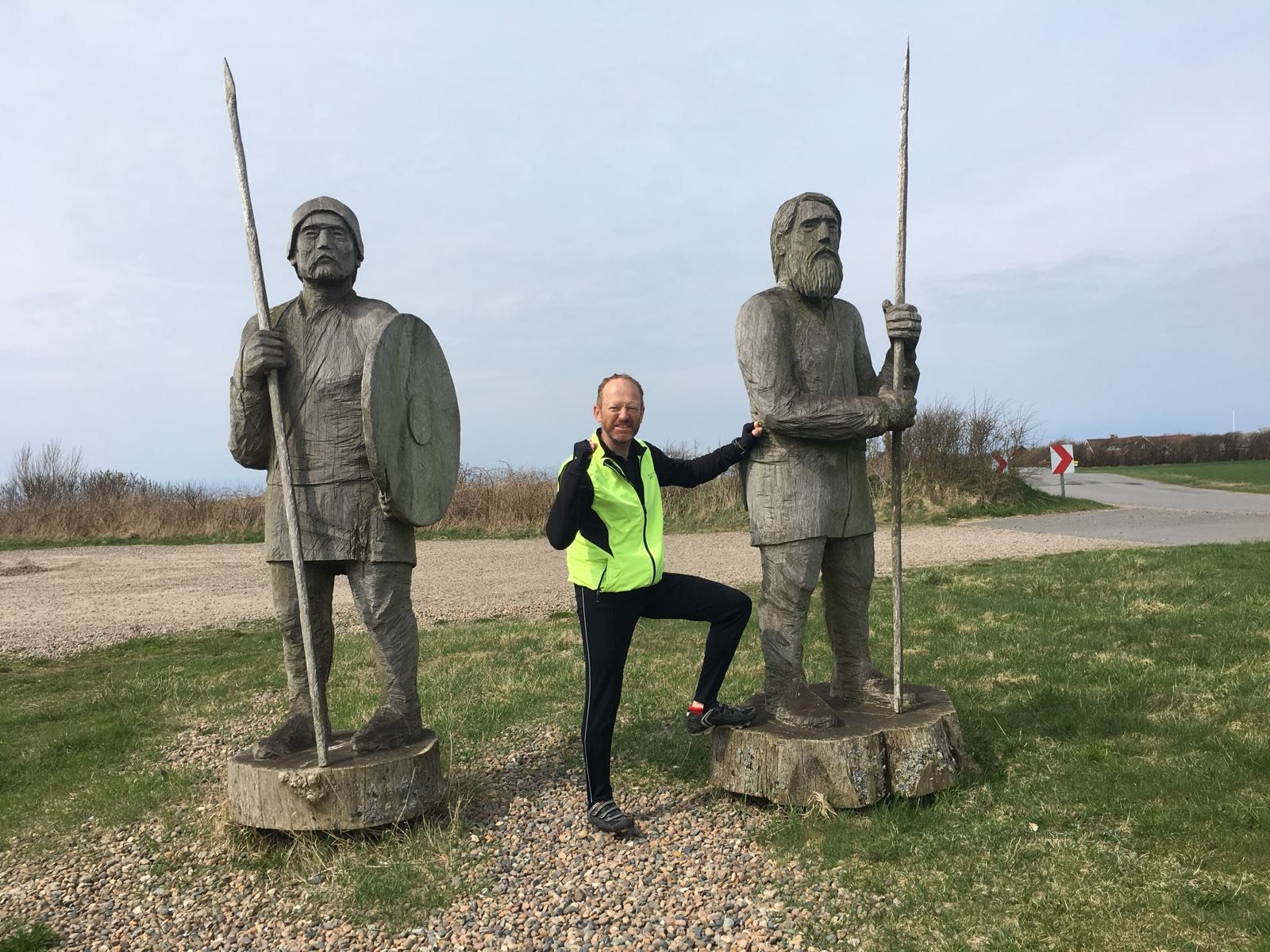 Well, no one caught us during our ‘rogue’ camping and we woke and sorted out our camp in the same way as we would have done in any other campsite – to be honest at this point if someone had told us to poke off we wouldn’t have minded as we’d already slept there and the night was done! We made no mess and left without trace apart from some flattened grass, and Martina’s puffy face, which soon de-puffed.

Yet again we stocked up with food first thing – it has become a regular occurance and even with all the food stops we’re making we are both continually hungry and can’t seem to eat enough, I suppose 6-8 hours on the go in the saddle and stopping to look at things, and lunching etc plus time either side packing and unpacking camp means we’re using a load of energy each day, which is difficult to input! Our day is punctuated by breakfast, late breakfast, early lunch, lunch, late lunch, early afternoon snack, afternoon tea….you get the gist!

Before going on with our journey here’s a couple of ‘on the road’ facts so far:

1. Ear plugs and eye masks are things of beauty – no matter what is going on outside the tent – people, dogs, dawn chorus, dawn and dusk light, etc, etc, these two things help a good nights sleep!

2. I read that other cyclists took a camp stool with them to sit on and initially thought how stupid, but oh how stupid was I? On their recommendation I bought us both a three legged folding stool each, cheap as chips (£4), light (I think that they weigh 400g) and one of the best things we have with us – don’t leave home without something to sit on! They may not last long, but I will be getting another one should they break.

4. ‘Crowd pleasers’, a phrase I have borrowed from a kayaking instructor I had in the past, are generally boiled sweets. In the kayaking domain they cheer people up when they are cold, wet and miserable and also can stop sea sickness which is not much fun in a kayak. We are getting through a lot of ‘crowd pleasers’, not because we’re cold wet and miserable, but because we like boiled sweets!

5. All campsites have a plug socket somewhere, you just need to find it! We need to charge a few things and finding a socket has become a bit of a game.  In a similar ilk most campsites have a common room and kitchen, which when you’re in a tent these double-up as areas to eat, blog, dry clothes, play crib etc.  We have definitely become opportunists – seeking out any opportunity for a bit more comfort.

On with the journey….and we headed back towards the coast.  (Check out the route on our “Where are we now?” tab on the home page). The route took us off-road initially on to deep gravel tracks, which is akin to cycling on marbles and is very energy-sapping. We climbed a bit into moorland and fir trees, which was a really nice change. 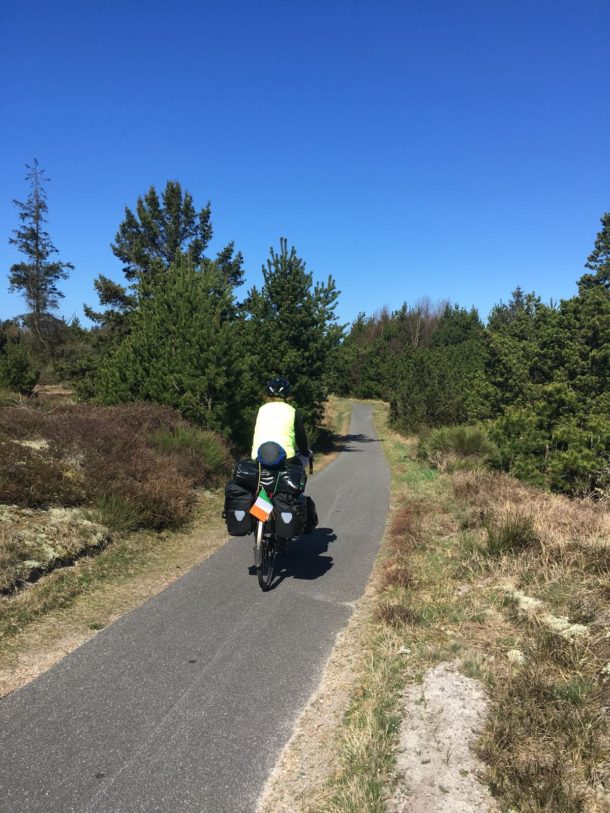 A recent fad is for Hygge, a Danish expression for a feeling of wellness, coziness and contentment. One way that the Danish get to Hygge is to escape from daily life by going to a small, but beautifully designed house (I’d like to call them chalets, but they are far more than that, many are boneafide houses) in the country. Our first experience of these was in these moorland areas where there are whole ‘estates’ of these individual buildings nestling in the trees.  It’s like a static caravan park, but with beautiful individual holiday houses in their own space.  Later we saw the same thing in the dunes near the sea – all were low built, so as not to spoil the view for each other.  There appears to be three general types – old style (though they may actually be new built) thatched cottage, very modern (think architect designed) and basic chalet (though there aren’t many of these). They are obviously expensive, but we agree that they are nicely done and if we had the dosh we’d have one! Photos doesn’t do them much justice I am afraid. 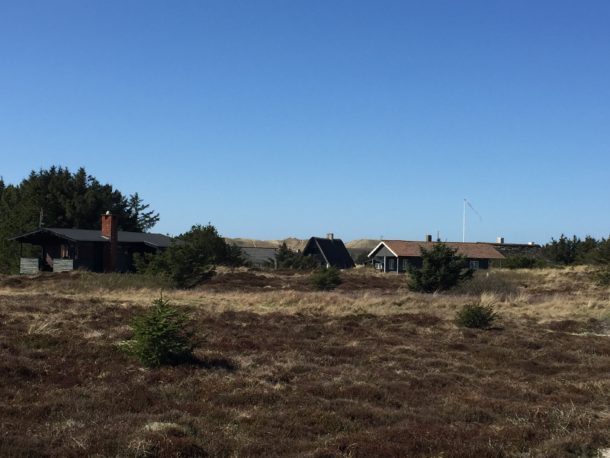 We must have passed through loads of these ‘estates’ of holiday cottages over the next couple of days. We followed fantastic bike paths for miles back towards the coast – weather was great, a few degrees cooler than the past couple of days, so great for cycling. Finally we reached the coast, crossing elevated pathways over wetlands – again a real change from what we had been used to.  The North Sea cycle path then hugs the dunes over what feels like a gravelly bmx track for miles north – North Sea on one side and the Ringkøbing Fjord on the other –  more of a wetland area than fjord and it sounds a bit  like one of the dwarves in The Hobbit!  We only knew that the North Sea was there really  because at our lunch stop at Nymindegab Strand, we climbed to the top of the massive dunes so that we could see the miles of beach spreading out in either direction. 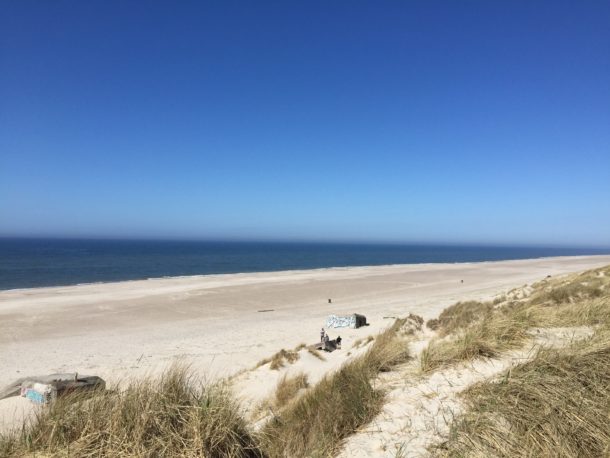 We headed across the causeway toward Sondervig, keeping to the gravelly cycle path for a while, but whoever built it had obviously never been on a bike – it was proper hard work! After a couple of hours we decided we had had enough and changed to a paved cycle track, which was perhaps not as scenic, but definitely better for the bones!

We stopped half way across the causeway at Hvinde Sande for a snack in the sunshine and watched people fishing next to the sluice gates that regulate the water level in the fjord. Seemed pretty easy fishing to be fair as the anglers were pulling in 4-5 fish at a time.

Finally, we made it to Sondervig at the northern end of the fjord and a welcome campsite – normal set- up and use of all the facilities ensued.  Martina was particularly relieved! The campsite was packed – every other place we’d stay at has been almost deserted except for us and a few others, but not here.  We heard singing during the evening, so assume that there was a gathering of some kind – needless to say they didn’t keep us awake!

Tired after a great day, perhaps one of our best cycling days so far.

The start of the next day (22nd) was very much a follow on from the afternoon before – following the sand dunes north with the North Sea to our left and wetlands to the right. Lots of wildlife around – for the twitchers out there we have seen numerous Harriers, I haven’t got a book with me, so I’m guessing their Marsh or Hen Harriers or perhaps something more exotic.

We stopped at Thorminde for a late lunch and watched more people fishing by the sleuss.  Then a quick stop at Lemvig where we came across some of my ancestors, Vikings of course, well actually Jutlanders (mainly farmers which seems about right) at one of the many burial grounds around this area – and there are thousands, think Wiltshire, Stonehenge area on steroids! 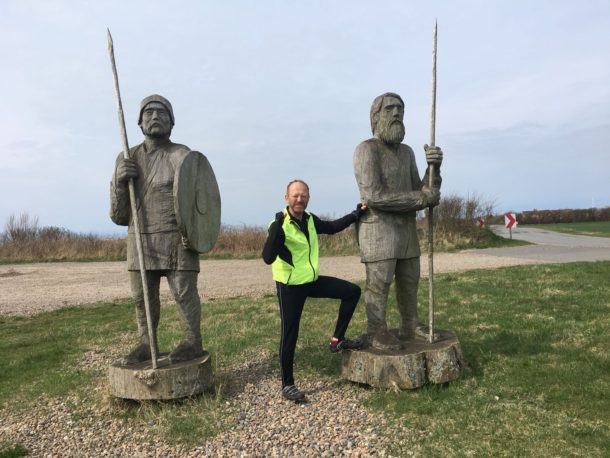 We also climbed a steep hill soon after, which gave a great 360 view of the coast and a load of the burial grounds in that area.

The last part of the day took us to Thyboron and a 20-minute ferry to Agger and a campsite and for the first time we decided to book a cabin rather than camp. This was based on the weather forecast of thunderstorms during the night, which did come, but only seemed to amount to a couple of thunder claps.  There may well have been more that we were oblivious of.  More importantly, you’d never know that two people could get so excited about what is really just a garden shed! You should have seen us, oh the luxury! 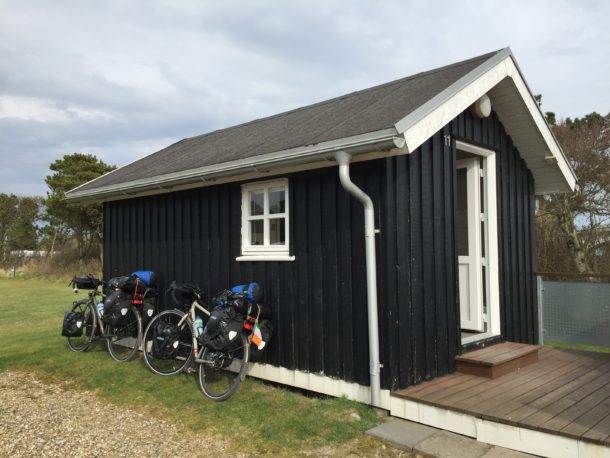 Once settled into our shed we had some much need planning to do – our rough plan is to go to Aalborg for a couple of nights (should do some more Viking things) then head north to Hirtshals and the ferry to Stavanger in Norway, again for a few days before cycling to Oslo. We have booked Air BnB for both Aalborg and Stavanger – we still have the ferry to book. After Norway we’re planning Sweden (Stockholm) the  ferry to Gdańsk. As soon as we have decided an extended itinerary we’ll publish.

I read a few travel blogs before we left just to see what other folk had taken and to glean any good tips etc. Nearly all of them somewhere along the line have a picture of their feet in them for whatever reason. Admittedly the picture is normally with a backdrop of a beautiful view or their toes are dipped in crystal clear lake/river/sea somewhere exotic. So, not wanting to be outdone I have included this picture of Martina’s feet. Yes, that is a socks and flip flops combination and no ordinary socks I hasten to add, they are Christmas socks – you just can’t quite make out the Santa on the side! Please note that you can just see one leg of the three legged stool I was on about earlier. 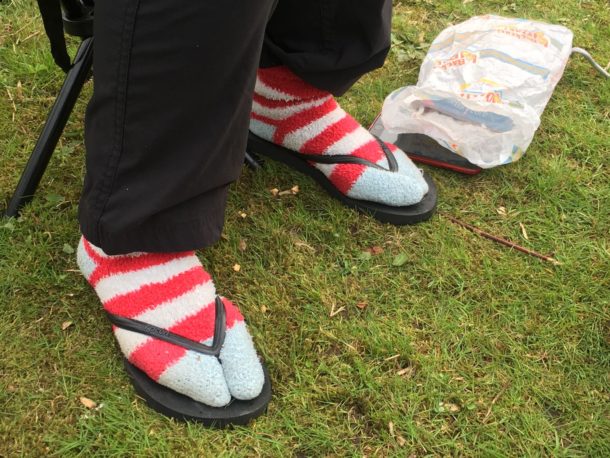