Denmark – The Kingdom of bacon and pastries apparently 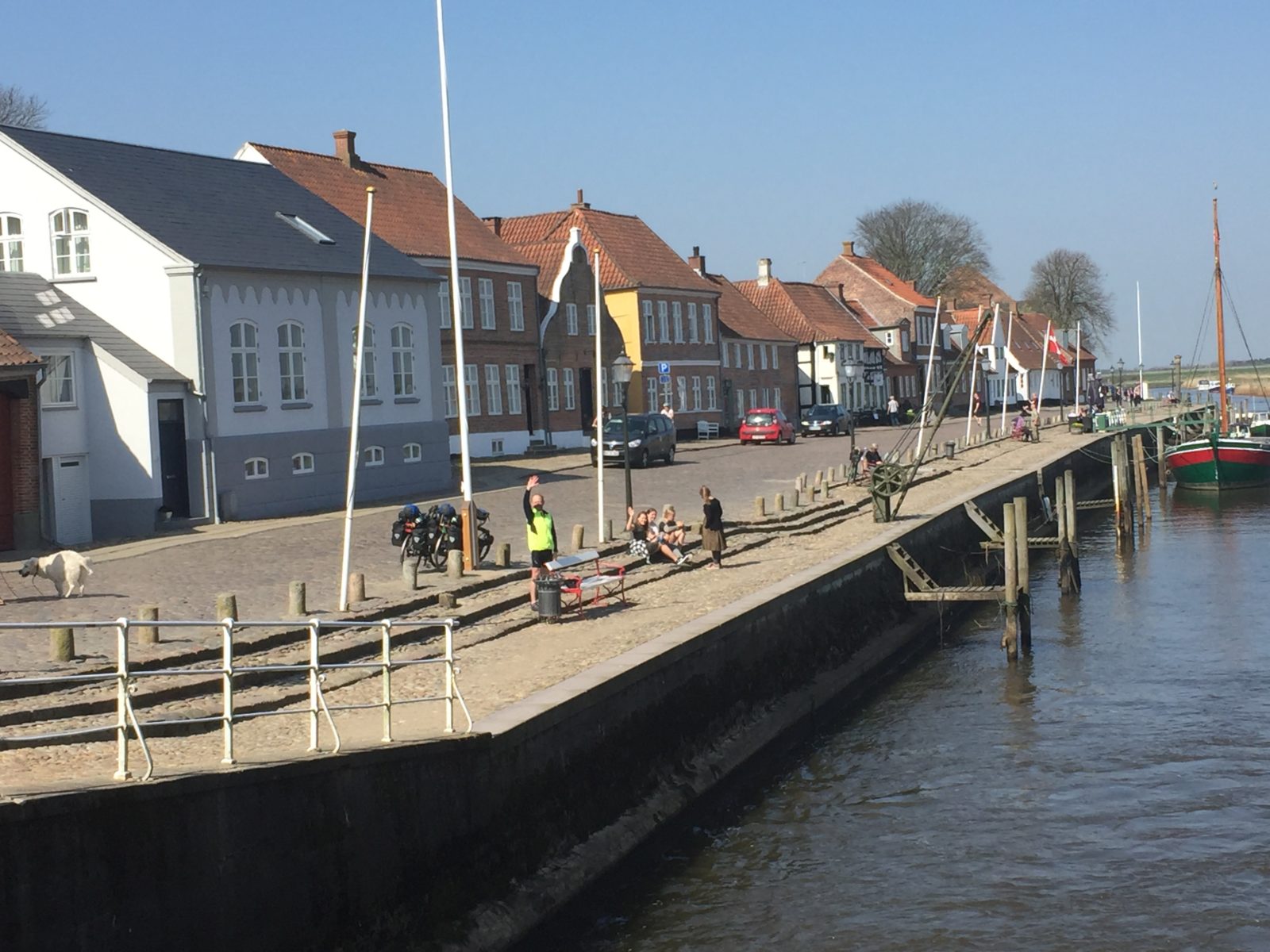 First time in Denmark for me and crossing the border was a very non-descript experience I have to say.  Mind you, we crossed at a small country road into a National Park – and only passed a small shed-like building, which we only assume was an empty border crossing post. 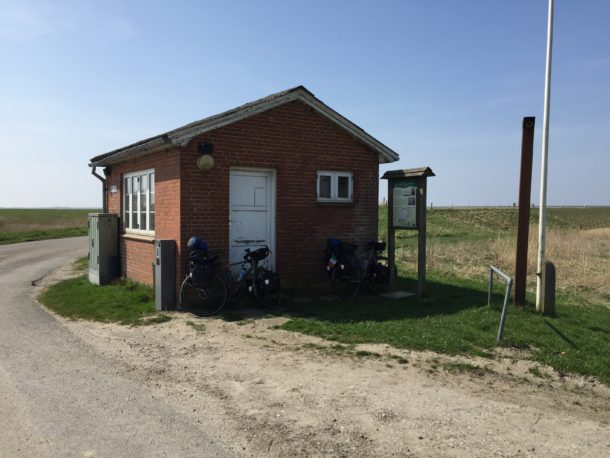 Through the national park, where we only saw a few sheep to be honest but came into a lovely little town called Hojer, where we sat and had lunch in the public gardens of a local windmill museum.  Luckily we had stocked up in Niebbull in Germany before we left, and we pretty much had the place to ourselves.  A really lovely introduction to Denmark, and we could not remember a better lunch spot on our cycling travels. 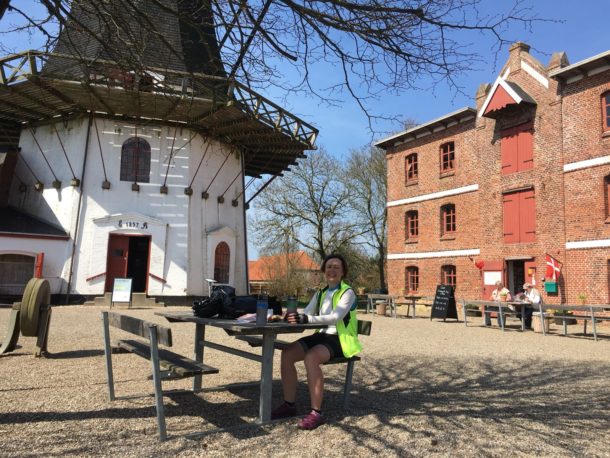 We have since realised that stocking up on supplies is our key to success in Denmark as there is the potential to get stuck where there are no facilities at the time when hunger and thirst have really kicked in.

From here we followed the North Sea Cycling Route (which we have done on-and-off since arriving in mainland Europe), which took us along the sea wall – basically a big earth-mound covered in grass, with lots of sheep – and no sea view…a continuation of what we had left in Northern Germany.  Annoyingly every 500m or so we had a very awkward gate to get through, so we were on and off the bikes all afternoon.  We had our first bike maintenance issue with a loose mudguard on my bike that needed to be secured – and unfortunately that meant taking everything off the bike to get the back wheel off! It was a boiling hot day (the heat wave had hit Denmark too, with temperatures at 25 degrees for the first time in 11 years) but apart from the heat it was pleasant enough day passing through lots of cute little villages with very white churches. 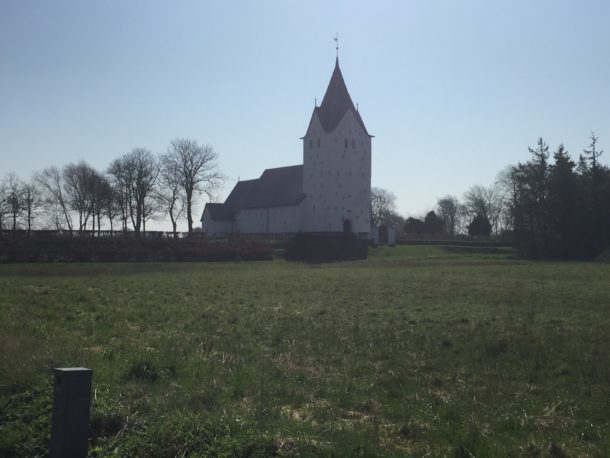 We decided to bed down on a farm campsite outside of Skaerbaek as our water supplies were running low.  A pretty non-eventful evening apart from a few loud neighbours behind our tent – but they completely failed to keep us awake as the heat of the day had completely worn us out.

Scrambled eggs from fresh farm eggs for breakfast (all 6 eggs had double yolks!), and then off on our merry way – again having ensured we were stocked up on everything we needed.  Our morning took us through forest tracks and alongside some busy roads as we headed towards Ribe – which is one of the oldest towns in Denmark – and we weren’t disappointed.  It was gorgeous, and another fantastic venue for lunch where we sat by the river eating sandwiches from the local bakery. 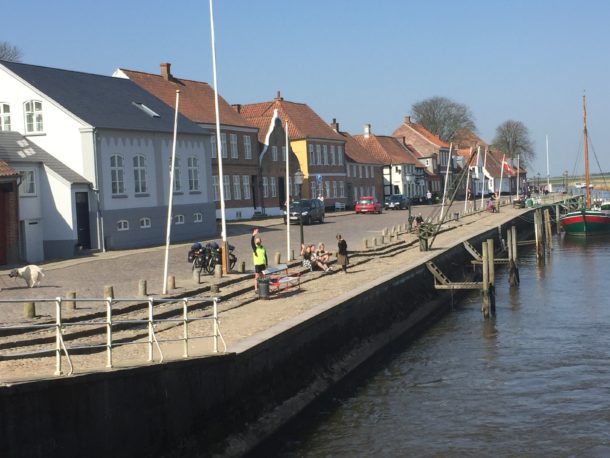 Points to note at this stage:

After our lovely lunch, we continued along the North Sea route towards Esbjerg, which really didn’t impress us.  Very industrial and apart from a few nice buildings in a central square, the rest was just any modern town centre.  Glad we had already decided to venture further, we headed further North towards Varde, which was hard cycling on a long boring flat road into a headwind.  But Varde was pretty and interestingly when heading through the centre, the busiest pub in the square was Big Ben’s English pub! Because our bikes are heavy and awkward, we don’t really have the luxury of sitting down for a beer when the mood takes us, so we soldiered on to our campsite, which was nearby, or so we thought…turns out that the first campsite on our Sat Nav was deserted and not open until 1 May – and the second one didn’t appear to exist – it looked like someone’s house and even though the back door was unlocked (yes we tried it!), there was no one home.  Oh what to do?!…we went back to the first campsite to do a bit of ‘rogue’ camping as it was quite secluded in a woodland area on the edge of town. 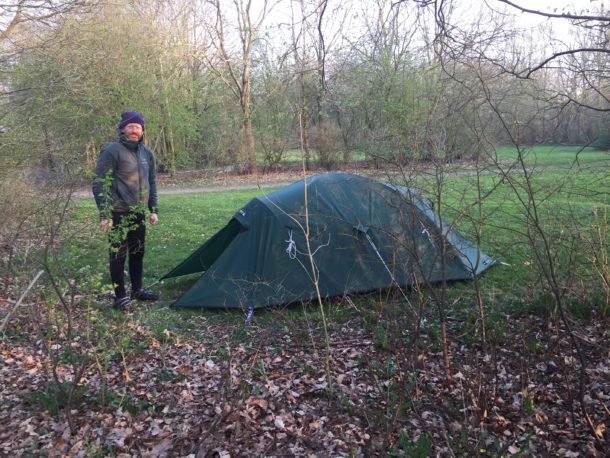 But we quickly realised there was a housing estate nearby with a dog walking path beside it – But with no real facilitie it felt like wild camping to me. No showers and what I hadn’t appreciated until now was that as well as for getting us clean at the end of a day of cycling, showers are needed to warm us up and to help our muscles relax after a day on bikes.  I made the fatal mistake here  of not getting into dry clothes as soon as we got there, so I soon got cold – which is not a happy place for me.  Dinner consisted of bread rolls and a couple of beers – we were trying to keep a low profile so didn’t want to start boiling water etc, so it was a few games of cribbage (current score 4-1 to Nigel) and a very early night. Having already been spotted by a few walkers we were hoping that we wouldn’t be arrested for trespassing – but it didn’t keep us awake for too long.  One bloke did drive around the site, wave at us and then drive off, so whether that was him say it’s okay, we never did find out! I have to say I didn’t sleep particularly well, and woke up with a face like this – probably because I had a down jacket on in bed as well as sleeping in a down sleeping bag. 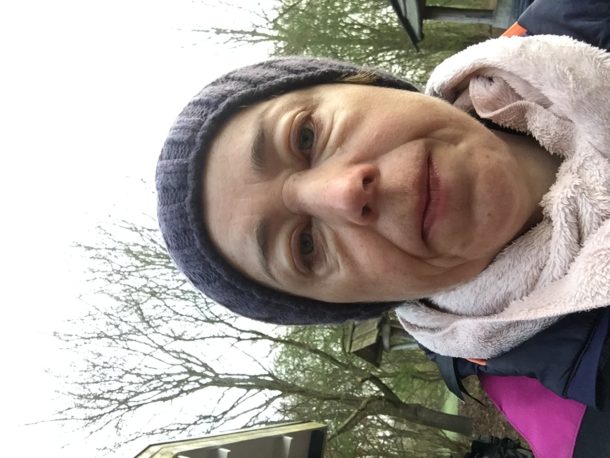 While I was busy taking selfies, Nigel had cheerfully located a water tap and an outdoor dunny.  For anyone who has not watched “I’m a Celebrity…” and doesn’t know what a dunny is, it’s an eco toilet…so although I was thrilled not to have to make like a bear in the woods it wasn’t a Danish experience that I would particularly recommend.  Saying that …I’m sure I will have to get used to a lot worse than this over the next 2 years. But I did keep myself amused pretending  I was in “I’m a Celeb…”!

Anyway, it was back on the bikes for another day.  What joys would  a new day in Denmark bring …?