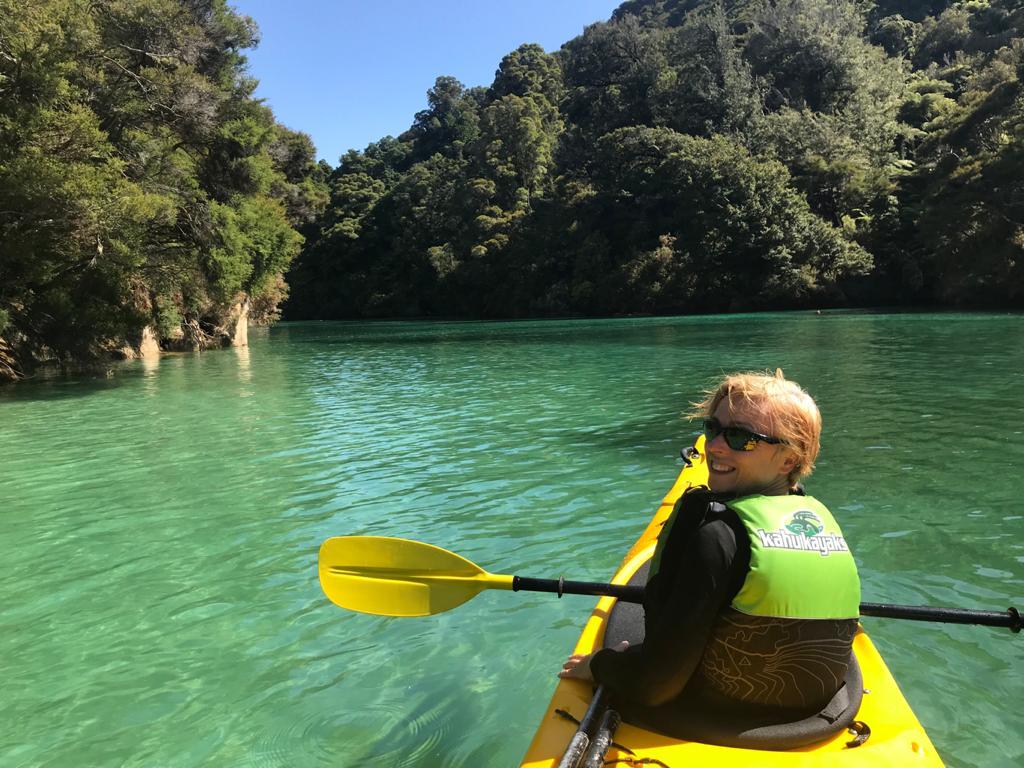 Sandfly update….the dettol and baby oil mix that I had been using to deter the sandflies has “sort of” worked as there was about a week when I had no fresh bites. But saying that it could have just been that there were no actual sandflies.  But if nothing else it definitely took the itching away…so the smell was almost worth it.

We also haven’t seen the French cycling couple since we saw them cycling towards us in our into Wanaka, although Nigel is still convinced that our paths will cross again!

We had a breakfast of fresh farm eggs and toast and when Janet left for work we stayed chatting to Terry for a while longer and had to force ourselves to leave to battle the rain and the hills.  We are on our way to Nelson now to visit a friend from Buncrana who is married with family there.  When we started our trip in April 2018, getting to Nelson seemed so far into the future….and now it’s just a matter of days! We were dressed in our rain gear but about 2 km into our journey stopped to take it off as we were sweating too much.  We managed 20km through the very picturesque Lower Buller Gorge…

..before the rain came on with a vengeance – so out came the wet gear, and that was us for the rest of the day.  It absolutely poured for the day but the rain also came with a good headwind and continual hills to make it even more challenging. At one stage it was so heavy it was stinging our eyes and it was hard to look up, so although I’m sure the scenery was lovely we didn’t see much of it.  But the sound of the crickets was almost deafening, which made for a nice distraction from the rain.

We stopped for lunch at Lyell, which had a shelter where we could stay dry to eat our sarnies while the rain continued to pour…

But the sandflies were out in force so we didn’t hang around long and just as we were heading back on the road to tackle the biggest hills of the day, the rain came on at its heaviest. It was like having a fireman’s hose fixed on us for the next hour, which made for some pretty miserable cycling.  It eased off every now and then but every time we thought we were drying out it would start up again – and basically it followed that pattern the whole way into Murchison.

We had booked a cabin at a campsite, but as we pulled into the one supermarket in town a guy asked if we had somewhere to stay…he was a WarmShowers host who lived around the corner, so offered us a place for the night. We promptly cancelled our campsite booking and followed Owen to his lovely home where we briefly met his wife, Peg, before she headed off to visit their grandchildren for the evening.  Peg is a champion Oyster Schucker, which is probably one of the most unusual career choices of all the Warm Showers hosts we have stayed with!!

We got ourselves settled and had a lovely dinner.  Owen was on-call for emergencies on the electricity grid and just after dinner got called out to work so we were left home alone with a chocolate cake and ice cream! In our conversation over dinner he mentioned that he and Peg were having a week away in North Island and that we were welcome to stay and use their house.  Our timings don’t work, but seriously what a random and lucky act of fate to meet Owen when we did, and what generous hospitality!  We didn’t see Owen for the rest of the evening unfortunately but a neighbour popped in so we had a lovely chat with her and then took ourselves off to bed!

I forgot to set the alarm last night and we were obviously so comfortable in bed that we didn’t wake until 7.15. Despite not getting back from work until 1am Owen was already up so we had a lovely chat over breakfast.

We finally set off shortly after 8am – and it wasn’t raining, hurrah! We were straight into a gradual climb and although we were on more of a main road than yesterday it wasn’t too busy…..with the exception of a few drivers that got WAY too close as well as the huge logging trucks that almost always got too close! We had lovely green lush forest for scenery and the rain held off so it was quite a nice ride.  Just over the half-way mark we had one huge hill, Hope Saddle, to get over, but the views in the picnic area at the top where we had lunch were well worth it…

…and then it was downhill in the sunshine all the way to Quinneys Bush Camp where we had booked a caravan for the night.  We could easily have camped, but the weather forecast had given showers for the day so we didn’t want to take a chance on getting an overnight drenching.  But the sun stayed out and it was quite warm so we took the opportunity to dry everything off that had been slowly starting to ferment in our bags over the last few days and chill out in our cute little caravan.

Although it feels like we have had a lot of rain over the last 10 days the southern part of South Island has had it much worse.  Milford Sound where we visited on January 17 has been completely closed off because flooding has washed the roads away and loads of tourists were stranded for a day or two awaiting rescue.  The residents of Gore, another place we visited and camped on the horse show grounds in the town centre, were evacuated because the Mataura river had burst its banks. And an area of the highway where we cycled through only a few weeks ago was closed because of flooding and land slides. The area got 1 metre of rain in 60 hours! So while we were initially feeling sorry for ourselves we think we got off pretty lightly here and are lucky that our timings meant we could see the wonderful west coast when we did and that we were much further north before the storms hit.

Woke like an excited child to brilliant sunshine and it didn’t take us long to get out on the road.  We had one big hill to climb at the start of our day that was a lot easier than we had anticipated and gave us great views to the surrounding area of Nelson.

Then is was an easy downhill ride into Wakfield where we stopped for tea and cake….

….before heading into Nelson.  It was easy riding the whole way in and we passed lots of vineyards and hops farms, so it’s obviously the place of wine and beer.  It was also so nice to cycle in the sunshine after all the rain we’d had on the west coast.  We joined a cycle track on the outskirts of Nelson that took us via a coast road, which was just gorgeous. Fantastic views of the sea and the harbour and it also meant we could avoid a big hill.

We arrived at Louise and Dee’s around 11.30 am to big hugs, introductions to the kids Stella and Thomas that we had never met before, followed by lots cups of tea chatting and laughing.

Later in the afternoon we went to visit a local heritage village that had excellent beer and a playground so it catered for all of us and then it was back to base for dinner and a relaxing evening.

Today was Waitangi Day, New Zealand’s National Day, which commemorates the signing of the treaty between the Maoris and the British Crown, which secured British Sovereignty over the islands of New Zealand and is regarded as New Zealand’s founding document. It’s not celebrated much in South Island other then as a public holiday-  but it meant Dee was off work and the kids off school so our timing was perfect!

Almost a full week off the bikes in Nelson with a bit of sea-kayaking in between which we both really wanted and needed.  Nelson is a small but lovely city and is the first place in New Zealand so far that we have both said we could live. It is has a unique setting in the bowl of a valley surrounded by hills and the sea…..

…and a really nice chilled out city centre…

We visited Rabbit island, which is a fantastic local beach and had a few hours of house-building from driftwood…..

…..and our first Kiwi Barbeque. The rest of our stay followed the same pattern…Tahuna beach, barbecues and and home-made food, courtesy of the Buckley family….

We also visited the Centre of New Zealand, the origin point of the Nelson Land District (for land surveying), and Princess Drive lookout, which both gave great views over the city.

And Queen’s Gardens, the Victorian Gardens in the centre, reminded us both of Regents Park in London.

Nelson is famed for being the sunshine capital of New Zealand, which was a lovely change after our wet spell along the west coast. And it’s also home to the very first rugby club in New Zealand, which for a rugby mad nation is quite an accolade.  Overall it was a great place to put down roots for a while – especially with the hospitality we received from the Buckley family!

We took two days away from the city to visit Abel Tasman National Park, one of the top National Parks in the country.  And it’s only an hour away by Car.  We opted to sea kayak along the coastline to get a different perspective of the coast and it was fantastic.  It was my first time to kayak and I really enjoyed it…..

….even through it obviously wore me out!

The scenery and colours were fantastic but we had expected to sea more wildlife than we did, so on that score it was slightly disappointing.  But we did see loads of seals sunbathing as well as swimming quite close to the kayak, which was really cool…

The kayaking expedition involved one night of camping, and because packing for kayaks was so different to packing bikes we forgot our tent poles.  Doh!  But I didn’t need worry because I just knew that Nigel would figure something out ….and he did.  Even Bear Grylls would be proud of this effort….

All in all what a fantastic week in Nelson and Abel Tasman – and feeling rested and relaxed to get back on the road!