Who knew that carbonated water can come straight from the ground? 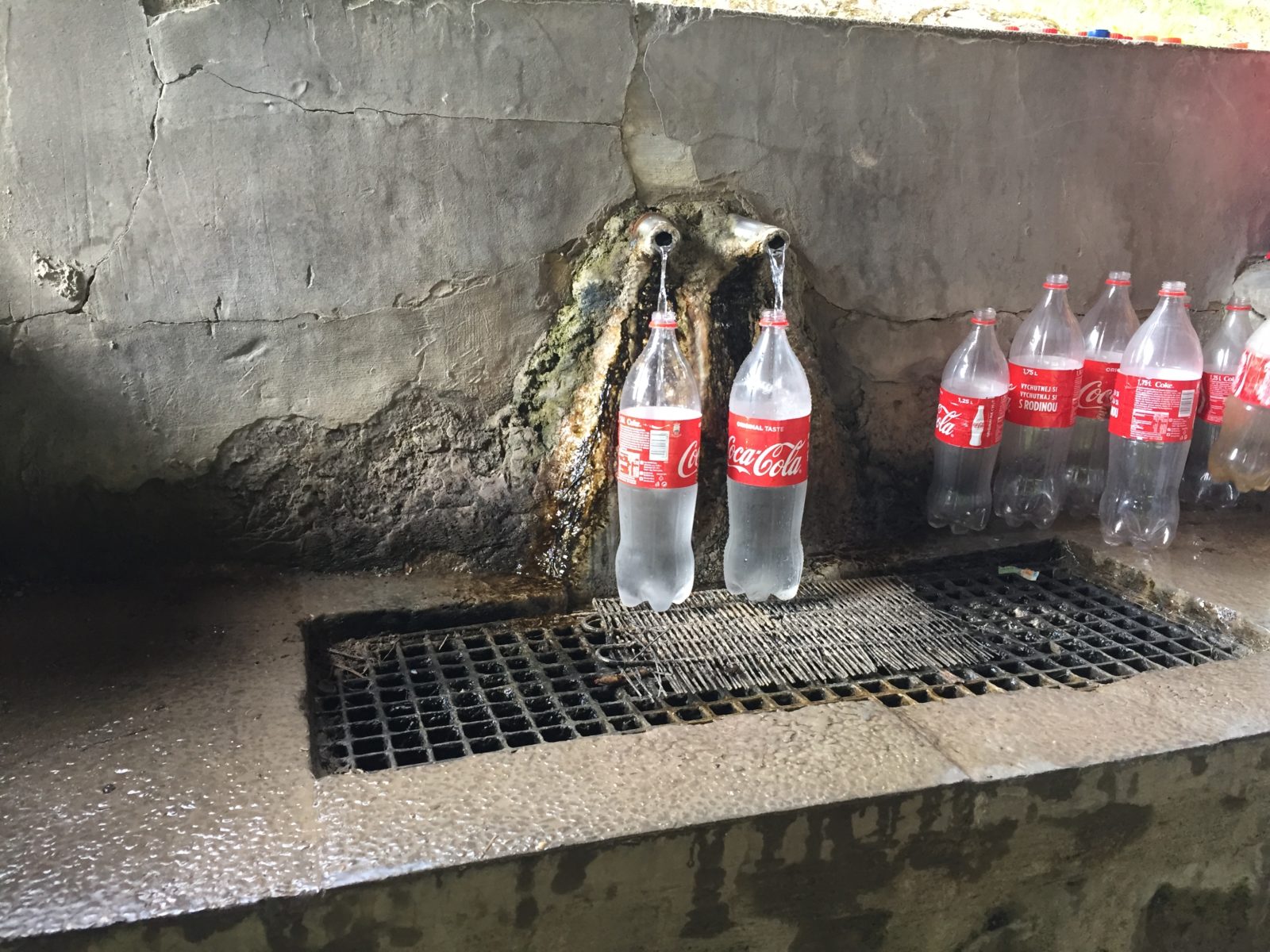 Our journey today started by backtracking on Route 66 as far as Telgart, but to be honest, even with the massive hills, we didn’t mind too much because the scenery is so spectacular.  And it meant we got to see what we felt we missed on Sunday when we were bombing along to beat the storm.  We even filled our water bottles at the same Hron spring on the way past.

We turned off at Telgart and we were into the Ore Mountains….it’s hard to explain as it’s still more mountains but they were very different from what we have already seen – craggier and much nearer to us – and spectacular in a different way. 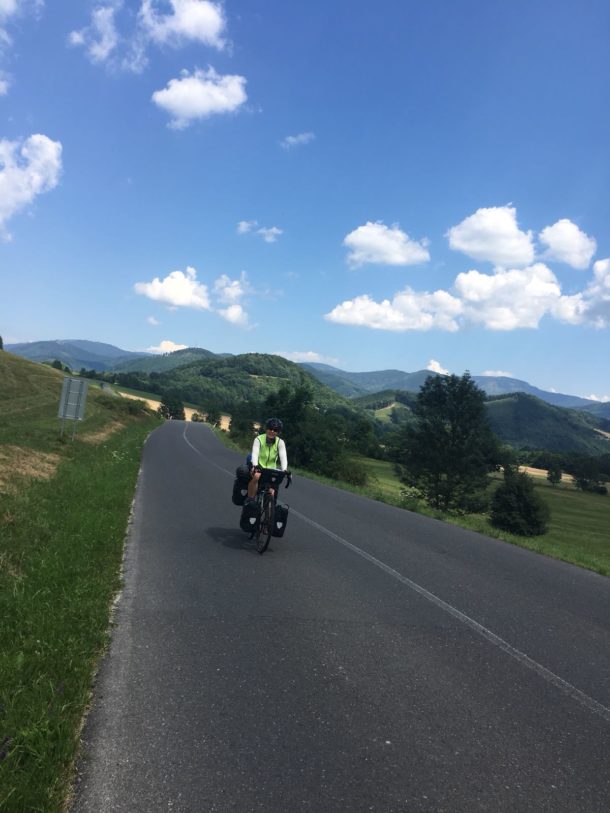 There was fair bit of climbing involved that was reminiscent of Norway (as well as sweating and puffing and panting from me!),  but the steep descent here was quite a bit longer than the climb and I am grateful that we had our brakes serviced recently as it got a bit scary! We were also both glad that we were riding down rather than up as that would have absolutely killed us.

Our planned destination for today was Muran, and we reached there at 1pm.  A small pretty village, with not much there apart from a great bakery….horrah – cake watch is back!! I smelled it when we turned the corner so it was my first stop, while Nigel sat in the bus stop getting set up for lunch.  They had 2 choices of “filled buns”, which apparently is their speciality.  One was cheese, which we expected to be savoury, but it tasted like vanilla custard.  The other was blueberry, which we both preferred – but regardless, it was a different type of lunch from the norm. 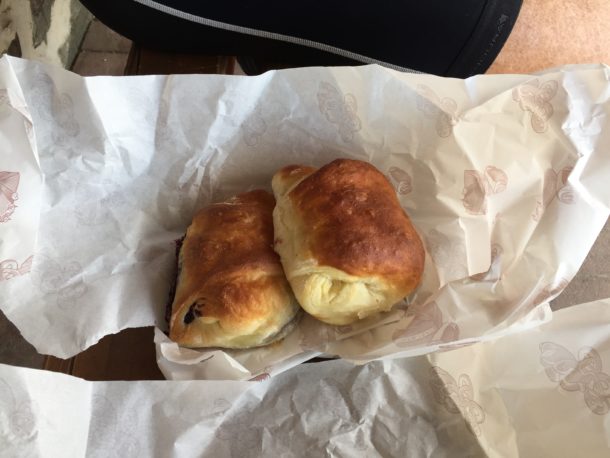 Despite feeling a bit tired with the hill-climbing we decided to venture further,  as accommodation and camping options seemed pretty scant in Muran. There were some hills to conquer but not on the same scale as in the morning.

We were running low in water and Nigel spotted another well as we were coming into Tisovec. This one had quite a few cars, with what looked to be locals filling up loads of old plastic water bottles.  We duly filled ours and when we tasted them, realised that it was carbonated –  ice cold sparkling water straight from the hills. Who knew that existed?! And very nice it was too! 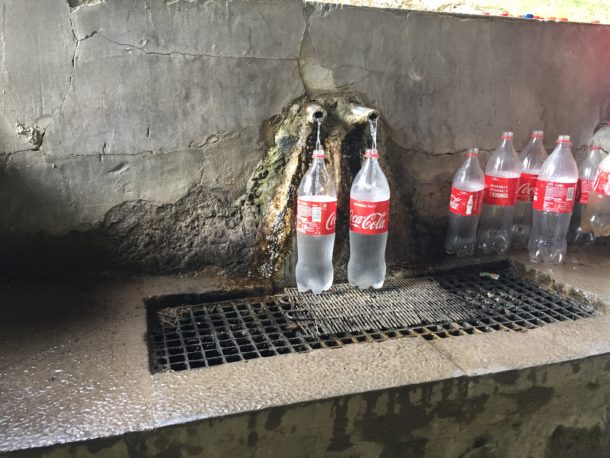 And while we were sitting chilling out watching the crowds fill up I had a conversation in German with a lovely little old Slovak man who was holidaying in the region, asking all about where we had been to and what we had seen in Slovakia.  One thing he did say is that middle Slovakia where we have been, isn’t particularly touristy…tourists tend to visit Bratislava and the High Tatras…which might explain why there aren’t many camping facilities around.  A bit of Googling and we found accommodation about 12km further down the road in a little town called Hnusta. We were greeted by the home owner and her nephew Hardik, a 20-something Indian guy from Gujarat, who then got into conversation with Nigel as I was shown to our rooms.  He loves cooking, but the Slovaks find Indian food too spicy so he gave us some spicy rice/biryani to try.  It was amazing and when he saw we were fans he offered to cook our evening meal for us.  Fantastic food – and cyclist portions! 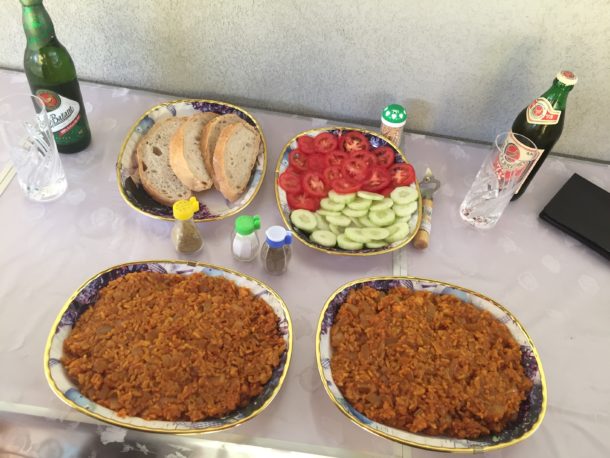 Chatting to our host after dinner, we asked her about the refugees we had seen.  Apparently they aren’t refugees, but Roma gypsies.  Slovakia hasn’t taken any refugees permanently it seems (because they don’t provide them with benefits), but there are lots of gypsies in the hills – and her advice was not to get into conversation with them and they will generally leave you alone.

Thursday morning up and out at usual time with a decision not to go too far today as yesterday had been hard.  The big hills were done so we were on pretty flat road, which felt very easy. Stopped for a coffee in Rimavska Sobota and found a very happening little coffee place in the square with lots of ladies drinking cocktails and all sorts at  11.30am.  Great people-watching for an hour in the sun! 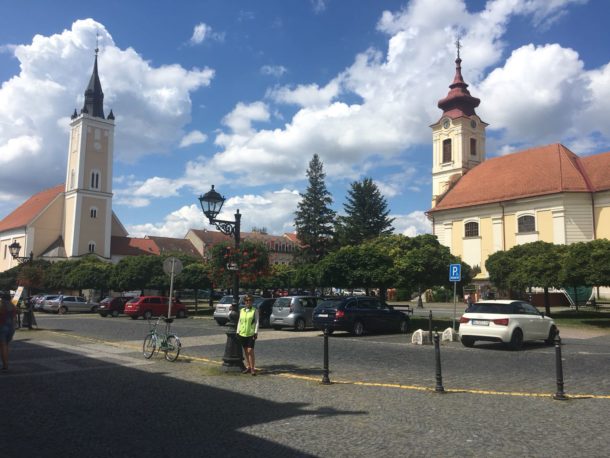 Decided that we would venture on a bit further and cross the border into Hungary and then find a bed for the night, so our last stop would be a place called Ciz, just on the border. On our way there hunger had set in as we passed through another village so we considered stopping for lunch there but there were loads of Roma gypsies hanging about and we felt a bit conspicuous and uneasy so we pushed on to Ciz. There was absolutely nothing there, but we found a couple of park benches for lunch and asked a couple who were on their balcony nearby for some water as the temperature had crept up and we were guzzling water! I had no phone signal there to look at our route properly on Google, so once we got going again we pulled into a lay-by next to a cemetery when I got a signal.  Oh dear….what a mistake that was.  A very drunk/stoned/off-his-head-on-something guy got out of the drivers side of a parked car and started talking to us to try to help.   He could barely stand up straight and his English wasn’t great so it was quite painful trying to be polite when we really just want to tell him to p**s off.  When we said we had come from London he said he worked in London.  So Nigel asked “What part of London?” and his answer was “nothing”, so you get the idea! As he started to light up a cigarette he was obviously in for a natter, so we made our escape.  And then the next place we stopped had no phone signal so we couldn’t check the map there.  Grrrrr!

Anyway, all good things must come to an end and our time in Slovakia is done.  We crossed into Hungary around 3pm through Banreve, and straight into more stunning scenery.  Country 11 on our trip…what adventures will this bring?!