Getting our kicks on (Slovakia’s) Route 66 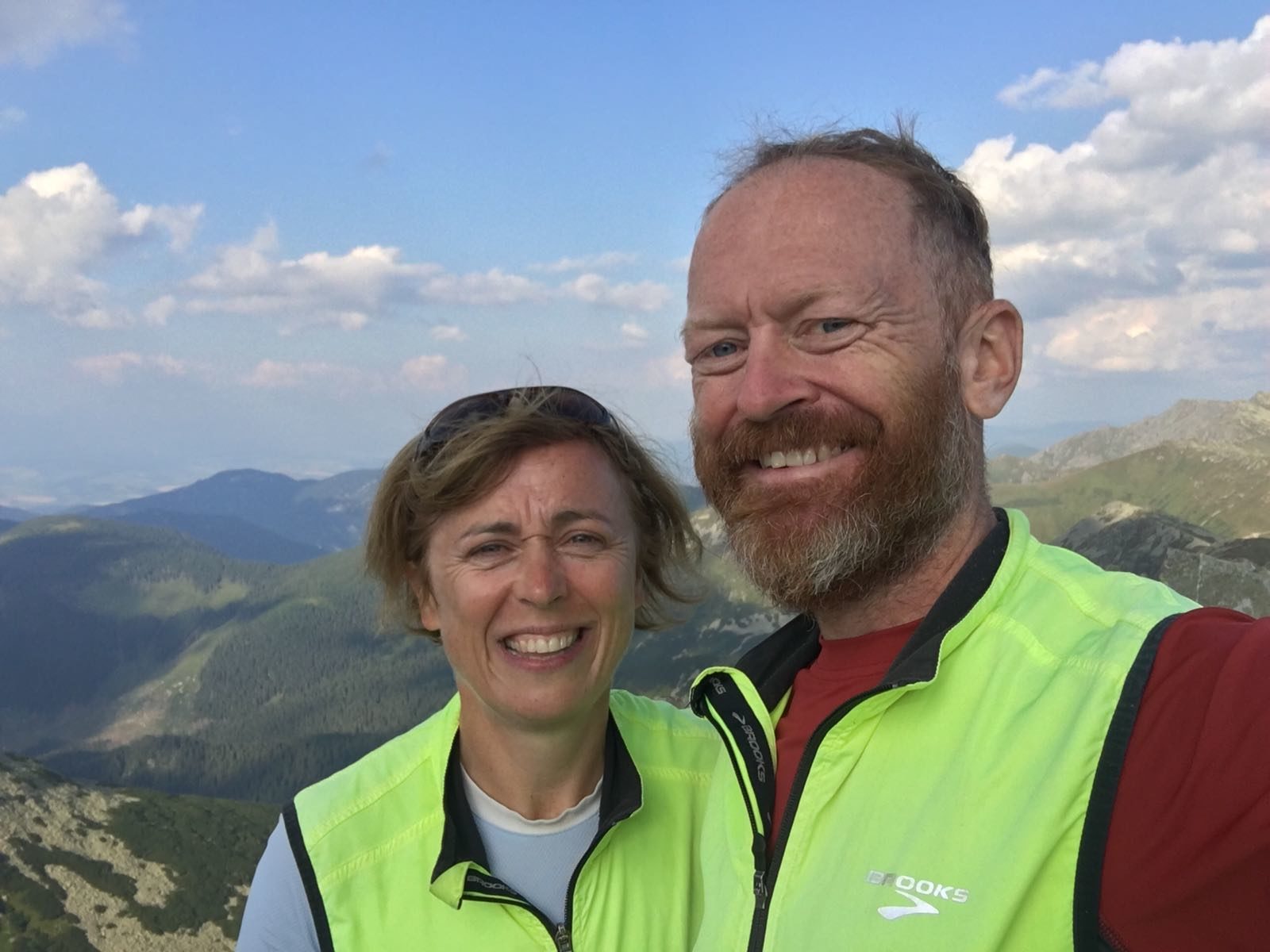 So after a fantastic breakfast with the Mazanec family we headed off towards the hills. Despite only having met them 36 hours ago we were quite sad to leave, but all good things must come to an end – and they had given us plenty of advice and recommendations on places to visit for the remainder of our time in Slovakia. Today we were heading towards Chopok, the highest peak in the Low Tatra Mountains, on Route 66.  For the first part of of the morning we were actually on a small bit of busy motorway, which was a bit hairy – but generally it was a nice ride in rolling hills through little villages. Of course it wasn’t going to stay like this as we were heading for a mountain peak, so lunch was really a fuel stop at the side of the road before the climbing began. At the start it was fairly gradual but never-ending, but it was alongside a river so it was really pretty.

About 11km from the peak we decided to start looking for accommodation so that we could dump our stuff off and then cycle luggage-free on the big hills. It wasn’t the best of ideas as all the accommodation was full and we just ended up wasting time knocking on doors to be no nearer our destination. We even stopped at the local tourist information but the girl there seemed to know next-to-nothing about accommodation, so we ventured on in the mindset that we would probably wild camp. However 5km into the 11km climb we saw a hostel that also had camping facilities – hurrah we were saved! We considered setting up camp, having a lazy afternoon and leaving the final ascent until the morning, but when we checked the weather there was a 70% chance of rain in the morning, which meant 100% chance of seeing nothing from the top. So we opted to kill the camping idea, go for a room, dump our stuff and go to the top. A mighty fine plan as the last part of the climb was a killer, which wasn’t surprising as we were 1213m above sea level. From here we would have to get a cable car to the summit, but it was now 16:23 and the cable car closed at 16:00 ……dagnabit!  On closer inspection however we realised we had come to the wrong point – this was a chair lift that was closed in summer, so we had come too far up the hill…but the scenery was stunning so it was hardly a wasted journey!

Back down to find the cable car, which after a short descent meant climbing back up a different road.  We thought about just abandoning the idea completely as we assumed that would be closed as well – but decided we had come too far to give up. And luckily we got there with everything still open and enough time to give us about 40 minutes at the summit – absolutely worth all the effort to see the views of the Low Tatras and some distant glimpses of the High Tatras despite a bit of haze. 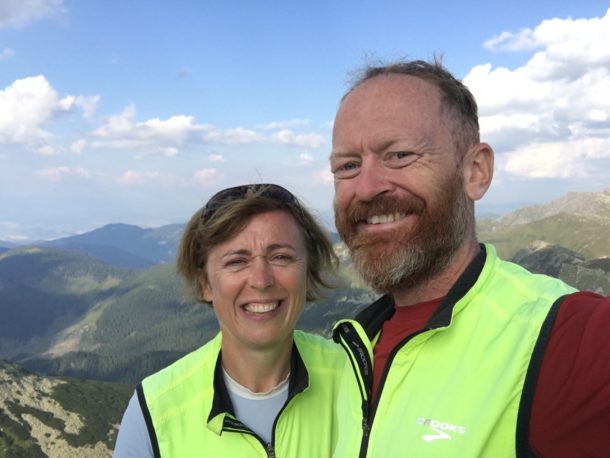 And the timing was perfect because just as we were starting to get a bit chilly, it was time to get the last car down the mountain. The cycle down the hill was an exhilarating 40km per hour ride to our accommodation, which took us about 10 minutes! Back to base it was time for a shower, food and a few beers before bedtime.

Sunday morning the first 10km was all downhill so it was one of our easiest starts and the forecasted rain didn’t appear.  Our plan for today was to go to Dedinky, in Slovak Paradise National Park for a day of hiking near the lake. Route 66 (with many references to the more famous American road) took us along the southern edge of the Low Tatras, which was all rolling hills towards Brezno, where we stopped for a coffee.  A very friendly local and his young son thought we were lost and tried to help with directing us somewhere they thought we should go. With no common language between us it took a while to communicate that we just wanted a coffee stop but it was very endearing, especially when they both started taking pictures of our bikes while we had our coffee break – and they waved us off as we were leaving town.

About 15km out of Brezno while we were chatting and pedalling up some gradual hills, I casually asked Nigel “when did we change from Route 66 to 72?” …oh dear….that wasn’t in the plan!  We had come out of Brezno completely on the wrong road and there was nothing else for it except to turn back…So at 1.30 we were exactly where we had been at 11.30, except a tad more tired.  A bus stop lunch (again!) and then it was back on Route 66 in our sweat gear, as unfortunately the sunshine had turned to rain. We knew we weren’t going to make to Dedinky at this stage so decided that Telgárt would be our stop for the night.  We battled some torrential rain as we came towards Slovak Paradise and a couple of huge thunder claps and big dark clouds to our left (around the summit of Kravola Hola) meant that the mother-of-all-storms was coming our way, so we pedalled as fast as we could to try to beat the storm, while trying to take in the stunning scenery.  We had no accommodation booked for the night, so we were travelling on a wing and a prayer…but the prayers obviously worked as the first B&B we tried had a room and we were in and dry just as the storm broke.  What a result!! And the accommodation was really good as well, which was a bonus. And boy did it rain!

Woke to glorious sunshine with a bit of wind and headed out straight into a tough old hill climb to wake us up on a Monday morning. About 2km up the hill we saw a sign to the Hron River spring, which was a small wooden hut that covered where the river Hron springs out of the ground, and eventually makes its way to the Danube. We filled up our water bottles with the fresh spring water… 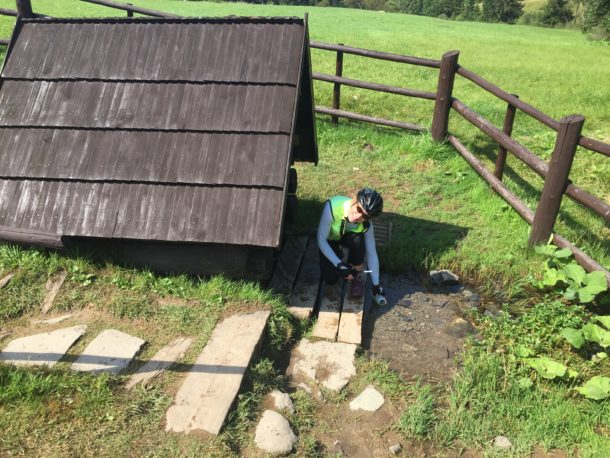 …and continued the grind for another 8km to some stunning views over the hills.

We had done some research last night into the hiking options in Slovak Paradise and had changed our minds about going to Dedinky , opting to go north instead, where the more popular hikes and gorge scrambles start.   Google maps had indicated that our end destination was 50km away, but it was only about 25km, so once we had come out of the hills, we were nearly there.  But it was only 11.30am, so we decided to venture into Poprad for lunch as it was the only big town in the vicinity, and it was only 8km away.  Another hill climb on a busy road, which wasn’t great but one huge advantage – we got our first proper views of the High Tatras – big imposing mountains as we came into the town.  Had we gone to Dedinky as planned we would have completely missed out on this! Roadworks made it a bit difficult getting into the centre of town, but once there it was a pretty little place – and we easily found a Denne menu, which left us completely stuffed.  A bit of a struggle getting back on the bikes to be honest, with a quick detour to the supermarket…which had this view from the car park. 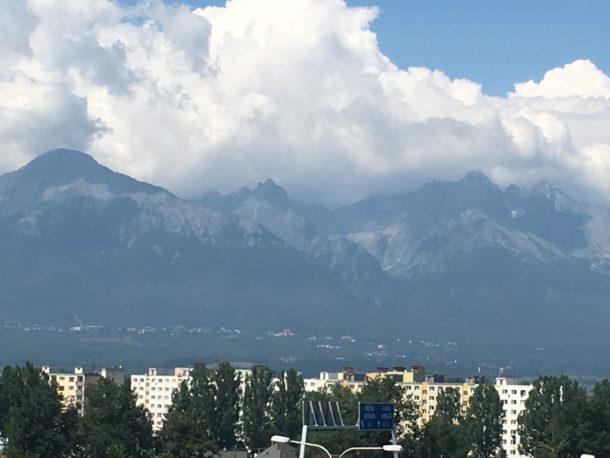 The final leg for the day took us through more beautiful hills and we made it to our very basic accommodation in the small rural village of Spissky Stiavnic – in time for an afternoon snooze.  What the accommodation lacked in facilities, the owner made up for in helpfulness and friendliness – and when he saw we were on bikes gave us a room that had washing machine in the bathroom…he obviously thought we needed it! After our big lunch we didn’t need much of a dinner, so we headed out to the local pub for a drink before bedtime; an interesting place with some eclectic decor. 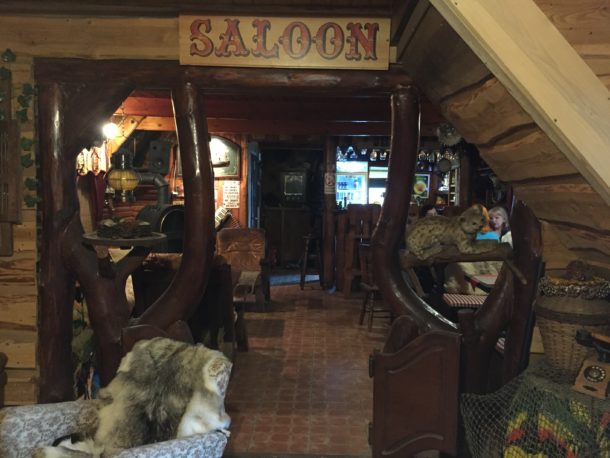 All-in-all, a really lovely relaxing day…I can definitely think of worse ways to spend a Monday!

One thing that we came across in the last couple of days for the first time on our travels was refugee camps.  They looked like rundown shanty towns in the mountains full of refugees – probably from Afghanistan and/or Syria at a guess. We didn’t particularly remark on the first ones we saw, other than the quality of the accommodation, which was pretty awful, and that the residents didn’t look like Slovaks.  The last one however was just outside Telgárt, just beside our accommodation.  When we arrived in the village there were at least 50 men, women, teenagers and younger children on both sides of the roads trying to sell buckets of wild fruit and mushrooms to passing traffic. It was quite intimidating as they were blocking both sides of the road and we had to cycle through them to get in the gate to our accommodation, but being on bikes they weren’t too focused on us, which was a bit of a relief. But it’s hard not to feel hugely sorry for them – stuck up here in the hills with nothing to do in a country where they don’t speak the language.  When the rain started a lot of them left, but one man stayed on in the absolute hammering rain, still trying to flog his fruit. It does make you wonder what will become of them, especially if they are still here in the winter, which I imagine is not an easy environment for anyone. We talked a lot about this and can’t imagine what the host country is thinking when they put refugees in remote areas like this, where there is no industry or even a town.  Telgárt is no more than a large tourist village. Similar situations have also happened in the UK where refugees have been placed on remote islands off the west coast of Scotland, so it’s not purely a Slovak problem, but a bit of a sobering end to our day I can tell you.