The best of Cambodia….in hospitality and temples! 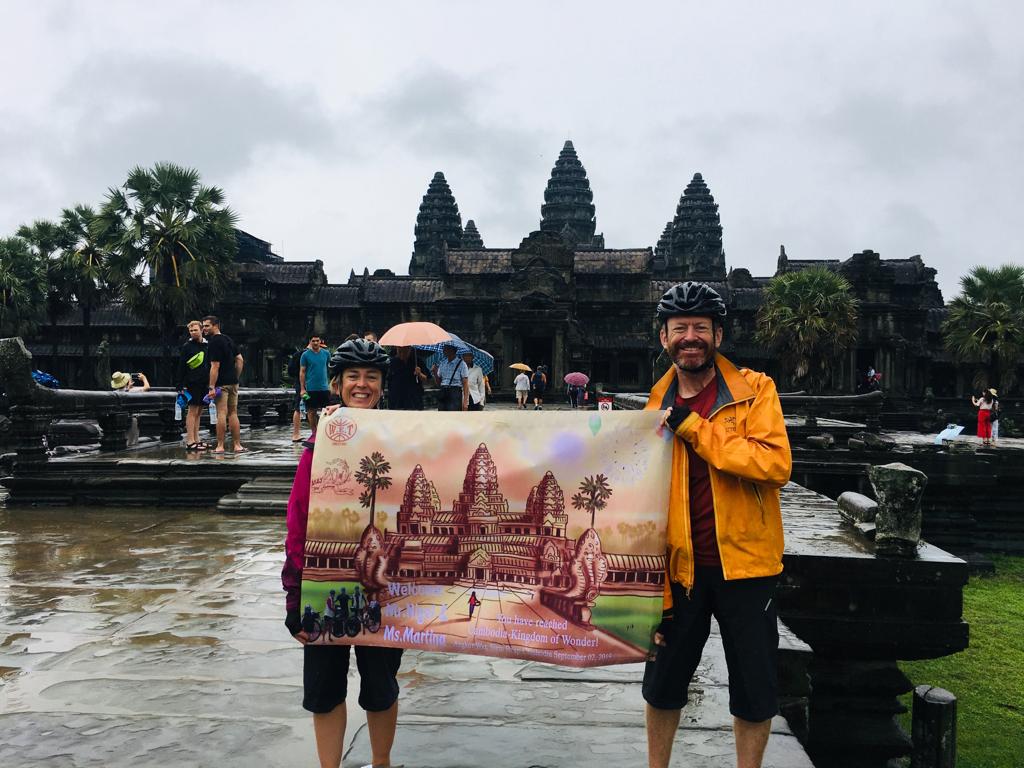 We were picked up by Pisith at 6.30am to collect our tickets for the Angkor Wat temple complex, which as Nigel mentioned yesterday were sponsored by one of Pisith’s friends (Mr Ho Vandy) – which at $62 a ticket was such a generous gift.  We returned to the hotel to pick up our bikes and stuff our faces with the best breakfast of our trip before heading off in the rain to discover the delights of Angkor Wat.

It is the most celebrated of Cambodia’s monuments and is represented on their flag and their money. Interesting factoid of the day is that it is one of only two countries in the world, along with Afghanistan, to show a building on its national flag. Angkor Wat is also the largest religious monument in the world, set in a site comparable in size to Singapore. It was originally built as a Hindu temple dedicated to the god Vishnu, but towards the end of the 12th century it was transformed to a Buddhist temple, where many Cambodians still come to worship. As well as amazing architecture it’s surrounded by lovely woodland and a moat, with lots of other “less popular” temples nearby.

Despite the rain and and the fact that it’s low season there were loads of other tourists, but we did spend a lovely few hours exploring with an audio guide whilst taking it all in. As well as its imposing towers the entire complex is covered in intricate carvings that tell the story of Vishnu which, although was hard to follow at times, were just beautiful to see.

The procession of tourists there was a good reminder of how lucky we were to get our first glimpse of it last night when it was tourist-free!  The rain came on pretty heavily around midday so we decided to call it a day and head back to the hotel….not before meeting a friendly and funny English guy called Wade and his wife Diane who were taking the mick out of the hoards of selfie-takers who spent more time posing for photos than looking at what was in front of them!

In the early evening we headed to dinner with Seyha, the WarmShowers host who we hadn’t connected with yesterday because of a breakdown in communications.  Seyha is a pastor of the Seven Adventist Evangelical Church in Siem Reap, so we had a lovely few hours with him and his family over a home-cooked dinner talking cycling, God and everything in between!

We got back to the hotel quite early and decided to make use of the bar, as dinner had been a dry affair. Over a few beers got into a lovely conversation with Sokim, one of the young bar tenders working there, who told us about his life growing up as a country boy and then moving to the city.

He told us that his grandfather had been killed by the Khmer Rouge, his grandmother died because they didn’t have enough money to pay for an operation that she needed, and he talked about when he was a cow boy ie his parents had a cow and as the youngest in the family how it was his job, after morning lessons, to look after it. He mentioned that when the cow got lost how scared he was to go into the jungle alone to look for it.  In the afternoons he would go fishing for food for the family, catching frogs beforehand as fish bait.  He was beaming with pride at how well he is now doing in his hotel job and how, when we goes back to visit his family, the other villagers comment on how his skin has changed….he’s not in the sun as much so his skin is not as dark as it used to be when he lived there, which is sure sign of having a good job in Cambodia!  I had to leave the table at one stage to go to the toilet to bawl my eyes out ….hence puffy eyes in the photo, but what a fantastic heartwarming story to hear firsthand about how well a young Cambodian can succeed in life.  His  older brothers and sisters are equally as successful.  He plans to own his own hotel some day and he said that when he does we can come and stay for free!

Pisith arrived in the morning to deliver a banner that he had printed…mainly as a publicity prop for some photos for him, but also for us to keep as a souvenir. Considering how much hospitality he has shown us we didn’t mind being sent on a mission to get a photo with the banner at Angkor Wat, as we had planned to return to see other temples anyway.  So we set off on our bikes in the rain yet again.  Mission accomplished ….

…we then set off to Angkor Thom and the Bayon temple, and if the truth be told we much preferred this with its many stone Buddha carvings. There were also fewer people, the rain eased off a bit and the atmosphere and environment were much more relaxed.

Our final temple visit was to one in the middle of a lake that had a ceremony going on when we arrived with drumming music for the added effect…and then feeling slightly templed-out we returned to base for lunch and an accommodation search session for Bangkok, which is only a couple of days away!

Yet again Pisith invited us for dinner at the same “porridge” restaurant as our first night in town.  He is just such a lovely man and it was another evening of easy and interesting conversation over dinner, where we learned so much about more about Cambodia. Interesting Factoid number 2 ….there is no such thing as social welfare system in Cambodia so if you can’t provide for yourself it’s tough luck and poor Cambodians head to Thailand to seek asylum.  We were genuinely sorry to say goodbye to him back at the hotel and he seemed the same….giving us big bear hugs as he left.

What an amazing two days in Siem Reap…..we definitely experienced the best that Cambodia has to offer and we would both like to think that we will come back to visit some day.

We had planned to take a bus from Siem Reap to Bangkok to make up some time that I needed to recover from my accident in Vietnam, but we couldn’t find a bus company that would take our bikes even as far as the Thai border so we decided to cycle it….partly also because it would mean at least one more day in Cambodia.  We stocked up on a final blow-out breakfast before we left at 6.45 for what we had heard was a dull route to Sisophon….and it was!  Apart from a few cheery hello along the way, it was a long, flat boring ride into a strong headwind.  But we did meet these lovely cyclists who were so busy waving to Nigel they crashed into each other!

A few times over the last week we have noticed roadside shacks selling what we thought was pieces of sugar cane.  In Siem Reap we investigated further and found out that its sticky rice cooked in bamboo, so we were on the lookout for it today. We found it and when we arrived at our hotel it made for a tasty lunchtime snack.  Typical that we find it on our last day here!

As we had a few kilometres more than normal to cycle today we got to base a bit later than we usually would, but thankfully just in time to avoid a downpour!  The usual afternoon routine of snooze, chill and then headed out for an early dinner.  We asked for a restaurant recommendation at our hotel who directed us 1km away from town.  Assuming this meant there was very little actually in the town we decided to take a chance and go into the town to make sure.  We stopped at the first place we saw to have a very bland dinner of steamed rice and unidentifiable vegetables to then discover that there were about 15 other, much better eateries in the town centre!!! Why they didn’t tell us this in the hotel we will never know, but after all the great food we have had in Cambodia it was such a disappointing last meal.

Hard to believe we will be back in Thailand tomorrow! Before we crossed the border into Cambodia I was feeling a bit jaded from travelling.  Dealing with the constant language barriers and cultural differences can be exhausting at times, and on top of that, having spent two months in Vietnam we got into a comfort zone there. So I wasn’t particularly looking forward to having to deal with a new country again ….especially one that was less developed and what we believed would be a difficult experience. For the first 24 hours I was a bit out of sorts, but that quickly changed … mainly because of the friendliness of the people. And if you add quality, good-value accommodation as well as excellent food into the equation it made for a very enjoyable experience. We absolutely loved our 12 days here and it’s definitely up there as one of my favourite if not THE favourite country so far. We do plan to come back some time….maybe without bikes, but we definitely have more exploring and learning to do here.  Highly recommended as a destination for anyone who wants to experience something different!