Highs and lows in Cambodia 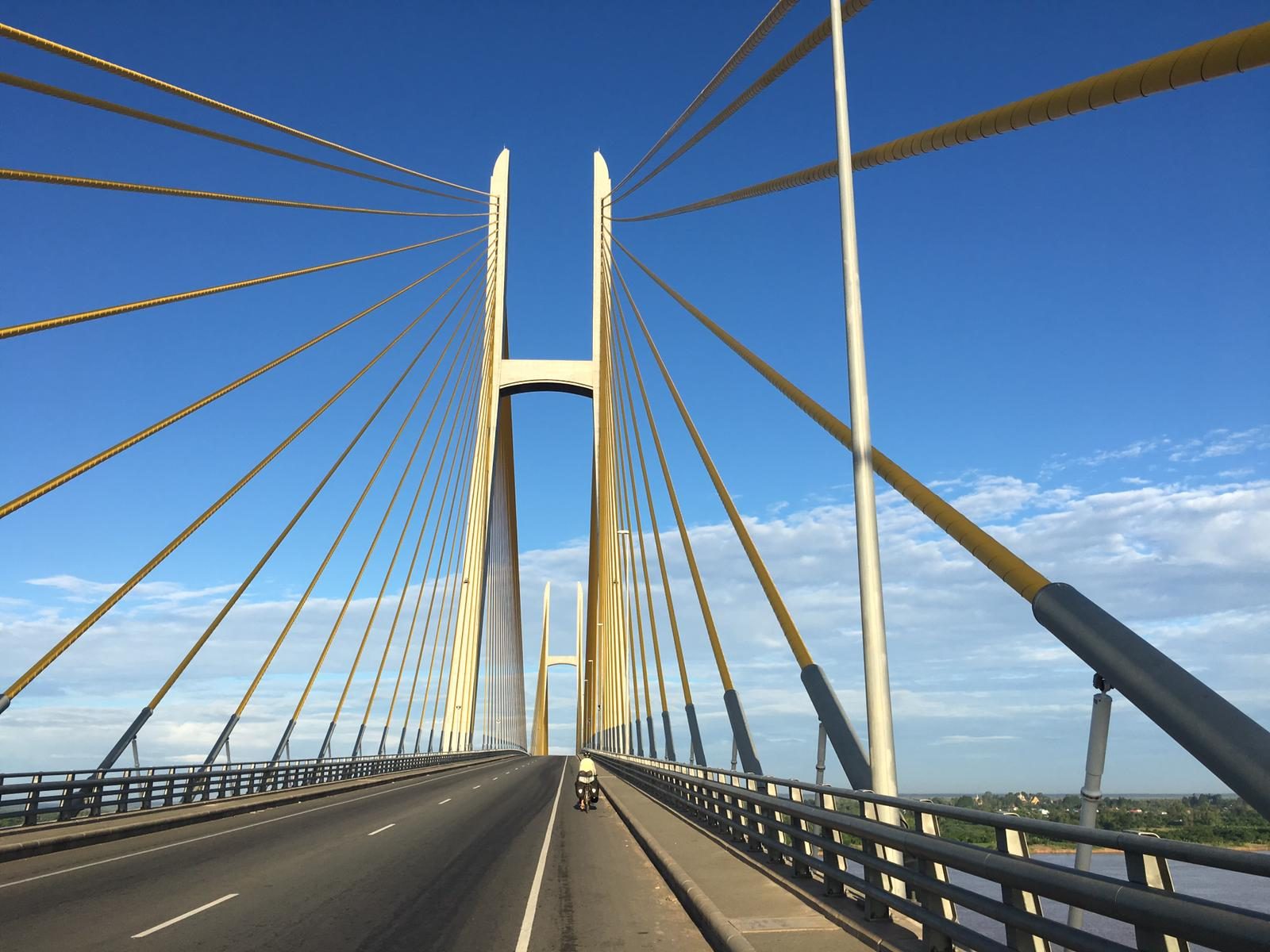 Our first proper day on the road in Cambodia and scenery-wise it’s not that exciting. A flat road that’s bumpy and dusty …..but considering it’s their main highway through the country it wasn’t that busy for a Monday morning, which isn’t a bad thing for us! Crossing the border from Vietnam yesterday we could immediately see that Cambodia is not as wealthy an economy and this became more obvious during our travels today…from the quality of the roads, how people dress, their houses etc.  Despite the fact that everyone seems to be happy and cheery it’s hard not to feel sad.  We knew we would see poverty on this trip and thought that we were used to it….if there is such a thing.  But having had 2 months in Vietnam we realised today that we were in a bit of a bubble and the poverty we saw there was nowhere near the level here, so coming back to it has shocked us.  And we are back to being conscious of the fact that we are rich, privileged westeners that we are a world away from normal life here….which is both confusing and depressing.

We passed lots of people working on contraptions like this by the side of the road …..apparently it’s beaten rice. At first we thought it might be oats and we would have happily bought some from their little stalls selling them, but then on inspection it looked like rice…and not quite sure how to we could use beaten rice.  But it sure takes some skill to ensure fingers don’t get crushed in the process!

A couple of interesting facts that we have learned about Cambodia so far.  Although their official currency is the Riel, the US dollar is the unofficial currency and is used more extensively than the Riel, especially in big towns. We are carrying Riel but everyone assumes that as westeners we use dollars, so it’s what we get quoted – even for a bottle of water.  And in a country of such poverty it’s understandable to get “over-quoted” on prices, which we have figured out quite early on. But relatively speaking it’s still only pennies so hardly the end of the world.

Another thing is that they don’t speak “Cambodian”….when I looked up Cambodian on Google Translate I couldn’t find it until I realised Khmer is their official language. The Khmer are the majority ethnic group and make up 97% of the country’s 16 million people. The country has had many different names throughout its history, including the Khmer Republic …and although it been known as the Kingdom of Cambodia since 1993, its people and language are still Khmer.

A pretty easy, if not dull ride into Phnom Penh, Cambodia’s capital city – number 16 on our trip!  It did involve cycling over a spectacular bridge to cross the Mekong river at the very start of the day …the last time we saw the Mekong was in Luang Prabang in Laos on 24th June!

Arrived in the centre of town late morning and stopped for a drink and an early lunch by the riverside before checking in to our AirBnB accommodation. We have been very lucky with AirBnB until now and although the lady and her son here were really nice and friendly we didn’t expect a dirty house or a large, bouncy, slobbering dog and a small yappy one as part of the deal, which meant that it wasn’t as relaxing an environment as we hoped it would be.  But it was in a central area that was more full of locals than tourists so that was really nice.

We ventured out into the city centre for dinner later in the evening and although we had planned to have an Indian we were side-tracked by some street food called Lotcha – short, fat noodles, served with vegetables – yummy! I thought it looked liked maggots at first so made Nigel check it just in case….

The first of our 2 days off in Phnom Penh.  A buzzing city that is in the midst of a boom yet has a dark and depressing history.  We decided to tackle the history aspect first.  We had a vague idea of what happened here at the end of the 70s, so we knew today would be mentally tough – in the same way as our visit to Auschwitz was back in June 2018.  But we also wanted to do it in order to educate ourselves better on Cambodia, it’s people, as well as remember those who suffered horribly.

Khmer Rouge, the communist party under the leadership of Pol Pot, ruled Cambodia (or Democratic Kampuchea as it was known at the time) from 1975-1979.  When he came into power (aided by the North Vietnamese communists) he implemented a regime to achieve a “pure” socialist society focused on agriculture that would erase class differences and start again at what he called “year zero”.  To try to achieve this he forcibly relocated the urban population to work on collective farms (forced labour camps) with the aim of increasing rice production.  Having already been traumatised by the American bombings of the Vietnam war, which in a similar way to Laos had badly affected the country, most people went along with it.  Questioning it or refusing to obey was regarded as being an enemy of the new government and these people were rounded up, tortured and killed – as were all professional and educated people.  Religion, commerce and education was forbidden, which meant that monks, the rich and even people who wore glasses, making them appear intellectual, were all perceived to be in opposition to the government and therefore all brutally tortured and killed. In 3 years, 8 months and 20 days almost 2 million people died – almost quarter of the population. …..around 1.2 million people in the mass killings, the rest from malnutrition or disease in the forced labour camps.

“To keep you is no gain. To lose you is no loss” and “Better to kill an innocent by mistake than to spare an enemy by mistake” were just two of the Khmer Rouge party mottos.

There was little-to-no outcry from the international community to this brutal regime, which was eventually toppled by the Vietnamese in 1979 – although Pol Pot and his government remained part of Cambodia’s internationally recognised government until 1993.  Pol Pot was never tried for his crimes against humanity but was placed under lifelong house arrest.  In 1998 he died, suspected suicide, the night it was announced he would be turned over to an international tribunal.

We visited Tuol Seng Genocide Museum or S-21, a secret interrogation and torture centre of the Kymer Rouge, which was built in a school. This was just one such centre in a network of nearly 200 across the country.

12,000 documented prisoners including 89 children were imprisoned here, but 20,000 is probably a more accurate number – with about 9 westeners among the victims. There are only 12 confirmed survivors, one of which was the narrator on the audio tour that we followed.  The stories and images were shocking…..we saw the actual beds were prisoners were shacked and tortured, the prison cells with blood stains still on the walls and floors, the graves of the last 14 prisoners who were found by their liberators in 1979 as well as photos of the many many prisoners who had lived through the hell of this place.

We also visited the “Killing Fields” on the outskirts of the city, which as the name suggests is where people were taken to be killed – or more accurately butchered, as they were generally hacked or bludgeoned to death because it was cheaper and quieter then using bullets. This site was originally an orchard and then a Chinese graveyard, but in this era became one of the 300 Killing Fields that have been discovered throughout the country.  17,000 civilians are thought to have been killed and buried in the hundreds of mass graves here, 86 of which are still undisturbed.

One of the saddest, most horrific and hardest things to get our heads around was this tree….

….where babies were held by their legs and bashed against the tree in front of their mothers and then thrown into a pit. Horrific.

This memorial pagoda in the centre of the site housed around 8,000 skulls exhumed from mass graves.

And a final sad and shocking fact from this site is that in the rainy season old clothes, bones and teeth from victims float to the surface and are collected on a regular basis.

Lets just say that lunch was a very somber affair.  Also worth including another interesting fact about Cambodia is that in the aftermath of this genocide, the country now has a very young population, with about half of its population younger than 15 years old and a lack of people over 50.

Later in the evening we went out for dinner locally and as we were waiting on food, this lovely girl Tepy asked us if we could help her with her maths homework.

She attends a local international school and has excellent English but her parents don’t speak English so can’t help her much with her homework. We were happy to help…and she was a real reminder of how positive and vibrant the people of this city are, despite having been to hell and back in the not so distant past.

A less emotionally-charged day as we wandered to the Phnom Wat, an ancient Buddhist temple in the centre of town …

….which had some funky music going on…

After a walk by the Mekong, we took it easy for the afternoon. As a city we really like Phnom Penh.  It’s definitely very different from the countryside that we experienced on our way here and feels very affluent…lots of big and very expensive cars (eg Bentley, Rolls-Royce, Mercedes etc) on the road here is just one example of that.   It has a lively night scene, good restaurants and varied cuisines to choose from and lots of tourists and ex-pat residents.  It’s also home to hundreds of tuk-tuks, which I don’t think we have seen since Bangladesh! After its recent history it’s nice to see and experience a city that’s on the up and that it’s people are smiling and seem genuinely happy.