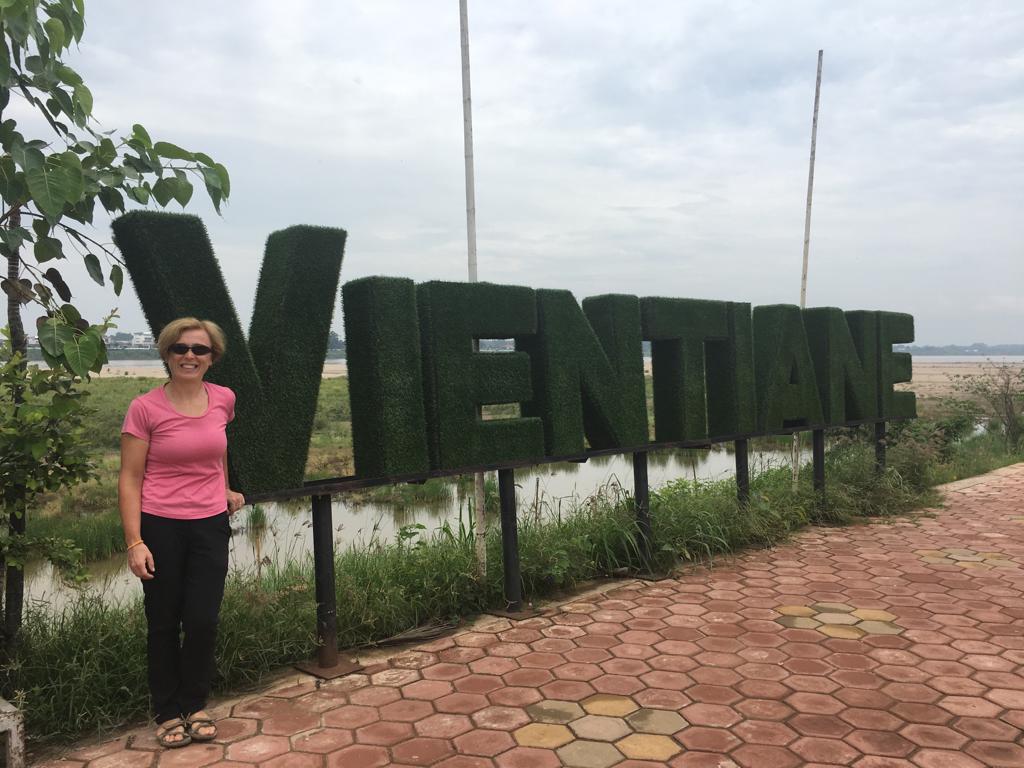 Vientiane is 35 kilometres from the Thai border, and as soon as we arrived a few interesting things happened….

The first is that we instantly became millionaires! The currency, the Lao Kip has 11,000 to £1, meaning that a £150 ATM withdrawal gave us 1.5 million Kip, which seems an absurd amount of money to carry around in a wallet!

The third interesting thing when we arrived in Vientiane was the European feel to the city.  We have already mentioned that Thailand felt very westernised, specifically American, with its wide roads, pick-up trucks and American brands. Here it’s definitely more European – particularly French, which shouldn’t be that surprising really as it was part of the French Colonial Empire in South-East Asia until 1953. But it is still feels a bit strange to to see French names on hotels, restaurant and streets names and to eat baguettes for breakfast, which seems to be standard fare in most restaurants. The pick-up trucks are still here but there many more 4×4 vehicles than we saw in Thailand, despite the roads being much narrower, but we expect that’s because the roads outside the city aren’t in great condition, which I am sure we will experience soon enough! They even have a “Victory Gate, the Patuxai Monument which is similar in style to the Arc de Triomphe in Paris.

We had heard that despite being the capital of Laos, Vientiane wasn’t that interesting a place to visit, but having spent 5 nights here as we waited for our visas for Vietnam, we would disagree.  We really liked it and despite thinking that we might struggle with our “forced” 5-night stay, we found plenty to do – and enjoyed it all. Sadly we have experienced more begging here and have seen some families sleeping rough which we haven’t seen since India.

The chicken was good but I wasn’t too keen on the chicken hearts and livers that Nigel relished with gusto!

We also saw a very big statue of their last king, offering his hand as a greeting to Thailand across the river, despite being defeated by the Siam (Thai) army in 1828 …..

We saw some pretty amazing sunsets over the river…

..sampled some of the local beer and although we saw an Irish bar advertised we decided to stick to local establishments!

We also took in some local activities alongside the river, which as well as eating the street food while sitting on very small stools……

….included exercising to either work up an appetite or work the food off!

Nigel also discovered drip coffee, which are individual portions of filter coffee  – a bit like a tea bag, except that you open it, pour water in and it drips into the cup like a mini coffee machine.  Genius – and another one of theose “why don’t we have this at home?” revelations!

One of the days we even managed a trip on our bikes to explore outside the city.

However it wasn’t all fun and games. The most memorable and sad thing for me was a visit to the COPE visitor centre – a museum with displays and films on the history of the bombings in Laos during the Vietnam war and related disabilities that resulted.  Some shocking facts that we learned during our visit:

Laos is an incredibly poor country and the majority of people survive and make a living from farming.  Although they need to work their land to survive, there is a constant danger of UXOs until the land has been formally cleared.  It also hinders development in the country because it’s difficult to build roads, schools etc until an area is formally cleared. Needless to say we won’t be wild camping during our stay here!

There are amazing charities that work to do this as well as COPE, which helps people with mobility disabilities – many of which are UXO-related.  On our way into the centre we passed a young man who had lost both his arms….a real reality check of how this is everyday life for many people and how the Vietnam war still has ramifications for the people of Laos today.