A week in Dhaka 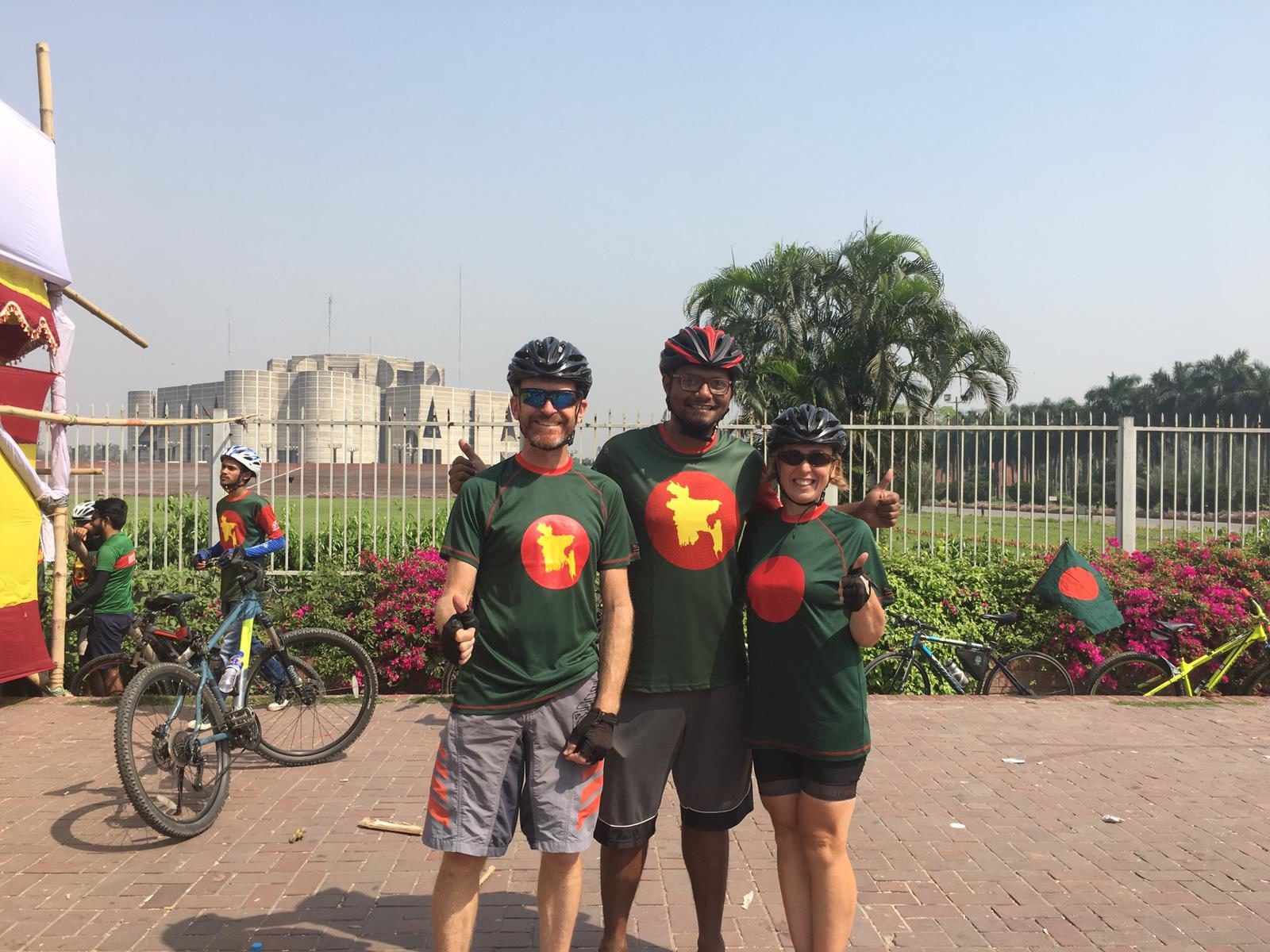 We arrived in our 12th capital city of our tour, Dhaka, on Friday 22nd March into Sadarghat port.

This is normally one of the city’s busiest areass but because it was around 7am on a Friday, which is the start of their weekend and a day of prayer for the mainly Muslin population, it was quiet and very manageable to cycle through the city.  We really couldn’t have timed it any better…apart from Nigel’s dicky tummy of course…!

Before we talk about Dhaka I wanted to share what we have learned about Bangladesh so far.  It’s the world’s most densely-populated country with about 168 million people living in a country just over half the size of the U.K. (population of U.K. is about 67 million), and even through we have already been to 2 cities before arriving in Dhaka, it really hasn’t really felt that way. There are definitely lots of people with not many gaps between cities, towns and villages, although saying that, these areas don’t appear to be overly built-up either, so we were expecting Dhaka to be like Delhi on steroids in terms of overcrowding.

In terms of culture and people we had expected Bangladesh to be quite similar to India, based on our ignorance more than anything else.  But from our experience so far, the country seems more modern and much cleaner, which has really surprised us. It’s as clean as London to be honest. And for foreigner travellers like us, everything seems a lot easier than it was in India eg getting SIM cards, paying with a credit cards in shops and restaurants, good accommodation with toilet roll as standard (!) and there have been much fewer request for selfies, which is a welcome relief. And the people are all really friendly and helpful  – probably among the nicest people we have met on our tour so far!

It’s hard to compare poverty here with India but we have however encountered more begging in our short time here than we did in our whole time in India.  It is also the world’s third largest Muslim-majority country after Indonesia and Pakistan, with Bengali Muslims making up 90% of the population.  And from the encounters we have had with locals to date, the recent atrocity in Christchurch, NZ has been very widely felt here.

So back to Dhaka, which has a population of over 18 million people.  Since we have been here we have been pleasantly surprised at how clean it is. From things we had read, we had expected it to be very dirty and polluted but that definitely isn’t the case.  There is certainly rubbish about, but not at all on a scale like it was in Delhi or India in general. Maybe our time in India meant that we are more acclimatised to it all – and to repeat what I said about arriving in Kolkata..expecting the worst is probably best preparation! It also feels very modern and not half as congested with people as we expected….apart from the traffic, which is like nothing we have ever experienced before.  Completely gridlocked with cars and rickshaws almost everywhere and for most of the days….that’s obviously where all the people are!!

In our planning for Dhaka we had contacted WarmShowers host, who unfortunately for us had immigrated to Canada. But he put us in touch with a cycling friend of his, Fahadul, who offered to host us.  He lives with his parents in a lovely middle-class residential area near the city centre and we have spent the last week here being so well looked-after by his mum.  Not wanting to completely overstay our welcome we are moving on to an AirBNB today as we are still waiting for our Indian visas to be processed, as we think a week of their hospitality has been more than generous so far.

So apart from a frustrating couple of days trying to get our visa applications sorted, a large part of which involved sitting in taxis in almost stationery traffic (2.5 hours to travel 13km!) we have had a really enjoyable week taking in the sights and sounds of the city, including…

Guided night tours with Fahadul, on bikes and on foot, one of which took in the very cool parliament building – specially decorated in their national colours for their Indepence Day celebrations on 26th…..

….discovering the delights of street foods which included flaming pan, which is a bettel leaf sprinkled with about 10 different ingredients including jelly, honey, syrup and other sweet stuff.  It didn’t look or taste quite as scary as I made it out to look in the video…

…scoffing bakor khani (tasty biscuits, which nigel had already tucked into before the photo)..

…a visit to Lalbagh Fort…

…as well as enjoying a great restaurant meal out with her!

…and we enjoyed some fantastic streetside cha (that tasted like a mojito!) with Fahadul and his friends.

We visited Old Dhaka city, which was so congested with rickshaws it a really difficuk to get around on foot…

…but we still managed to hunt down a delicious mutton biryani, (“Kacchi biryani”) which is the local speciality. (Our vegetarian diet has come to an end!)

Of the highlights of the week, number one was cycling through the streets of Dhaka on Tuesday 26th alongside 3,000 other cyclists as part of their Independence Day celebrations – suitably dressed in the Bangladeshi colours!  (Fahadul was one of the organisers of the event).

To think that exactly one year previous to this we had trekked our way to Kensington to the Bangladeshi embassy to get a tourist visa, to find the offices closed because of Independence Day…what a difference a year can make!

Dhaka and Bangladesh has been a real revelation so far and we are loving it.  We are are here for at least a few more days until our India visas come through, so no doubt a few more experiences to encounter before we leave!

Random picture of the week, which we think captures the diversity and ’bonkerness’ of Dhaka.  At least we know that chicken when you buy it here is fresh – they were all still clucking!