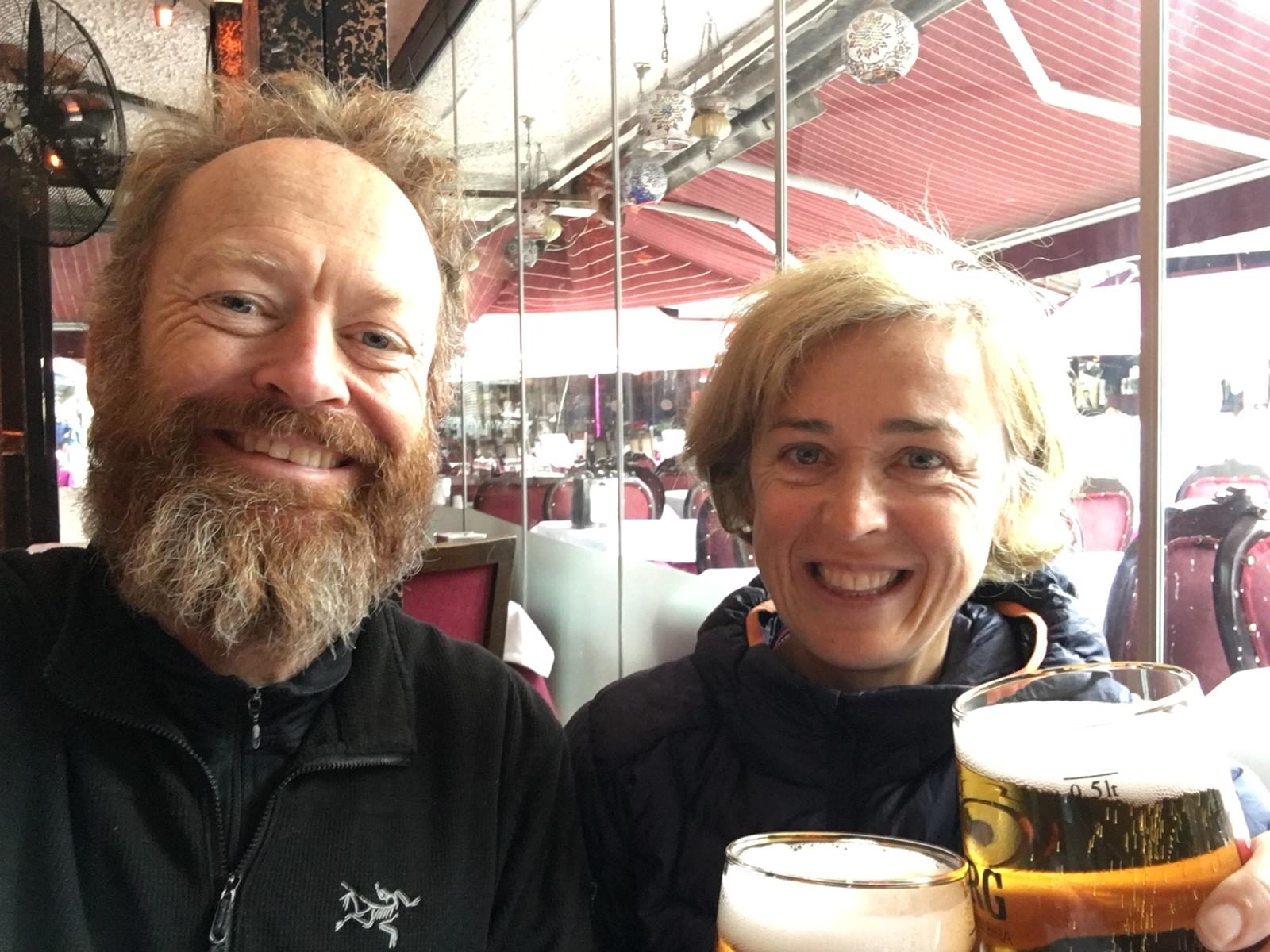 We were woken by the ‘call to prayer’ in Kesan on Saturday morning when it was still dark.  We have discovered that it goes from day to night and vice versa like the flick of a switch here, so by the time it was daylight at 8.15 we had the bikes packed and were ready to go.  We knew we had a long and potentially tough day ahead of us so we wanted to give ourselves as much daylight as possible…so off we went, absolutely clueless of what lay ahead.  I know we have had tough days before…thinking Norway, Slovakia, Bulgaria…but we are both agreed that this seemed like the toughest day yet – physically and mentally.  When we’d left our hotel, it was grey and overcast the temperature was around 1 degree Celsius and even with 5 layers on and my face covered, it was really cold – and we were battling a very icy headwind.  Hard to believe that we had been camping in Greece a week ago! 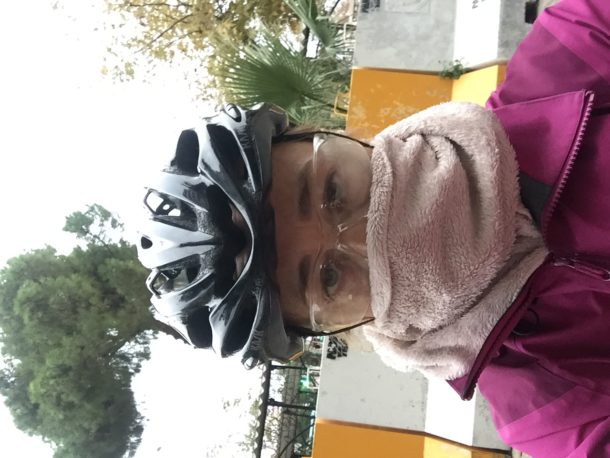 We then hit the first of our challenges on our journey into Istanbul….hills like we have not experienced before…rolling hills on steroids i.e hill after hill of long steep climbs 0f anywhere between 5-15kms followed by very short downs.  We were chilly, clammy and sweaty all at the same time…in other words, pretty miserable. Normally I feel the cold more than Nigel, but I think that changed today – and that worried me as he rarely complains.  And to top it off, the cycling was boring…wide straight roads that just went on forever with very little of interest to see.  Our destination was Tekirdag, which was 80km+ away and I really had a moment in the first hour when I wondered if we would make it…but the temperature rose a few degrees after the first 25km and psychologically we were almost a third of the way into our journey so things didn’t seem so desperate as they had done starting out.  The headwind had also died down to a mild cross-wind.

Lunch was a stop at a truckers cafe for some excellent soup and koftes to warm us up at the 55km mark. 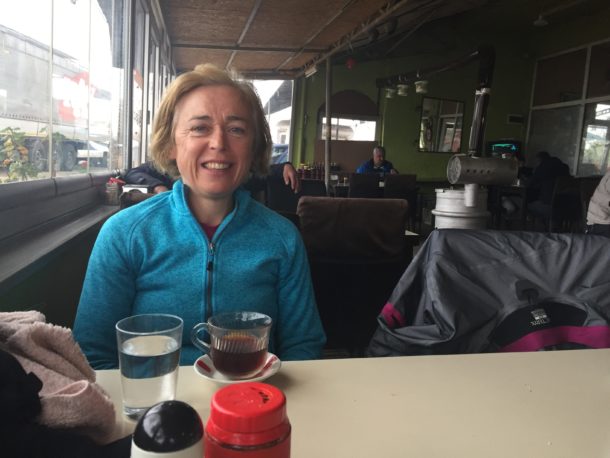 Then we were off again for an afternoon that nearly broke me when we encountered the second of our challenges…the wind.  After both commenting that it was great the head wind had eased off, it came back with a vengeance, just as we had a 15km climb ahead of us.  I was in my lowest gear, pedalling as hard as I could and getting nowhere fast.  It was completely soul-destroying and all I could see was more hill ahead of me.  I eventually got through it with streaming eyes, streaming nose and legs on fire and into a nice little down hill… to turn a corner to see another monster long up hill looming ahead. And of course by turning the corner, the headwind became a cross wind that threatened to take me off my bike every time a truck sped past. And that’s when it all felt a bit too much …..I started wondering aloud at the absurdity of what we are doing as well as ranting and shouting at the wind…all far enough out of Nigel’s earshot so that he wouldn’t realise I had turned into a mad woman!! I even had a little cry, but then pulled myself together and focused on Nigel on his bike in from of me, the yellow beacon leading the charge. I felt cheered up by a sign that showed 18km to Tekirdag, and when we stopped soon after at the top of yet another hill Nigel checked the GPS and we were only about 8km away…and it was downhill.  Yay!! Complete meltdown averted and we were in Tekirdag by 3.30pm and found a hotel along the sea front.

Once we had showered and warmed up, we decided to wander into the centre to check the place out and we were really pleasantly surprised. Tekirdag is quite a nice place with a nice bustle to it …can’t imagine many western tourists come here and there isn’t much English spoken, but we still managed another cake and tea stop before venturing back to base for evening meal and an early night! We felt we more than deserved it after the day we had just had.

After making the most of the hotel buffet breakfast we were on the road early on Sunday morning, to get as much daylight as we could for another big day.  Today we were heading to Silivri to stay with a WarmShowers host there, so we were looking forward to meeting a local. The hills weren’t as strong as the day before but man..the head wind – someone had tuned the wind machine on full blast and it absolutely battered us every kilometre of the way. Thankfully the hills weren’t as steep but that was little consolation for another boring straight road ride against the wind though we did have the sea to look at today. 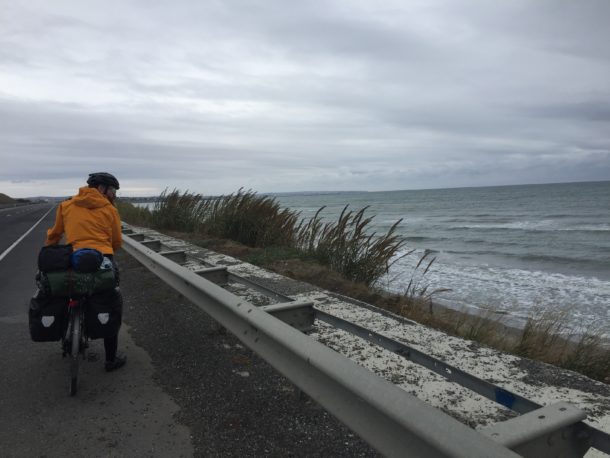 We had hoped to find another truck stop for lunch, but couldn’t find anywhere, so we pulled into a petrol station to eat our sarnies, and the lovely petrol attendant brought us hot tea as we obviously looked like we needed it.  Annoyingly just after we got back on the road again we passed multiple eateries with much more appetising options than what we had just had! The further we ventured, the busier the road got, which was heart-stopping and adrenaline inducing on many occasions, but we reached our host in Silivri around 3.30 to be ushered inside and introduced to his mum, dad, best friend and best friends wife and sat down to a delicious meal of home made borek and salad.  Eray our host didn’t have great English but his friend and wife did so they translated and so we had a lovely evening chatting, eating and generally relaxing… completely unaware of the challenges that awaited on Monday. 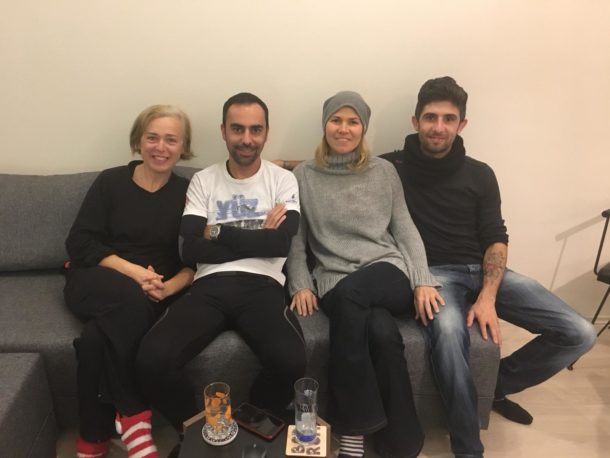 We had decided to take our time getting into Istanbul as we had read the horror stories of chasing dogs, horrendous traffic etc…so our destination on Monday was on the city outskirts – Avcilar…again to stay with another WarmShowers host that we had managed to contact.   We woke to a text from our Istanbul AirBnB host to say that he had to cancel our 10-day reservation from the Tuesday, so it wasn’t the best start to the day…so after a bit of internet research for alrernatives we were off.

The journey continued along the coastal route on wide roads with hard shoulders, so it was safe cycling.  Weather was quite blustery but nothing like we had experienced the day before so all was well.  We even got quite excited to see a sign for 100km to Istanbul and it all felt quite manageable. 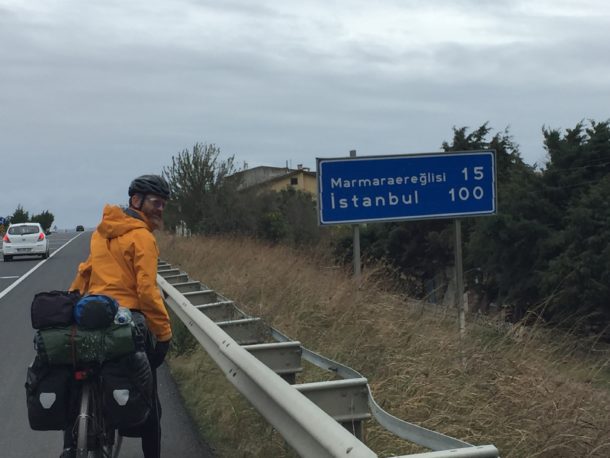 As we weren’t planning to cover a huge distance we had a cake stop and an hour later a lunch stop in the seaside resort of Buyukcekmece.  Heavy rain started as we were leaving so rain gear on and we were prepared for challenge 3…or so we thought!

Huge hills to get out of here was one problem, but the drains couldn’t cope with the heavy rain so there were torrents of water pouring down the roads and as well as trying to cycle uphill through them, every car that passed us absolutely drenched us from head to toe. The roads had also got narrower so we no longer had the buffer of the hard shoulder…and then the mother of all challenges (number 4)…we hit a 5-lane road at rush hour with 2 lanes of traffic travelling at 60km/hour trying to join these 5-lanes – all in torrential rain.  It is so hard to articulate how frightening it all was…nothing like the heart-stopping cycling from the day before….this was almost surreal – and we had about 20km to do on this road.  I focused on Nigel’s yellow jacket in front of me! But I honestly have no idea how he did it as he could barely see in front of him as he had rain and sweat stinging his eyes…buses were cutting in an out in front of us and drivers just focused on keeping their place in the traffic with no regard for whether they would hit the bikes or not.  When we managed to get off the road I was in bits but almost stunned into silence and Nigel’s comment was “well that was good practice, wasn’t it?” Almost made me laugh…but not quite.  We arrived at our host Mehmet’s place like drowned rats…and god was he amazing.  Helped us in with all our gear, hung it out to dry, cooked us an amazing dinner and basically made us feel at home after what we both agree was our hardest day of the trip so far.  What a star!

He made us a fantastic breakfast too before we left… 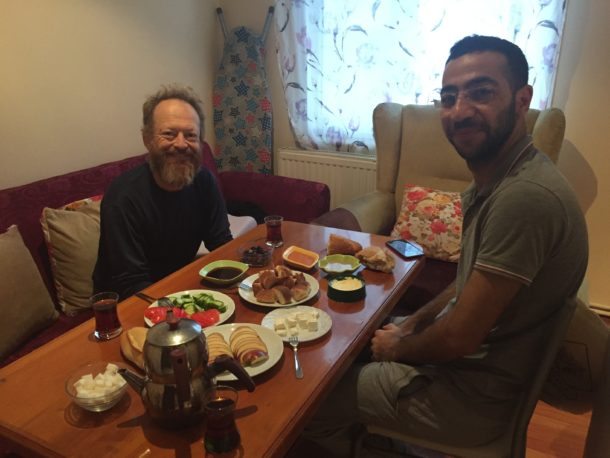 for our final leg into the centre of Istanbul and although we were both dreading what today would bring, apart from the first 30 minutes when we had to rejoin the 5-lane road… 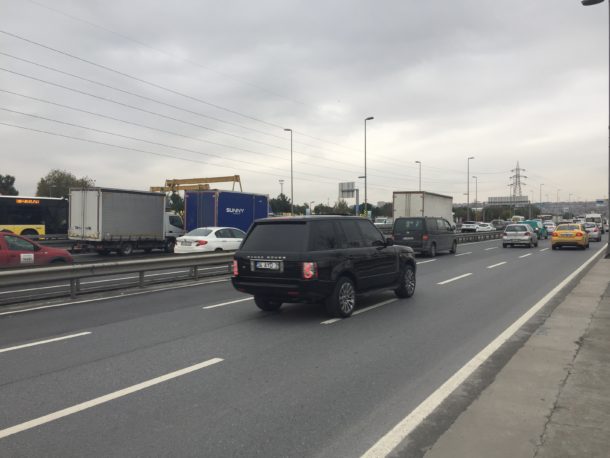 ..the rest of the journey couldn’t be described as enjoyable, but it was definitely a major improvement on yesterday. Nigel the Navigator definitely earned his stripes in staying off the major roads today…we even cycled along the coast by the airport! (You can see a tiny Nigel in the distance in the photo….)

Getting into the centre of town was a different kind of challenge in that we had to push our bikes up busy streets and compete with trucks, carts, motorbikes etc all chaotically taking up the street, but we made it in the early afternoon. We even think we go to  glimpse of the Blue Mosque in the distance but we can’t be sure.   Our new accommodation wasn’t quite as we expected but it’s the best we could do at short notice…so a mixture of annoyance at accommodation but relief, exhaustion and pride in the journey …we are here…after over 12,000km we have really cycled from London to Istanbul!

We are so looking forward to seeing our amazing friends Sue and Phil this weekend. They waved us off in Harwich all those months ago and are flying out this weekend to see us off to India..but before all that, it is time for a celebratory beer.  Cheers folks! 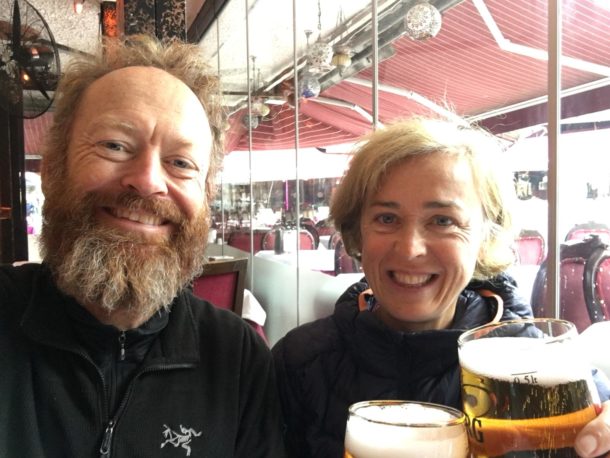