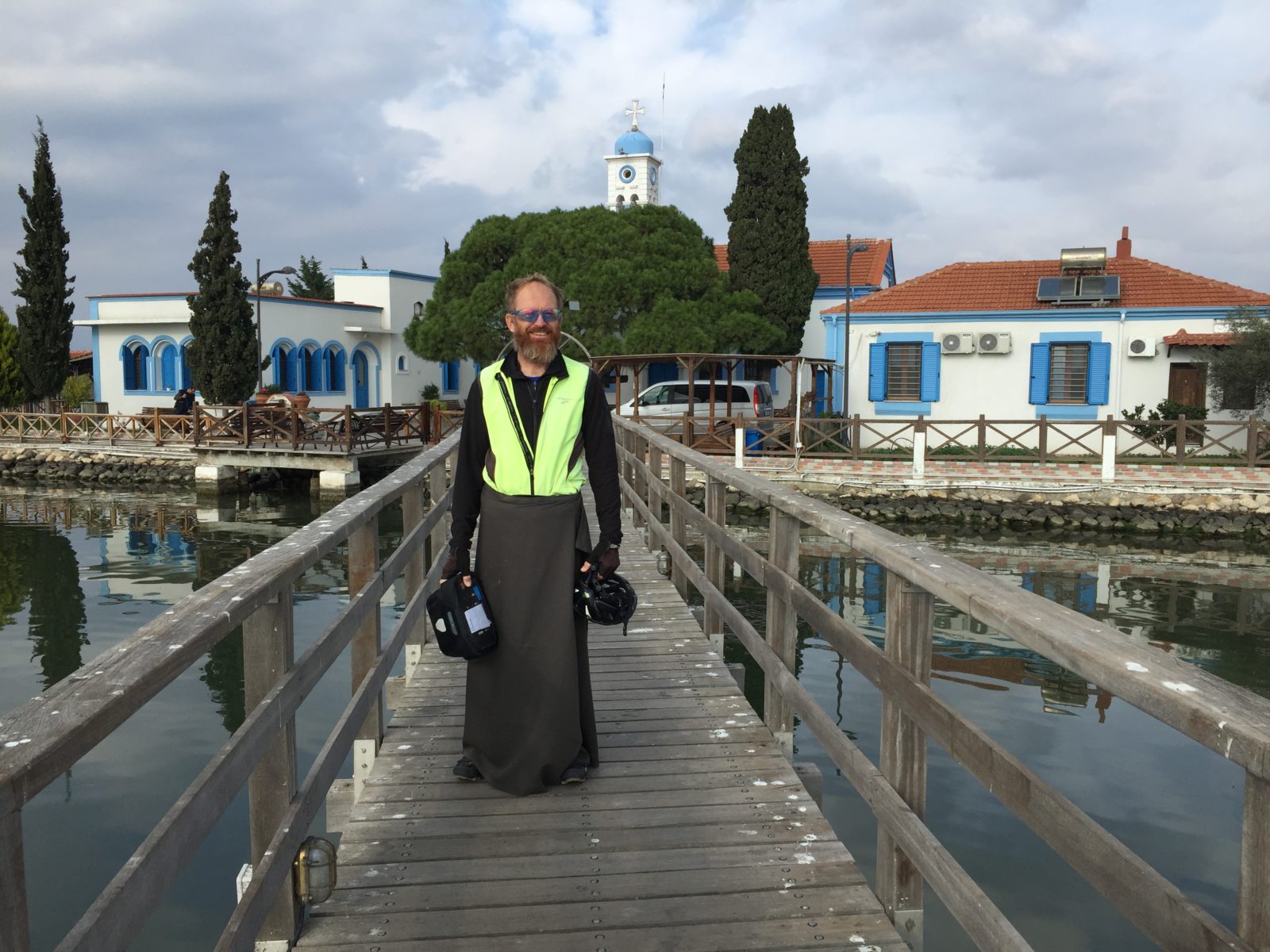 We really did have a lovely relaxing time in Kavala, so feeling refreshed we were up and out a bit earlier than normal on Wednesday morning to start our ride East. Our plan is to get a few big(ish) days in so that when the time comes we can hopefully take our time getting into Istanbul and not rush. It stared grey and remained so for the rest of the day, except a couple of times when the sun briefly broke through. Coming out of Kavala we did the obligatory stop at Lidl to stock up and then pushed on.

The road we took was the old main road, which has now been superseded by a major motorway, so in general it was fairly quiet and, to be honest, dull! The mountains to the north were quite spectacular, but for the most part a bit too far away to really impress. The rest of the surrounding scenery consisted mainly of flat farmland, quarries and industrial sites. At one point Martina had a bit of a run-in with a particularly nasty dog which decided that it liked the taste of her back wheel and panniers. It took a lot of shouting and slow cycling away for it to finally get the message…and luckily no lasting damage was done.

Early in the afternoon we passed through the National Park of Nestos Delta where we had the sea to our left and a large lake to our right. The road at times was more like a causeway with water close on both sides, so for about an hour it was very pleasant cycling.  At this point we came across the Saint Nicholas church and monastery, which occupy two small islands in a lagoon on the seawards side. As we’d basically been on bikes all day at this point, apart from a brief stop for lunch, we decided to stop for a look round. The chap on the gate looked after our bikes and told us that we needed to wear a ‘sarong’ as we were in shorts. He provided the sarongs for us and we went for a wander looking very monk-like.

The whole place is a peaceful haven and the two churches are really nice. We find sometimes with the larger churches and cathedrals that they’re so big you can’t get up close to anything and there’s generally a procession of tourists making loads of noise etc. Here, on the other hand, we were almost the only ones there and the churches are so small you could almost touch opposite walls at the same time. Plus we both rather liked rocking the monk look! As a bonus there was some Turkish (or should that really be Greek!) delight for us to try! 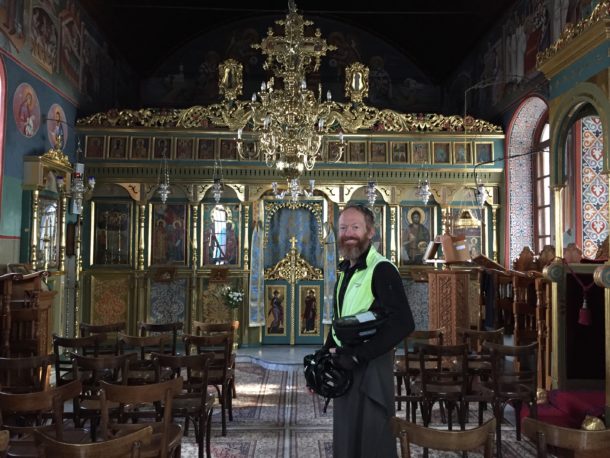 Back on our way and the road went back to being dull again unfortunately.  At about 3pm we passed 100km, which was good going,  though this was over flat ground (for once). At this point we were in a major industrial zone to the west of Komotini – we’d planned to wild camp, but the chances of finding a suitable spot around here was looking slim so we found an apartment in the town and booked it – half an hour later we were in!

The plan for Thursday was to continue east and get near the Turkish border so that we could cross on Friday morning. We’ve crossed borders late in the day before and it doesn’t give much time to find money and somewhere to sleep. We started out in light rain towards Sapes along a surprisingly busy road, which had a number of toughish climbs. The weather slowly cleared up and because the air was clear we had some really good views of the surrounding hills. 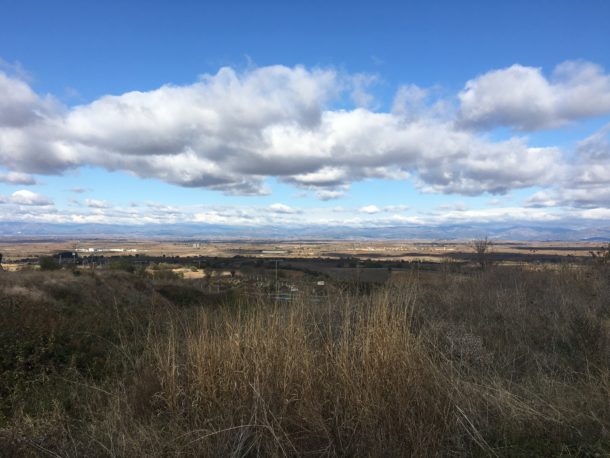 Not much to add for the morning other than a chap rolled down his van window and offered me two chocolate bars when we were stopped at a red light. I accepted them and Martina and I will testify that they were very tasty! There were a load of people hooting horns and waving at us today – more than the norm and one guy motioned that he wanted a coffee with us, but we declined, as we needed to push on.

Our route joined what was the Via Egnatia, an old Roman road which linked Dyrrachiun (now known as Durres) in Albania, to Byzantium (Istanbul) in Turkey. What is quite nice is that this road also went through Edessa, Pella, Thessaloniki and Kavala in its day, all places we have been to recently. It also went through a couple of places in Turkey that we are likely to go through as well. Needless to say the Romans knew how to build a road and this was no exception. The part that we took went south between some hills towards Alexandroupoli on the coast. The route hugs the contours so although the road is quite a bit longer than the modern motorway, the gradient is never punishing, even on a bike. It is also a very quiet and pretty route through the hills.

The rest of the afternoon passed uneventfully – we took the coastal road through Alexandroupoli and out the other side to Loutros. We found out this morning that there are mineral hot baths here, so we’d been looking forward to a dip, but unfortunately the baths closed at 3:30 and we arrived an hour after that.  This was a bit of a shame as it’s unlikely to have been the same “weird” experience we had at the last springs as these are indoors and more like a swimming pool…but we know we couldn’t have got there any earlier.

Up and out early on Friday morning and straight into a steady headwind which strengthened as the morning went on. This, mixed with some hilly terrain, meant really slow progress towards the Greece/Turkey border. We had a bit of a panic moment last night as we suddenly became concerned that bikes wouldn’t be allowed on the main ‘E’ road across the border, but found a blog on line from 2017 which said we could, so panic averted.  We have been on plenty of ‘E’ roads recently, but you just don’t know with borders. We did, however, have to take a longer route to the border to avoid an ‘A’ road (motorway in Greece) as we didn’t want a re-run of the journey into Sofia! Plus bikes are definitely not allowed on ‘A’ roads!

We joined the melee at the border crossing point at Kipis, bypassed the stationary trucks and got in the passport line. We’d read a few horror stories about crossing from Greece to Turkey and the officials there, but we really had very little problems. We were ahead of the game and in possession of eVisas which made the passport check smooth. A few truckers walked over and pushed in to get documentation, but that was a mild annoyance, though we did start to get a bit cold standing in the queue while everyone else sat in their nice warm vehicles. An officious customs officer made us take all of our bags off our bikes so that she could look inside – again a mild annoyance, but I did have the last laugh as she was rummaging through my dirty keks! She did ask if I was carrying any narcotics….I wonder if having endless episodes of Breaking Bad on our iPad count?!  She said everything was fine after a cursory check of only some of our bags and she then knocked off work leaving us to repack everything! One final passport check and that was it, we were across the border and onto a nearly empty dual carriageway with a huge hard shoulder…so we felt pretty pleased with ourselves! Country 17 on our trip so far.

The temperature was about 7 degrees with a strong wind, and that checkpoint process had taken about 45 minutes, so we were feeling very cold.  About 30 minutes later we were on the outskirts of Ipsala, the first town in Turkey. I spotted a restaurant at the side of the road and we decided to stop for lunch and to warm up – as we went across the border we moved forward another hour, so it was lunchtime anyway! We had a big bowl of soup each and a shish and kofte kabab between the two of us, which warmed us up nicely. Back on the road to Kesan, our destination for the day, and we were into monster rolling hills, really big ups and downs that seem to go for ever, and all the while with a strong gusting cross win.  Very difficult cycling. 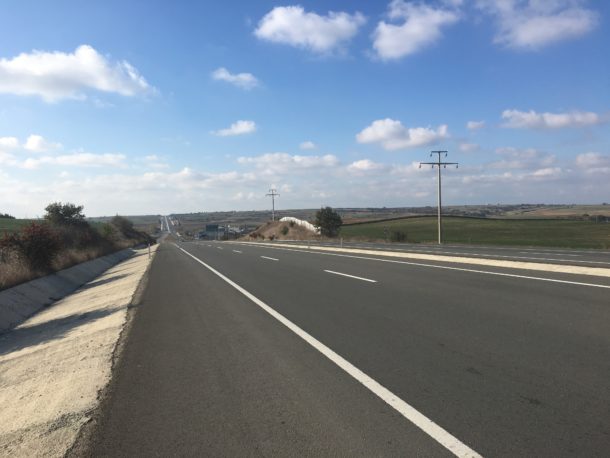 The hill into Kesan was pretty tough too, but once in the centre we spied a hotel and as we rolled up we were pounced on by one of the guys from inside. I’m not keen on being pressured in to things but I went in to find out the price anyway and could walk away if necessary – it was basic and cheap and they would store our bikes inside, so all good.

After sorting our stuff we had a walk around the centre – not the prettiest place, but it was certainly busy with people, cars, trucks…you name it, it was there! We found a phone shop to get a Turkish SIM as we didn’t want to have an expensive faff on mobiles like we did in Serbia -so got that all sorted and went for (Turkish) tea and cake. Having had a bit of a late start in Greece we decided to start cake-watch in Turkey as early as possible, and very tasty they were too!  And the Turkish tea is even better than the cake! 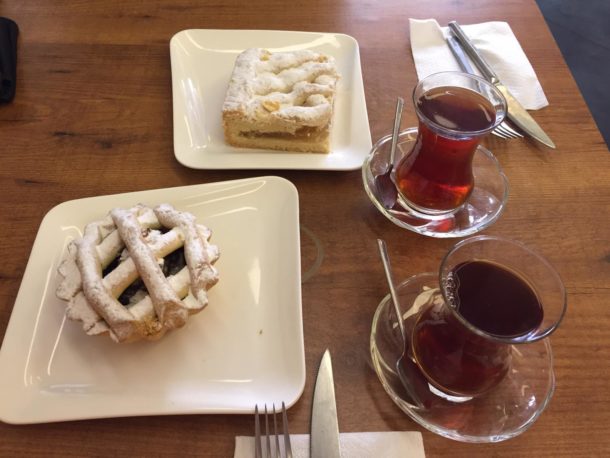 Turkey feels very different to anywhere we’ve been to before, especially as we have heard the call to prayer a few times already.