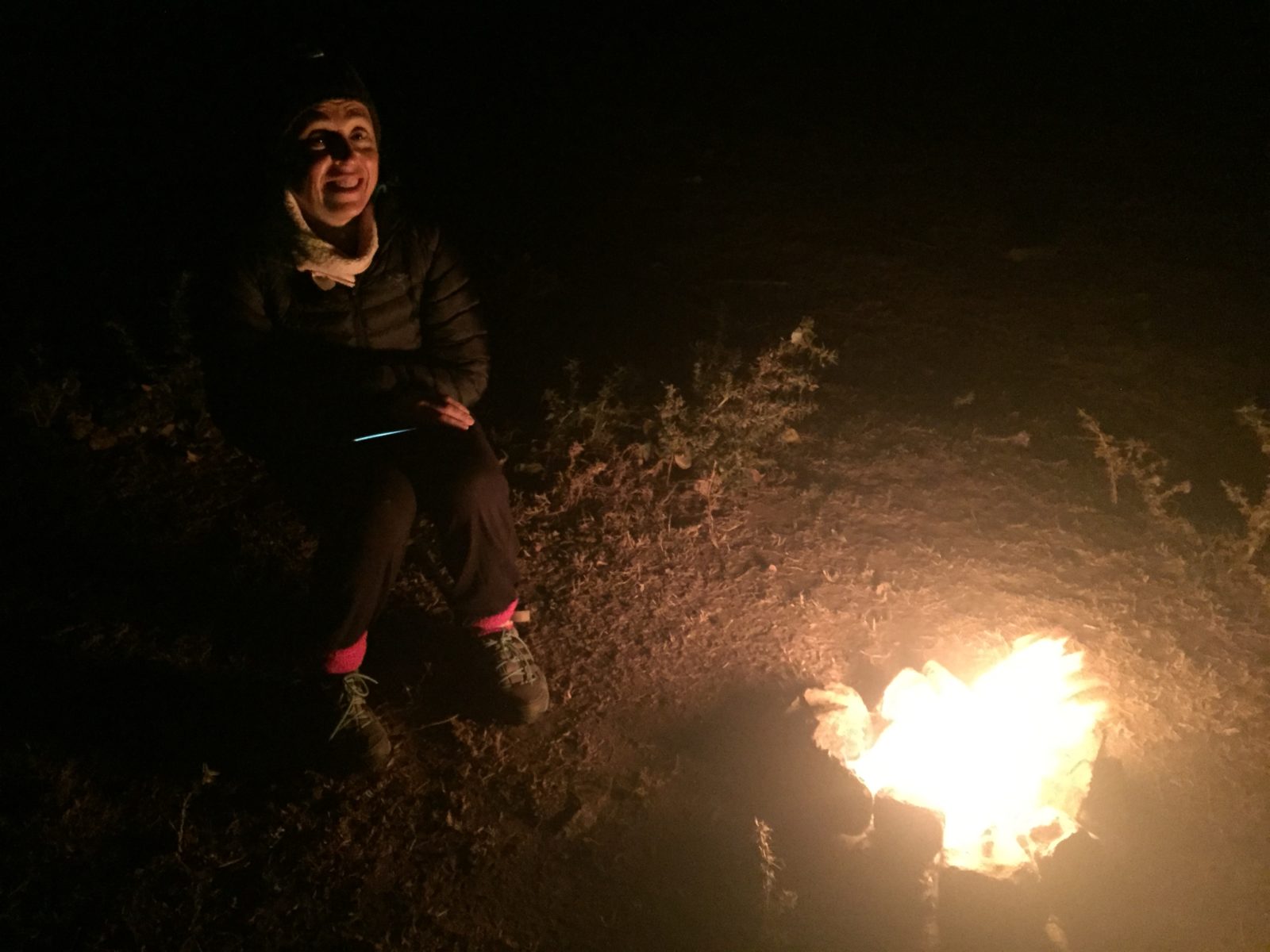 So we arrived in Greece without a welcome sign and as we came through the border we saw 2 cyclists coming up the hill towards us, so we all stopped to have a chat.  Erik and Irini are a lovely young German couple who have been cycling around Europe for 4.5 months and they had plenty of stories and tips to share on Greece.  Likewise for us on Bulgaria and Romania where they were heading and I even had someone to give my spare Bulgarian change to  – horrah!!  After about an hour we had to force ourselves to stop talking and move on or we would have easily spent the afternoon there. 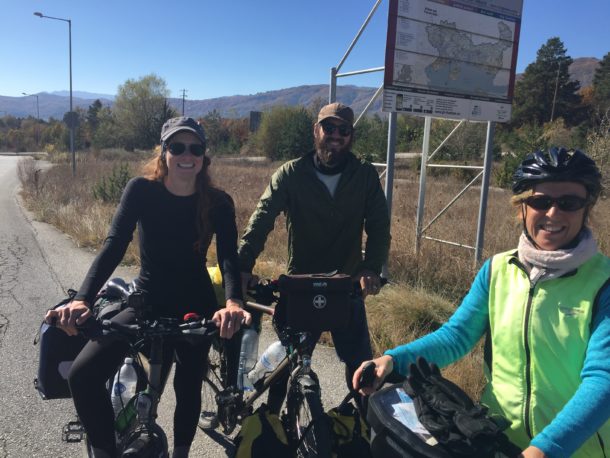 We hadn’t really planned a fixed destination for our first night in Greece and we had a choice of 2…either to visit the city of Drama or to visit the Aggitis river caves. From the border to where we had to make the decision started off downhill through lovely mountains on a quiet road, so it was a nice introduction to Greece.  But we did hit some challenging ups on the way so it wasn’t all easy – but not quite the monster Bulgarian hills we had recently experienced.  We quickly realised that road signs are difficult to read here as they are nearly all in the Greek alphabet, which makes them look more like a mathematical equation than anything else! We opted for the caves and got there around 4.15, too late to take the tour before they closed, but time for a coffee and chill out in the riverside cafe.  There was a nice quiet wild camping spot nearby, so once the cafe had closed we set up camp, put dinner on under the watchful eye of a local dog and we were in the tent by 7pm.  A relatively peaceful night apart from a car that drove past our tent at god knows what hour…probably a couple looking for a quiet spot, which we had obviously pinched!

The caves opened at 10.30 on Saturday morning so we were all packed and in the cafe for 10am for Nigel to get his caffeine kick of the day.  A friendly local (Janus) came to chat to us who we found out was actually the tour guide for the caves. 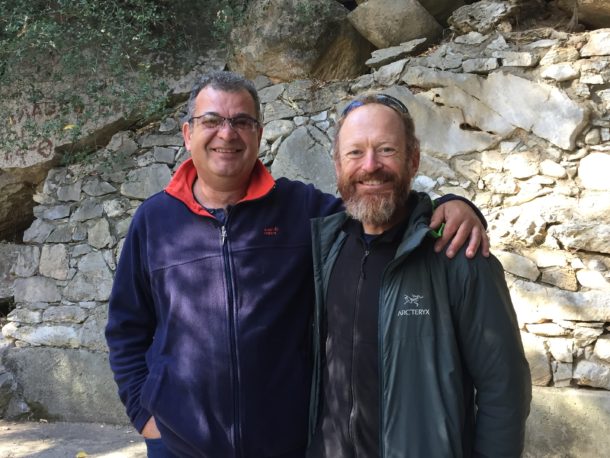 When we told him it was our first time on mainland Greece he said very tongue-in-cheek,  “Welcome to Greece….the country with Western prices but Ugandan wages…where no one can can afford to live”. And we could immediately see what we meant had as the prices of coffee at 3 Euros a pop was definitely a shock after Bulgaria!

We were the only ones there for the tour, which was amazing. The caves are 20 million years old which is impossible to get our heads around and they are absolutely stunning with marble rock formations and a crystal clear river running through them.   Lots of bats as well; a few of which we saw flying around. The caves were only properly discovered in 1978 and because river caves are notoriously difficult to make accessible we only got to see to see a small part of them..but definitely worth it. 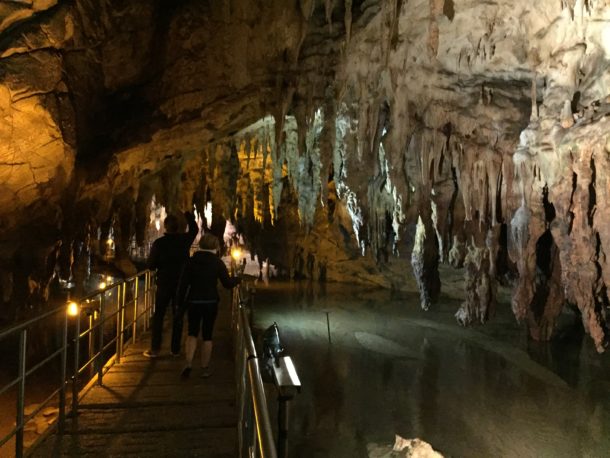 After our tour it was another cuppa (no cakes yet as we still have a mountain of chocolate from Bulgaria consume!) and back on the bikes heading in the direction of  Serres.  As well as being a brilliant tour guide, Janus had given us lots of tips for places to visit so we are heading west before heading towards Thessaloniki and then possibly towards Mount Olympus.  We were pretty much into hills straight away and what’s interesting is how different they are to the mountains of Bulgaria. Here they have a more Mediterranean “scorched” look to them than the forested mountains of Bulgaria, and they are volcanic.  We have also seen olive trees for the first time which is definitely a Mediterranean thing.  We stopped for lunch in the only decent-sized place we have seen to far and had a very tasty shish kebab and chips. The plan was to wild camp so we grabbed the chance to have a hot meal of something other than tuna and pasta!

Feeling like I had overeaten we headed off again in the knowledge that we had some more hills to tackle….but God almighty, nothing could have prepared us for what lay ahead. We battled some tough narrow roads and went through one tiny village where some locals cheered us on and gave us thumbs up as they sat and sipped their drinks watching us – obviously enjoying the entertainment of us puffing and panting past them! So far on the trip only one hill has got the better of us – the one on the way up to the Szalay household in Pecs, Hungary…until today that is.  We turned a corner and we could see that the road went up and over the mountain at a constant gradient of about 20%.  There was absolutely no way we could do it without possibly injuring ourselves, so we decided to turn back and take another route.  Less hilly but still challenging…and we thought that Bulgaria had thrown the worst at us!! The down side to this new route was that it was along a more main road – not too busy, but not the most ideal for wild camping.   But around 5pm we spotted a side road and ventured up there to find a flat but fairly exposed camping space.  But as it would soon we dark we took the risk that we wouldn’t be seen….other than by the one nosey neighbour nearby, who definitely saw us from his garden, but thankfully left us alone to fall asleep to the sound of hundreds of crickets. 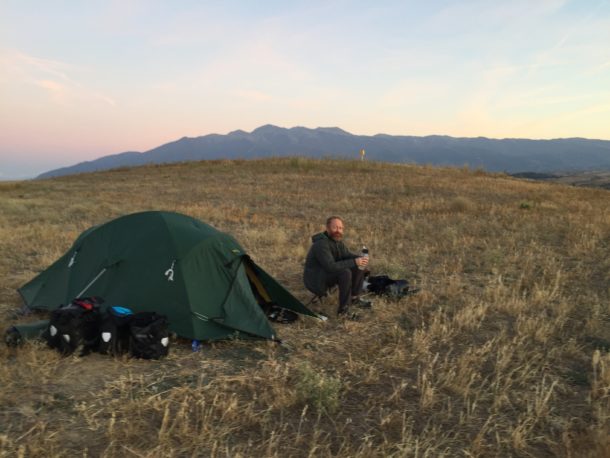 No interruptions in the night thankfully but we woke to a grey sky, with a look of rain coming our way so we were on the road fairly early.  Although it was a main road, it was quiet as it was a Sunday.  The weather completely changed to become sunny and humid so by 10am we were grunting up a hill with suncream and sweat in our eyes.  There was still some mist and cloud on the hills so it wasn’t the most inspiring landscape, but we have been pretty spoiled over the last week or so, so we can’t complain.  More hills for the first couple of hours, but as we headed towards the town of Serres the road got flatter.  As we hadn’t had our morning cuppa we decided to stop in a small village about 20km outside Serres. As we came into the village we heard music from the church and just thought it was Sunday mass or the Greek Orthodox equivalent…to discover it was a live band with a big crowd gathered.  Turns out it was Greek National Holiday (Ochi day) to celebrate Greece’s refusal to collaborate with the Nazi regime in 1940  ( “Ochi”means “No” in Greek)  and it’s generally celebrated by parades and folk dancing.  When we were in Norway we got to celebrate their national day in their capital city; this time we got the rural treatment…which was lots of cute kids all marching out of time and out of sync, with proud parents looking on. 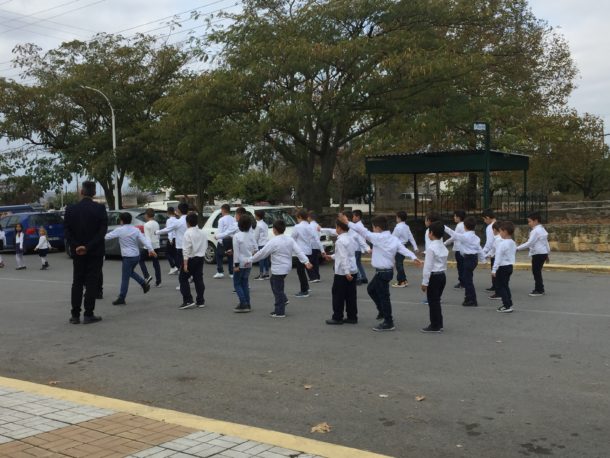 Back on our bikes and we reached Serres at lunchtime and that was completely chaos.  The marching was still going on there as there are obviously more bands and kids, but we managed to get a table in a restaurant for lunch.   Same drill as yesterday…we are likely to be wild camping again tonight so better to stock up on hot food at lunchtime if we could.  It took a while to get served and we had to move tables so they could fit more people in (for which we were rewarded with a complimentary beer!) but It was so worth it as we had a delicious Greek salad, grilled sausages and a burger stuffed with melting cheese….and loads of chips.  Proper cycling food to set us up for the afternoon! 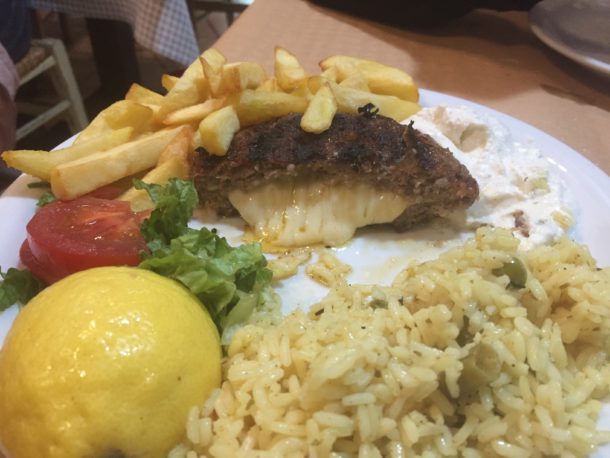 Rest of the afternoon was pretty flat cycling, through a few villages that still had their national celebrations going on…and here was us thinking that all the flags that we seen so far were because they were generally patriotic! Our destination was Lake Kerkini, which we made around 5pm.  A nice spot surrounded by mountains and lots of local fishermen and some passenger boats. 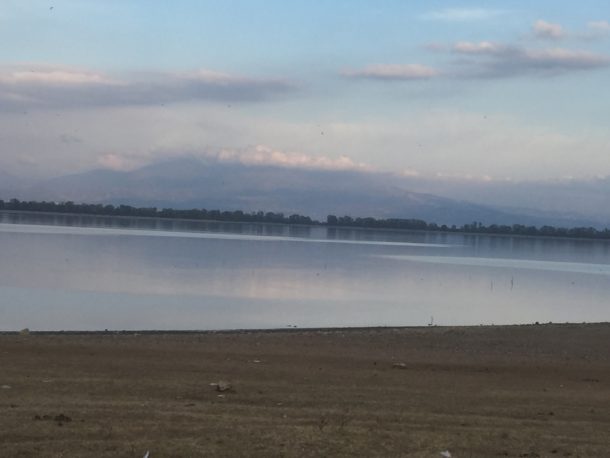 Unfortunately it was surprisingly dirty with lots of rubbish left from previous campers, which was a shame.  Found our place to pitch the tent beside some trees and as we were setting up got chatting to a nice Swiss guy Sebastian who was touring the area in a camper van.  Just as he was leaving us we heard really loud humming, which we heard been there before and looked up to see HUNDREDS of mosquitos swarming around the tree just above our tent.  Horrendous! So it was a very quick change and into the tent even though it was only 6pm (but it was dark). Miraculously they seemed to stop as quickly as they started and we ended up lighting a camp fire and having a very enjoyable evening by the side of the lake.   Considering how little I had camped before we embarked on this trip I am kinda getting used to this outdoor life! 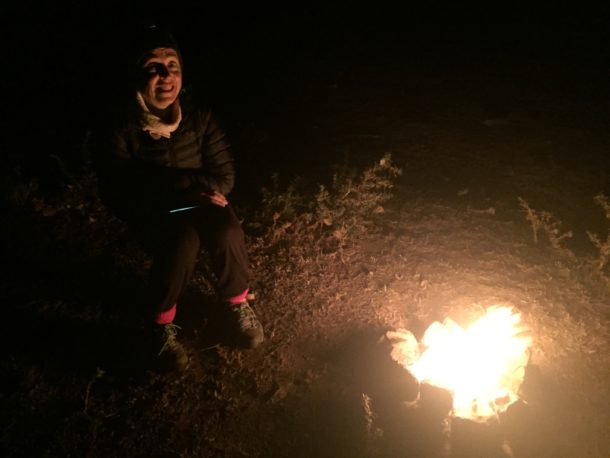