Oh I do like to be beside the seaside… 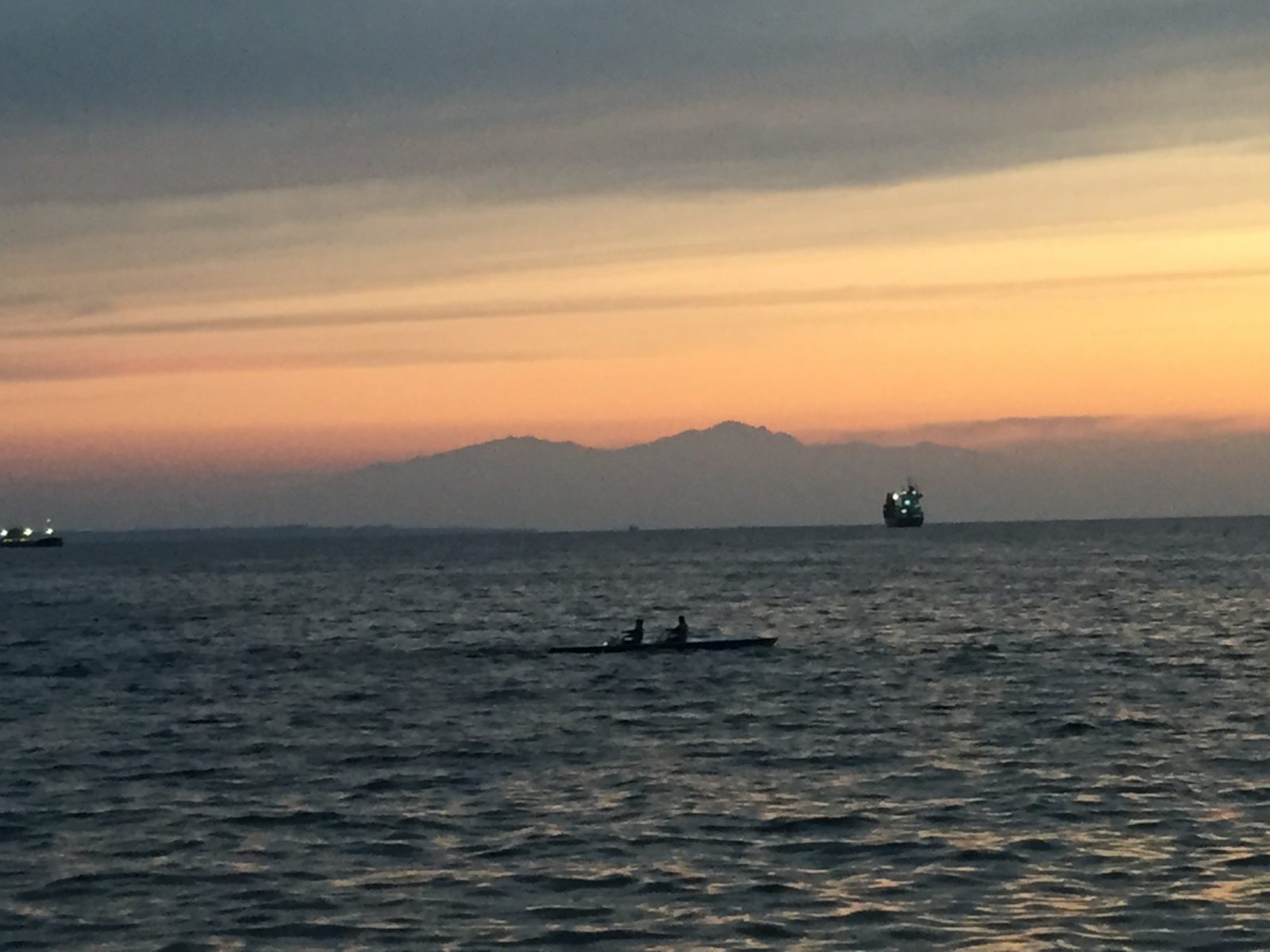 We haven’t seen the sea since Gdansk in Poland (31 May), so we are quite excited to head towards Thessaloniki for a few days off by the coast.  It’s over 100km away so we had a choice of taking one full-on day to get there or two smaller more manageable days.  Having just done 12 consecutive days cycling on some tough hills we opted for the two-day journey, but it meant wild camping en route as there didn’t appear to be any accommodation along the way where we needed it.

Getting out of Edessa was one big downhill slope and the rest of the day was flat road with nothing very exciting or startling to look at.  We stopped for a coffee break in the warm sunshine in Krya Vrysi, which turned into lunch in a nearby park and then back on the bikes for the afternoon.  The usual drill around 4pm in that we started to look for a camping spot, but it was mostly ploughed fields in open countryside, so not ideal.  Coming out of a small village called Adendro we saw a lovely little park but because it was very exposed we felt we should ask permission before setting up for the night. There was one guy outside a nearby house who miraculously spoke English. He said there shouldn’t be a problem so off we went. However we did notice an elderly couple sitting on the porch of the farm directly opposite, so we decided out of courtesy we should also check with them. Mama directed us to her son around the corner who told us in minimal English that we would need to ask permission from the “president” and proceeded to make a call.  He didn’t get a response so then said he didn’t know if we could camp…in the meantime Mama served us coffee and homemade sugary treats (sounds odd and strange but they were baked and sweetened tomatoes which were absolutely delicious!) and we sat with her and Papa while the son and dad had a bit of a heated discussion in Greek. We reckon it went something along the lines of “For Gods sake son, what harm can they do…there is not problem with them camping there.  Stop being such an ar*e!” …as the son then said “I think it’s OK if you stay”.  We were planning to anyway, but of course we didn’t think that was worth sharing at this particular moment, so off we went, set up and had dinner just before it got dark…with lots of locals waving to us as they passed and a slightly sozzled older man came in to shake our hands to welcome us! Grumpy old son even came back an hour later to check we were OK and to tell us to come to the house if we had any problems during the night, so he obviously had had a rethink.

Off and away early in the morning, after declining morning coffee from Mama, for the 40km jaunt into Thessaloniki.  Not the most inspiring ride but some sterling navigation from Nigel meant that we managed to stay off all the busy roads into the city, although we did venture into some really poor slum areas.  I was going to say it was stress-free, but that was only for me as all I had to do was follow the man in the hi-vis jacket in front of me.  Nigel’s head was fried when we arrived as it had been a complicated route through the lovely (sarcasm!) port area into town and then when we were in the centre there were still so many one-way streets to navigate.  But we made it – and we were looking forward to two full days off.

I can’t say we fell in love with Thessaloniki, or even that our first impressions were that good to be honest.  We had expected lots of old pretty buildings and interesting old architecture in the centre, but it’s more like your average big busy, sprawling city with some interesting ruins dispersed throughout the central area, which consists mainly of 1960s buildings. 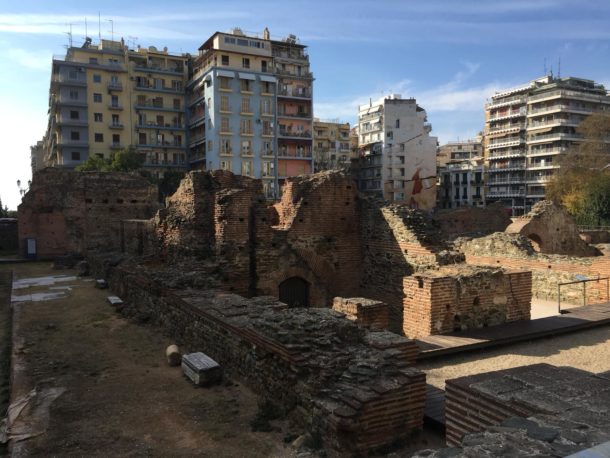 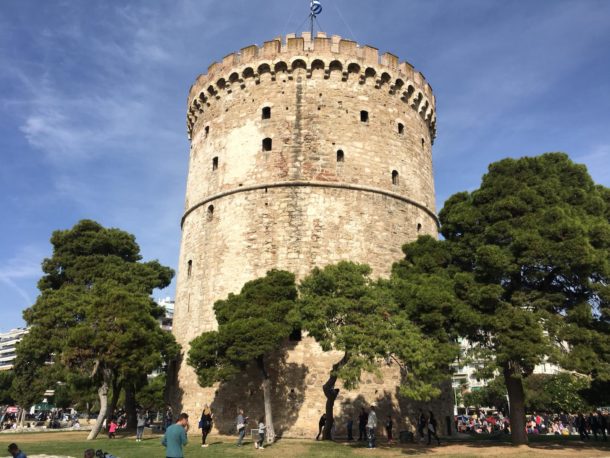 On Saturday night we ventured down to the sea front for a few drinks, which was absolutely heaving with people, but we opted for dinner in our local neighbourhood as it felt less chaotic and more relaxed.

Sunday we had a lazy wander around the city, taking in some of the main sights and again walking along the sea front, which was just one big procession of people with the odd cyclist trying to weave their way through the crowd.  It was warm and sunny so it was like a typical day by the seaside with vendors all touting their wares! 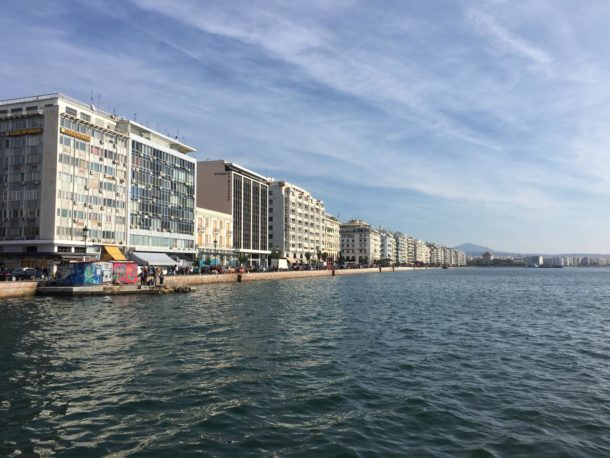 The walking tour of Thessaloniki takes place in the evening and we were in two minds as to whether we could be bothered going, but we decided to go for it…it might give us a different view of the city, as we still weren’t really feeling the love for it.  And we are both so glad we did it as it gave brilliant insight and perspective into what may not be the prettiest city in Greece, but it is definitely interesting.  It’s not a particularly touristy place either and there were only us and one other guy on the tour, so lots of opportunities to ask questions!

Thessaloniki is Greece’s second largest city and is named after the half-sister of Alexander the Great, who was the wife of the Macedonian King, who founded the current city. However it dates back to well before that as there have been inhabitants here for 23,000 years. We thought Plovdiv and Sofia in Bulgaria were old at 7,000 and as a comparison London is about 2,000 years old – so Thessaloniki is really OLD! Amongst others it has had Roman, Byzantine and Ottoman rule throughout its lifetime, so there was plenty of history and evidence of Christian, Jewish and Muslim habitation everywhere. It has also been flattened by earthquakes and war on numerous occasions, and then rebuilt, over the years. Most recently, two thirds of the city was destroyed by a fire in 1917, which resulted in mass emigration of the Jewish population, after which the city was rebuilt by a French architect in its current grid layout, making it easy(ish) to get around.

With their history, there is definitely no love lost between the Greeks and the Turks and what’s interesting to note is that the Greeks still refer to Istanbul as Constantinople (or just ‘the city’) which is what it was called before Ottoman rule (we had already noticed this when talking to different people since arriving in the country).  One of their most significant events was the “population exchange” in 1923 where 1.6 million Greeks or Othhodox Christians living in Turkey and 355,000 Muslims living in Greece were forced back to their supposed “homelands” but effectively made them refugees, with neither being accepted as nationals.  Our tour guide Antonia summed it up when she said that Greeks are very proud of their ancient Greek and Western history (and hence love being part of the EU), but don’t feel the same about their Asian history and therefore prefer not to talk much about it. The current population is mostly Christian (Greek Orthodox) although recent refugees from Northern Africa, Syria and Turkey are now arriving and settling here.

With all this extra knowledge we headed to the old Turkish area for some sight-seeing on Monday, which is so different to the lower town area that was rebuilt after the fire as it’s full of little cobbled windy streets and steep climbs. 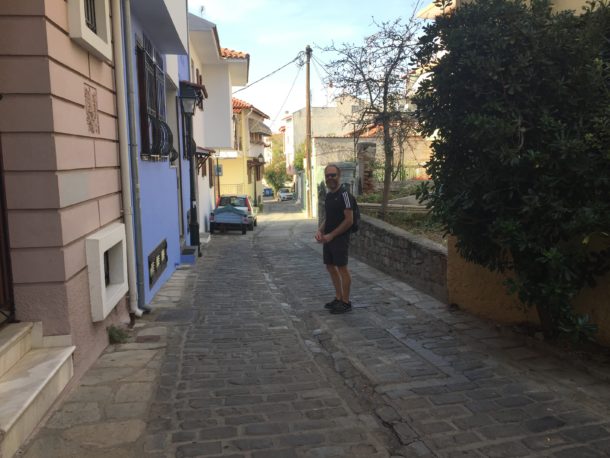 We visited a fortress from the Ottoman era high up on the hill, which was almost deserted and definitely not as well sign-posted as many less interesting sites in the new town area, so we wondered if this is what Antonia meant about not really promoting their Asian past.

We visited a monastery where apparently St Paul preached to the Thessalonians, converting many Jews to Christianity, with great views to be had… 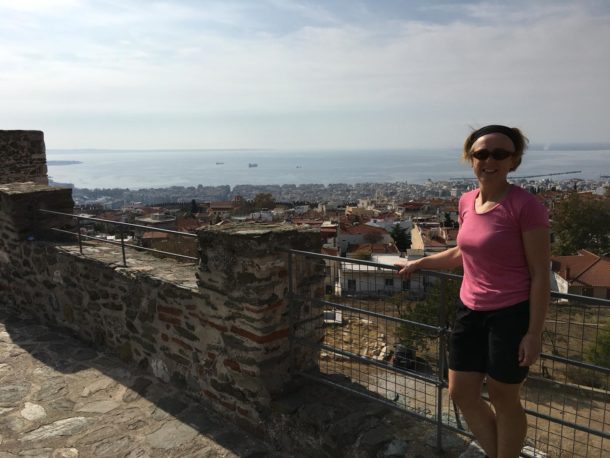 We also explored another smaller monastery and numerous churches including Hagia Sofia…the sister to the main one in Istanbul and the smaller one in Sofia, which we visited while we were there.  That just leaves the main one to visit in a few weeks’ time when we get to Istanbul.

We had hoped to get a view of Mount Olympus across the water during our stay, but Zeus, the king of the Gods, obviously has other ideas as mist and haze obscured it completely…until the early evening when we took a final walk by the sea front and there it was.  Considering it’s about 40km away it was pretty impressive! 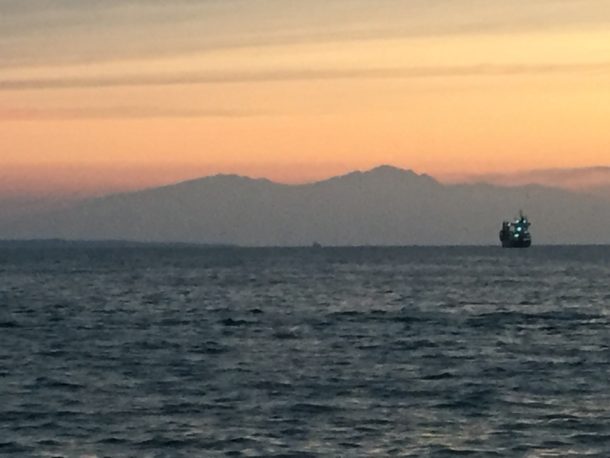 All-in-all, while we didn’t love Thessaloniki, it was definitely an interesting place to visit that is just steeped in history.  And we managed to have two rest days, which is always a bonus!