Carry On Up and Down the Mountains 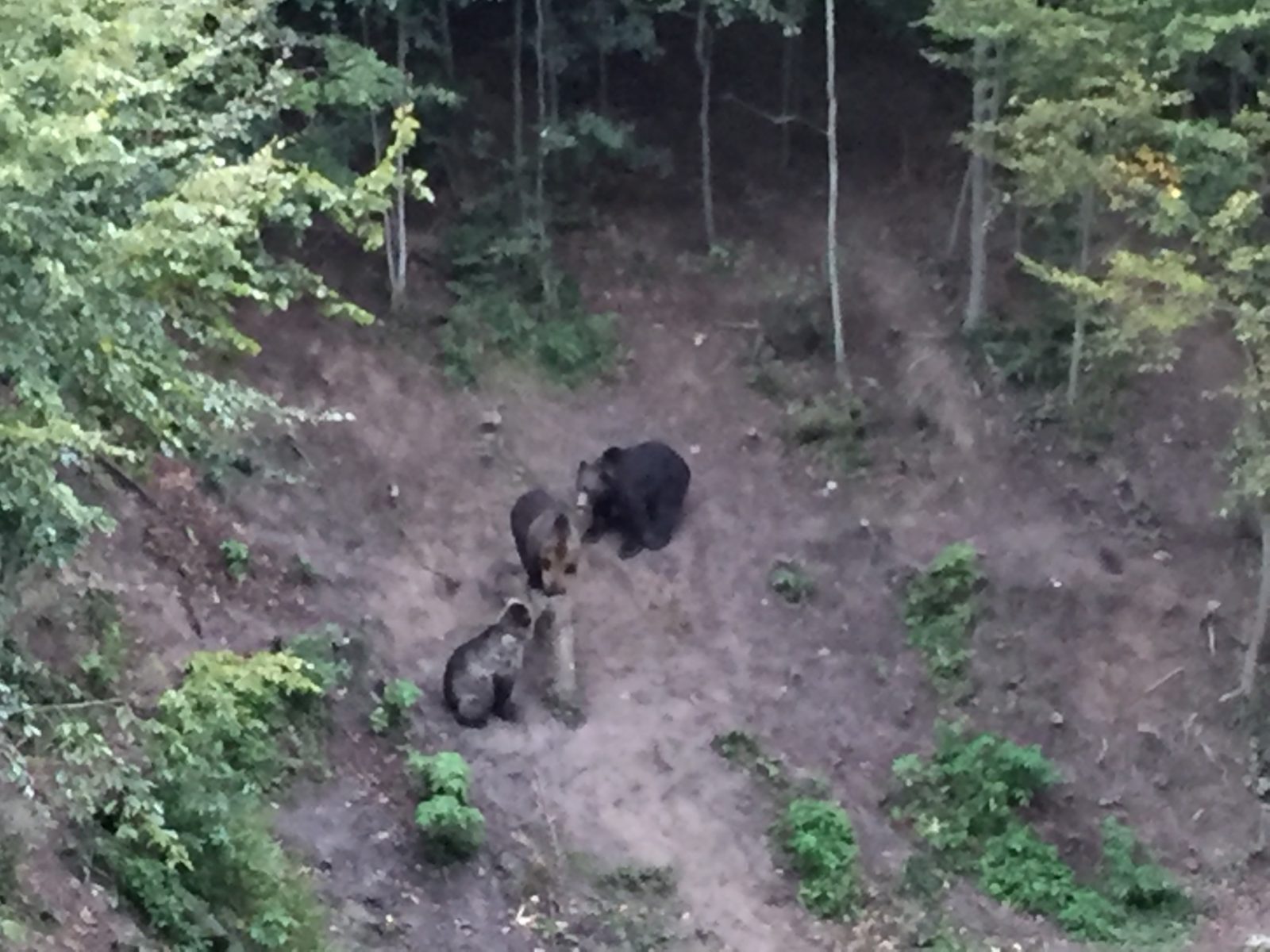 Someone’s turned the heating down. Just few days ago it was 30 degrees plus and leaving Brashov it barely crept above 10 degrees! The forecast over the next few days is even colder, 3-5 degrees during the days and -2 degrees at night. To be honest neither of us expected it to be quite as cold as this at this point and we will be heading into the mountains soon too so it’s all been a bit of a shock to say the least!

Anyway, Dracula wasn’t in, so we’re still none the wiser as to whether he actually exists! We made the short hop from Bran, into the city of Brasov just 30km away, the first 20km of which was reasonably pleasant riding slightly downhill with a breeze behind us. There were a few sets of roadworks to deal with and as we approached the city the traffic grew pretty busy, but we were in the centre of the lovely old town before midday. As we couldn’t check into our AirBnB until 1pm we ensconced ourselves in a cafe to have a coffee and watch the world go by. Like Sibiu, Brasov’s medeaval centre survived systematisation although the main square was turned into a parking lot for 20-odd years to stop the locals from congregating. It’s now back to being a square and as we found out is a very nice place to while away a few hours. 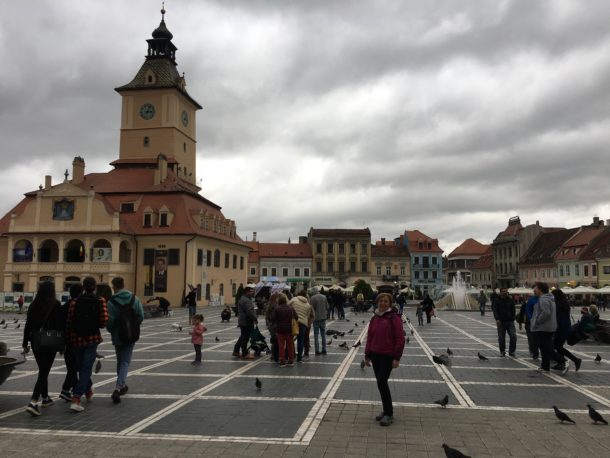 There are a surprising amount of tourists here (ourselves included), but when you realise it’s not that far to Bucharest and just around the corner from Bran you can see why – plus it has a draw all of its own.

Having dumped our bikes and gear at our accommodation we found a map and went for a wander – all over town. Brasov is nestled on a flat piece of ground within the curve of the Carpathian Mountains. Right next to the town itself, to the south and east is the wooded foothills, high up on which is Brasov’s version of the Hollywood sign.

We ventured up through Ecaterina’s Gate to St Nicolae’s Church, which we managed to see inside just before it closed. There was a sale of some kind on, but it was so dark in the church it was difficult to see what exactly was going on and we were rather ushered out before we got the chance. We had dinner later in ‘the place’ to be on a cold Monday night – a packed bistro off the main shopping street. Once again we had lovely food and we had got there just in time to get the last free table.

For once we didn’t fill the next day with too much stuff as this was supposed to be a day off – and we’ve already covered over 750km since being back on the road since Belgrade. So we had a leisurely get up and then hiked for an hour up a forest trail to see the BRASOV sign. Once up there you can’t actually see the sign itself as you’re right next to it, but there is an amazing view of the city, the plain it sits on and the mountains surrounding it. 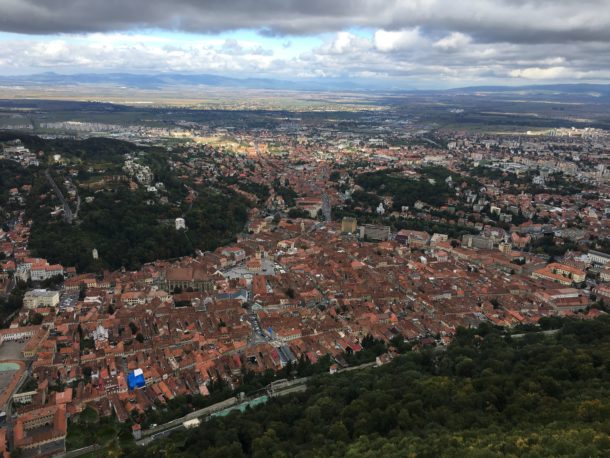 It was very cold and windy up there, which might be why we were the only ones there except for workman who was doing something to the sign. We didn’t find out what exactly and although he had a harness on, he wasn’t using it, so it was nerve-wrecking to watch him in case he slipped.

We took the ‘alternative’ route down, ie the wrong one, which took us down a really steep slope, and back into town where we visited the Black Church. It was burned down a couple of hundred years ago and turned black hence it’s name, though now it’s more of a browny/grey colour. By this point it was lunch time and we yet again lucked in by picking a buzzing bistro to eat some great pumpkin soup and beef stew. This place could easily have been in any nice part of London: the people appeared to be affluent as they were well dressed, the music funky and the food good. For some reason it seemed a bit strange to find a place like this when we’d so recently cycled through some very poor villages, but I suppose these extremes are the same the world over, and not just characteristic of Romania. 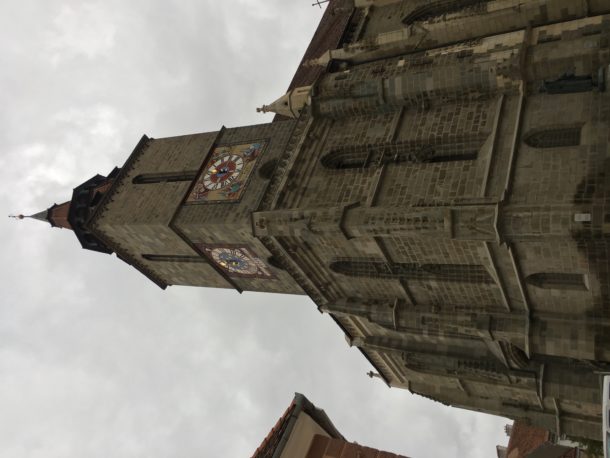 Our treat in Brasov was to go on a brown bear-watching experience in the Carpathian Mountains and this was booked for Tuesday evening.  Alex, our guide, picked us up just passed five and after picking up two Spanish girls drove us north out of the city to some wooded hills; We parked 500m from a hide which we were to walk to, but even as we were just out of the car we saw bear, wolf and fox paw prints in the mud. As we approached the hide there was a bear already in the clearing that the hide overlooks. It scarpered though, probably scared away by us traipsing up to the hide.  Although we were trying to be quiet we were dressed in our hi-vis rain gear…so it’s a good job bears don’t have great eyesight! We got comfortable inside the hide and waited, only for about 15 minutes before the first brown bear arrived. The guides put out chocolate which attracts the bears and in the next hour-or-so 8 different brown bears came along ranging from small 3 year olds to a big 8 year old.  Apparently Romania has about 6,500 brown bears and it’s estimated that there are 50 in that woods alone. They are very graceful creatures making them easy to watch; there was even a bit of argie bargie along the way as they all tried to get at the chocolate, but that just added to the experience. It was nice to see them in the wild only about 50m away and not behind a fence, but we did wonder what feeding chocolate did to them, especially their teeth, every night. 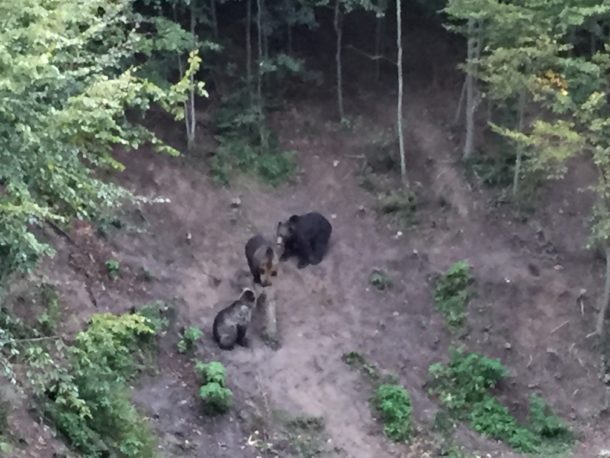 Next day it was proper cold when we were leaving Brasov – it must have been close to freezing overnight. We headed east and up into the mountains – steady upwards cycling for most of the morning with a few tougher climbs in between. We did, at one point, contemplate passing through the Carpathian Mountains via the Transfagarasan (aka the Transfarhaagandas) pass, made famous as the best road in the world by Top Gear, but the monster climbs look beyond us old knackers, so we’ll come back one day with unloaded bikes or, preferably, a car to do it in the future. So we woosed out and the route we actually chose was a much easier one to the east. Turns out that this route is pretty spectacular in scenery in its own right and we really enjoyed yet another great days cycling along quiet roads surrounded by wooded valley sides. It was bitterly cold throughout it though and it hailed a couple of times.  Martina said her toes were freezing all day, which makes for pretty uncomfortable cycling.  It also looked like there was a dusting of either snow or hail on the tops of some of the nearby peaks. In hindsight it was probably good that we didn’t attempt the Transfarhaagendas after all, as some of the passes there are higher than these peaks!

As we drew to the end of our cycling day the road took us along the sides of Buzau Siriu, a lake which made for more great views… 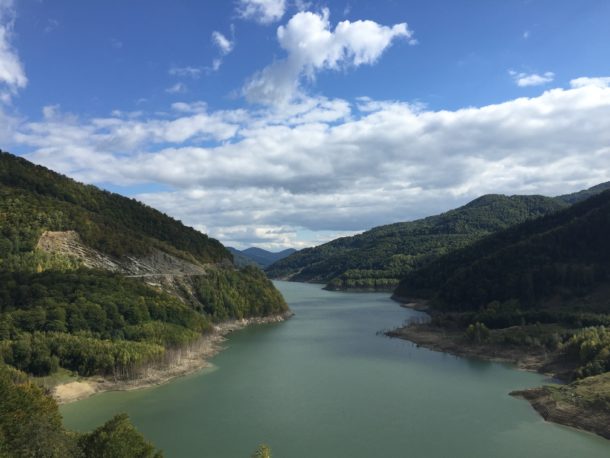 We woke to frost on the cars in the morning, so we decided to do a bit of admin before venturing out. We managed to book accommodation in Bucharest and do a few other bits and pieces. Our plans have changed once again and we have decided not to go to Galati because Serjo and Adriana who we were planning to visit were busy on Saturday.  They did suggest Sunday, but that would mean hanging around and we couldn’t find anything we fancied doing in their area, so we’re now heading in the general direction of Bucharest.

We have a good contact in Bucharest, Cristina – who is the sister of Diana, a Romian lady who I used to commute with back in the UK- got that?! When I was commuting to Bedford, Diana was on the same train each morning and as we were both cycling at either end we naturally got chatting – I think our bikes were practically married! We talked about this trip during many hours of commuting and had she not been taking professional exams at the minute she would have joined us in Romania to do some cycling.  So, instead she has enlisted the help of her sister, Cristina, as a quasi tour guide for our time in Bucharest,  as it’s always good to have insider knowledge.

Anyway, by the time we’d sorted out our admin the sun was above the hills, the frost had gone and it was still only 9:20 – so already a productive morning. We were out onto the the same road as the previous day in the direction of Buzau about 80km away. Glorious sunshine and yet more spectacular scenery in the form of low hills which slowly flattened out as the day went on. 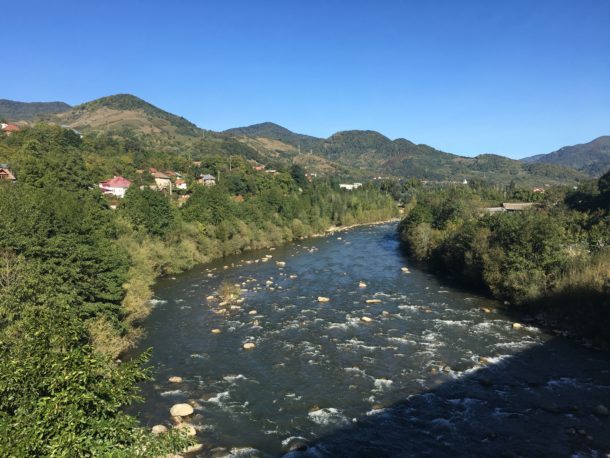 We stopped in Magura for a daily menu of soup and meatballs whilst looking over a valley, which was very nice… 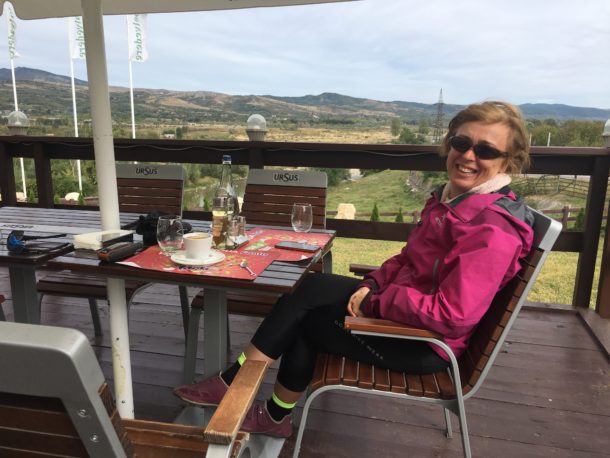 Then it was the last leg into Buzau. After all the really nice places we have been to recently Buzau is a bit of a shock to our systems – rundown concrete blocks everywhere and a centre of town which is less than inspiring. Other than a beautiful old town hall and a couple of nice large churches the rest is all crumbling concrete. It also looks like a very poor area.  We have a room in a house near the centre for the night and although it’s fine I think we’re both rather glad it’s only for one night.