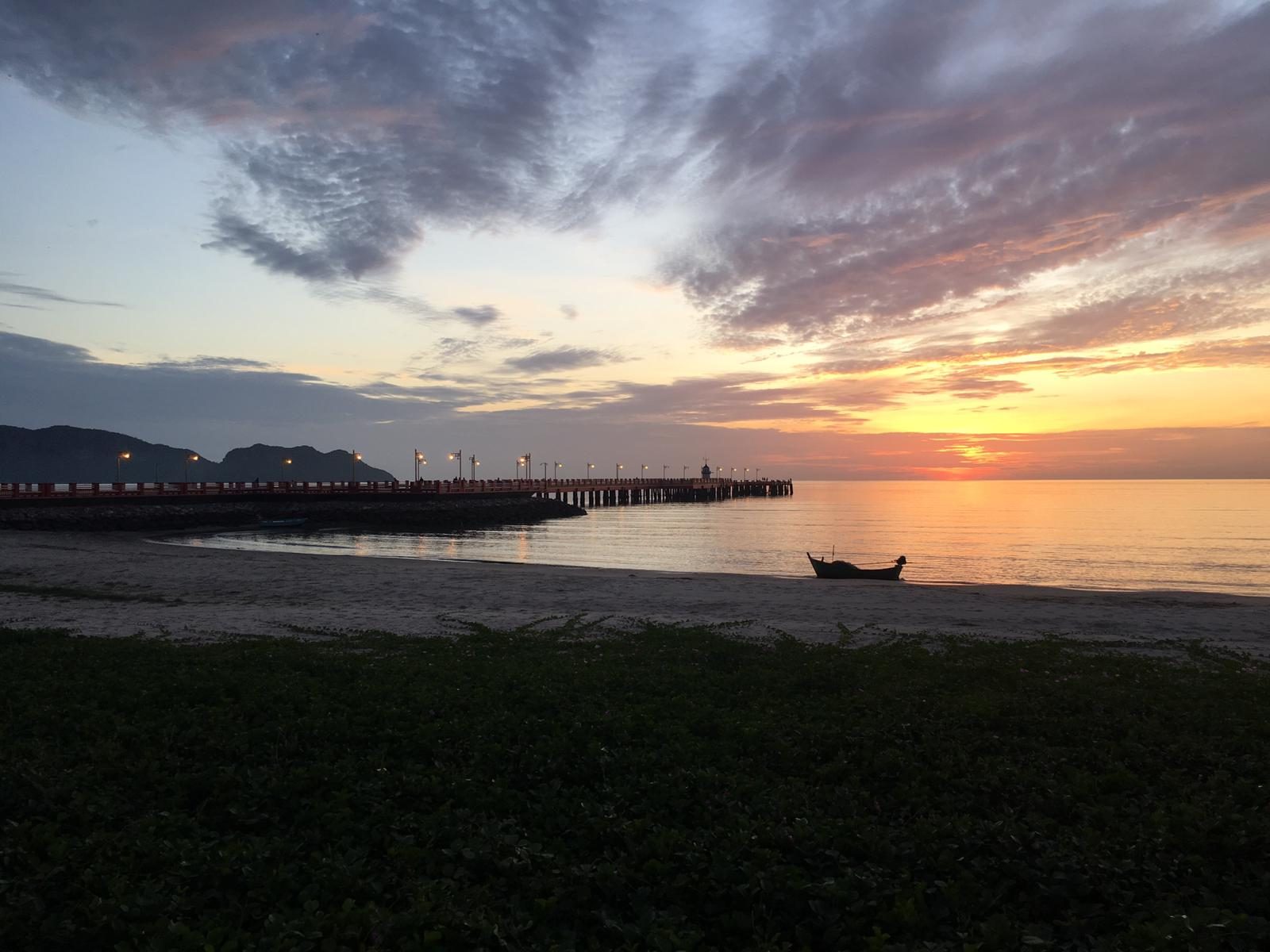 It was on our 5km ride across town to the train station that we realised that the mechanic hadn’t done as good a job on the bikes as we initially thought ……the crank bolts (the bolts that effectively hold the pedals on) on both our bikes were loose, which could have had pretty serious consequences had they come undone while on the move.  And Nigel’s brakes weren’t properly fixed either, so we weren’t in the best of moods when we got to the train station to start our adventure south. The reason we were taking the train was to make up some time from when I had my accident in Vietnam and needed time out to recover, so Prachup was our chosen destination that would also give us enough time to get to the bike shop in the south to get final repairs sorted.  And a quick update on my health… I am glad to report that apart from a few scars where I had stitches I am fully recovered, which considering it was only 5 weeks ago is good going! Back to our trip…..we were third-class passengers as that was the only option offered to us when we bought our tickets, so even before we left Bangkok it was a hot sweaty affair as the carriage only had only a few fans in operation.  But thankfully it was drama-free getting the bikes on as they had a special cargo carriage.  We weren’t too crammed into our seats, we were on the shaded side of the train and as seems to be normal here the windows were wide open so with the fans going it seemed bearable for the 5.5 hour journey.

At first the activities on the train were fun to watch…..the hoards of traders getting on at every stop …..selling everything from handbags and purses, fans, smelly fruit, cooked fish, iced drinks. You name it, they had it….it was reminiscent of our boat experiences in Bangladesh and Myanmar – great fun to watch…for about the first 20 stops. Then it just got annoying! Engineering works along the entire line meant the train crawled along so the journey seemed to take forever – and this was the express train!  We eventually arrived at our destination about two hours later than planned, which was just enough time to get something to eat, shower to wash the grime of the day off and bed!

Nothing like a 5am start to get us back into the swing of things again, but as we hadn’t had a chance to see anything of Prachaup on the way in last night we decided we would take a quick ride through to have a look before we left as we were excited to be back along the coast again. And we were so glad we did because we got to see the pier (how very European) and this sunrise….

The cycling, when we set off, was lovely and mostly on roads lined with palm trees – even the part that took us along a main road. Very tropical!  Our bikes took a bit of getting used to as we have transferred some weight from the back to the front panniers to preserve our back rims so I definitely felt a bit wobbly at the start, but soon got used to it. The Thai drivers are very nice and considerate to cyclists and there was even a designated cycle lane for part of it so all-in-all it was really enjoyable.

We met a couple of Belgian cyclists en route – Pierre and Fanny – so stopped for a chat.  They had been given fruit by locals along the way so they generously shared them with us…and some of it was new to us such as this one….

It’s called Lang Sat and although it looks like a small potato it has soft flesh with no stones and tastes like a mild grapefruit.  Yummy!

We got to our destination around 1pm – a home stay in the middle of nowhere, which effectively had its own private beach.  Not bad for £12 for the night, even if the bathroom had a mosquito net as a window and 2 separate shower heads for hot and cold water!

So after a quick bite to eat we took advantage of the beach and headed for a swim.  The water was so warm it felt like getting into a bath, although surprisingly not as clean as it was in Vietnam.  It was still a nice way to relax after 110 sweaty km!

Although the temperature has dropped quite a bit and it’s less humid since arriving in Thailand, the sun is definitely stronger even when it isn’t shining so we absolutely have to wear sun cream or risk getting burned.  And the evenings are notably cooler…..you know your have been in Asia for a while when 28 degrees feels cool!

After such a big day on the bikes we were ravenous so we shared 4 mains for dinner.  Gotta keep our strength up!

Got up early to see the sunrise on the beach but as it was mostly hidden behind a large cloud, so we didn’t hang around long.  Back on a cycling path along a nice tropical route called the Royal Coastal Road, which gave us more lovely palm trees…..

There were quite a few hills that we hadn’t expected, but thankfully the bikes behaved and we had no problems.  But I couldn’t say that about dogs….we were constantly chased by packs of them and it wasn’t the feral ones that were the problem.  Although there were loads of them roaming around it was generally the domestic dogs that would come running at full speed out of nowhere to see us off.  More irritating than frightening – at least for now!

We also came within 20km of Myanmar on today’s travels, which seems bizarre as it was the first SE Asian country we visited all those months ago.  Not that we could cross from here as there is no border crossing, but still it was strange to think we were so close again!

We arrived in Chumphon around midday and had a complicated faff for about 1.5 hours because of an error with our online booking. Well it was Friday 13th so maybe we should have expected something to go wrong….but it wasn’t catastrophic and it eventually got sorted so all was well in the world again.

We had been in touch with a local bike shop that we hoped would fix the issue with my bottom bracket bearing as that was slightly more critical than the cracked wheel rims, so after a quick lunch we set off to find it.  Within 15 minutes the lovely chap had fixed the knackered old bearing and I was back to lovely smooth pedalling.  Hurrah!

There was obviously more to Chumphon than we knew about before arriving as there were quite a few westeners around, but other than an excursion for dinner (only 3 main courses tonight!) we didn’t see much of it.  We decided we’d had enough excitement for the day so it was House of Cards on Netflix and an early night for us.  What a truly rock ‘n’ roll lifestyle we lead!

We set off in rain this morning, which lasted for about 60k.  But considering it is rainy season I think we have gotten off pretty lightly with the amount of rain we had to be honest – it really hasn’t been that bad! Although we have our waterproof gear we don’t even bother with it as it’s too hot and sweaty.  The rain is warm so we generally just cycle through it and only when we stop that we feel cold so we don’t stop for too long.

Our journey took us mostly along a busy main road with loads of trucks and fast traffic so it wasn’t our most enjoyable day.  But we did come across this rather large Buddha along the side of the road….not something you get to see every Saturday morning!

We also came across this guesthouse, which was bizarrely decorated with union flags.  We’re guessing he voted Leave …..!

We encountered chasing dogs again and one poor unfortunate dog that ran across the road from the other side to chase us got hit by a speeding pick-up truck.  It was pretty horrific actually as it happened right in front of us….the lovely big springy beige dog was hit so hard that he was catapulted into the air and spun around a few times before hitting the road with a thud. The impact on the truck was pretty hard as the front bumper came off completely, but the driver didn’t even brake – just kept going. The one good thing is that the dog obviously didn’t suffer but it wasn’t the nicest thing to see – or hear for that matter, so it did put us a bit of a downer for a while.

Our destination was a home stay in a fairly remote location.  We had called ahead to book and although the lady didn’t speak great English she spoke enough to understand that we needed a room for two people for the night.  And what a little paradise it was! Set in the middle of a tropical forest we were the only guests there so we had the complete run of the top floor to ourselves. (You can see a little Nigel on the balcony in the photo).

They were a really lovely welcoming couple who brought us a basket of fresh lychees to gorge on in the afternoon ….

….and they even had a much-needed washing machine ….oh the simple things in life that make my day!! Mind you, at this stage some of our clothes are beyond washing – no matter how much powder we use we still can’t get them to smell clean!

Our afternoon and evening were very relaxed.  We had a delicious home-cooked dinner served in our upstairs quarters while listening to the family and their friends chatting and hanging out listening to music in their cool living area below us.

They even played a bit of Rod Stewart and Boyzone, which we think was for our benefit!

One of the exciting bits of our journey involved me shouting “Snake!” as a long snake slithered a few centimetres in front of Nigel’s bike.  Nigel had to swerve to avoid killing it and off it slithered into the ditch completely oblivious to the excitement it had just caused!

Having covered 98km we arrived at our guesthouse just after 12.30pm just before the heavy rain set in. We even managed a Tesco shop along the way! (I still can’t get my head around saying that when we are in Thailand).  Thailand is the only SE Asian country that seems to have a weekend as we know it and lots of businesses close. Even Bangkok was pretty quiet last Sunday. Coming into Surat Thani we noticed there weren’t many shops open and when we went looking for dinner in the early evening there was nothing available near us other than a street vendor serving pork noodle soup.  We had a bowl each and still feeling hungry we decided to take a tuk-tuk to the night market in search of more food…..

..and we are so glad we did as it was a right food fest, serving everything from fried bugs to sausages.

Despite the rain it was full of locals eating and buying food to take away so we got stuck in too.  We indulged in an unusual pad thai dish…

and Nigel followed that with a chicken biryani-style dish.  Both were delicious. We even got a take-away omelette and rice for breakfast in the morning. Nothing like making the most of an opportunity when it presents itself!