New-found fame on our way to Pune! 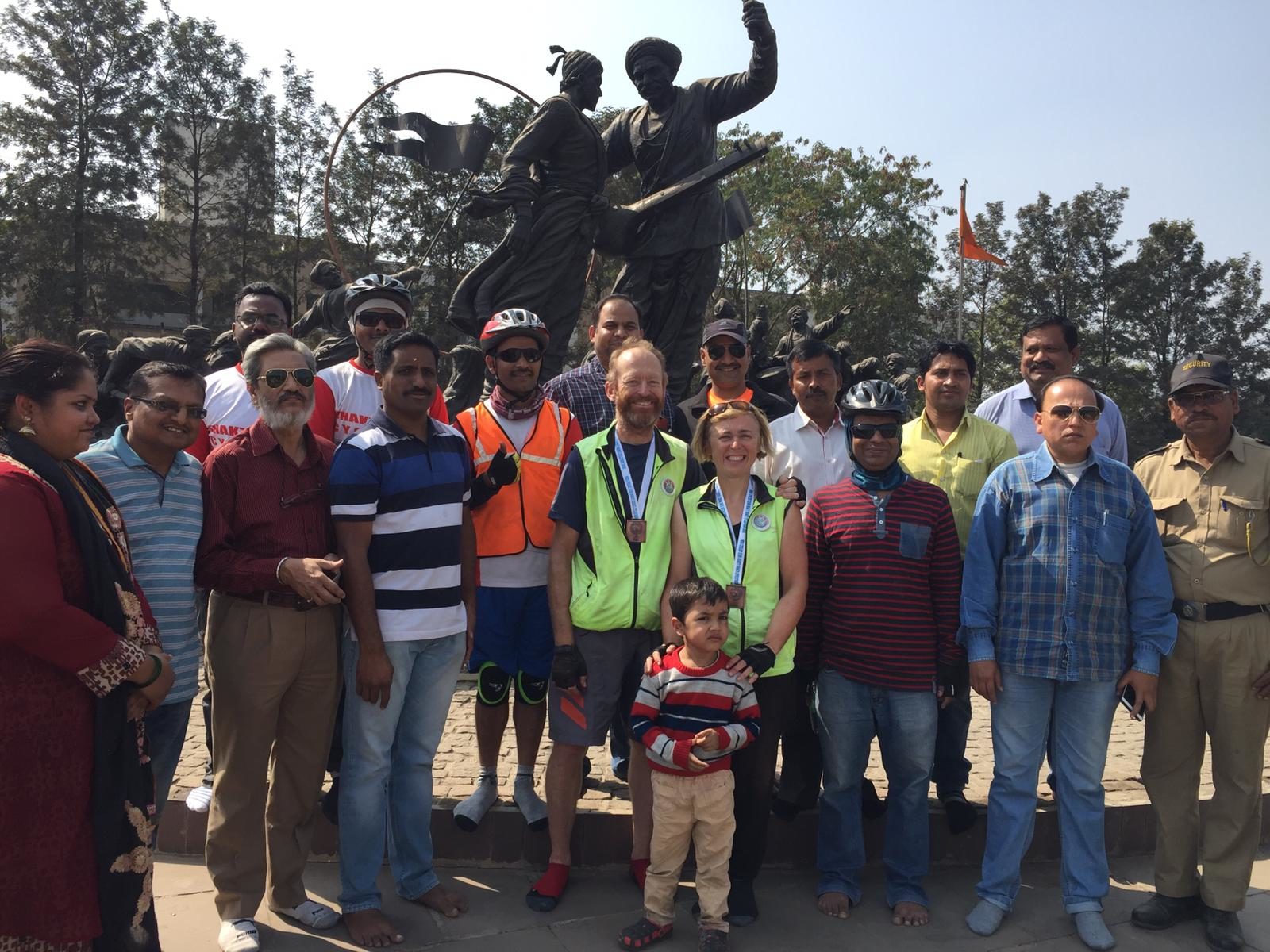 So, after our impromptu beers last night the 6am alarm this morning wasn’t welcome at all! After fighting the traffic on the way into Mumbai we’d decided on an early get-up in the hope that we might have a bit of an easier ride on the way out. We breakfasted, packed and were out by about 7:15.  The traffic was indeed nice and light, so the first hour-or-so was almost pleasant. It was still very smoggy and misty, so we didn’t really get to see much of the city on our way out – a bit of a shame really because some of our route was on an elevated section of road.

We are heading southeast towards Pune, which meant initially going north through Mumbai, across a bridge into Navi Mumbai and then southeast through suburbs out of the city.  As we neared the bridge the traffic intensity rose and it stayed like this for the next 35km; in fact we’d covered about 65km before we really got out of the city properly – it’s a seriously big place!

The next section of the cycle was uneventful and if we’d been able to see through the hazy smog the scenery might even have been quite nice! We did see what we think are pilgrims walking in groups with flags along the road throughout the day. Perhaps they were going to see this chap that we saw at the side of the road… 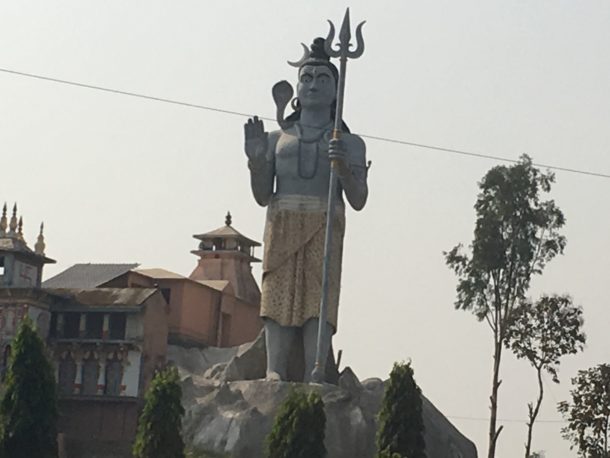 The ride was going well until we reached Khopoli, which is at the foot of a climb and a pass (Bohr Ghat) that Anil in Mumbai had mentioned to us. We’d already covered about 88km, so a climb wasn’t really what we wanted at this point of the day, but hey ho we wanted to get to Lonavala, which was just the other side of the hills. Off we went and seemed to be going okay, but then it all got very difficult. The road was steep, but no more so than what we experienced in Slovakia, Norway or Bulgaria, so it should have been fine. However, we had to keep stopping, which is very unlike us. We then decided to walk for a bit, which can actually be harder than cycling when you are pushing a fully loaded bike, but we felt we had no other choice, so we started trudging up the hairpins. It was some way into this when I basically konked out. Even pushing the bikes was exhausting me and we had to keep stopping and starting over and over again. The picture shows me at the top when I could finally get back on my bike – that’s a grimace on my face, not a smile. 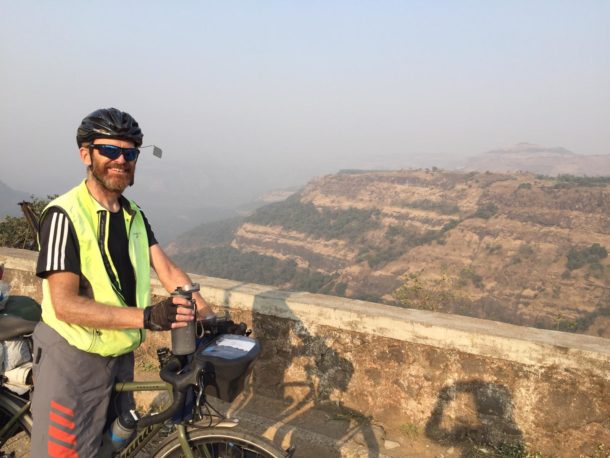 Our progress was really slow, but luckily we were near enough our end destination and we finally made it to Lonavala with daylight to spare. We found an OYO hotel fairly easily and booked in – I can’t deny it I was properly knackered!

Later on over dinner we discussed why this hill had proved to be such a problem when we’ve done harder ones in the past, and this time when we’ve just had two ‘days off’. But we think there were a number of possible factors: we did do a lot of walking in Mumbai after a stint of 12 unbroken days in the saddle. We’ve also had quite a few, what we now term late nights, past midnight when our usual bedtime has been between 9 and 10. We also reckon we’ve had a few too many congratulatory (‘we’ve cycled from Delhi to Mumbai’) beers in the past 5 days. We also contemplated that our change in diet to vegetarian Indian may have had an effect, but we aren’t convinced. I’m also fighting a cold and Martina probably is too.  Finally, it’s now into the low 30s temperature-wise, which we should really be used to, but we did sweat a lot. It may even be a combination of some or all of the above. Though it was a big day with a big hill at the end it shouldn’t have been a potential problem, so this is a learning point for us – we were in bed before 9 tonight!

We were still fairly tired from the day before when we set out and through the town there were a few early hills for us to climb, which I can’t say we made look easy. Though we only passed through it the town looked nice – there’s a few things to do in the local area, for example some caves to visit, so it is a little touristy. Lonavala is also famous for chikki, which is a nut and jaggery (similar to sugar) brittle sweet, so there’s loads of places selling it. We only found out after we passed through what this was otherwise we would have stopped and bought some. It is available all over India, but apparently Lonavala is particularly famous for it.

About 10km East of Lonavala we met Govind and Dinesh, two local leisure cyclists. It is very unusual to see people India just cycling for the love of it (we’ve probably only seen about 3 in the 6 weeks we’ve been here), so we were more than happy to stop, have a chat and have a picture together. 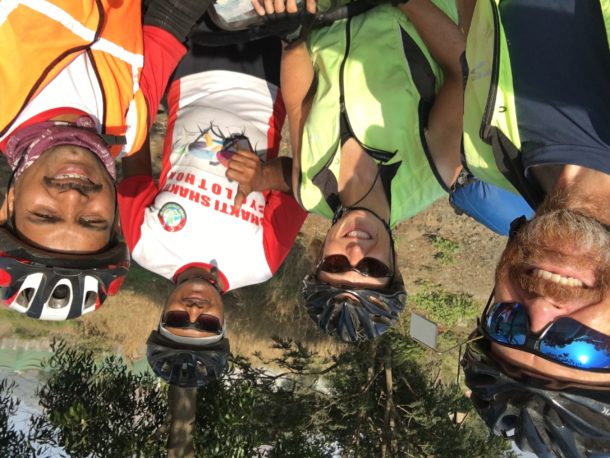 We parted our ways and about 20 minutes later they caught us up and said they’d ride a while with us, which was great and gave us a chance to chat more. They are both part of the Pune branch of the national Indo Cyclist Club (ICC).  We had a chai and water stop which Govind kindly paid for and then we were off again as they said they’d stay with us into Pune. It was really nice to have travelling companions for a while. Govind was on the phone calling a ‘couple’ of friends who wanted to meet us on the outskirts of Pune – sounded great. Little did we know that the ICC Pune branch grapevine had been activated, so when we turned up there were about 20 members and some of their families to greet us! 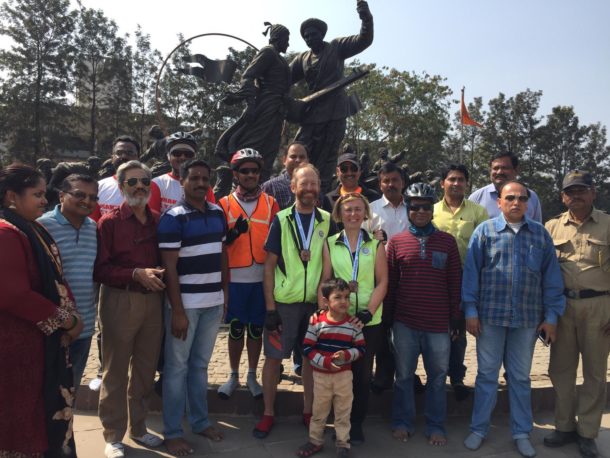 We were ushered into the park of the Statue of Shivaji Maharaj and Sant Tukaram (local heros) for a photo shoot – a park that is generally closed until early evening but they opened especially for us! Govind introduced us and the Chairman of the club welcomed us to India and Pune, where incidentally the fastest Asian woman to recently cycle the globe (159 days unsupported) comes from.   We were presented with a trophy, medals, cycling shirts and badges – all for our “contribution to sport changing the world”.  We were quite overwhelmed! 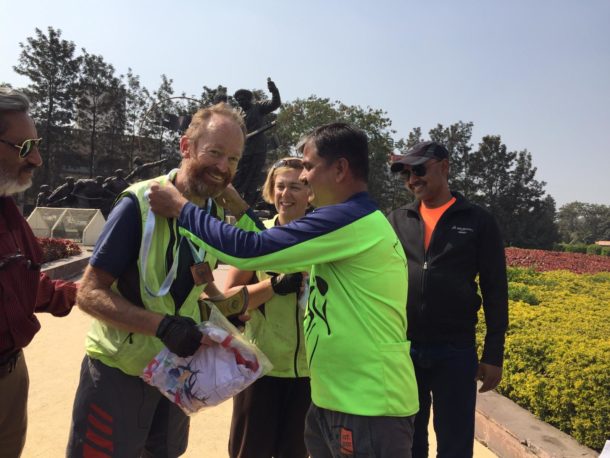 We were then asked to say some words about our journey and were suddenly in the middle of what felt like a press conference as everyone was filming us on their phones! Really good fun and it was so nice to meet so many like-minded cyclists. We had a question and answer session and we were asked what our mission statement was – we made it up on the spot as we don’t really have one and said that ‘Our mission was to explore the world from the back of a bicycle’, which everyone seemed to like. The club’s own mission statement is to raise the awareness of leisure cycling – “Let’s pedal for Health, Environment and Fun.” 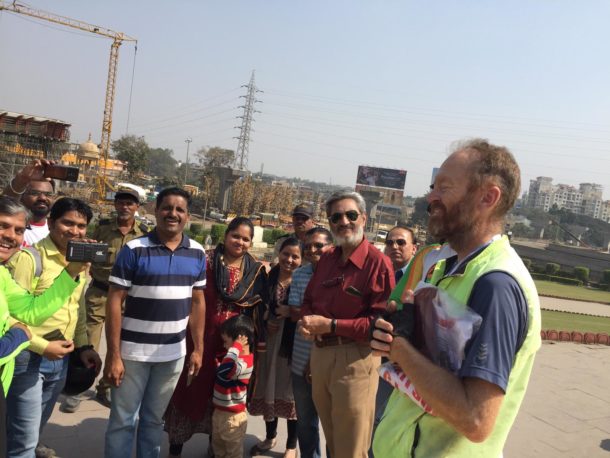 We were then invited for lunch and so we cycled to a nearby restaurant where we had a great meal, which was very generously paid for but one of the members.  Martina wrote what was a sort of press release so that the club could put us in their local paper – apparently we will be world famous in Pune!

Dinesh then led us through Pune to our Buncrana/London friends’ Margo and Jatin’s apartment where we will be staying for a few days. We were welcomed at the door, unloaded our stuff, put the bikes to bed and the had a chilled evening chatting over a beer or two (perhaps our lesson hasn’t been learnt yet!). We also did a photo call with our new ICC cycling shirts… 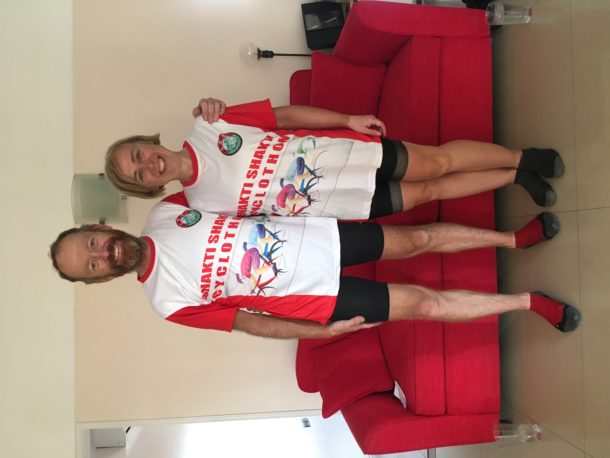 So, for the next few days we are staying with Margo, Jatin and their children Conor and Mina in Pune and here’s a quick précis of what we have done so far…

We ate some paan – traditionally this is a tobacco leaf-based thing that people chew, but recently, in some cases, the tobacco leaf has been replaced with betel leaf. The leaves are filled with ground seeds and other things, folded and held together with a cocktail stick. You put the whole lot in your mouth (minus the stick!) in one go, chew and eat. There’s loads of different types with different things in them and in many cases they are dipped in chocolate! There were definitely some strange combinations, but we did specifically like the ‘original’ Kolkata version… 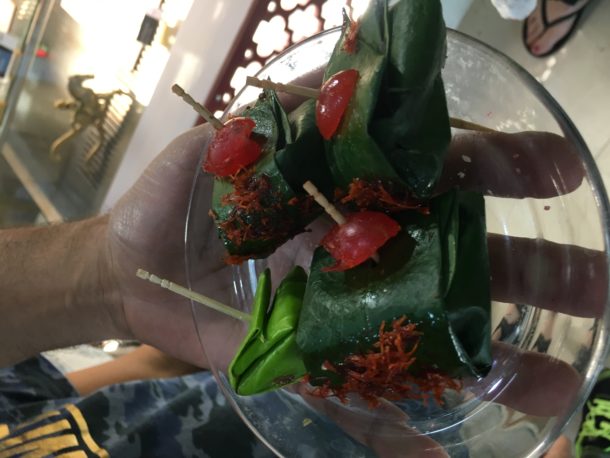 We also tried sugar cane juice (very refreshing!) and Martina had coconut water with Mina and after finishing the juice ate the flesh inside the nut (I have never been a huge fan of coconut, but I did try it again here – still not that fussed to be honest!)… 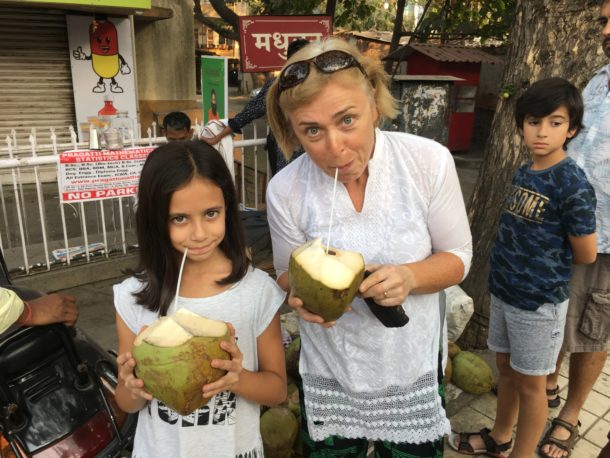 We had a lovely dinner out with the whole family… 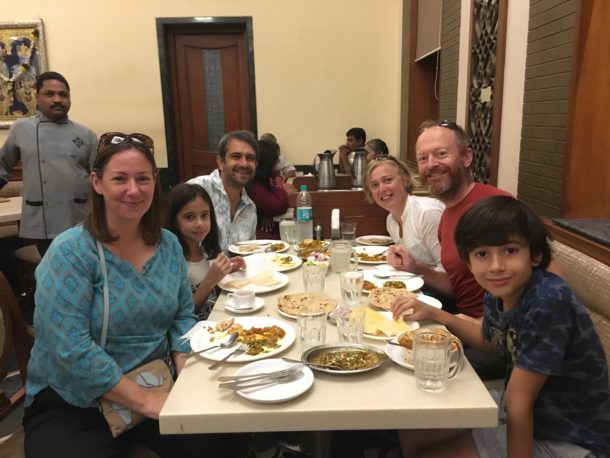 And played a lot of cricket… 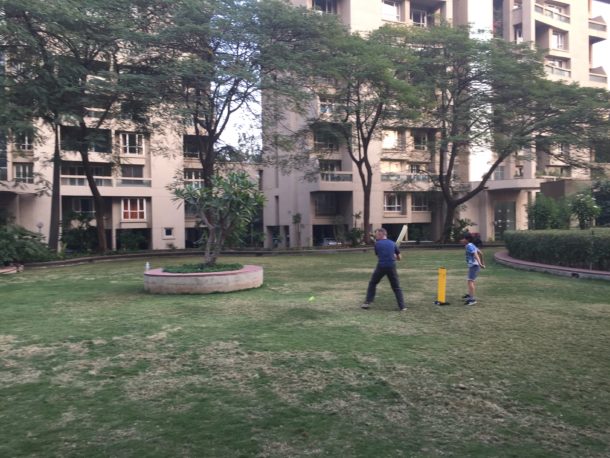 ….although believe it it or not, cricket isn’t actually India’s national sport –  it’s hockey!

And we have chilled out a lot, which was just what we needed! Initially we had intended to be here for 3 nights but have extended our stay somewhat. As I mentioned earlier I have a head and chest cold and Martina is feeling a bit under the weather – possibly fighting the same lurgy. This might go some way to explain why we struggled so much with Bohr Ghat.

Margo and Jatin have been so hospitable to us and have said that we can stay as long as we want – though they know we will have to move on sometime in the near future as our visas run out at the end of March! So, we’re taking this opportunity to recuperate and will be moving on very soon.

A note of interest that recently learned – India’s current Prime Minister Narendra Modi seems to be very popular with nearly all of the people we have met here. We also think that he comes over very well from an outsider looking in point-of-view. Some of this may be due to his humble beginnings – as a boy he was a chai seller at the side of a road. He’s never married and has devoted his life to making India a better place. To most people he’s been a breath of fresh air in comparison to previous PMs.