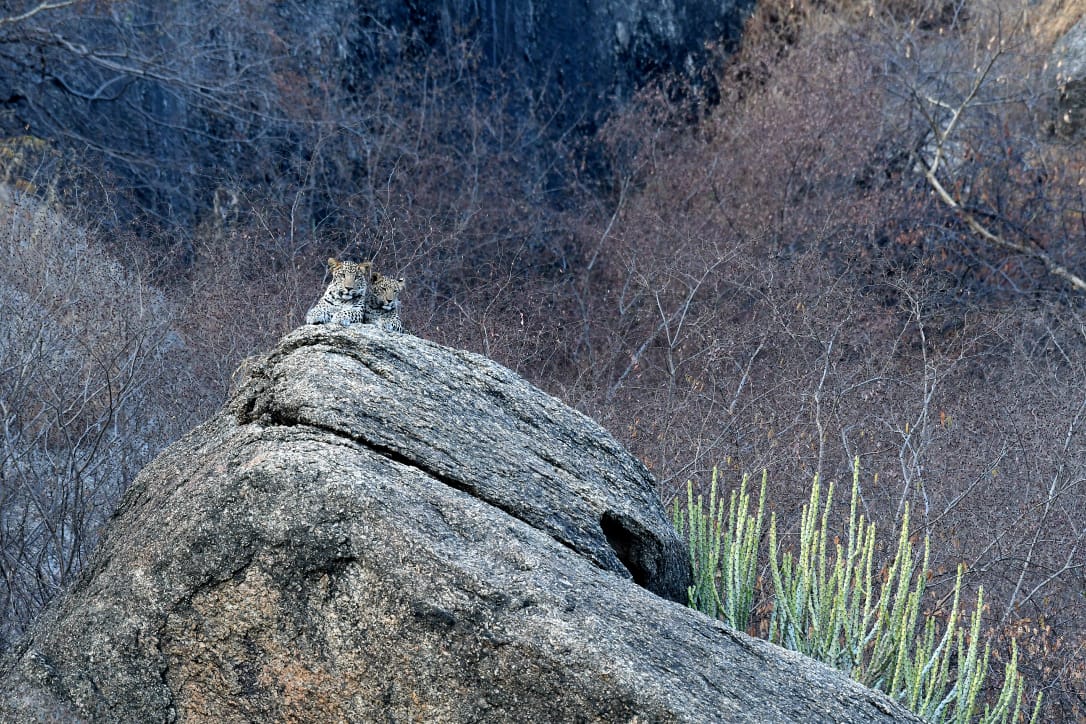 We were up fairly early the next morning, had yet another fantastic breakfast from KP and his staff followed by a photo session with the other guests before heading off. 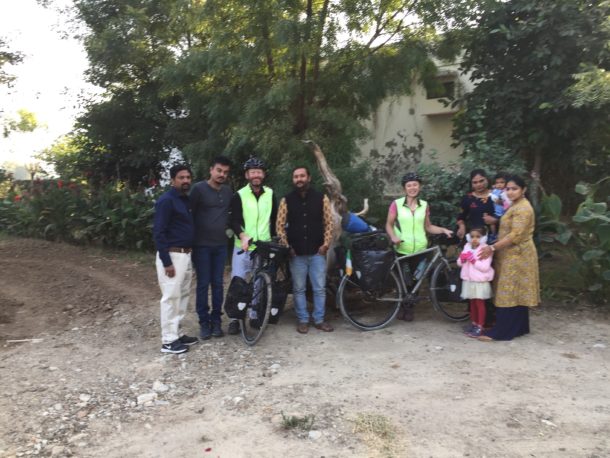 The road continued to be interrupted by roadworks so our progress was rather slow, however we made it to Bera, where Leopard’s Lair is, just past 12pm. The town of Bera itself is a bit of a dump to be honest and we had a 15 minute faff trying to fine Leopard’s Lair as it isn’t signposted, but we finally got there!

This was our Christmas present to ourselves…two leopard safaris and an overnight stay in a great little cabin with meals included. We arrived in time for a very nice lunch which we took outside…. 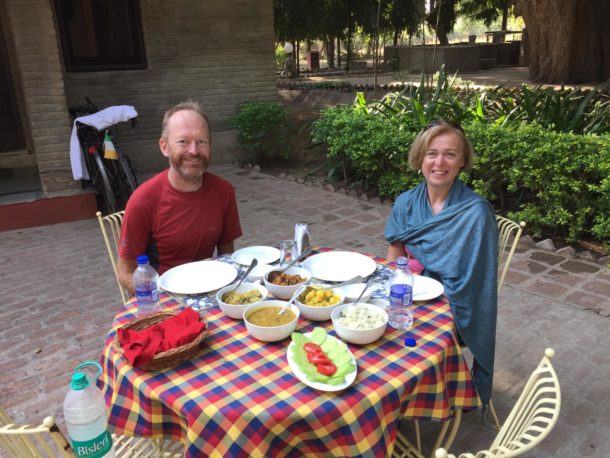 ….and then had a snooze before the first of our safaris.

The boss of Leopard’s Lair is also a guide and he was the one who took us out in his jeep. The leopard area is outside the town on the road we’d come in on. However, we were quickly off this and onto tracks in the scrubland. A bumpy ride took us to an area where he’d seen a leopard that morning, so we parked up at a suitable viewing point. We waited about 30 minutes before a female made an appearance about 100m away on a craggy bit of rock. We had a prime view of her, through the provided binoculars, as she chilled out under a tree and we were the only ones there for about 15 minutes. 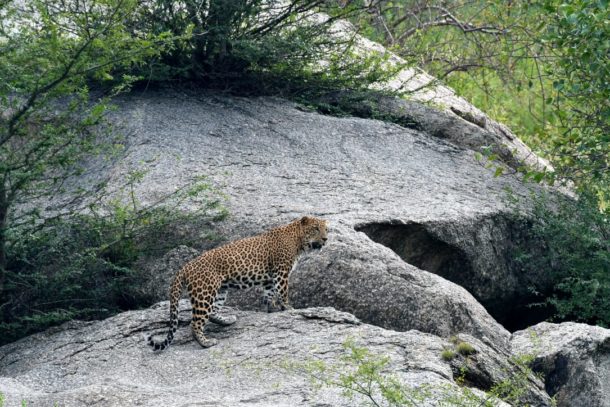 We were soon joined by another couple of safari jeeps and the leopard was joined by her two 1.5-month-old cubs. Great viewing as the cubs played and the mother kept an eye on them. We had at least an hour’s viewing of them in total, toward the end of which another 3 safari jeeps turned up. Until that point it had been tranquil viewing, but the calm was broken as these jeeps we full of very loud people determined to break the peace! The leopards didn’t seem to mind either the sound of the jeeps or the loud talking, but the light was fading fast by this point and we lost sight of the cubs and the mother sat behind a tree! The other jeeps departed but we remained until it was completely dark and used the Jeep’s headlights to see if we could see their eyes but to no avail….but it was an amazing experience and we were both buzzing afterwards.

We had a very chilled rest of the evening of dinner and then a couple of Christmas Eve beers around an outdoor campfire.

Christmas morning we were up at 5:30 for the second of our safaris – it was pitch black and very cold when we left. We headed to the same spot as the night before and watched as the sun came up. This time the leopards stayed firmly out of sight so our guide took the jeep to other likely viewing spots, but again no luck.  Some of the other safaris were present again and one had spotted the leopards very briefly nipping into a cave. Our guide believes that the mother made a kill overnight and the sighting was them all retiring to digest their food, so our chances of seeing them disappeared. We didn’t mind too much as we’d had such a good sighting the evening before and seeing the sun came up on Christmas very special in its own right.

We returned to camp for breakfast, loaded our bikes and we were off to Ranakpur, our destination for the day, by 10.30.  We arrived at our accommodation about 3pm, unloaded our bags and took ‘naked’ bikes to Ranakpur Jain Temple, about 6km up the road. It’s quite a tourist and pilgrim draw around here as there are loads of hotels, resorts and restaurants. The temple was built about 500 years ago and is pretty impressive in white marble and pictures don’t really do it justice. 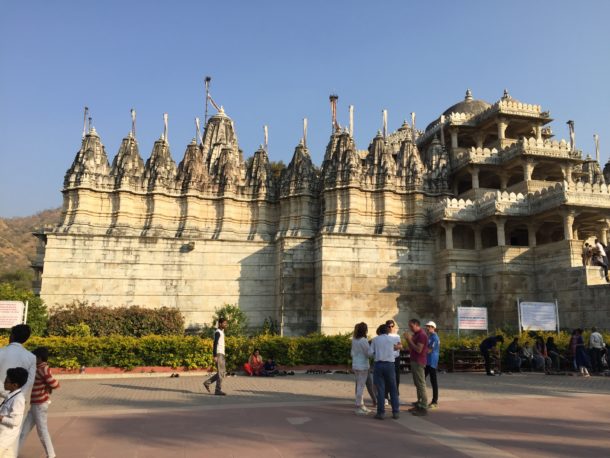 We took an audio tour which told us about Jainism, which we initially thought was part of Hinduism as Jains are part of the caste system. We were wrong, Jains don’t believe in an all powerful god but in a force that joins everything together (sounded a bit Star Wars to me!). It was very interesting though and described how, amongst other things, Jains shun attachment to physical things. In their journey towards a nirvana they rid themselves of possessions. What we found difficult to understand is that in the caste system they are known as astute businessmen and can amass lots of money. We can only assume that they donate it all to their cause. One rather annoying aspect was that we were blessed twice, once by a monk and then by the temple’s high priest. Each time they asked for a donation – other religions also ask for donations, but we felt that we’d rather been pounced upon here in order for them to get it – we’d rather have the choice – and it didn’t seem very Jain-like to us that they were so focused on money!

We retired to our guesthouse accommodation and as they were only serving the same food we had had for lunch we decided to give it a miss and have an early night as it had been quite a long Christmas Day. The WiFi and 4G wasn’t great so we couldn’t ring home, the shower wasn’t working and there was a bit of homesickness going on so an early night was the best solution to that.  We don’t consider ourselves to be Christmassy people, but we felt we were missing out!

We knew that the journey from Rankapur to Udaipur involved some proper hills and a distance of 95 – 100km, so a hard day was forecast. So we were up, breakfasted and on the road by 7:30 to give us the best chance of getting there in daylight. We’d not originally planned to go to Udaipur as we felt we’d seen enough forts and palaces in the other towns we’d been to recently. However, we had another motive: Margo, Martina’s friend from Buncrana, her husband Jatin and two children, Conor and Mina moved to Pune about 3 months ago. Jatin’s work had given them the opportunity to live here for two years and over the Christmas break are touring Rajasthan. By coincidence we were in the same place at the same time and Udaipur provided a great meeting point.

Straight out of the guesthouse and we were into some seriously tough hills – the roads were okay with little traffic and the scenery was pleasant if a bit hazy but hills just kept going …and we were down to about 8.5kph which meant we’d never get to Udaipur by dark. 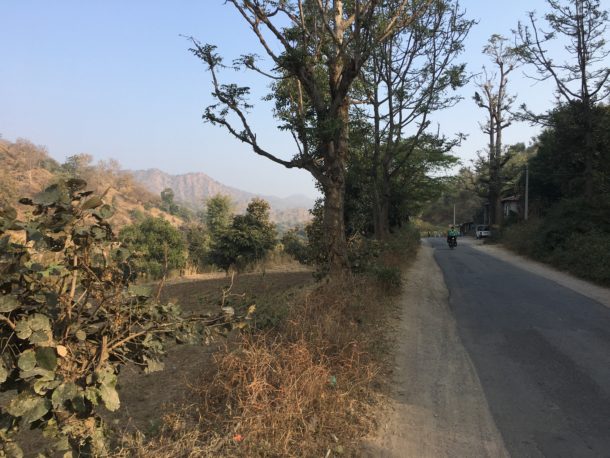 After about 3 hours things got a bit easier, but there were still some rolling hills to negotiate which were energy-sapping. We stopped for an early lunch after which there were some nice long downhills.  We even overtook a tractor at one point which was a great feel-good factor, though he did go past us again when we were going uphill! These downhills meant that we caught up some time and made it to destination by 3pm, which surprised us as we’d been so slow at the start. We sorted our stuff out, had a shower and were with Margo and Jatin by 6:30 and found a suitable place to eat. We then had a lovely evening catching up and sharing stories about our Indian experiences so far.  Martina even sported a Donald Trump hair piece!

Our plan is to see them again in Pune in about 2 – 3 weeks time. It was a bit of a late evening as we went back to their nice hotel for “one more” drink.  Their hotel was definitely a lot posher than ours but it was reassuring to find out that even there they had to ask for their sheets to be changed when they arrived…so it’s not just at our basic accommodation that they don’t automatically change the sheets!We were back at our accommodation past midnight but seeing them gave us a nice lift after being a bit down the evening before and made it feel more like a proper Boxing Day!

We hadn’t planned to come to Udaipur, but since we were there we decided that we should make the most of it and stay for 2 nights so that we could at least have a look around. Margo and Jatin had toured the City Palace and been on a boat trip, both of which they recommended, so that seemed good enough for us. We went into the centre of town to the Palace and although we were there a bit late (10:30) the crowds weren’t too bad. We took the audio tour, which talked us through the Singh dynasty and their history – currently on maharajah number 54! One interest thing we learnt at the Palace was in relation to peacocks and we have seen a fair few of them in the wild whilst we have been here.  It’s a native species and their national bird, and we have even been woken up by their call. And in Indian mythology it is even thought they carry the embodiment of numerous gods…maybe that’s what’s calling us in the early morning! The Palace itself is pretty impressive and we really enjoyed our tour and we were quite chuffed that we went when we did as there was a massive queue out the door when we left. 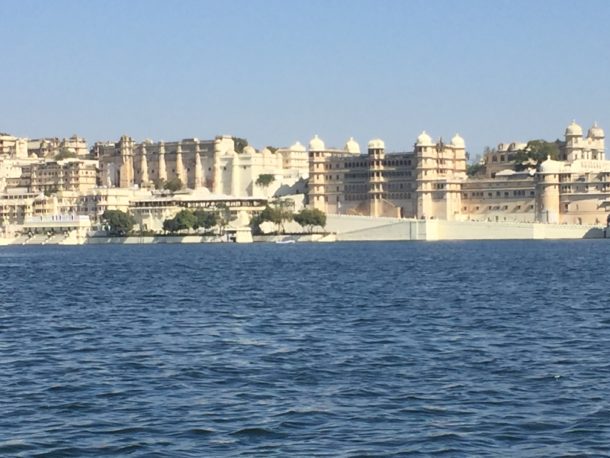 One part of the Palace is on an island on the adjacent lake Pichola so we took a boat trip to have a look around there. 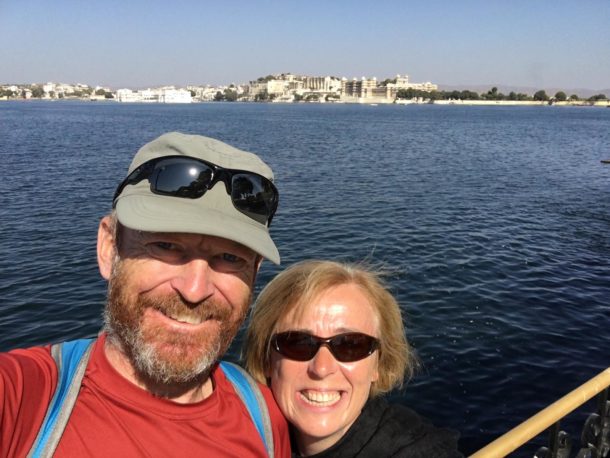 The gardens are lovely and the views of the Palace across the water were really nice, but the service at the cafe was rubbish so we missed out on a relaxing coffee break to take it all in!