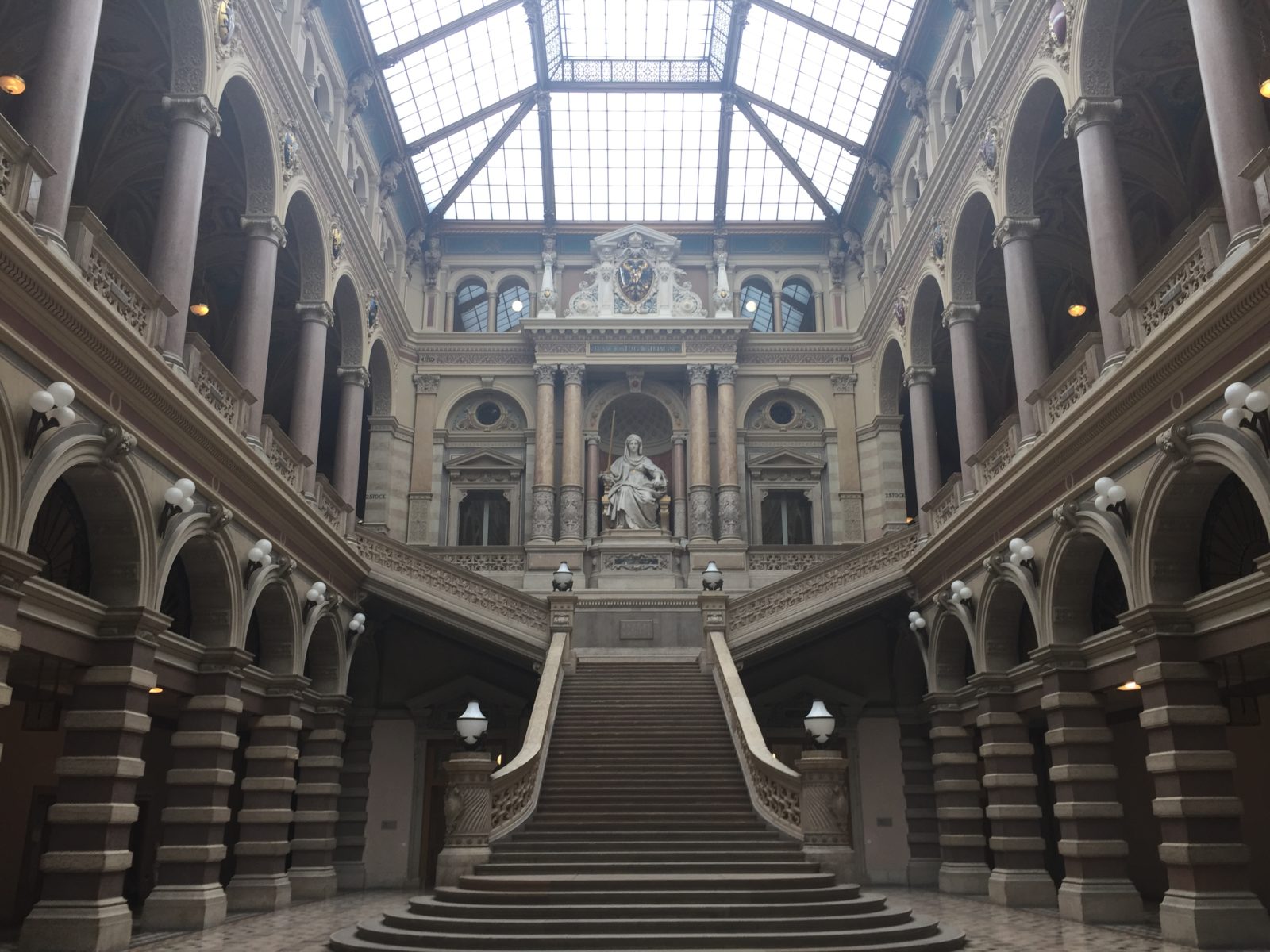 We exited the campsite after our super glamping experience and literally turned right onto the Danube path and we on our way to Vienna, humming The Blue Danube as we cycled.  It’s hard not to! Quite excited at the thought of another capital city as well as a few days off, and as Nigel said in his last post, it’s all very Western Europe so still has the familiar feeling.

Our easiest entry to a city to date – stayed on the Danube bike path right into the centre and then joined a smaller tributary with a bike path and before we knew it we were there.  This time our singing changed to Ultrovox’s Vienna, but to be honest I only know the “Oh Vienna” bit, but that was good enough.  Vienna – the city of the Wiener Schnitzel and endless cake and strudel choices!

Accommodation choice is AirBnB and it’s an apartment in an old townhouse, which is great…with one bizarre quirk.  The shower is in the kitchen….I kid you not! 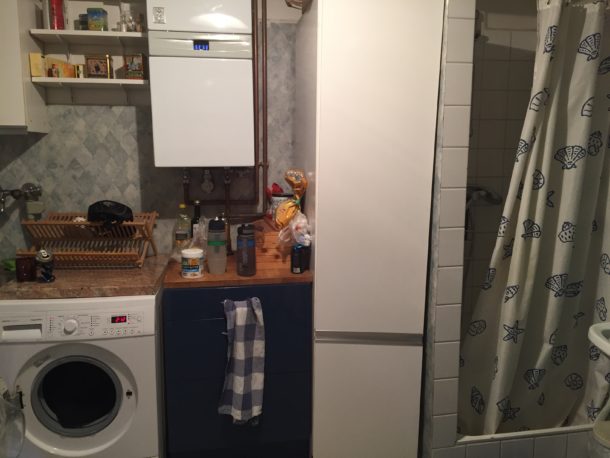 Slightly weird and gross, but that aside it’s a big apartment and it was great to be able to spread ourselves out for 4 nights and have some proper space.

The plan for Vienna was to take in the city, relax and catch up on sleep and chores, get some personal grooming and did I mention cake?!

Oh yes….In Vienna I discovered apricot dumplings, which I couldn’t find in The Czech Republic, and god they are GOOD.  We had 2 different types – an ice cream version and a hot pastry version ….and they were both amazing. We both agreed that ice cream version was probably the best desert we have both ever had! 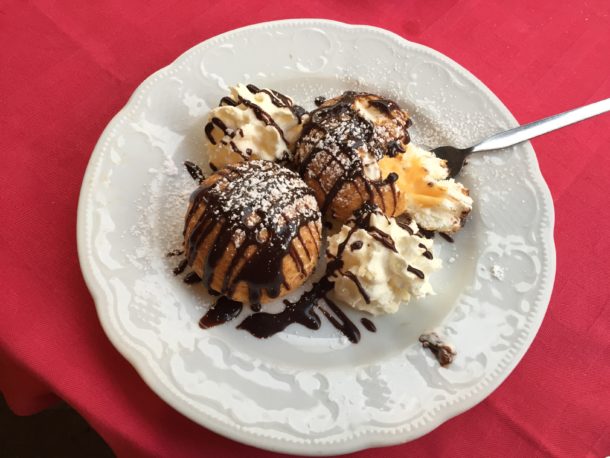 Apart from cakes and eating in general, getting haircuts and a beard trim (for Nigel I hasten to add!), other activities that we indulged in have included the obligatory walking tour, a visit to St Stephens cathedral and a brilliant but relatively unknown activity for tourists, that John the guy we met on our first night in Austria told us about…a visit to the the Palace of Justice.  The building itself is impressive (main photo), but the “canteen” where the judges and staff frequent for lunch is also open to the public, so we had a brilliant lunch there with fantastic views of the city skyline…and we were the only tourists there!

But the highlight of our trip for me was a string quartet concert in St Anne’s church, which was absolutely phenomenal – and that’s coming from someone without much knowledge or appreciation of classical music…until now that is.  Really amazing and as it’s a really small church there were only about 100 people there. Absolutely loved it! 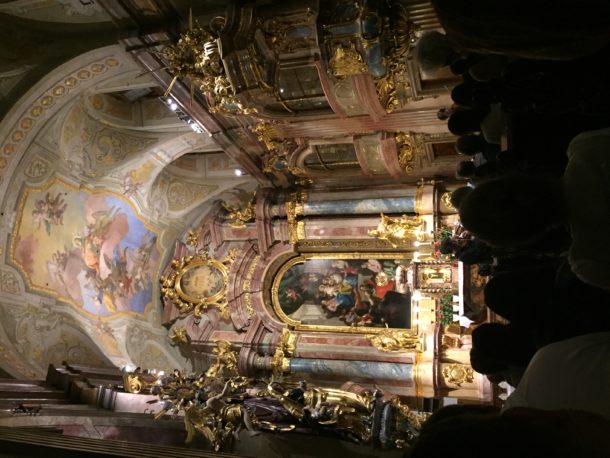 Overall Vienna is an amazing city…every corner you turn has another amazing building; you can never fail to be impressed. And we both said that from our short stay here, it’s somewhere we could both see ourselves living for a while if the opportunity ever arose; there is so much more of it to discover. 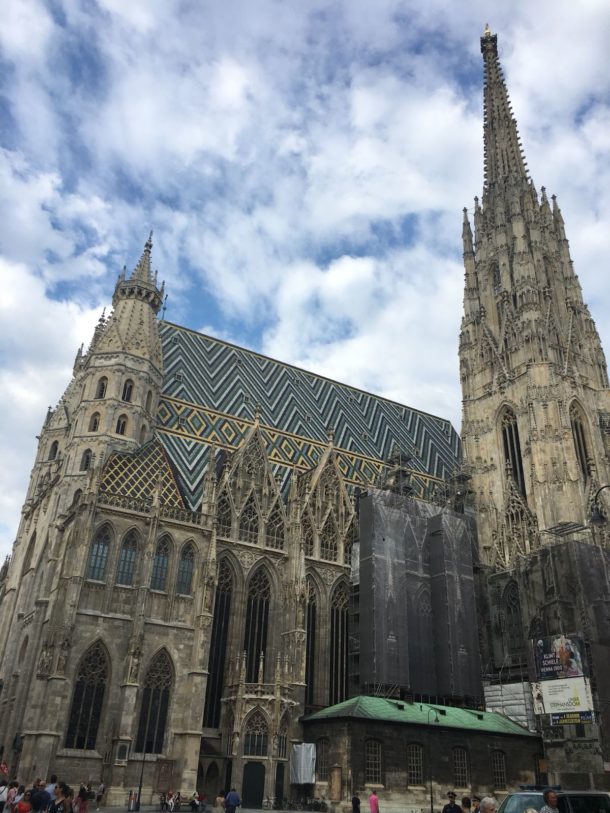 Tomorrow we cycle the 30km along the Danube into Bratislava for 3 nights – country number 10 of our trip – and then into the hills on Slovakia. So a quick round up of our 8 days in Austria:

1.  Probably the best food we have consistently had since we started out in April.  Every meal we have had in the country has been great…not just the deserts and cakes! Big hearty tasty meals that leave us stuffed – so it’s the perfect location for us to fuel up. We have eaten everything from Wiener schnitzel to beef goulash to black pudding …and more  – and all have been delicious. Service can be a bit rude/abrupt but that hasn’t detracted from the food at all. Not a country I would recommend if you are on a diet!

2. Transiting from Poland into the Czech Republic we noticed a marked improvement in the quality of the roads, but coming into Austria it went up another notch.  Easy pothole-free cycling on smooth roads, which has been bliss.

3.  Smoking in bars AND restaurants….and often the designated area is as you walk in so it’s hard hard to avoid.  Seriously what’s that all about?! But thankfully with outside seating we managed to escape the worst of it, but I don’t know what it would be like to visit here in the winter.  Itfeels very Ireland and England in the 1980s, which just seems very out of place, especially in a city as grand as Vienna.

4. Religious statues on the roadside are back….not as many as in Poland, but definitely a lot more than in the Czech Republic

5. We have seen fields and fields of thistles on our travels…that look like they are been grown as crops.  No idea what for, so if anyone knows the answer we would be interested to know!

6. The majority of adult cyclists don’t wear helmets, which in a country that seems to operate on rules and efficiency seems very surprising to us. Long distance cyclists are the exception to this.

7.  Viennese whirls are a British invention and nothing at all to do with Vienna….and we didn’t know that until we looked it up today when we wondered why we’d hadn’t seen any.