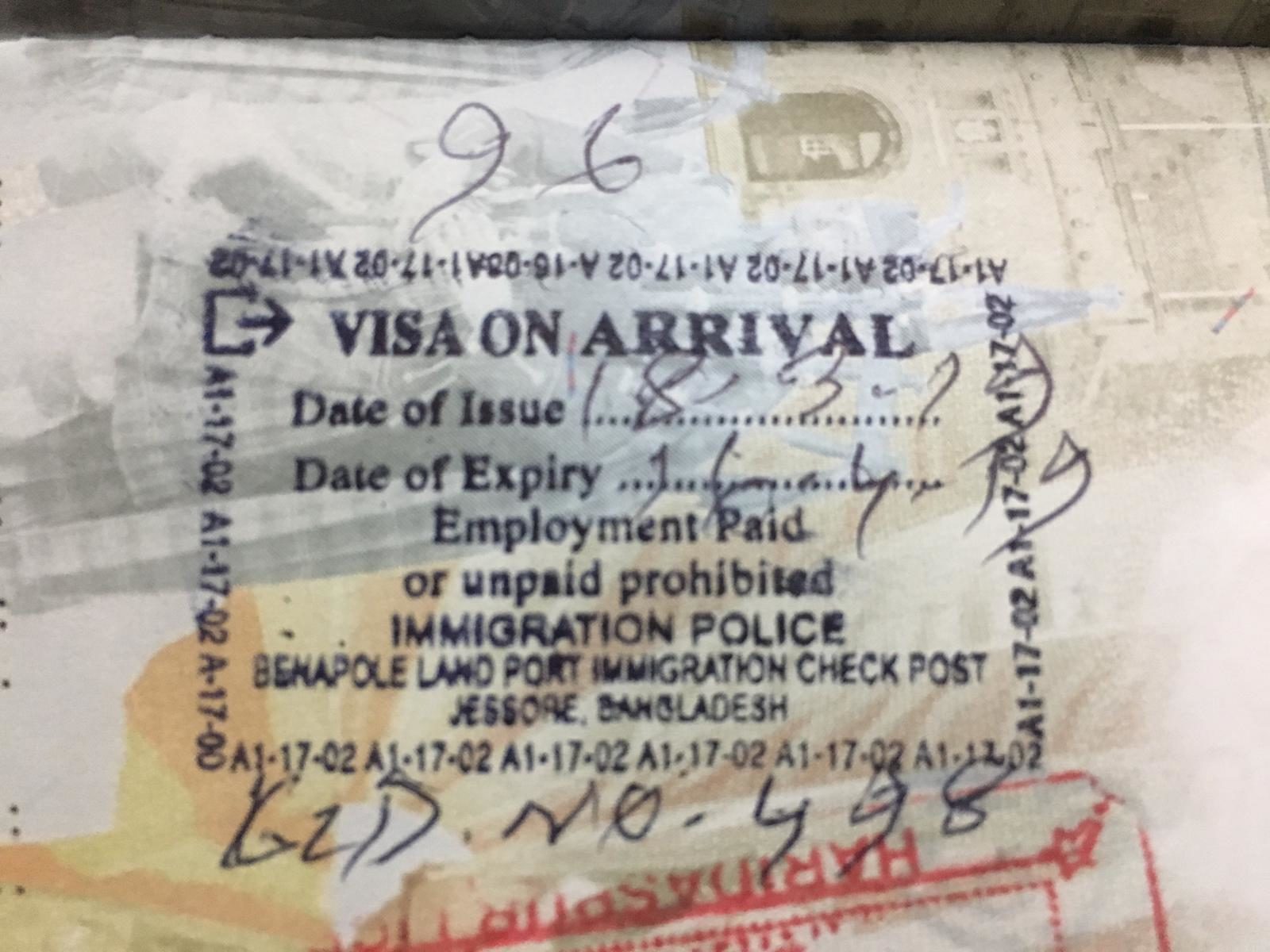 We crossed the border on bicycles from Petrapole in India to Benapole in Bangladesh using a Visa on Arrival (VOA). This border crossing is open 7 days a week on both sides.

We arrived at Petrapole around 7.30 am as we had no idea how long it would take to cross or what to expect. Exiting from India was pretty straightforward…we wheeled our bicycles through border control and had our passports stamped pretty swiftly.  A guard had pointed to us to leave our bicycles outside the building but we guessed that once we had our passports stamped we wouldn’t come back the same way so we ignored the advice –  and we were right to.  Once passports were stamped it was through customs and then onto the Bangladeshi side.

Here were told to leave our bicycles outside until we had our visas, which we did.  It’s a small building with a counter for “foreigners” right inside the door.  As we didn’t have a visa to show we were then sent to another desk nearby, given a couple of forms to fill in and told to take a seat and wait.  No photos or documentation required – just an address in Bangladesh. We had an address of someone we were staying with in Dhaka so we used that, but I would assume a hotel address would be acceptable here too.

As the only foreigners here (and I can’t imagine they get many through here) we were taken under the wing of an official who told us where to wait, checked the forms and seemed to make a few calls to get our visas processed.  After about 2 hours of hanging around, our passports where stamped with the desired Visa on Arrival (VOA), which was valid for 30 days, and we were good to go.

Cost was US$50 each, which had to be paid in cash US$.  We only had $20 and $10 notes and they asked for bigger denominations, but it wasn’t a problem when we said this was all we had (which was true!).

All our bags had to go through a scanner so we had to completely unload the bicycles. A pointless exercise really as the scanner was unmanned, but then we were free to go.

There are plenty of ATMs in Benapole so we could get cash straight away.  Although not every ATM accepts international cards, BRAC and City Bank accept MasterCard and both have machines on the main street here, which also has plenty of money changers.

There didn’t seem to be much in the way of accommodation available in Benapole, either from what we saw and our online research (possibly one hotel), so we went on to Jessore about 40km away.  There are lots of accommodation options here as well as a Grameenphone (a Bangladeshi mobile operator) Service Centre, where it was easy and pain-free to pick up a local SIM card.  All we needed was our passports and a hotel address for this.

On the whole, transiting from India to Bangladesh using this border was a pretty painless exercise.

There is a 500 Taka road tax to pay per person when departing Bangladesh.  This can be paid in advance in any Sonali Bank branch.  We paid ours in Sylhet at a designated “travel tax” counter, and we are glad did it in advance because it was one less queue to deal with at the border.  But there is a Sonali bank at the border and although we crossed on a Friday, it was open.

This crossing is not quite as well sign-posted as our entry into Bangladesh was.  Our first checkpoint was the Bangladeshi border guard who took our passports, wrote something in a book and then returned our passports.

Next we had to go to customs to get a stamp on our travel tax paperwork.

From there we went to a Bangladesh immigration office, leaving our bikes outside,  where we had to fill out a form and a special book for foreigners.  A bit of a scrum in a small room with about 25 others, but we made ourselves visible to the officials behind the desk so we got our forms and the book passed to us pretty promptly. When we had completed our paperwork we were dealt with pretty swiftly and got the exit stamp in our passports. The only difficulty we had was finding our visa number, which we think was the number written above the VOA stamp in our passports.   We used that and no one questioned it, although it did seem to be a different format from what other foreigners had filled out in the book.  Saying that, there didn’t appear to be a standard format in the book either!

Bangladesh done, we proceeded to Indian immigration, where a border guard checked our Indian visas and directed us towards the immigration office.  We wheeled our bikes in and left them against a side wall.  There are 2 queues – one for customs and one for immigration so we joined the one for immigration.  The border guard at the door who saw us come in, directed us to the front of the queue and a senior looking official took us into an office, gave us a form to complete and then he filled out a ledger from the details in that form.

All done, we were taken back to the front of the queue (white western privileges, which was a bit embarrassing!) and the 2 ladies at the immigration counter, took our photos and processed our visas. We had one heart-stopping moment when it appeared that the visas hadnt been put into the system at Dhaka where they had been issued, but the ladies here manually entered the details and gave us the stamp in our passports. Collected our bikes and wheeled them down a ramp and we were in India again!

There is an unmanned foreign exchange counter at the exit, and a few metres outside the building there were other money changing offices.  Even further on there were plenty of ATMs as Agartala is the capital city of the state of Tripura.  There is also a Big Bazar department store in the centre of town, which is a useful stop for stocking up on provisions!