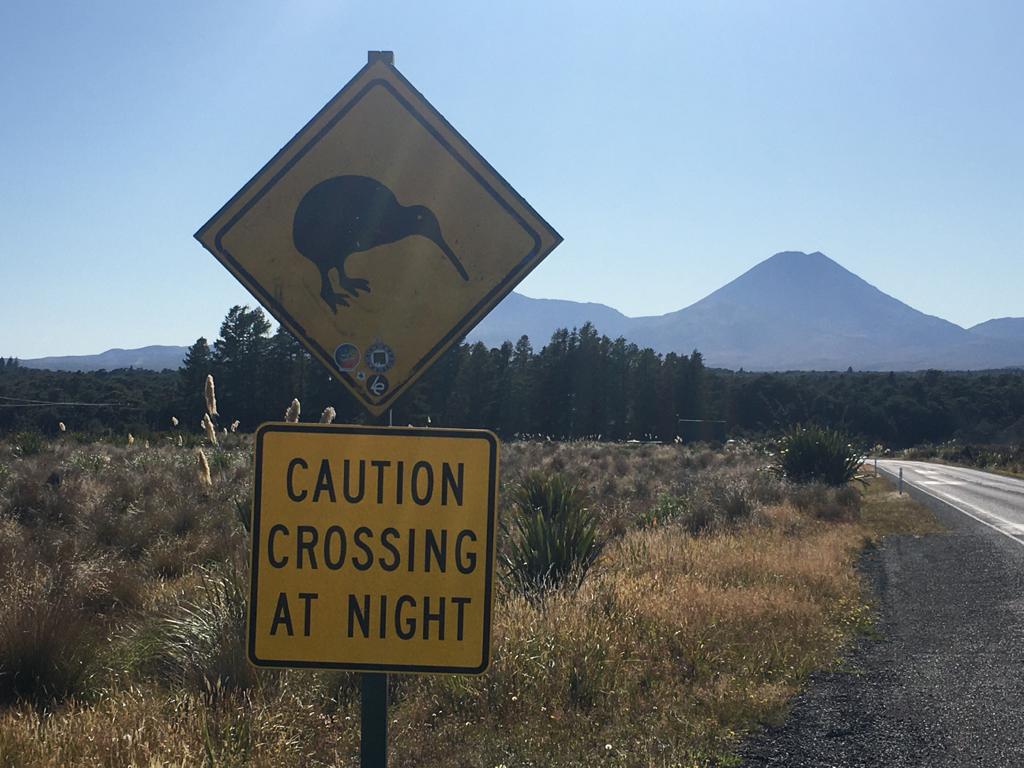 Though our time in New Zealand was cut slightly short we were still there for nearly 3 months and in that time cycled 1,917km on the South Island and 1,334km on the North Island. It is an expensive county and for us it was up there with Norway as one of the most expensive countries of our trip.  But we enjoyed it a lot!  Here  are some observations from our time there…

– The quality of the road surfaces were  generally good though once we got off the main roads they often changed quickly to gravel. Our bikes are okay on gravel and tracks for short periods, but if we were to go back to New Zealand we’d probably bring mountain bikes as there are a lot of trails that we weren’t able to go on this time.  Most of the other cyclists we saw were on mountain bikes.

– On that note, there is a huge number of cyclists on the roads during the summer – we saw more cyclists in the first 10 days in New Zealand than we saw on entire trip up until that point!

– The standard of Kiwi driving is, at times, pretty shocking! There’s a lot of traffic as everyone seems to have a car and there’s not much public transport. There are also comparatively few roads to accommodate this  large volume of traffic and there were very few occasions when we felt we could truly ‘get away from it all’.  This is where mountain bikes would have helped to get us off the roads. The truck drivers in particular are very aggressive and appear to think that they own the roads. We had quite a few incidents when a truck would get far too close to us when it was completely unnecessary.  It did however alert me to the fact that Martina has an extensive collection of swear words that she can call on!

– There were a huge number of tourists in the country,  most of which were European (from our experience they were mainly from France, Germany, the Netherlands and Spain).  Many of them buy camper vans, mini vans or people carriers with a bed in the back, use them for a few months and then sell them on. The vans in question tend to be very old and not necessarily good for the environment with the amount of fumes they tend to expel!  The ones in the photo below were actually some of the newer ones…

– Freedom camping (or wild/bush camping) i.e. just stopping somewhere at the end of the day to set up camp, has become so popular in New Zealand that the government, through the Department of Conservation (DoC), has designated specific places for people to freedom camp. It means it is then often illegal to camp elsewhere so these freedom camping sites  get very crowded and cramped. The whole idea of freedom camping, to us, is to be out in the wilds with no one else around, but in New Zealand this was never the case, which unfortunately rather spoiled the whole experience for us.

And the lesser seen…

Notice how tents are still not allowed even in this zone, which meant freedom camping was quite difficult for us.

– Unlike in Australia there were plenty of old-style caravans on the road, similar to what we wouldn’t see in the U.K. These were usually owned by locals and nearly always very well looked after…

– Because there is an active earthquake and tsunami threat in New Zealand there are tsunami warning signs all along the coasts. We saw a few of these in campsites and some main roads even had lines painted on them to indicate the level above which was safe from a tsunami. Some beaches also had these signs showing escape routes….

– Manchester isn’t just a place as we know it! Its the word Kiwis use for bed linen, which apparently comes from where it was once produced…

– We were advised to try a couple of New Zealand’s favourite food…first up was Hokey Pokey ice cream, which from what we could tell was vanilla ice cream with honeycomb – very tasty! Second was Pineapple Lumps which are pineapple flavour soft sugary sweets covered in chocolate – not our favourite I’m afraid. In general,   sweets/candy is referred to as “lollies”.

– Many of the buses have bike racks on the front, which we think I a great idea and not something we’ve seen before…

– Post boxes outside houses are almost as good as the ones we saw in Australia! Of all the ones we saw, an old microwave oven was by far the most popular, but this one was my particular favourite for obvious reasons…

– Despite all the traffic on the road, surprisingly vehicle insurance isn’t obligatory.

– Lots of people walk barefoot on the streets. This is a choice rather than them not being able to afford shoes!

– We saw quite a few hitchhikers, which is now quite rare in the U.K. and not something we’ve seen much of elsewhere in the world.

– When a Kiwi says ‘yes’ it sounds like  ‘yiz’ – quite different to the Aussie accent and is how we could always tell if we were speaking to a local! ‘Deck’ sounds like ‘dick’ and ‘six’ sounds like ‘sex’!

– Kiwis are very laid back and tend not to gush about something they like – even if they loved it!  For example  after a meal if someone says “that wasn’t bad”, they really mean “that was really nice”.  If they say “that wasn’t bad at all” it means it was very good.  You wouldn’t want to be sensitive or looking for too many compliments from that lot!

–  When a Kiwi says ‘the other day’, you should really clarify what they mean as apparently it could be any time in the last year!

– There are more Maoris on the North Island than on South.  From what we saw, they also appeared to be far more integrated into society than the First People in Australia.

– We saw lots of deer farms throughout the countryside as well as flocks of turkeys along the side of the road.  We couldn’t figure out if the turkeys were farmed or wild, but it was quite an unusual sighting to come across a couple of times a day.

– Kiwis are very pro-New Zealand produce and services.  Some people that we stayed with are upset that their favourite ice cream brand, Tip Top, is now owned by an Australian company!  And so is one of their main high street banks.

As was the case in Australia, despite the fact that we are all native English speakers there were quite a few words in their vocabulary that were new to us.  Here  are some Kiwi to Lifecycler translations that we had to deal with:

Whoever said English was a universal language wasn’t entirely correct!